Enhancements at LAX: New Gate Numbers, and the Eagle’s Nest Gets a “New Terminal”

For as long as this author can remember, flights under the American Eagle regional brand have always left from a satellite building at LAX that required a bus, which departed from a bus stop at Terminal 4 (T4) marked as ’œGate 44’ and headed toward towards a separate, remote satellite building housing a group of gates marked as Gate 44 with different letters. Even when the previous building was demolished and Eagle moved its operation to another building at the other end of the airfield, this Gate 44 scheme remained in use. Not a great system, but it worked since AA occupied T4 and LAX’s gate numbering convention was based on the terminal number (e.g., Gates 40-49 are in Terminal 4; Gates 60-69 are in Terminal 6). 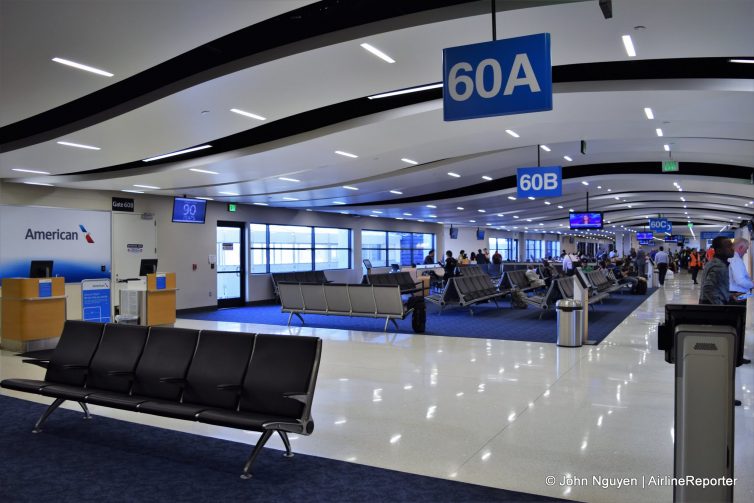 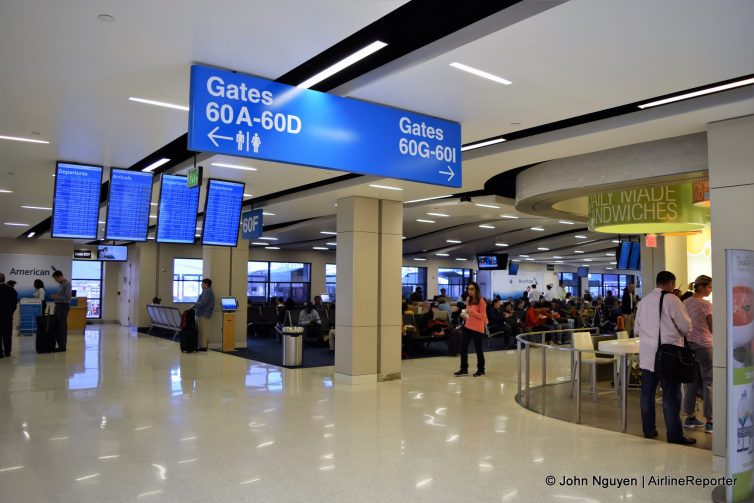 When AA merged with US Airways, they inherited some real estate (gates and check-in counters) at Terminal 6 (T6) that ended up being underutilized. To relieve the congestion at T4, AA took a lesson from Psychology 101 and renumbered the Eagle’s Nest gates from 44A-I to 60A-I, to encourage passengers departing on Eagle to head over to T6, where check-in for the regional flights are now located. Additionally, the baggage claim for arriving Eagle passengers is relocated to T6. 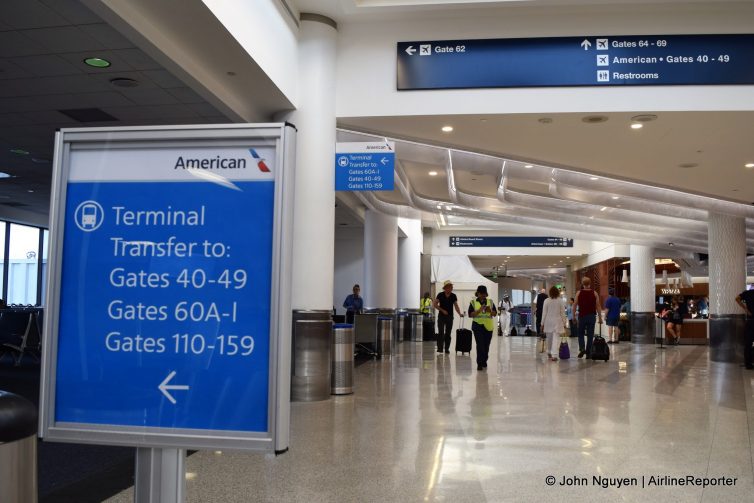 American estimates that this move will reduce the number of passengers going through T4 by 3,000-6,000 daily over the summer. To aid in the transition, the airline held an informational session last week for local travel providers to brief them on the terminal changes. “Having customers dropped off at the correct terminal is key to a successful transition and so working with ground transport providers was imperative,’ pointed out Polly Tracey, an AA representative at LAX. ’œApparently this is the first time to [the drivers’] knowledge that an airline has held such an event/presentation, and they were genuinely grateful for the approach.’

Customers who had installed the airline’s mobile app were notified of the gate changes at LAX through an update, and those checking in online will see an onscreen message outlining the new gate numbers. 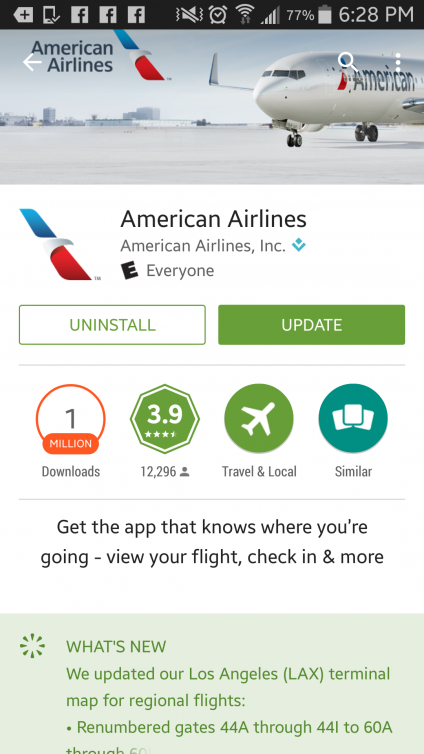 Screenshot of the AA app update for Android on Google Play

BONUS: Opinion: LAX Story – Why the Terminal 4 Connector Matters to You

Shuttles between T4 and the Eagle’s Nest remain for connecting passengers, as do buses to connect T4 and T6. An airside walking path is also available between the terminals, but Gates 60A-I are only accessible by shuttle bus. All the shuttles at T6 now depart from a door between Gates 60 and 62; the T4 stop remains in the same location and has been lightly refurbished with new carpeting and additional seating. 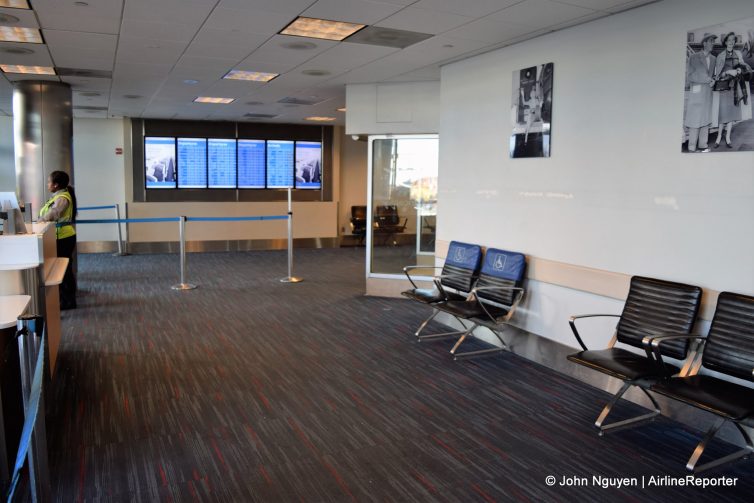 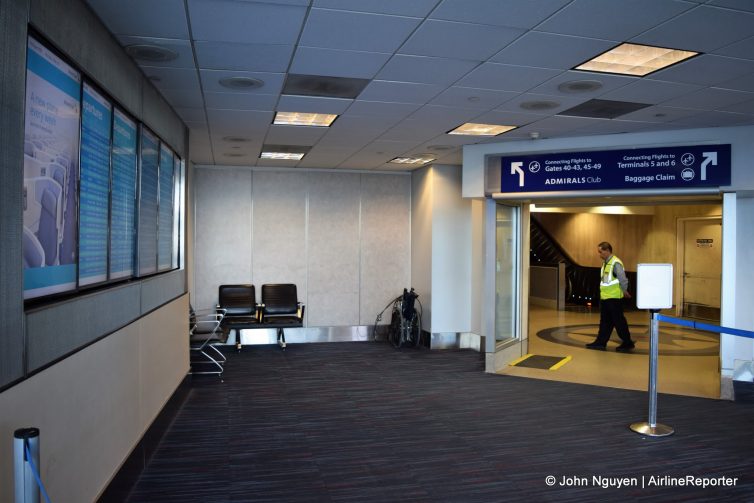 To assist in the change, ’œambassadors’ wearing neon-yellow vests will be present at peak times to help guide passengers to the right direction, assist with bags, and proactively render assistance should a passenger look like they may need it. It’s worth noting that passengers who are unable to walk up and down stairs at T6 must request wheelchair assistance; while T4 has escalators and an elevator, access to the bus on the ramp is much more tricky at this gate.  The Eagle terminal is at ground level.

While passengers departing on, arriving from, or connecting to/from Eagle flights still have to build in extra time, T6 is physically closer in proximity to the Eagle gates, and transfer time should be significantly reduced. The main source of delays in travel times are ground vehicles having to yield to actively moving aircraft, and T6’s location effectively halves the number of aircraft crossings the shuttle bus has to make. 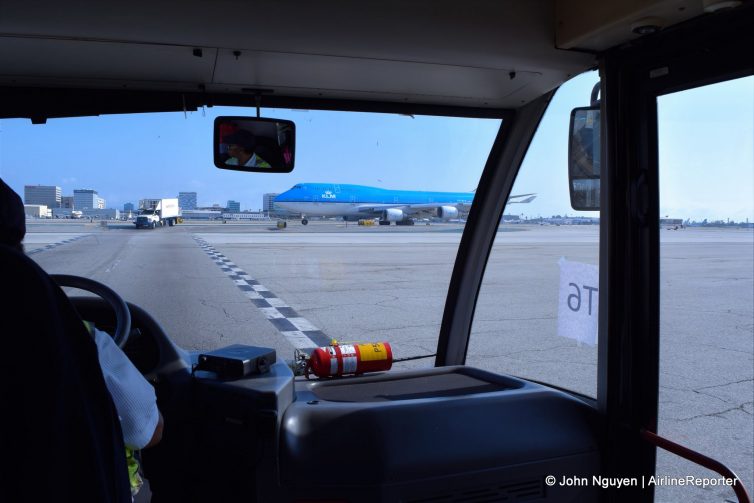 On the shuttle bus from American’s regional terminal to Terminal 6 at LAX. Look out… big bird crossing ahead!

And speaking of the buses, American has ordered new shuttle buses to replace their aging fleet at LAX, and they are due in the next few months.

Besides the gate renumbering at the Nest, there was also some minor renumbering at T4 to accommodate a new gate that has been installed to increase operational capacity.

Enhancements at LAX: Some 767s Will Move to T6

Along with the regional flights, American intends to start flying some flights flown on its larger 767-300ERs out of widebody-capable gates in T6, which would further shift passenger traffic from T4. Typically, the 767s fly to/from Dallas, Miami, and Hawaii.

Enhancements at LAX: AA Gets a Makeover; T6 Gets an Overhaul

Also overnight, workers removed all remaining vestiges of American’s and US Airways’ previous branding and updated the gate areas throughout the airport to the new standard. These include gate counters, kiosks, backboards, and gate signs. New passenger work stations, power outlets, and USB charging ports were also added throughout T4. 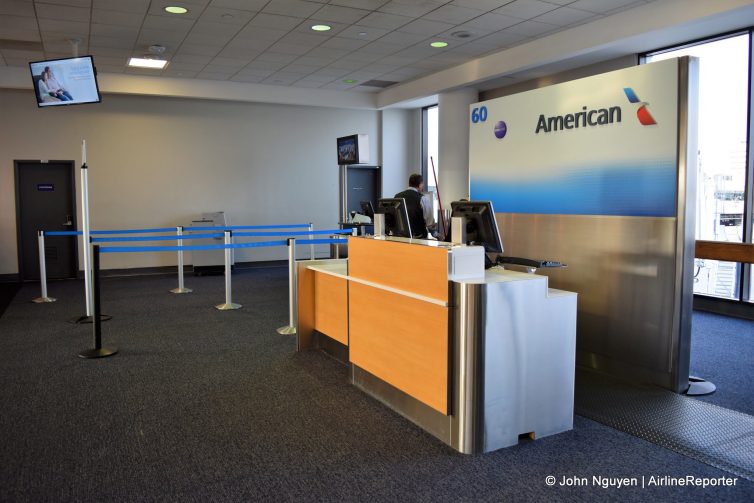 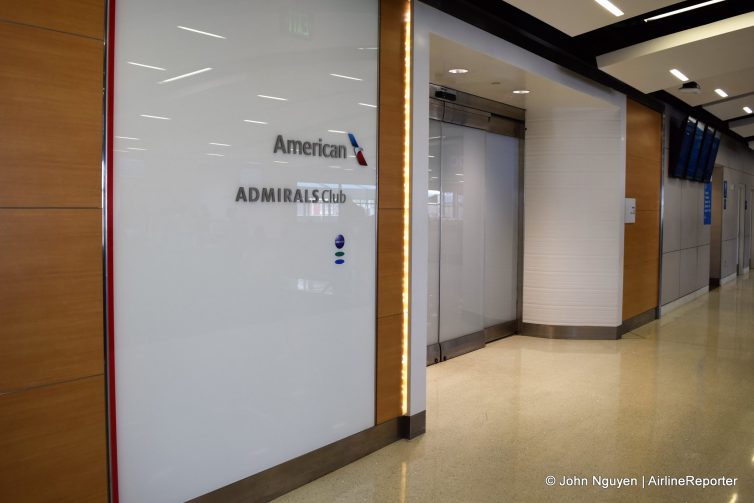 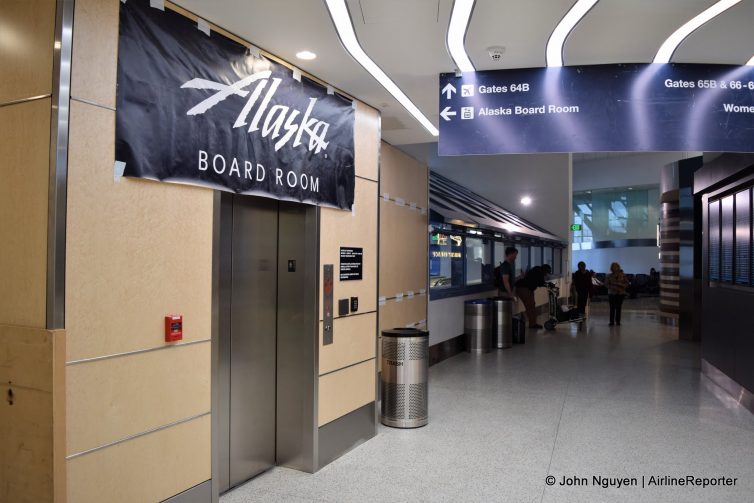 Entrance to the Alaska Board Room (soon to be renamed the Alaska Lounge) inside LAX Terminal 6; temporary sign due to construction work in the terminal

T6 itself is has ongoing renovations as part of LAX’s master modernization plan, which included building a new international terminal and connecting it behind security to T4. While some construction work is yet to be complete, new retail and dining has opened, replacing the previous dungeon-like appeal. 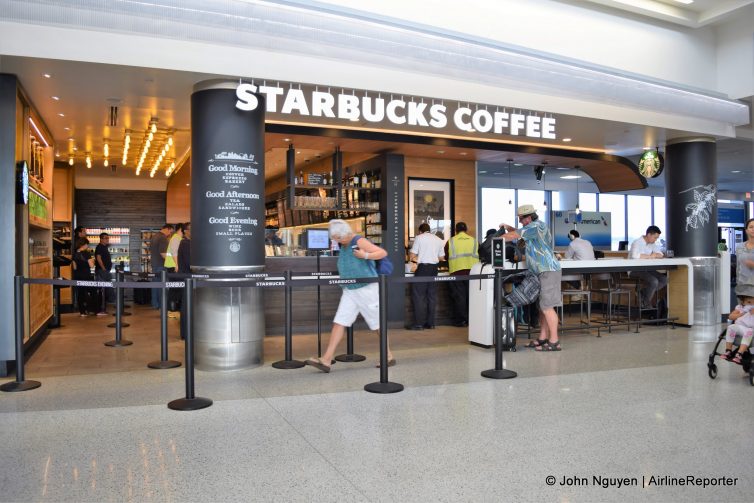 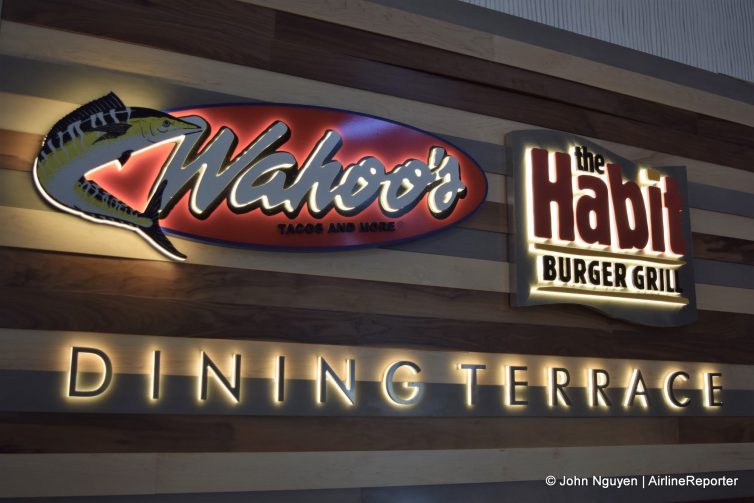 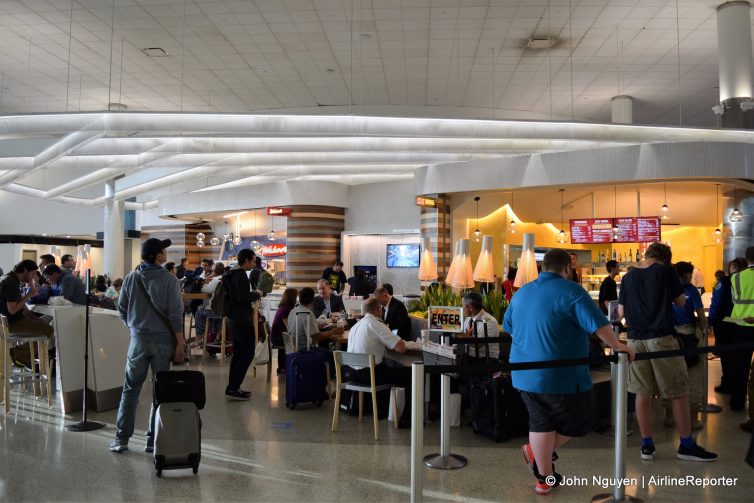 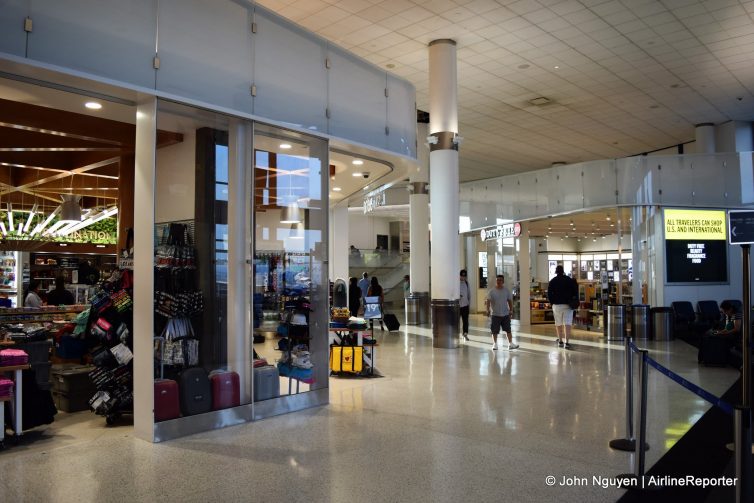 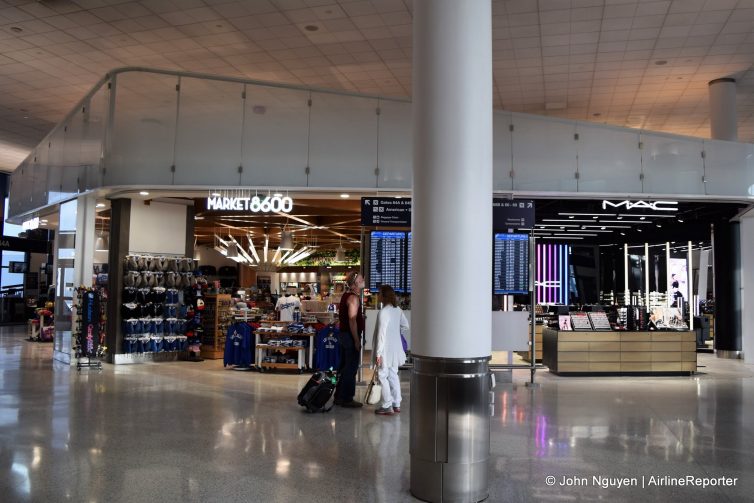 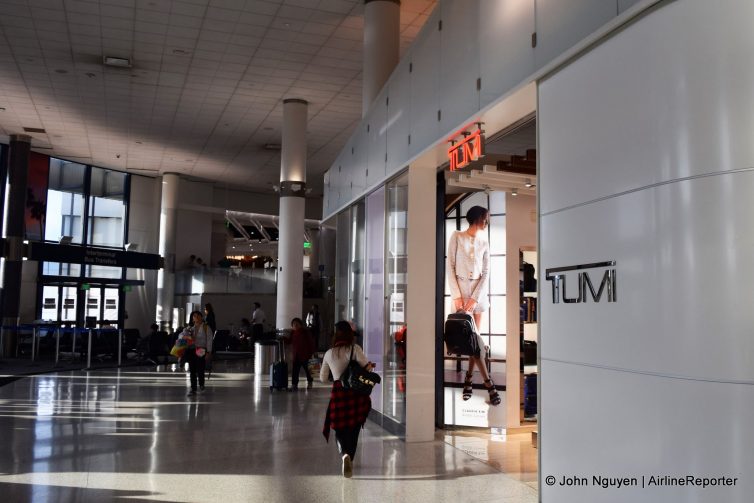 It’s not hard to imagine the operational challenges for a major airline at one of its busiest locations that’s been split into two separate, non-adjacent terminals (three if you include part-time use of the Tom Bradley International Terminal). With Delta Air Lines occupying Terminal 5 for the foreseeable future and little other precious real estate available at LAX, American had to adapt to the situation. Overall, these changes are smart moves by American to streamline their operations. It alleviates crowding issues by rebalancing traffic flow, and enhances passenger experience by making it easier for Eagle passengers to get to their flight, as well as giving everyone a little more breathing space and access to a soon-to-be fancy T6’¦

’¦ just in time for AA to launch new nonstop flights to 12 new domestic destinations in the first week of June, followed by service to Auckland on June 23.

I can remember when the satellite terminal was for United Express. I think the gates were numbered 70X. It wasn’t as nice as America has made it. Certainly no United Club!

AA definitely did the right thing dedicating some space for an Admirals Club. Especially among their high-value flyers, the Eagle’s Nest went from being dreaded to at least a halfway-decent place to wait for a regional flight.

Thanks for the informative and well written article!

It”s perfect time to make a few plans for the longer term and it is time to be happy.
I have read this put up and if I may just I desire to recommend you few attention-grabbing issues or advice.
Maybe you could write subsequent articles regarding this article.

I desire to learn even more things approximately it!

LAX improvements will continue to come, so be assured that we’ll be there for major announcements and developments!

1. The Eagle flights used to operate from T4 gates, closer to the terminal building.
2. Writing that DL will be in T5 “for the foreseeable future” is misleading at best and sloppy and inaccurate at worst. DL signed a Letter of Intent with Los Angeles World Airports (LAWA) and the City of LA to rehabilitate T2 and T3 and relocate its operations. The agreement is subject to approval by the LAWA board of airport commissioners and the LA city council.

I believe you’re talking about the previous building that I had mentioned, which was located between the old TBIT and the maintenance hangars and had to be demolished to make way for TBIT expansion. While the building was physically closer to Terminal 4, it literally only had gates, seats, and one kiosk selling snacks/drinks, sundries, newspapers/magazines, and I believe some takeaway salads/sandwiches. Most passengers probably would not rate that old building comfortable by any means.

In re: DL staying at T5, as you pointed out all they have is a letter of intent, which does not obligate them to do anything. Even if everything went smoothly with no hindrances, after airlines are shuffled around terminals renovated, and DL operations are moved, it would be several years. Realistically, considering all the steps required, including environmental studies, construction bids, debate before the LA City Council (and rarely do things get approved easily before the City Council), and all the lawsuits from local residents that will inevitably be filed, (all steps where the move could be killed), and I would stand my assertion that DL is staying in T5 “for the foreseeable future” as accurate.

1. No, I was not talking about the previous Eagle building. In its early days, Eagle flights operated from the main T4 building.

2. You’re welcome to reject the facts and define your own terms. But if you don’t think DL is moving, that’s on you. The issue remains that DL’s move was not mentioned in the story.

I remember this as well. Don’t remember which gate it was, but in 1998 I flew Eagle between LAX and SAN and they had several Saab 340s parked in the space of one or two gates, we walked down onto the ramp and onto the plane. Delta Connection did the same at Terminal 6.