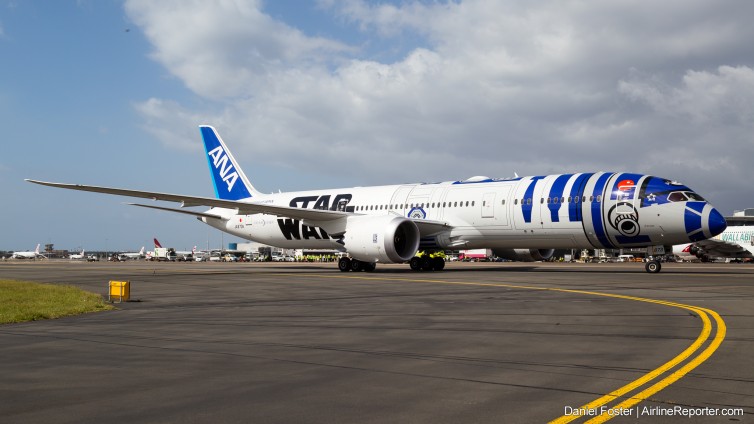 As is customary for an inaugural flight, the plane taxied to the gate and received a water cannon salute from the aerodrome fire services. 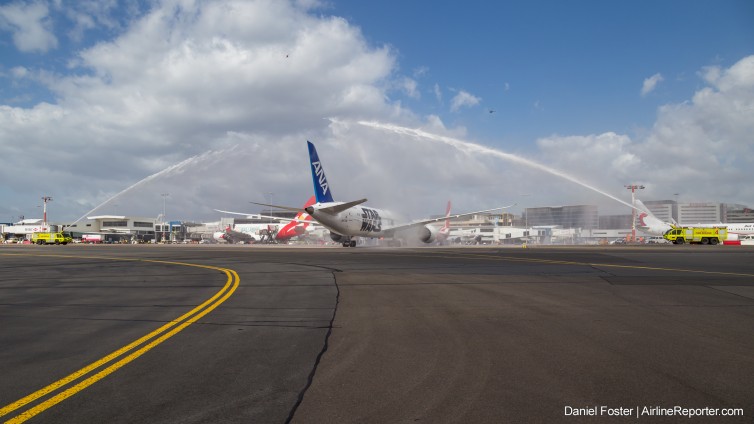 Other, arguably more important, points were centred on the growing tourism and trade between Australia and Japan leading to the potential of ANA to bring an additional 36,000 visitors to Sydney each year.

The scheduling of the flight from Sydney to Tokyo arrives at Haneda at 5:00 am, allowing passengers to get a same-day connecting flight if they desire.

One of the gifts to be exchanged, a model ANA Star Wars Dreamliner

The celebratory cake for the inaugural flight

An assortment of tools involved in the ”Kagami-Biraki” Ceremony, where the lid of a barrel of Sake is cracked open with wooden mallets, and the sake.

Shortly after the press conference concluded, the Kagami-Biraki ceremony started. This involved cracking open a barrel of sake and sharing it around the room (in R2-D2 themed cups, naturally). Along with this was the cutting of the cake and exchanging of the gifts, during which we were treated to a performance by a Koto ensemble. 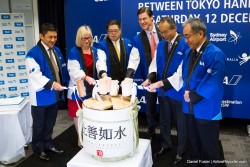 The Koto ensemble performs as the press conference comes to an end.

After half an hour we were back on the media bus for another adventure down to ’œBay 1’ where the Dreamliner was parked. The first thing I noticed was the extremely precise work performed to paint this aircraft into the livery which has been a talking point of aviation and Star Wars enthusiasts worldwide. The aircraft is in absolutely immaculate condition on the outside. 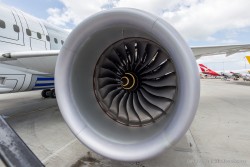 A view of the left wing and engine

As expected, the inside of the aircraft is just as well kept as the outside. The experience began with a Star Wars-themed display on entry along with the Star Wars theme music playing over the 787’s sound system. 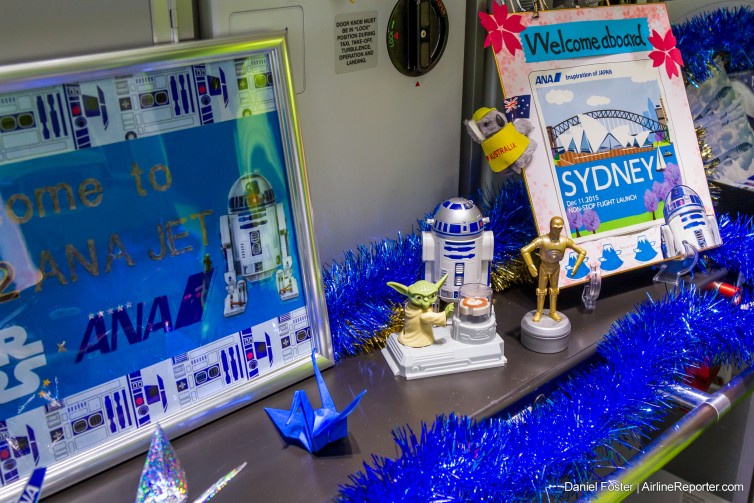 A ’œWelcome Aboard’ display greets guests as they enter the jet 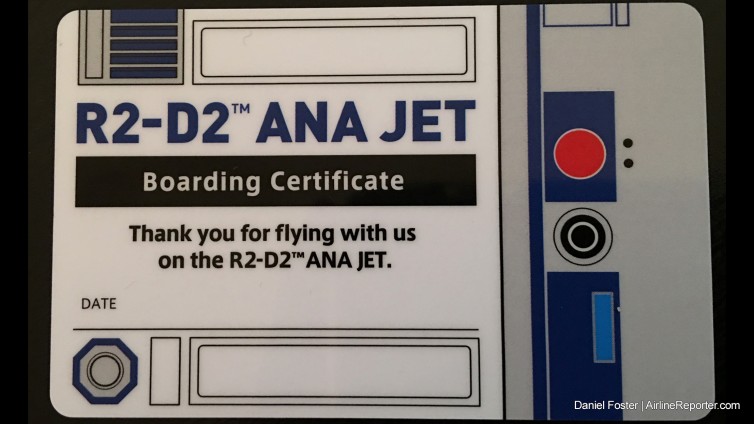 Business class on the Dreamliner features staggered seating in a 1-2-1 arrangement, allowing every passenger to have direct aisle access. Every seat has a large side table which has a reading light, a PC power port, and a USB port which interfaces with the in-flight entertainment system. 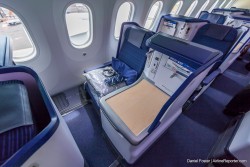 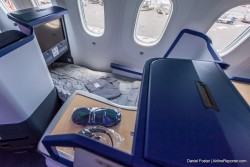 A demonstration of the lie-flat seat, along with pajamas, eye covers, and headphones. 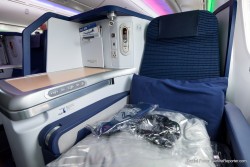 Electronic seat controls feature, including a ”Do not disturb” button.

The in-flight entertainment system features an 18-inch touch panel LCD screen. One of the biggest advantages to the business class seats is their ability to lie fully-flat. 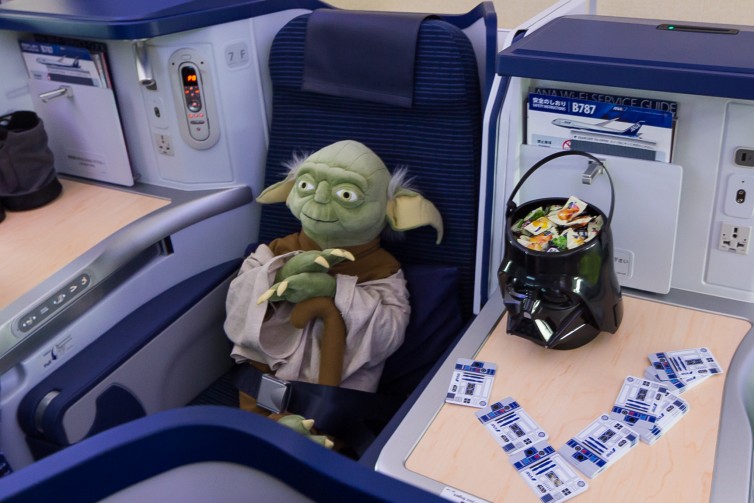 Yoda has chosen his seat wisely!

The Premium Economy section on the ANA 787-9 is a comparatively small section of the aircraft, consisting of only 21 seats arranged in three rows of seven. These seats feature leg rests and foot rests (for those behind the front row), a large table, and a universal PC power port. 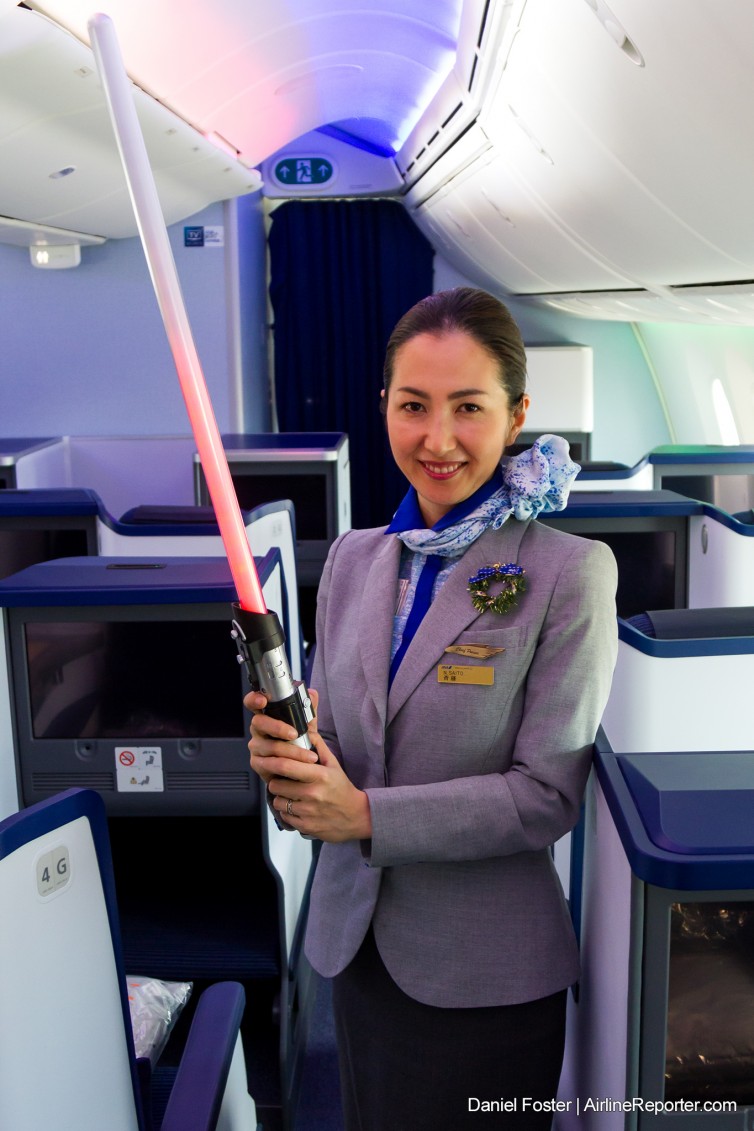 As I made further progress through the cabin, the digital window shades dimmed to make the cabin dark. Suspenseful Star Wars music came through the loudspeakers. This revealed the true beauty of Boeing’s ’œSky’ Interior. A seemingly pre-programmed lightshow commenced in unison with the music. The colors of the ceiling flashed a variety of colors as the music played. 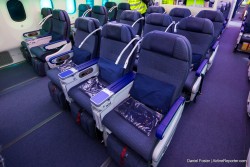 Red and Blue signifying the light and dark side of the force. R2D2 Seat covers make a nice touch.

A nice touch by ANA has been to include the R2-D2 headrest covers in the economy cabin. When you see them, you truly know that you are aboard the ’œStar Wars Jet’. As with the Premium and Business cabins, every economy seat also includes a PC power port along with a USB port. 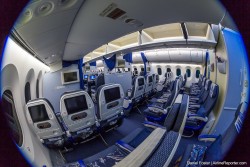 Looking forward over the economy cabin

Not only is it a pleasure to see ANA serving Sydney once again, but electing to use the Star Wars Dreamliner for the inaugural service was a pleasant surprise. 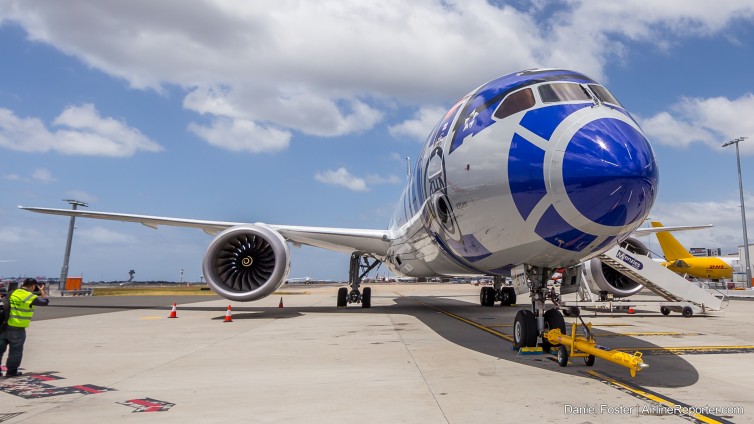 If I plan a trip to Japan, the ANA 787-9 is definitely one of my preferences for getting there. Maybe I’ll be lucky and get the Star Wars jet, who knows?

Story written by Daniel Foster for AirlineReporter. Daniel is an avid aviation enthusiast, photographer, and holds a commercial pilots license. He is currently pursuing his passion for a career in aviation whilst completing a software engineering degree at university.

Don’t know if flying something associated with the Rebel Alliance through southeast Asian airspace is a good idea. You wouldn’t want to attract any Thai fighters.