Last August, AirlineReporter brought exclusive coverage of TWA Wings of Pride’s arrival to Kansas City. Today we bring you another first. A time-lapse of N948TW being transformed from the standard American Airlines bare metal scheme back to its more popular and beloved livery: the inverted TWA double stripe.

Why inverted? Because when TWA received the plane – as a gift from its employees – they wanted a livery that said to the employees and public alike: TWA was reinventing itself from the inside out. 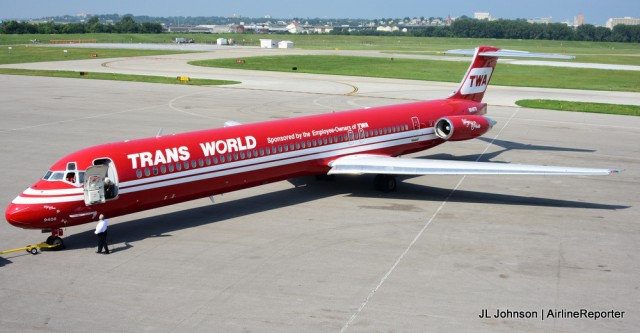 The TWA Wings of Pride

What’s next for TWA Wings of Pride?

In August, TriStar Experience shared that they intended to use TWA Wings of Pride for STEM (science, technology, education, math) educational programs. As of October of 2015, the all-volunteer organization has fulfilled that commitment through partnership with other non-profits supporting various young adult programs.

The plane is being maintained in air-worthy condition and the organization is eyeing the possibility of flight-based programs. With operational jet aircraft, TriStar can also support the charitable missions of other non-profits needing access to air travel. While the organization has so far delivered on all of its promises, it is not yet commenting on timelines for flight programs, which one could speculate might include honor flights. 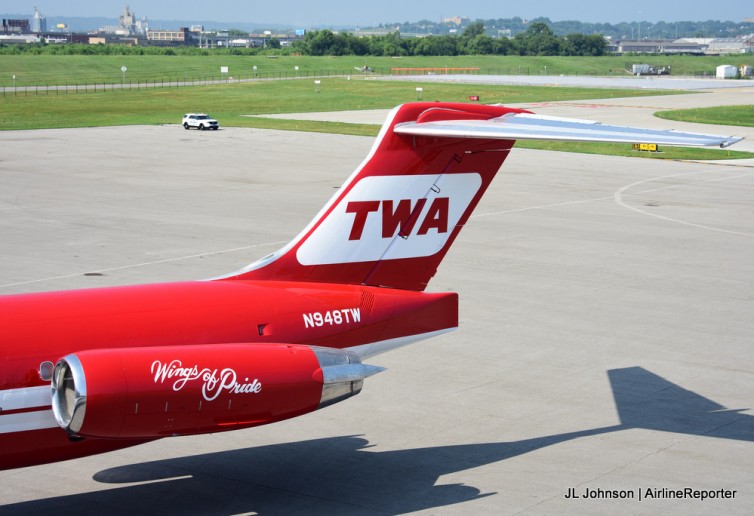 TriStar is a late entrant to the KC-based aviation non-profit market, which is becoming crowded. Other key players include the National Airline History Museum and TWA Museum, all three operating separately, with a presence at the small downtown KC airport, MKC. However, TriStar has made considerable progress in the few years they have been in operation.

In addition to TWA Wings of Pride, TriStar also has a BAC 1-11 and an L-1011. Neither are accessible to the public just yet, but the organization intends to use the success of WoP’s programs as a springboard for continued growth.

Bye bye:( Our AA 727 today begins a trip to a new home at another museum in Kansas City. pic.twitter.com/qRLcl81KOI

With TriStar’s growth and success, can we then assume that they might be the mystery Kansas City-based entity to receive the Museum of Flight’s second 727? The National Airline History Museum denied knowledge of the plane’s future at KC, and with the 727 serving its entire life with American Airlines, it isn’t a likely fit for the TWA Museum. For the moment, there remain many open questions, but one thing is for sure. It’s an exciting time to be a KC-based AvGeek.

ANA Returns to Sydney in Style with the R2-D2 Star Wars Dreamliner
Airport Passenger Facility Charges: My Thoughts on the Current Debate
6 Comments

I have been in France on of the most addict to TWA since 1969 !! flying the very first flight PARIS NEW YORK on 747 and Coronado 880 NEW YORK PITTSBURGH in 1970 !! and all the fleet later on …I used to be VIP on First class 767 to Boston many flights as well as the Business Class when first desapeared . Good initiative to let TWA again spread her wings…congratulation ….vive TWA !!

You are absolutly right and I flew the CV 880 of TWA. I wrote too quickly
Swissair was equipped with Coronado that you can visit in Luzern !!
https://www.youtube.com/watch?v=BBNcOChxEHQ

Never really realized how cutting edge the D/MD/Boeing wing aerodynamics were on the ol’ high-tail 9-series. Tips on this bird are distinctly reminiscent of the T7 and 78-series. From what I understand they were the “sports cars” of the skies – tricky, demanding and a joy to pilot. All at the same time. Thanks to the group for honouring a piece of airline, and aviation, hostly.

My first trans-atlantic flight was on a Connie. DOD charter taking service families from Frankfurt to New York. I was just a few months old – my mother has a story she tells about the trip. Seems that when they started the engines there was a lot of noise and smoke. All of the other babies on the plane promptly started having screaming fits. She says I got up in the window, banged on the glass and laughed.

I never saw a TWA plane painted red like that – they were always white or silver with red lettering. AA didn’t paint at all. They polished the aluminum and slapped decals on the planes. That paint is heavy, standard paint job adds several hundred pounds to the plane’s weight…