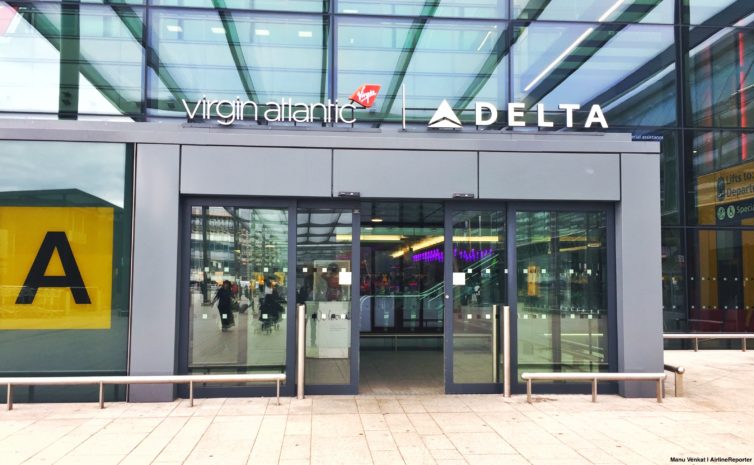 Virgin Atlantic and Delta’s London Heathrow flights depart from terminal 3, an ugly mazelike jumble of a concourse. On the bright side, passengers flying in Premium can take advantage of dedicated check-in counters. 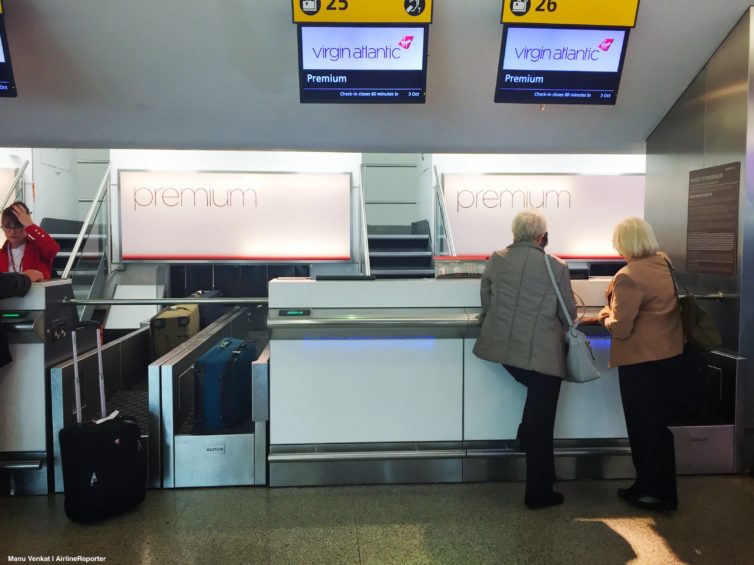 Virgin Premium doesn’t come with lounge access, so unless you have frequent flier status, Priority Pass, or some other means of lounge access, you’ll be waiting in the general concourse.

The Dreamliner taking us on the long flight to Los Angeles was lined up alongside a few of its siblings. With bold metallic reds and large plain text, the Virgin Atlantic livery is one of my favorites. 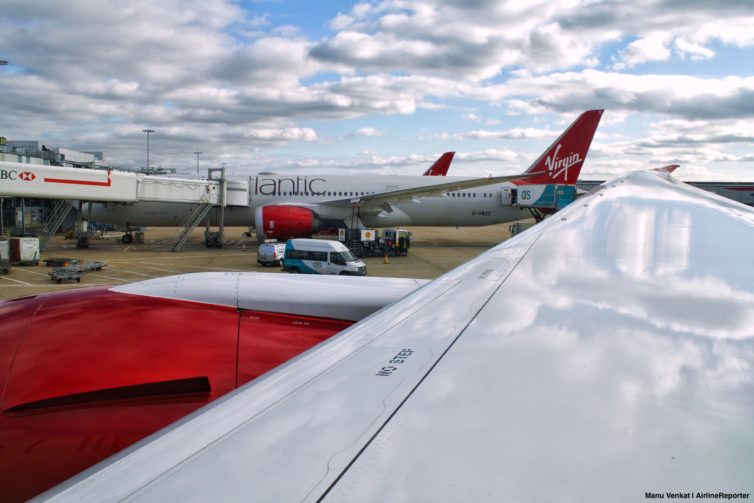 Since Boeing’s Dreamliner is relatively new, its no surprise that they’re often fitted with airlines’ freshest seats. Virgin Premium is no exception. The upholstery is a stylishly simple black leather with white plastic seat backs. Of course, there was the characteristic magenta lighting. Seats are 2-3-2 across, compared with 3-3-3 in regular economy. The two fewer seats per row meant that each premium economy seat is very wide. 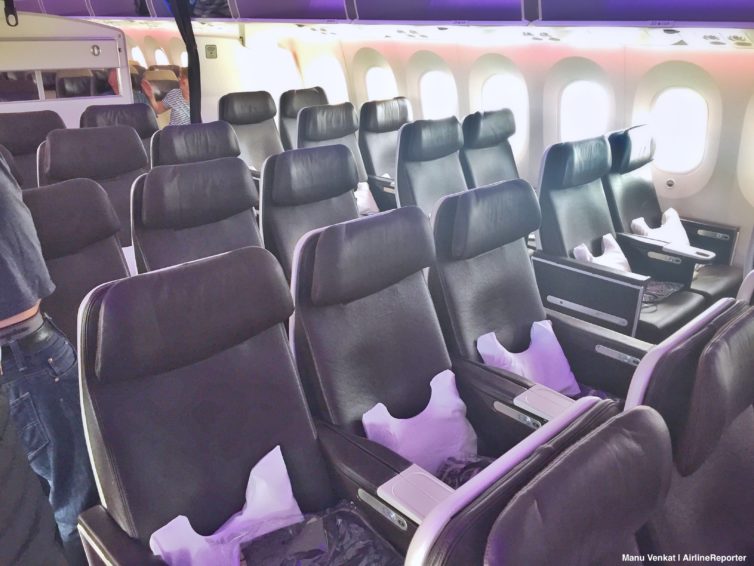 Each seat had a expandable seat-back storage pocket and a fold-down footrest. The broad consoles between each seat mean that there’s no need to battle with your neighbor for elbow room. 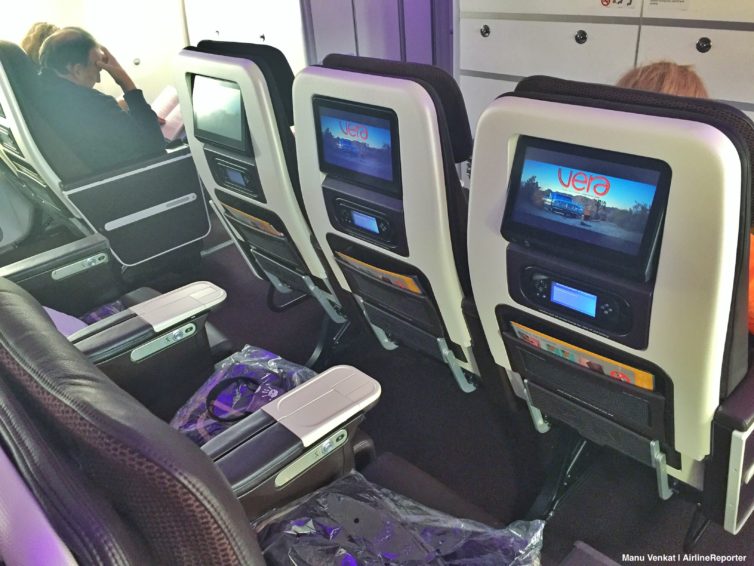 Bulkhead seats have plenty of legroom, though no storage space for takeoff or landing. 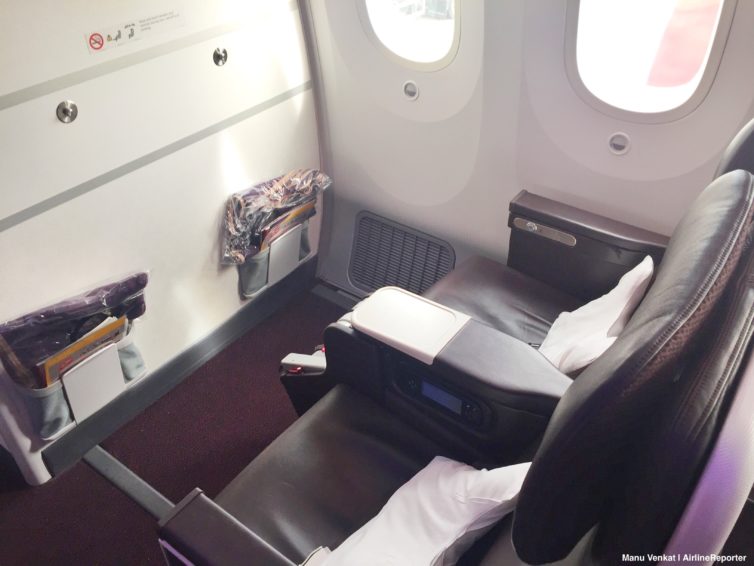 While the video screen was on the small side for premium economy, the image was sharp and the touch screen was very responsive.

Passengers were given a pillow and a blanket. The pillow was shaped to fit around your shoulders, though I honestly didn’t notice that much benefit from the creative shape. 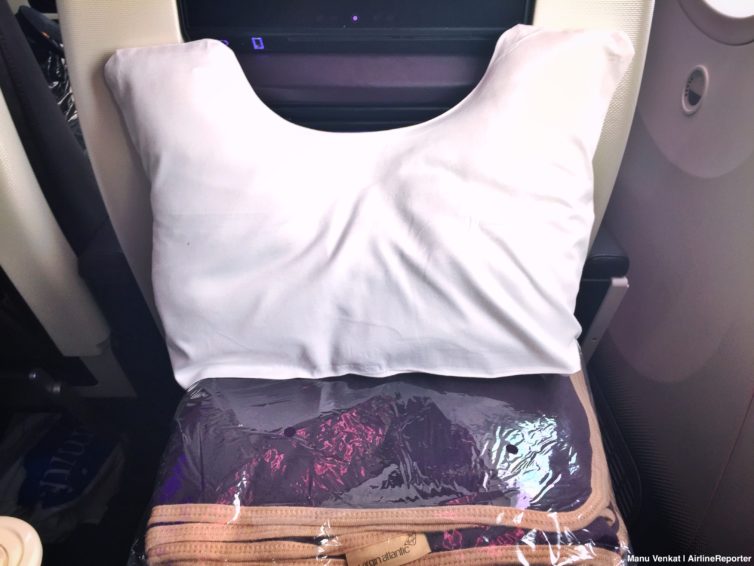 BONUS: SAS Plus – Taking the Edge Off Economy Class Travel

A cheery flight attendant came around with a tray of pre-departure drinks. I went with some water and sparkling wine. 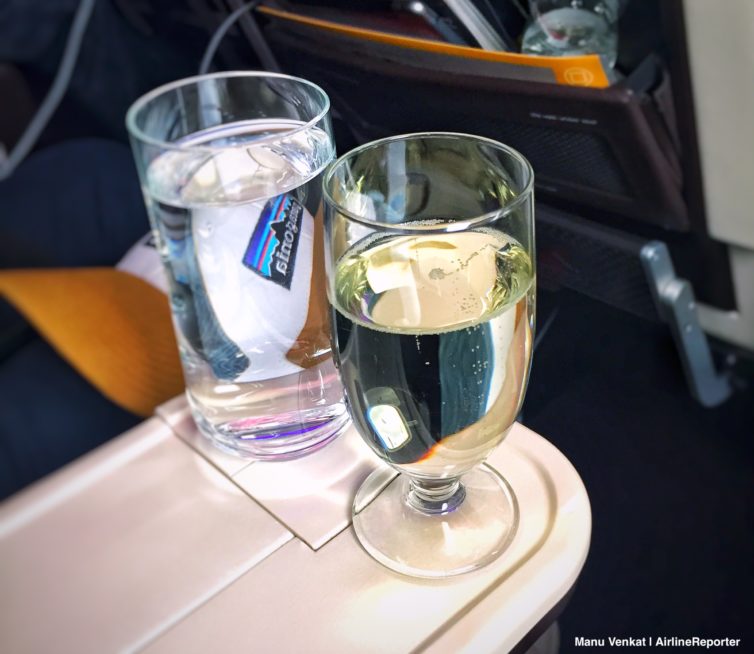 I love flying out of Heathrow because of how many airlines, countries, and flagship widebody aircraft operate there. We passed by Concorde on the way to the runway, and got a sweeping view of the British countryside after takeoff.

After the double chimes, service began with pre-meal drinks. 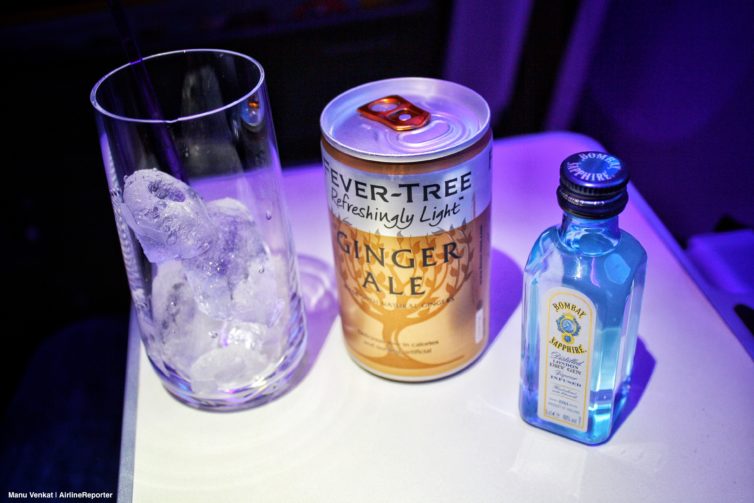 I took a moment to read over the menu. 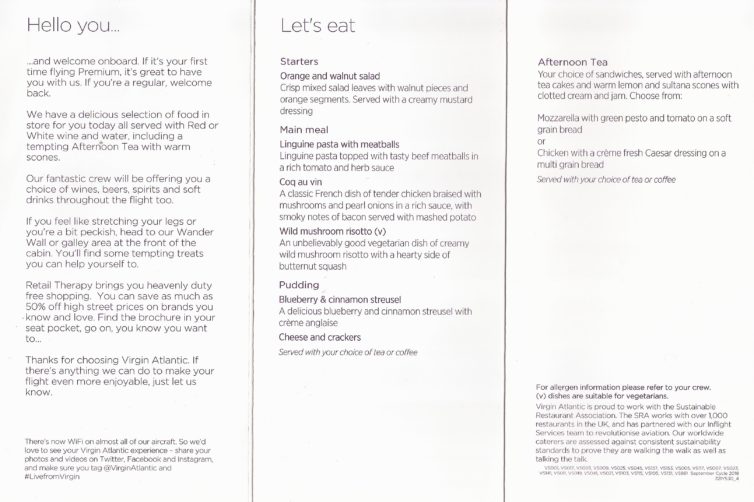 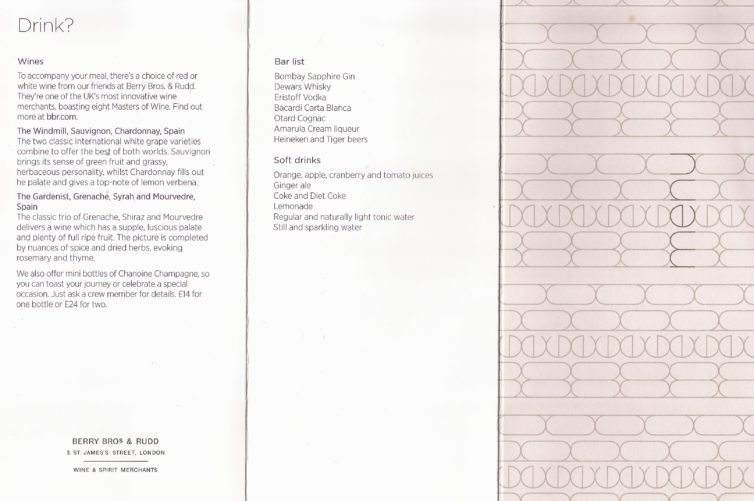 Almost 45 minutes later, I got my coq au vin along with a side salad, bread, red wine, and dessert. The salad, with its walnuts and orange slices, was better than the bland and boring salads often served on planes. The main dish was rich and flavorful. And most of all, I was impressed by how good the presentation was. Each dish was served in real ceramic plates, and drinks were in real glassware. I even got little plane-shaped salt and pepper dispensers. 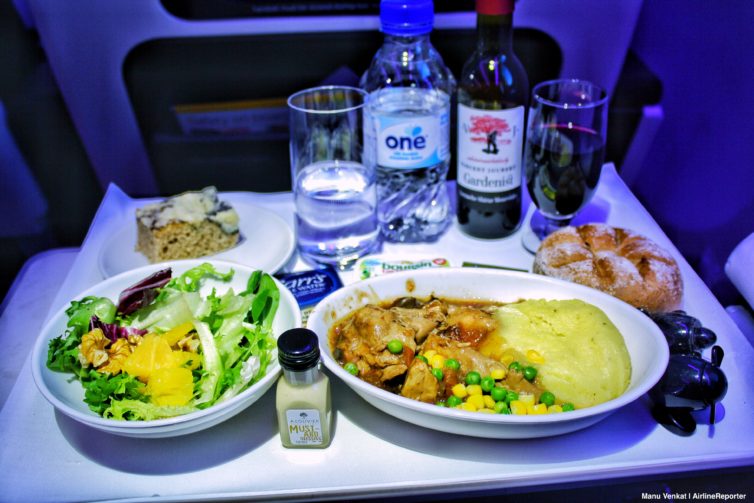 Overall it was a pretty great meal. The pace of the service was a bit slow, but I was impressed with how charming the crew on my flight was. Most importantly, the food was tasty across the board and the presentation was closer to business class than economy. 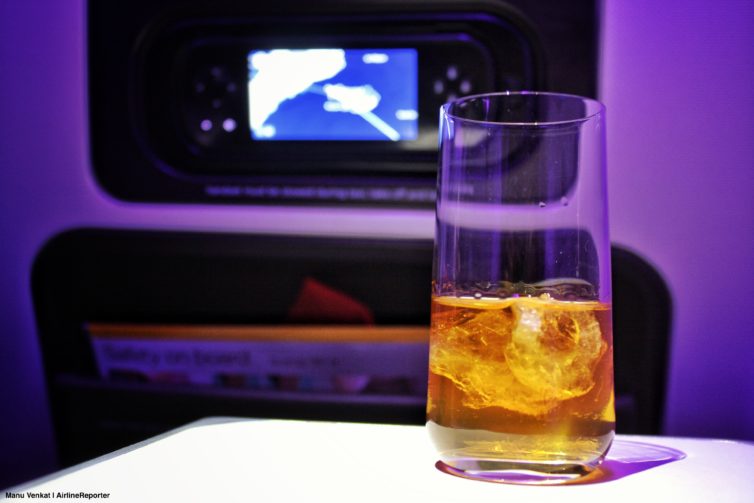 After lunch I checked out the Vera inflight entertainment system. The screen was super responsive, and I loved that you could watch a movie on the main screen while monitoring the flight tracking map on the handset below. 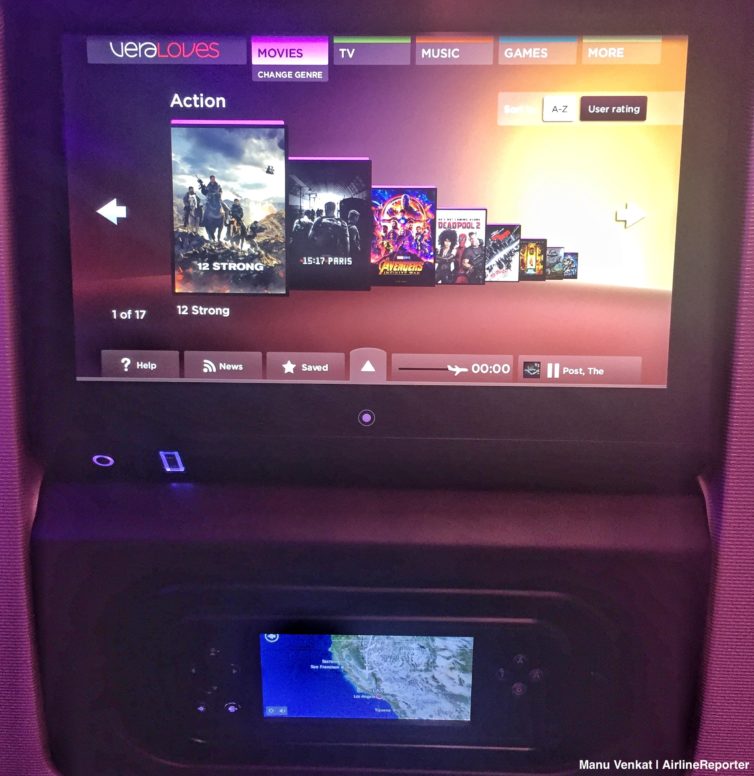 The library of movies and TV was more than sufficient to keep me entertained for a full long-haul round trip.

Wifi was available on the flight, and at reasonable rates if you didn’t need much data. But speeds were slow, and halfway through the flight it conked out entirely. I later asked for, and received, a full refund. At least the library of movies and the onslaught of snacks kept me occupied. 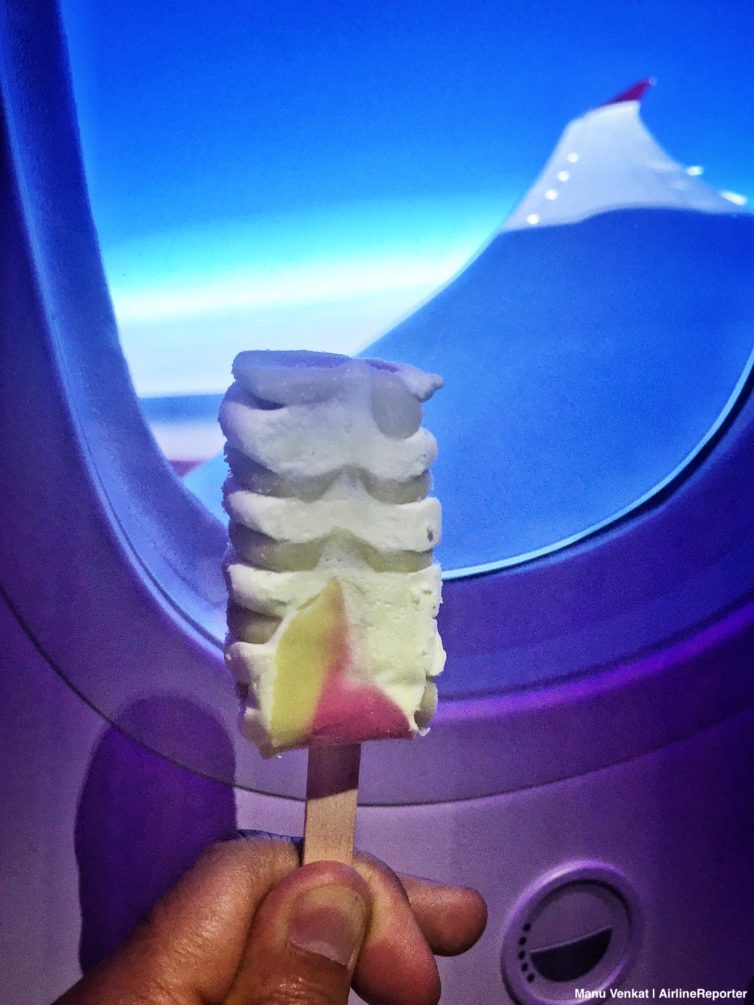 I settled in for a short nap and found that the soft seat, generous recline, and footrest made for a better sleep experience than I’m used to in economy or premium economy.

BONUS: Flying On Bubbles – Upper Class on a Virgin Atlantic A340-600

Amenity kits were available on request only. The contents were basic and the plastic bag ripped when I opened it. 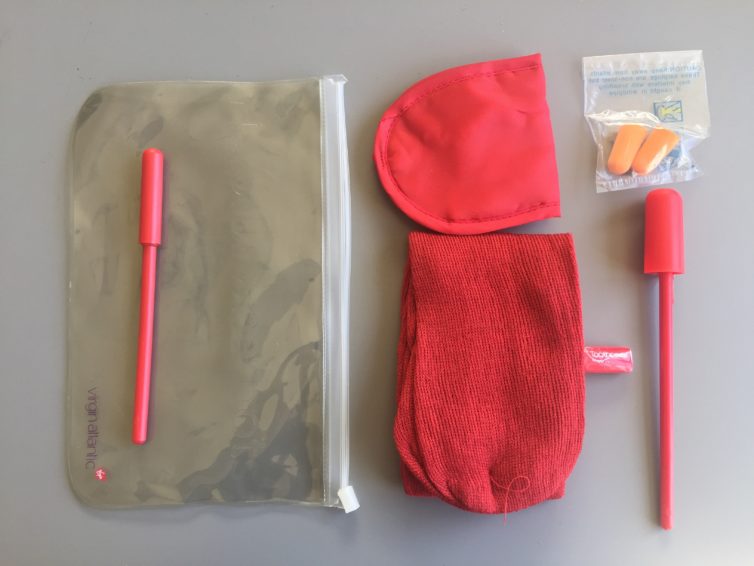 One of the signature pieces of Virgin Premium Class, at least on the Dreamliner, is the Wonderwall. Located at the very front of the Premium cabin, it’s a snazzier version of a self-serve snack shelf. Given that flight attendants didn’t make frequent water runs between meal and snack services, it was nice to have the wall on hand. 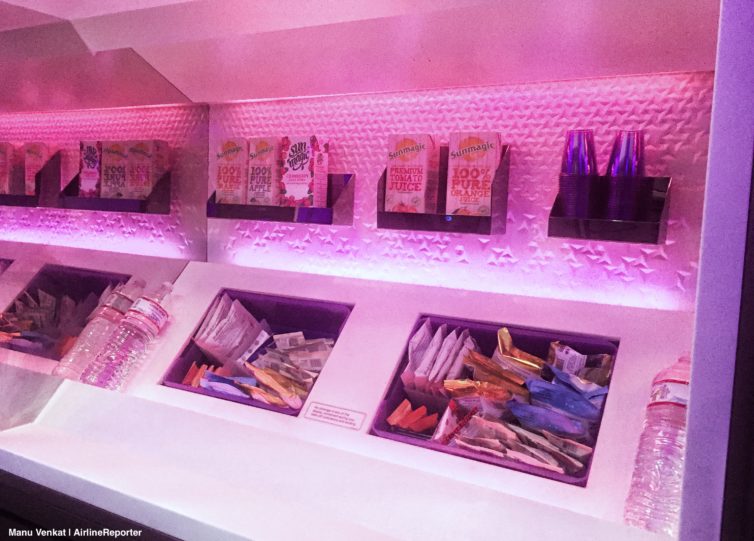 Around the middle of the flight, we were offered a meal that wasn’t listed on the menu. After the fancier first meal I was in the mood for some comfort food, and the gooey cheese, potato, tomato, and onion calzone hit the spot. 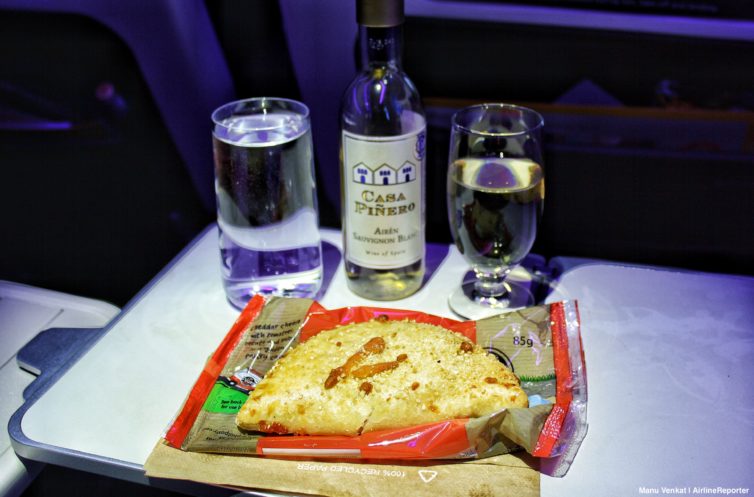 When you’re a UK-based airline you’ve gotta keep the teatime tradition going strong, and Virgin Atlantic did not disappoint. The highlight of the tea service, which was offered shortly before starting our descent, was a melt-in-your-mouth warm scone served with clotted cream and jam. I opted for chicken Caesar for the sandwich selection, which was simple but satisfying. 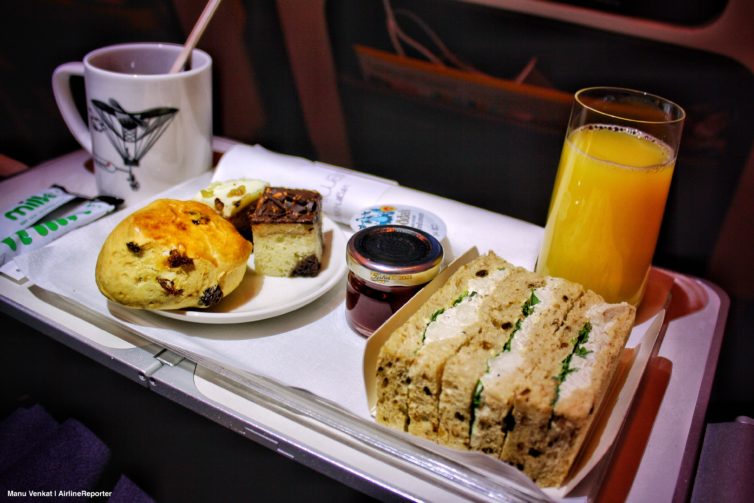 I loved the quirky artwork on the mug. 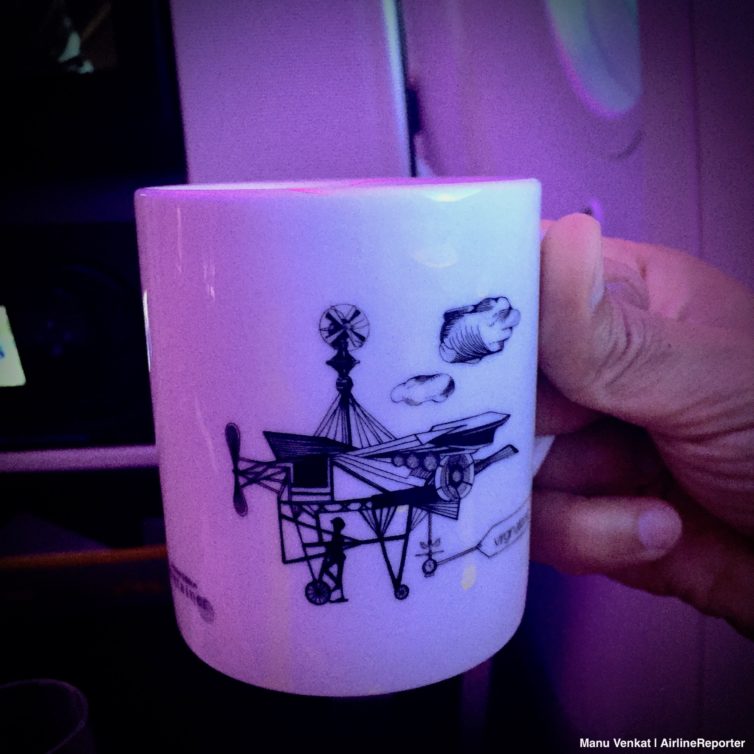 While the table settings and food quality were nearly business class quality, there was the occasional moment that reminded me that I was in premium economy. After I finished my tea, my dishes sat on my tray table for a long time and I needed to ring my call button a couple times to get them cleared. On the bright side, whenever the flight attendants did make appearances in the cabin, they were enthusiastically helpful.

We descended towards LAX just as the sun was setting, and the views were incredible. 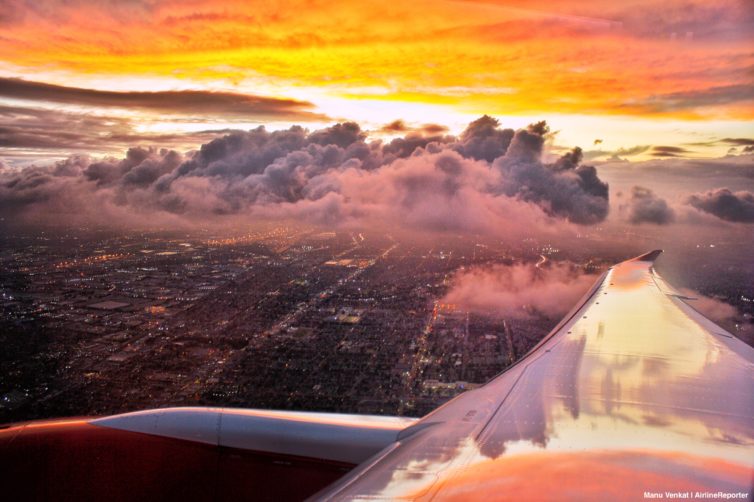 Grading premium economy ultimately comes down to one question: does the product feel more like business-minus or economy-plus? Based on my positive overall experience flying Virgin Premium, I’d say it qualifies as closer to business class side of the spectrum for a few reasons:

While many airlines’ premium economy cabins feel like afterthought add-ons (because they probably were), Virgin Premium comes across as a thoughtfully designed product, especially with signature features like the Wonderwall. It doesn’t hurt to fly it on the Dreamliner, which in general is a joy to experience.

If I had to point to any areas for improvement, it would be the following:

Virgin Premium flies on the airline’s other long-haul aircraft, though the seats look slightly different. Here’s some photos our our flight in Virgin Premium on the 747-400, which flew us from Orlando to London Gatwick. The seats weren’t quite as new as on the Dreamliner, though they were still in very good shape. Much of the Premium cabin is on the main deck — which is where we flew — though a few Premium seats are on the upper deck. 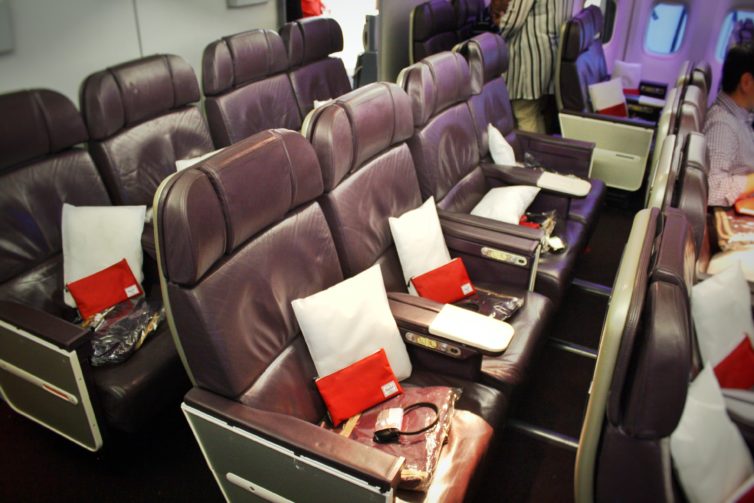 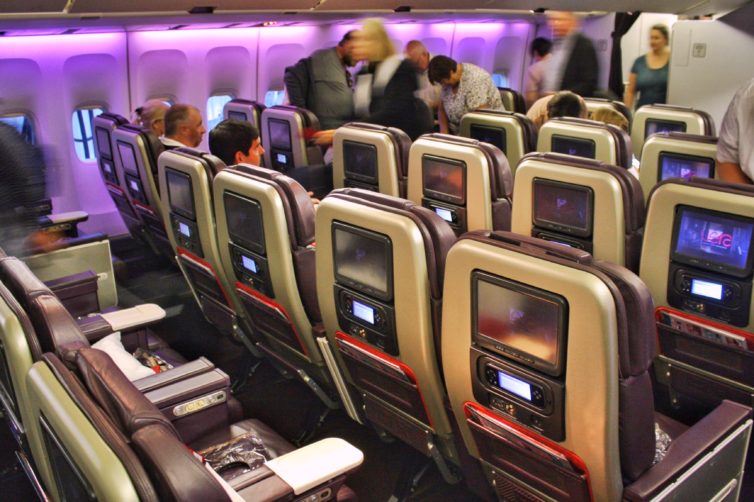 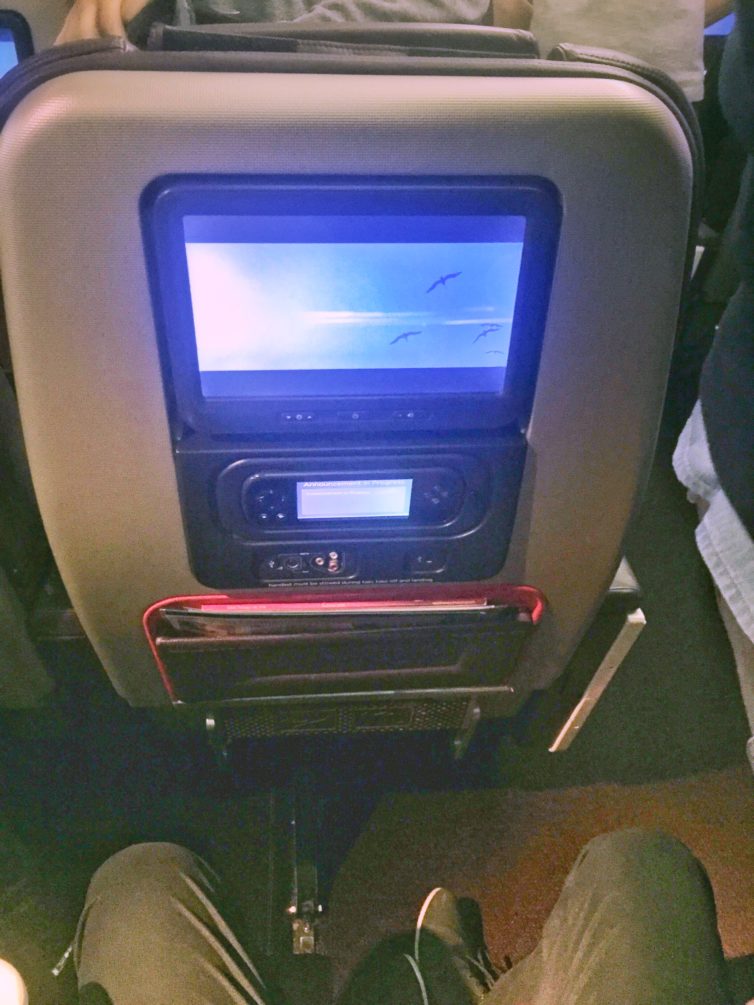 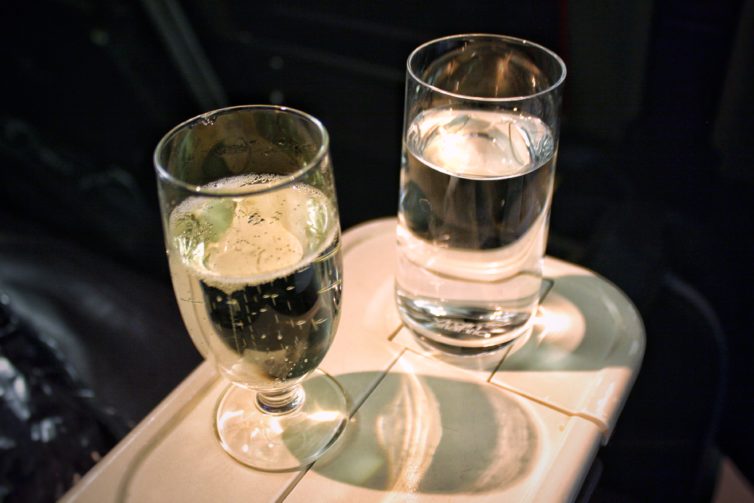 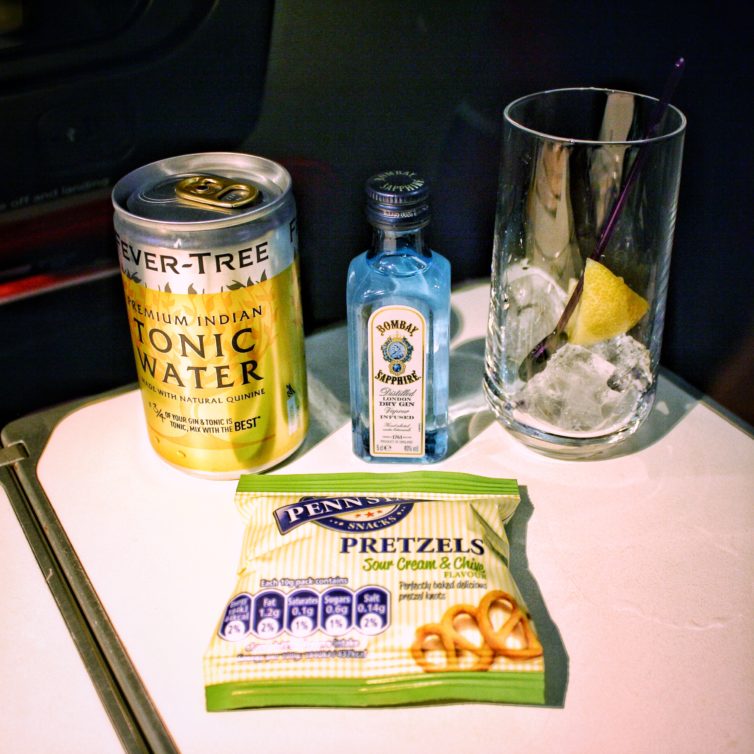 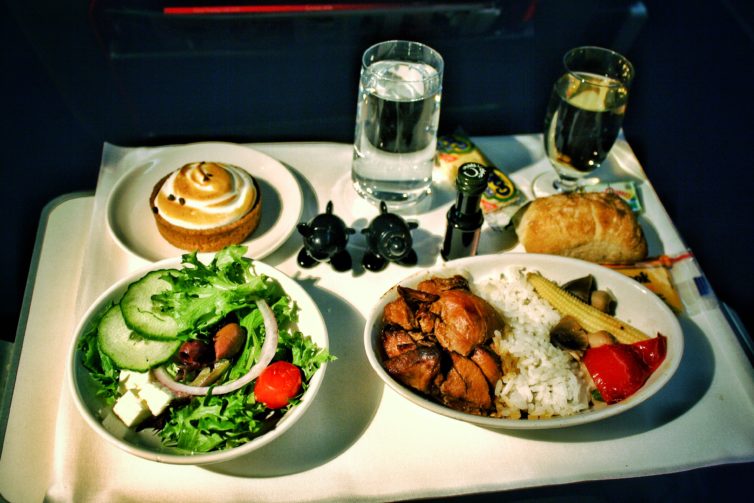 Now it’s time for us to hear from you! Share your thoughts in the comments section below.

Note: Virgin Atlantic provided our tickets for these flights. All opinions in this article are our own.

Interesting. I flew Virgin Atlantic premium-economy from LAX on the 787 in 2016 and then from LHR to DTW on the A330. At the time, there was no surcharge for champagne. It was complimentary. Interesting to see they now charge for it. Tacky if you ask me. But what was really weird was they didn’t at the time provide pillows or an amenity kit for daytime flights from London to the US. I guess that’s changed.

I think you’ve got things a little muddled up here. The “surprise” calzone is served in the middle of the flight as a mid way snack – not just before landing. Afternoon tea is the last service before landing.

I think you’re a bit muddled up here as well Nick. Champagne definitely was not complimentary in Premium Economy in 2016.

Considering there is no glamour in flying, Virgin do their best to give a taste of the”good old days” before we became cattle in a fast moving tin can. Their staff also appear to want you on their flight unlike many other airlines. Virgin for me, every time.

Right you are Bob, my memory got a bit muddled on that one. Corrected accordingly

I loved the premium economy flying the 787-9 JFK to LHR … it was simply amazing including the no charge premium beverages. Not quite as nice on the way back LHR to BOS on the A340-6 but still better than economy. I did BA’s 777 economy class LHR-BOS and it was truly horrible. Cramped seating, the full recline of the person in front of me put the seat about 8″ from my face (I was then forced to recline). I’ll stay with Virgin’s Premium product any day! Great article!

I always make sure it is Virgin and not Delta/Virgin. There is a hell of a difference.

For sure! The 787-900 ALONE is a huge bonus in arriving refreshed. The pampering is a bonus! hehe

Your summary referred to ‘missed call buttons’ which at face value seem inconvenient, are in reality quite a serious issue. The call buttons are there to call for help, not just a top up and as such, neglecting to respond to your call is somewhat negligent and putting peoples safety at risk.

Speaking from experience, it is easy to tire of the incessant ‘bing’; but there was an occasion where I peaked through the curtain and the bing was for the benefit of the gentleman laying face down in the aisle with a weak pulse.

Whilst 50 call bells get on your last nerve, the 51st might be a heart attack, someone trying to open a door or set his own tighty whities on fire! You just never know.

Virgin has had its day! Delta has screwed it up so badly. I am a Virgin Gold Member, leaving the brand and Delta behind! Flying Gold members get no love from Delta, so feck’em!