Originally announced back on January 20 during a special event at the Hollywood Bowl, June marked the largest piece of American’s aggressive expansion out of LAX:

As a side note, you may have noticed that a few of the routes overlap with Alaska Airlines’ mainstay flights (SEA, PDX, ANC). When asked about the potential competition against a close partner and the optics possibly being detrimental, it was pointed out that Alaska actually placed its codes on these new flights as part of a quiet expansion of American’s and Alaska’s codeshare agreement, giving passengers of both airlines access to more flights.

Along with these new destinations from LAX, American also launched new routes from:

With such a great opportunity to witness so much potential commotion, I set my alarm to wake up at an unholy hour and headed towards LAX to hit the ground running… because #AvGeek. 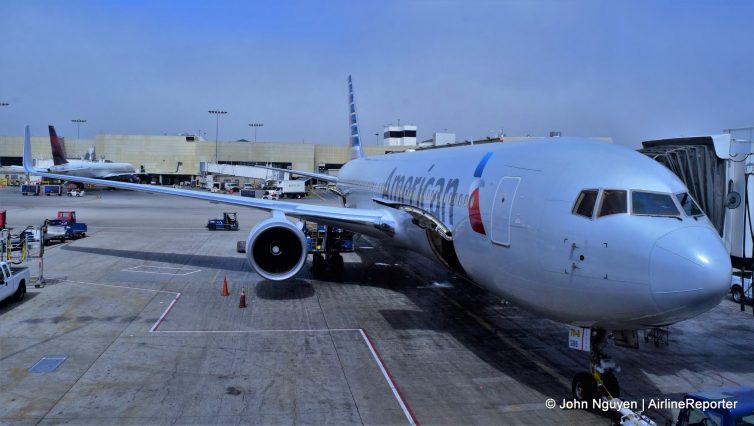 5:45 am: Leave for LAX, giving myself a little extra time in case of traffic. 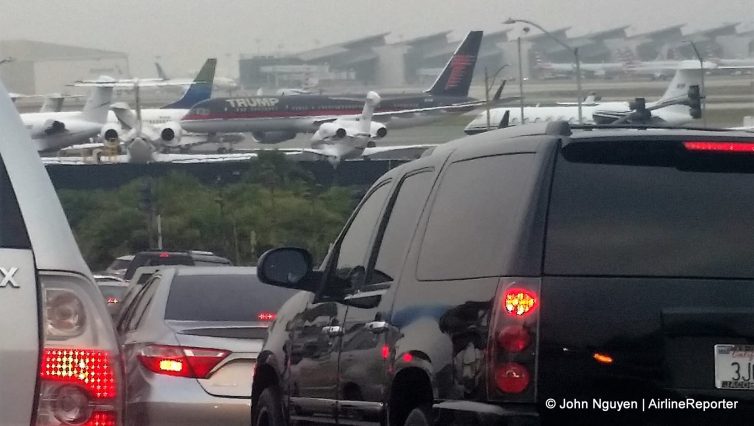 I spy Trump’s 757 while stuck in traffic getting into LAX. Or, just another day in LA.

7:05 am: Arrive at American’s exclusive Flagship Check-In area in T4. Get escorted with a couple of New York/JFK-bound first-class passengers to the front of the security line. Thanks Tony! 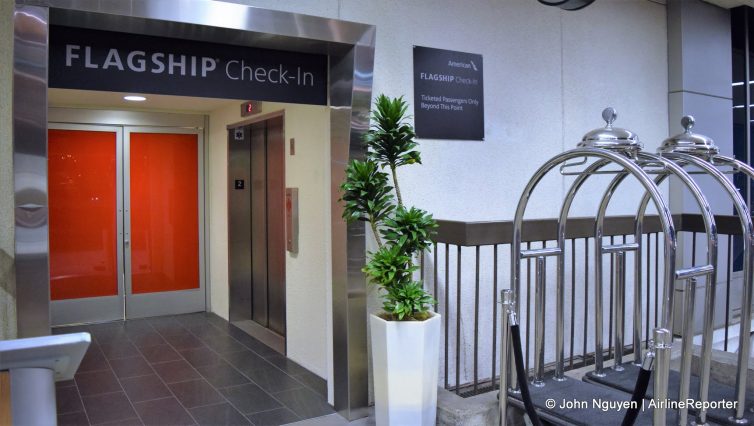 7:10 am: Get through the T4 security checkpoint, check the flight departure boards; the flight to SEA is departing from Gate 60D in the remote terminal. D’oh!

7:15 am: Having missed the departing shuttle bus and watching it pull away, wait for the next shuttle to the remote terminal for regional flights by American Eagle, colloquially known as the “Eagle’s Nest.”

7:20 am: Next shuttle departs for the Eagle’s Nest. A couple of stoppages for crossing aircraft traffic; great at normal times, not so great when running late. 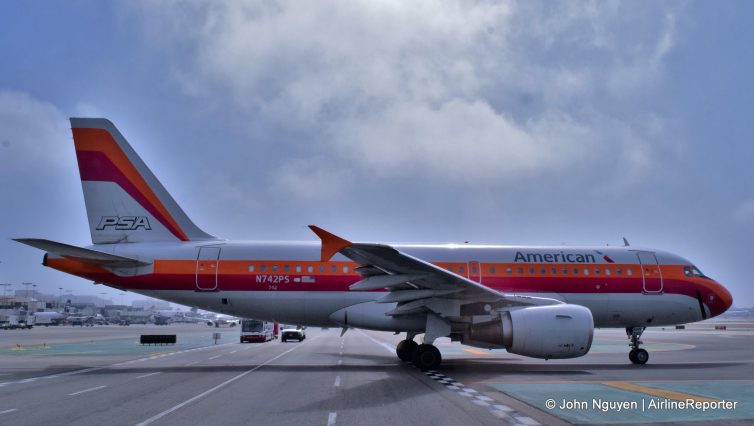 An American Airbus A319 (N742PS) in heritage PSA livery. Blocking our path to the Eagle’s Nest.

7:25 am: Arrive at Eagle’s Nest, just in the nick of time for Ribbon Cutting #1. Only seven more to go. Waiting passengers are quietly pleased to be on the first of five daily flights by AA from LAX to SEA, this one operated by a Compass Airlines Embraer E175. MD has a few words welcoming the passengers. The flight crew and some ground staff from Eagle participate in the ceremony. Boarding starts immediately, and Flight 5944 departs on time at 7:55 am. 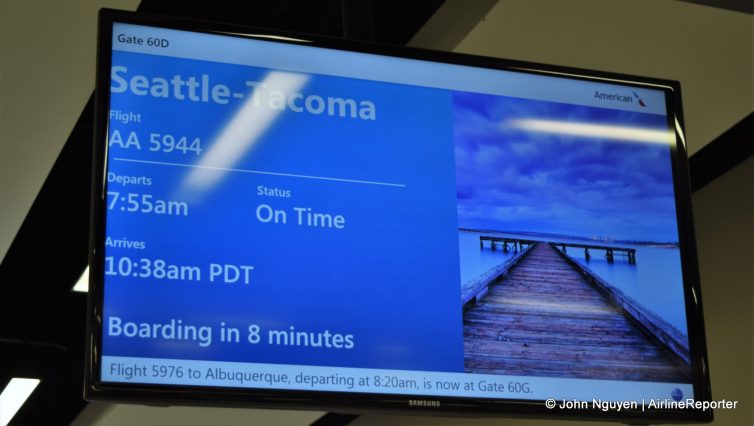 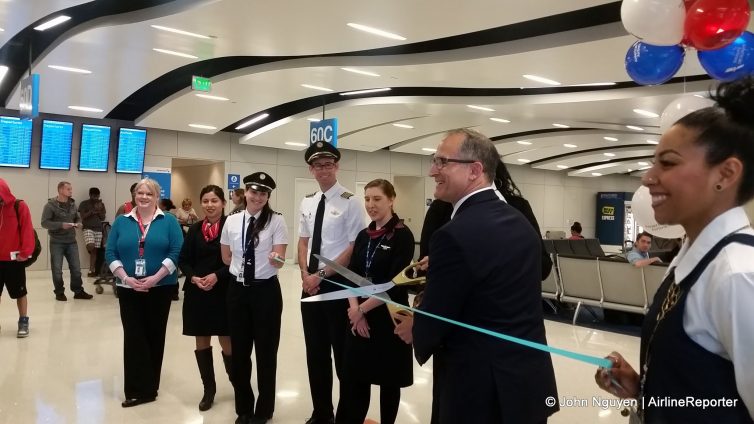 Jim Moses, Managing Director for American’s LAX station, with flight crew and ground staff at the inaugural flight to SEA on June 2 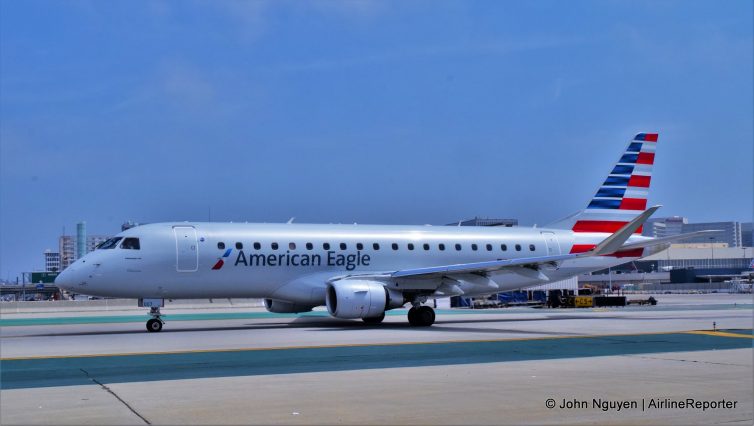 7:35 am: Entourage breaks down the equipment at Gate 60D and head for the next inaugural, Flight 552 to Kansas City (MCI) departing from Gate 61 in the main Terminal 6 (T6) building. But no bus for us… we get a company van! The perks of tagging along with the station MD. I even get to ride shotgun… then the MD half-jokes about how bad the driver is. I’d like to thank Veronica for getting us around in one piece with minimal damage to surrounding aircraft and only one close-call with a cone. 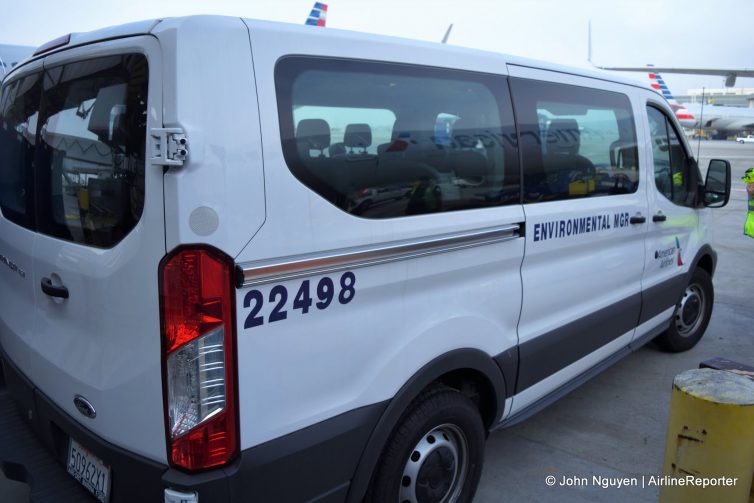 Our entourage’s ultra-VIP ride around LAX

7:40 am: Arrive at Gate 61 and quickly set up for the ceremony. This time, a giant novelty check in the amount of $2,675 raised by AA employees is presented to the Los Angeles Mission. Mood continues to be festive, and passengers are off to Kansas City on time. Ribbon #2 is cut. 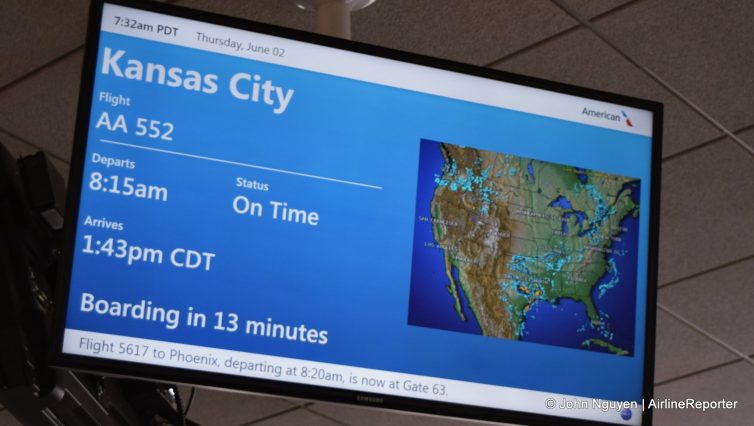 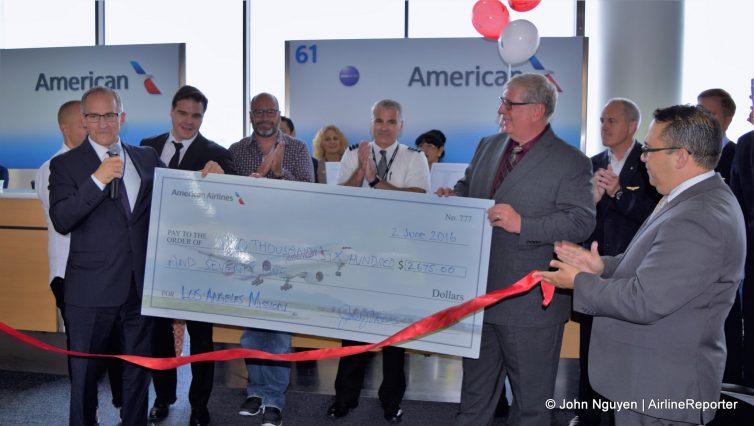 As part of their continued charitable fundraising efforts, American Airlines employees presented the Los Angeles Mission with a check for $2,675 on June 2. The LA Mission is one of the nation’s largest homeless service providers. 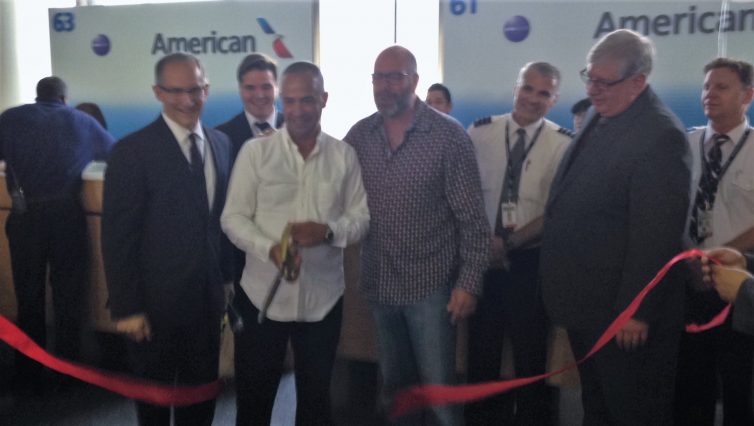 7:55 am: Another van ride, this time to T4 for a 9:50 am departure to Minneapolis-St. Paul (MSP) out of Gate 42B. Finding parking was more difficult than in Downtown LA. With a little bit of breathing room, entourage takes a small break before the next ceremony. I use one of the new workstations installed by AA in T4 to charge up my laptop and phone. 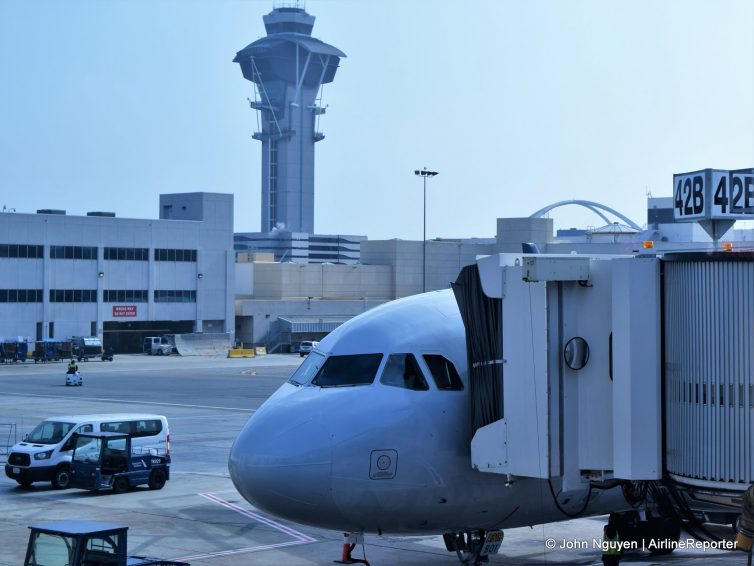 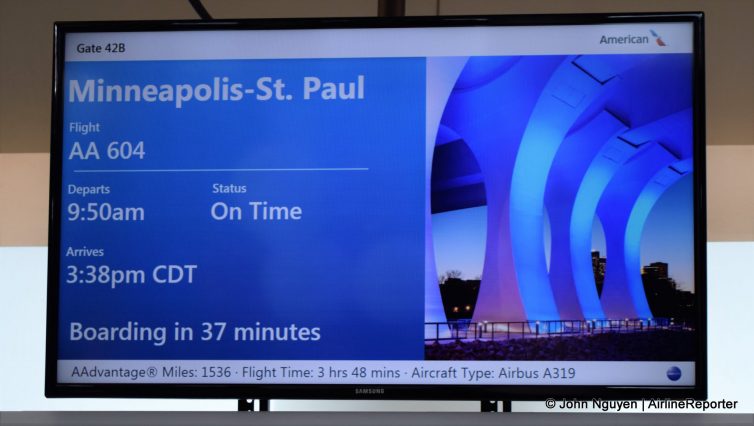 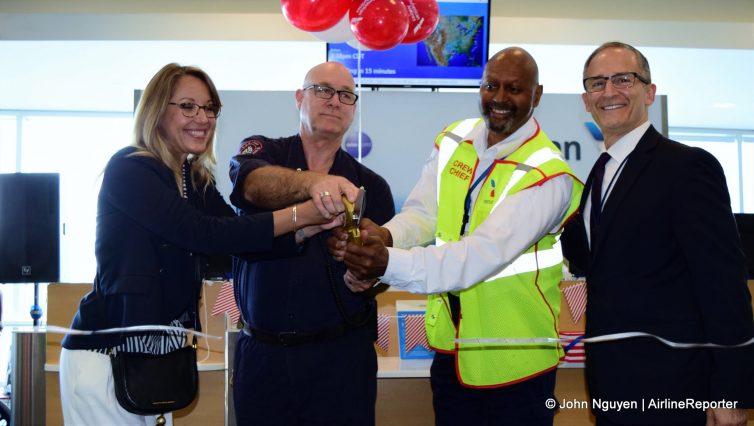 Some long-time American Airlines employees cut the ribbon for the inaugural flight to Minneapolis-St. Paul on June 2

9:40 am: Another short break before the next inaugural to New Orleans (MSY) at 11:15am, scheduled to be right across the concourse at Gate 45. Entourage recesses; I head out to repark my plug-in hybrid car into a charging station. None available at P6 parking, so have to go out to P1 and make the 10-15 minute walk back to T4. Cut across the parking garages to T7, then walk past T6 and T5 back to Flagship Check-In.

10:00 am: Make it back to T4, where Tony again provides an escort to the front of the security line, all the way to the x-ray belt, and even has a bin ready for me. Flagship service ain’t no joke.

10:10 am: Head down to Terminal Transfers again. Large crowd waiting for the T6 bus. They must have been waiting a while, because 3/4 of them gave up and left to walk through the tunnels to T6. Two minutes later, the T6 shuttle bus shows up. 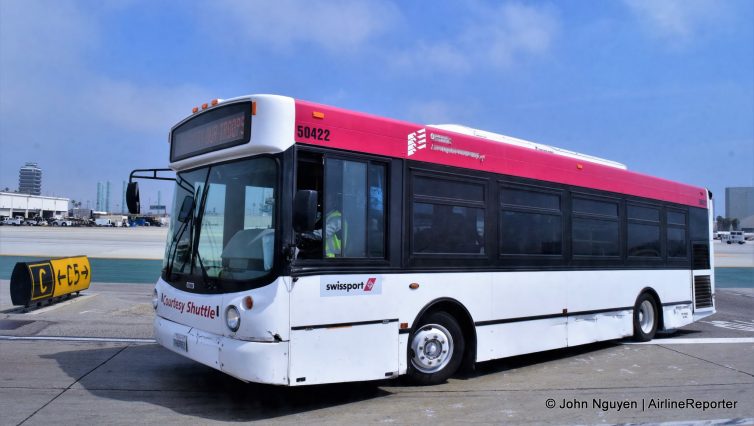 The shuttle bus between Terminals 4 and 6 at LAX, operated by American

10:25 am: A special guest joins the entourage, the mascot for the Los Angeles Clippers, Chuck the California Condor. Chuck makes his rounds entertaining passengers, and given the destination, they seemed enthusiastic about Ribbon Cutting #4 and nonplussed about the gate change, accepting the MD’s apology, though some request free drinks. One of AA’s other managers quips that there will be complimentary beverages for all, so long as they are soft drinks. Chuckles all around. 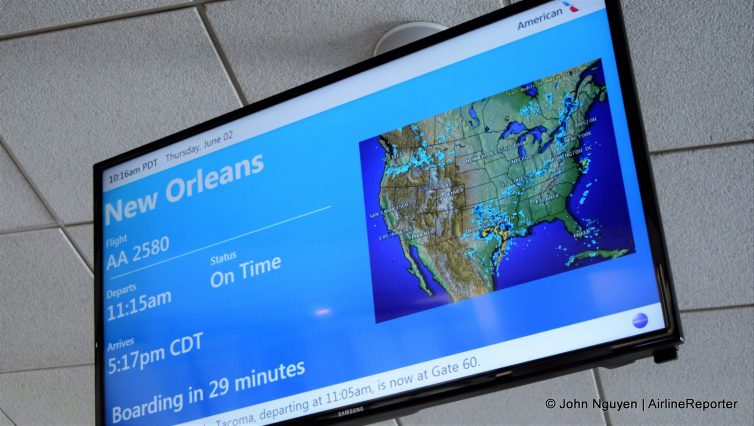 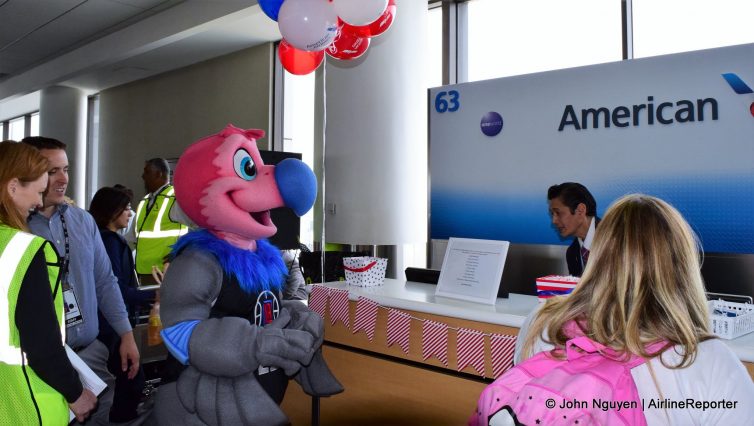 Chuck tries to get on the flight to New Orleans, but first class is full 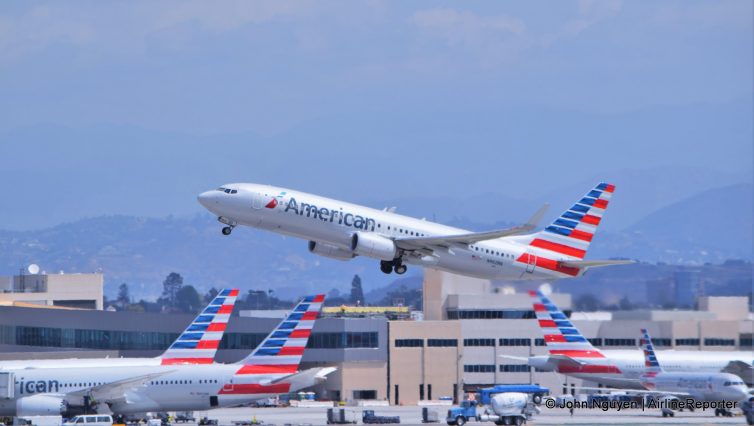 An American Boeing 737-800 departing from LAX

10:45 am: Passengers start boarding for an on-time departure of Flight 2580, operated by a Boeing 737-800. Entourage heads for another van ride back to the Eagle’s Nest, with Chuck in tow. Chuck continues his antics down the T6 concourse, and several passengers take advantage of the photo op.

10:50 am: Chuck almost opens a secured door to the ramp, which would have caused a terminal evacuation. Chuck is sorry.

10:55 am: Back at the Eagle’s Nest for a 11:35 am departure to Portland (author’s note: The Clippers fell to the Portland Trail Blazers in the first round of the NBA playoffs, four games to two, losing the last four games straight. Ouch.). Find out that Flight 5926 pushed back to 12:19 pm (slight ouch… and strangely precise).

11:00 am: Chuck gets antsy and is back to his antics. Absconds with a bag of potato chips from the sandwich counter. Takes a passenger’s water bottle from her carryon. Walks away with another passenger’s entire rollaboard. Does somersaults down the concourse. You know, normal stuff one does while waiting for a delayed flight. Complimentary soft drinks, water, and healthy snacks are available by Gate 60I to waiting passengers.

11:20 am: Ribbon Cutting #5 gets underway. MD apologizes for the slight delay due to inbound aircraft (another E175), passengers are in a forgiving mood. 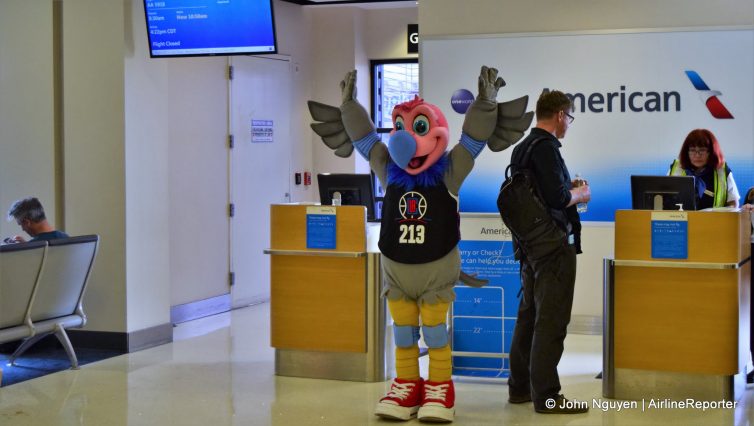 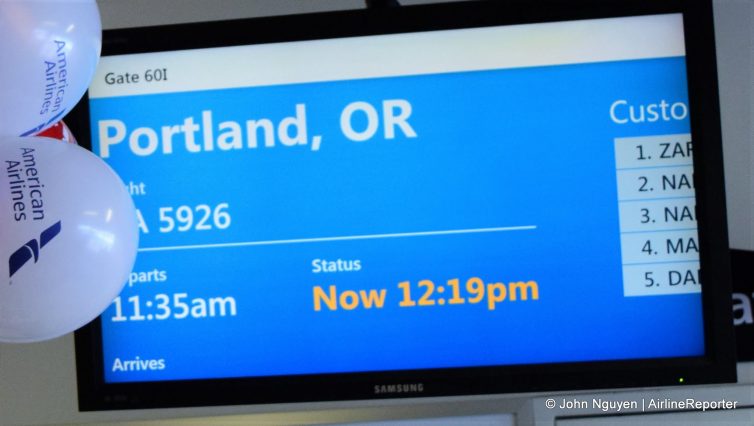 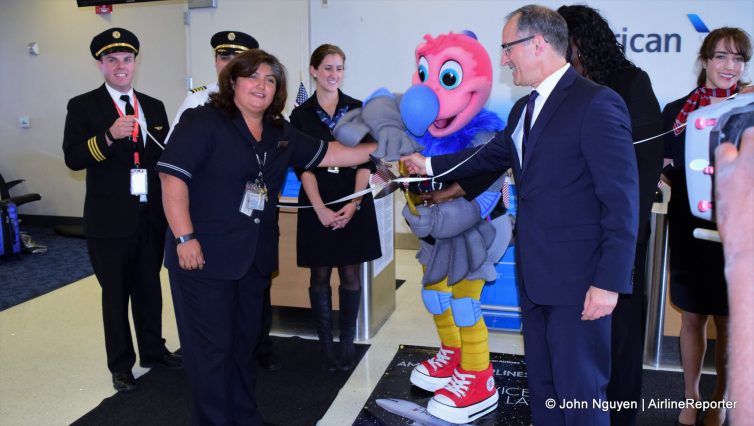 Chuck helps an American Airlines employee with the ribbon cutting

11:35 am: Entourage piles back into the van for a ride back to T4 and American’s administrative offices. One last post with Chuck and Jim. 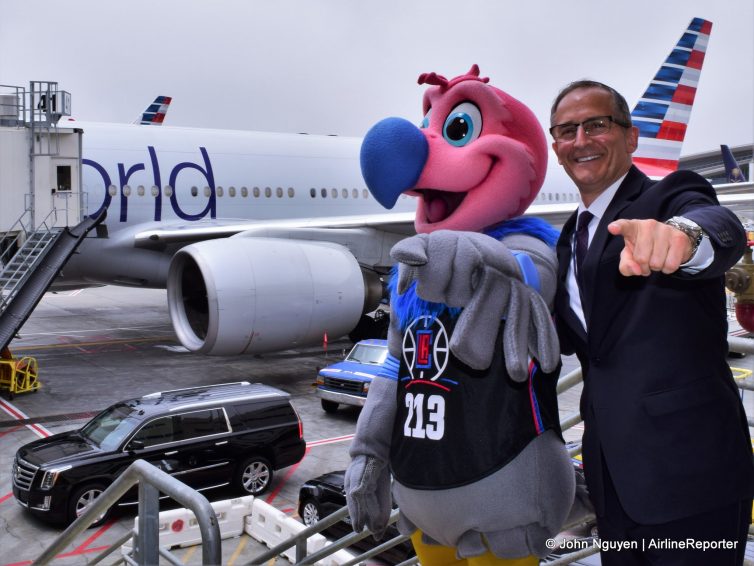 Chuck the Condor, the LA Clippers’ mascot, and Jim Moses, AA’s Managing Director at LAX, pose in front of N791AN, a 777-300ER in Oneworld livery

11:40 am: With a seven-hour gap until the next bank of inaugurals (6:25 pm to Omaha, 7:35 pm to Anchorage, and 9:15pm to Hartford), the entourage disbands to take care of business. I get to check out the view from the MD’s office for a bit. 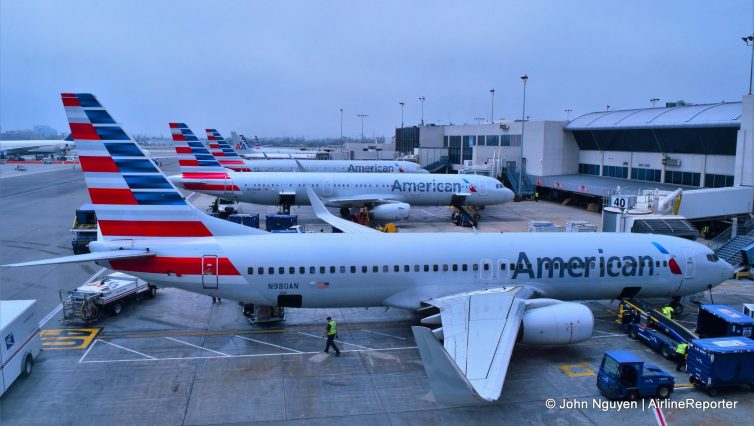 It must be nice to be in charge.

Shortly afterward, I pull a total “L.A. move”… as much as I would have liked to stay for the remaining inaugurals, I made the executive decision to head out before the evening rush hour hits. It was an exciting, if exhausting, series of mini-celebrations that punctuated American’s serious post-merger commitment to expanding service to/from LAX and beyond. 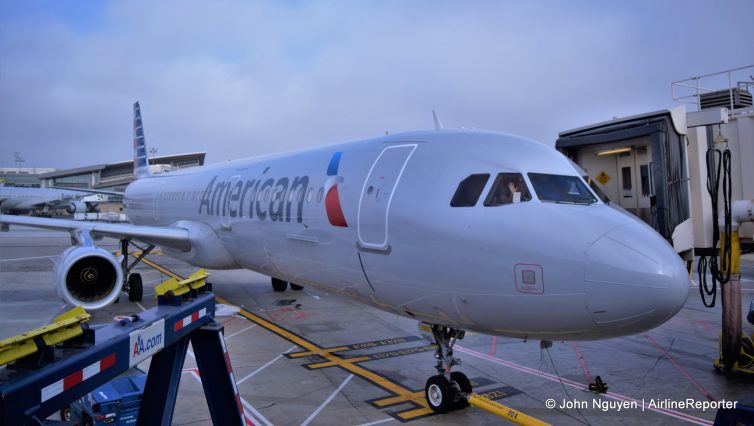 Someone should tell AA that its Hartford/Springfield!

Thanks John. I wasn’t aware of the new routes ex LAX. Very interesting for us in Australia when travelling on a Oneworld RTW ticket. Can now get to SEA without having to transit through DFW.

That’s a very good point to bring up! Connectivity as a South Pacific or South America gateway is important, but those pesky round-the-world rules just got less annoying!

I do not question AA’s list added or expanded domestic cities. I’m certain that they have the traffic and load stats to support their actions. I do have to wonder a bit (OK, a lot) the 5x frequency to SEA and 3x frequency to PDX. I have to wonder what equipment AA is using on these two routes. As currently configured, both routes will put the aircraft (And Crews!) at an away station for an overnight, yet another expense. AA may have stats to prove a need for 5x frequency (SEA) but that almost assumes the idea that can have ALL of the route’s traffic. The same ideas apply to the PDX route, a rather silly idea at best. Even if AA equips those routes with new RJ hardware, a lot of seat-fillers do not like their soft product and with good reasons: their domestic service simply sucks. Using RJ metal will annoy even more folks (with good reason) and a lot will depend on how much of the traffic (x) they can actually get – and then keep. It will not include me.

Do you include the E-175 in your dislike of RJs? I find them fantastic, and prefer them to a lot of the bigger jets.

LAX-PDX is 3x E75s, with one Compass crew staying in PDX overnight.

Wow! Check out that nostalgic PSA livery, complete with the smiling face : )
More aircrafts should have this livery. PSA was one of the genuinely nice airlines of the yesteryears with a fun-loving attitude.
Miss you PSA!