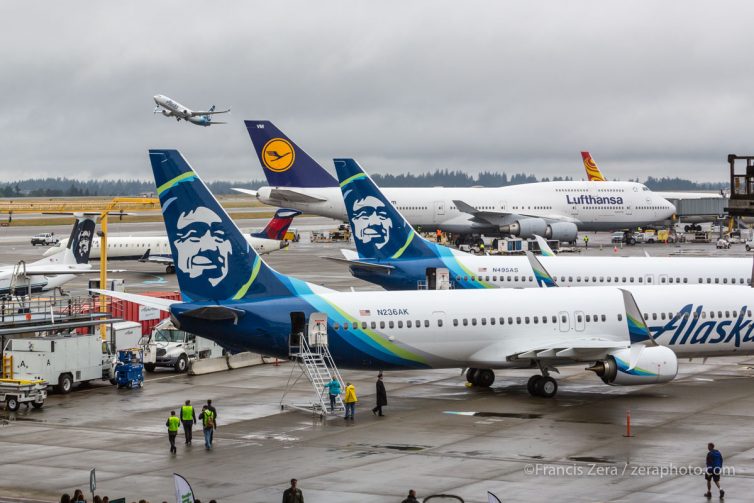 Two brand-new 737-900ERs were completely open for tours, including the cockpits. The jet in the foreground was two weeks old and still had that wonderful new-airplane smell. 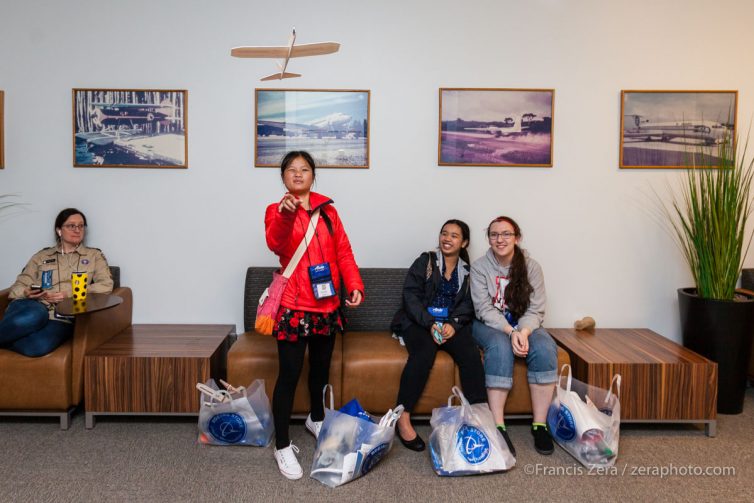 The May 21 event at Alaska’s Sea-Tac Airport maintenance hangar was extraordinarily well run, and everyone I met â€” really, I mean everyone â€”Â seemed to be genuinely enjoying themselves, whether they were sharing information or soaking it up.

The event was co-sponsored byÂ the Boeing Company, the Port of Seattle, the Chief Seattle Council of the Boy Scouts of America and Girl Scouts of Western Washington. RoughlyÂ 400 Boy Scouts earned their aviation and engineering merit badges duringÂ the event. 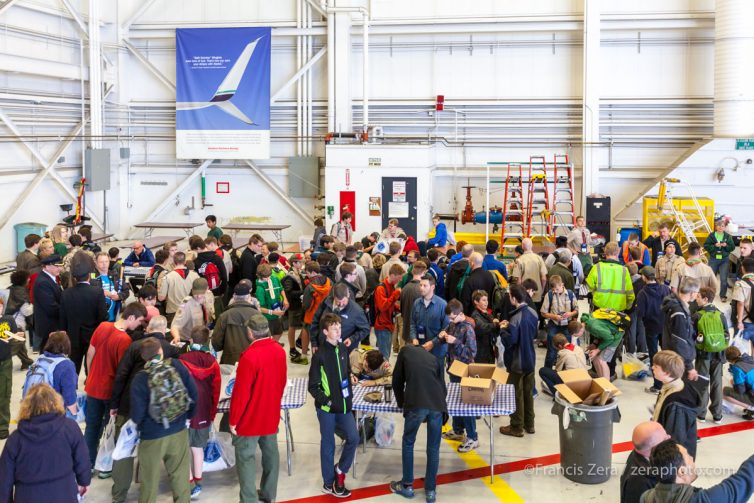 The event drew around 1,000 students and educators from across the Puget Sound region to Alaska’s maintenance hangar at Sea-Tac Airport.

I honestly had to keep repeating to myself Cassino’s statement about the event being all about the kids, as this particular adult had a tough time trying to remain an observer and not queuing up for a turn in the sims (although I did get to scope outÂ the view from left seat ofÂ a 737 cockpit).

That there would be excitement from the kids and the adult attendees is pretty much a given with an event like this. What was even more remarkable was the excitement and enthusiasm shown by the many Alaska Airlines and industry volunteers who put on the event. 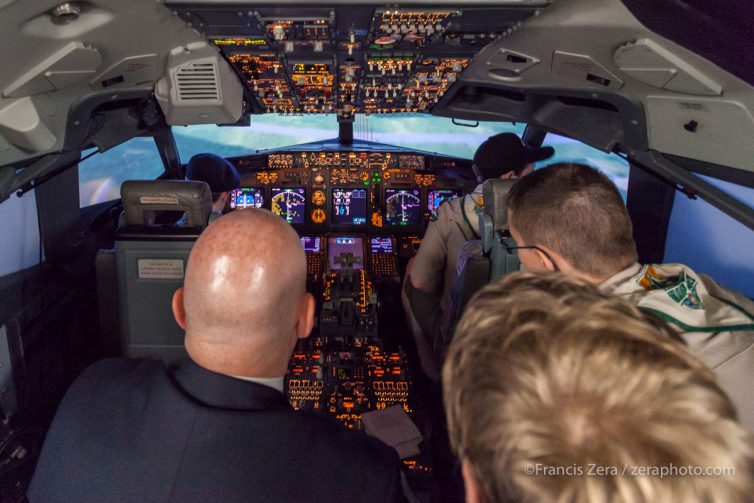 I’d never heard the automated “pull up” warning so often, or seen it dealt with so cheerfully, as when hanging out in Alaska’s cockpit simulators.

I’ve been in the news business off and on since the early 1990s, and as a result have gotten a bit jaded, and half-expected to see a bunch of weary adults shepherding groups of quasi-bored kids from station to station.

It did my heart good to see the volunteers’ collective and genuine enthusiasm for showing these kids both a good time and giving them an accurate and enjoyable introduction to the various careers available in the aviation industry. 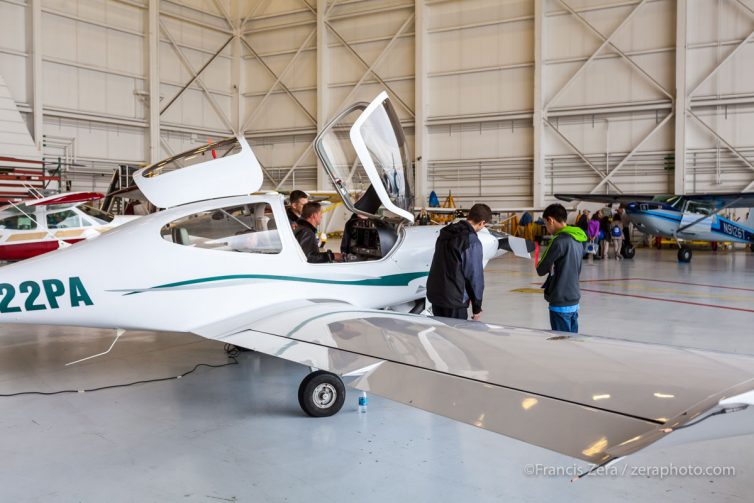 Several GA aircraft were on display as well, including this Diamond DA40XL from a local flight school.

There were balsa-wood airplanes constantly floating around the hangar, an endless stream of laughter and shouts of “Hey! Come check this out! No, over here – you’ve gotta see this!”

The pilots onÂ the flight decks and running the flight simulators all seemed delighted to explain the workings of aircraft systems to each and every visitor, flight attendants explained evacuation procedures, and mechanics quizzed curious students about the functionÂ of jet-engine compressors.

It was boisterous, loud, and an enormous amount of fun.Â Some additional photos to share the day’s story: 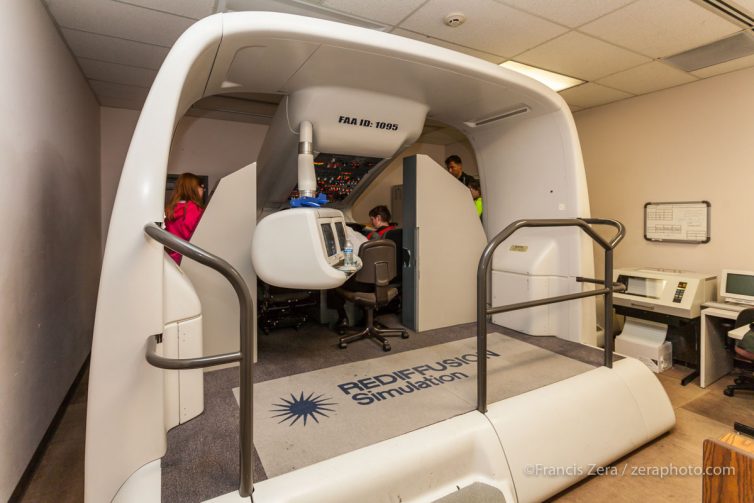 Alaska opened up their entire training facility to the students. This is one of their static cockpit simulators. 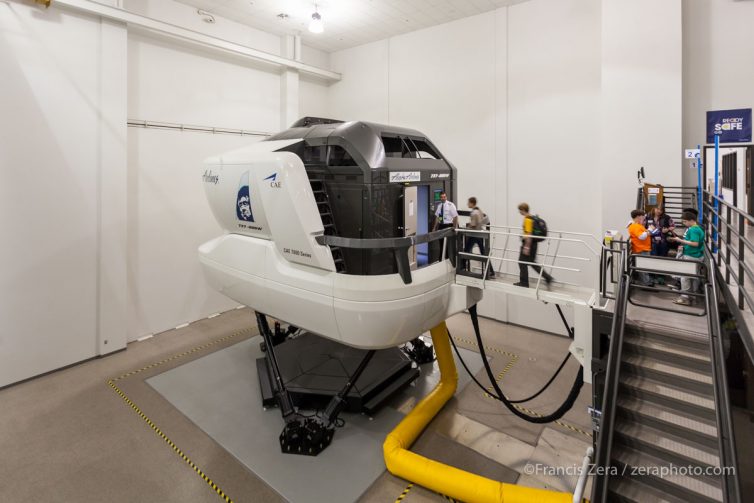 And this is one of their full-flight sims. These things cost around $13 million each. 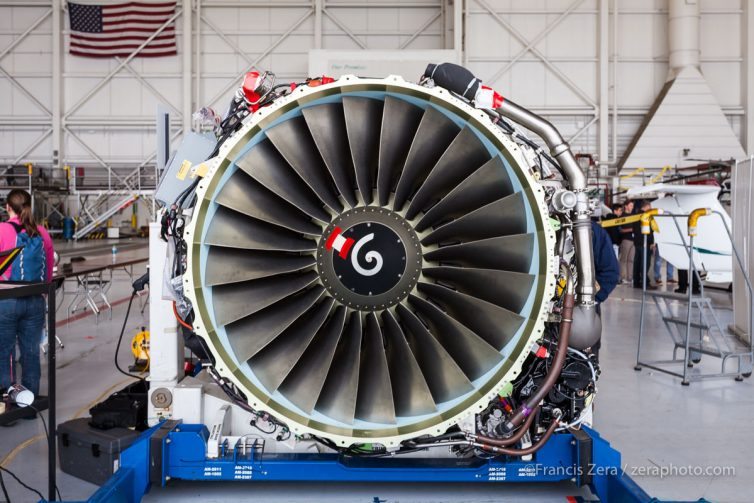 A spare engine was on a stand for the future A&P mechanics to admire. 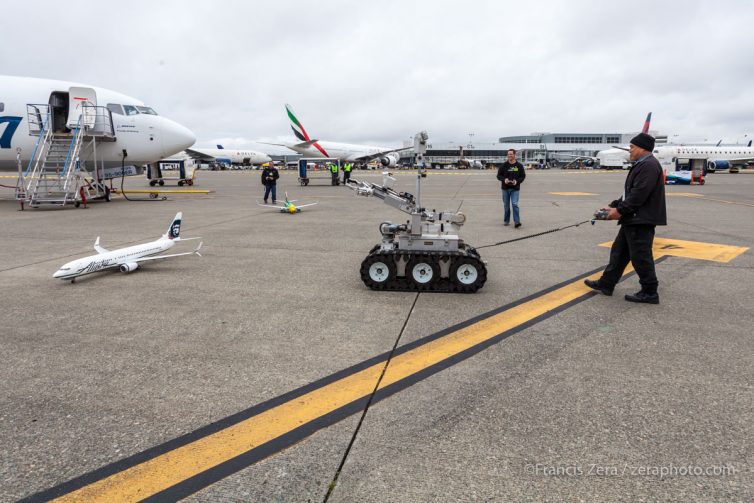 The Seattle Police Department had it’s bomb-squad robot out for a spin, and it played nicely with the two scale Alaska Air 737s. 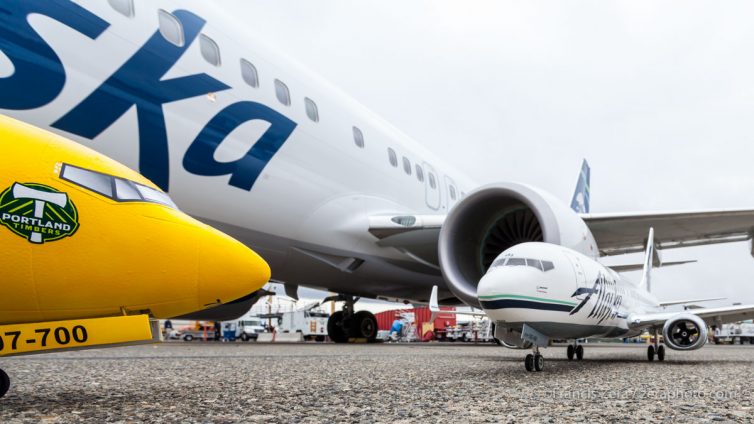 All of these aircraft really fly, some with a bit more carrying capacity than others. 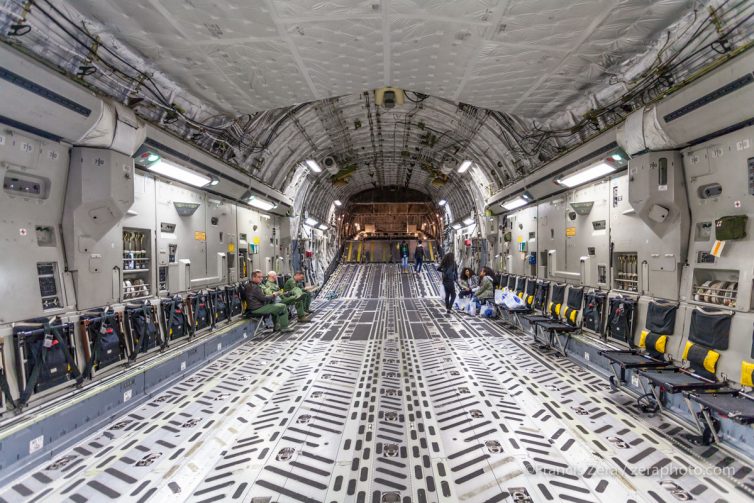 Getting inside a giant C-17 from Joint Base Lewis McChord made me wish I’d brought a skateboard. 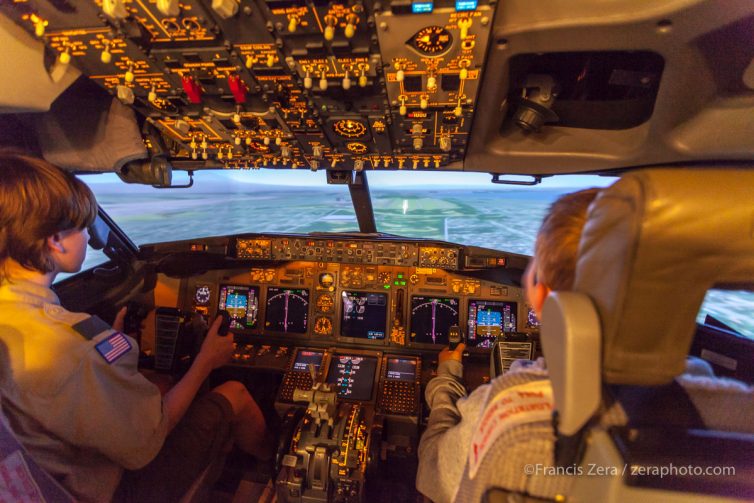 These intrepid Boy Scouts managed to land in the simulator, albeit on the lawn. 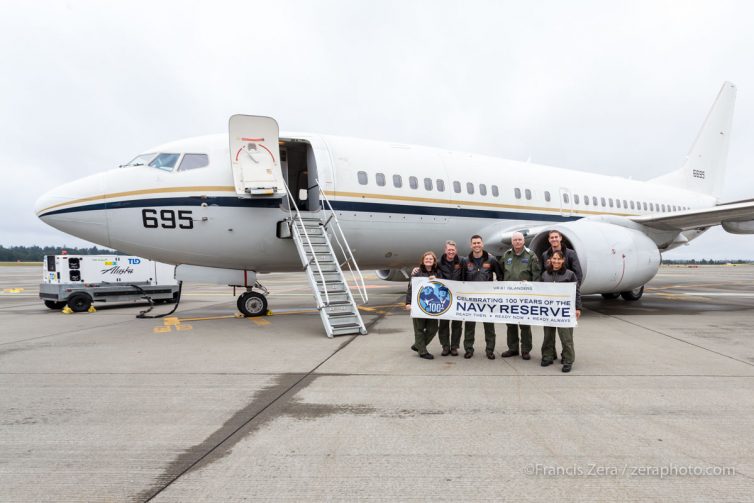 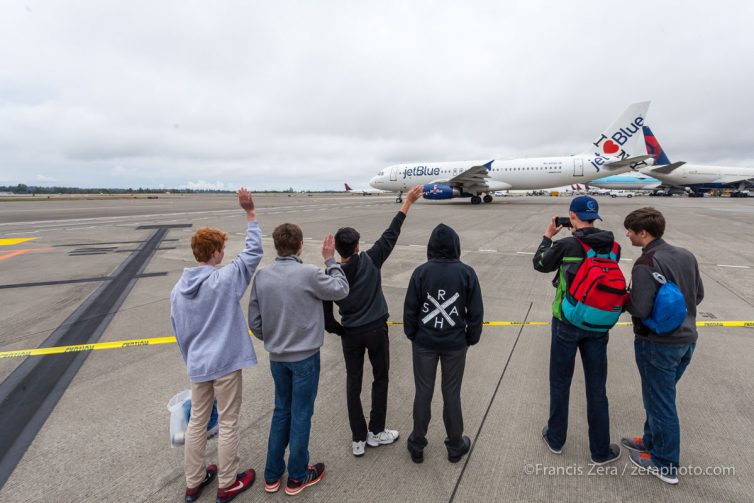 Alaska’s maintenance ramp is adjacent to Sea-Tac’s South Terminal and near the end of runway 16L/34R, offering plenty of planespotting opportunities, including exchanging waves with passing flight crews. 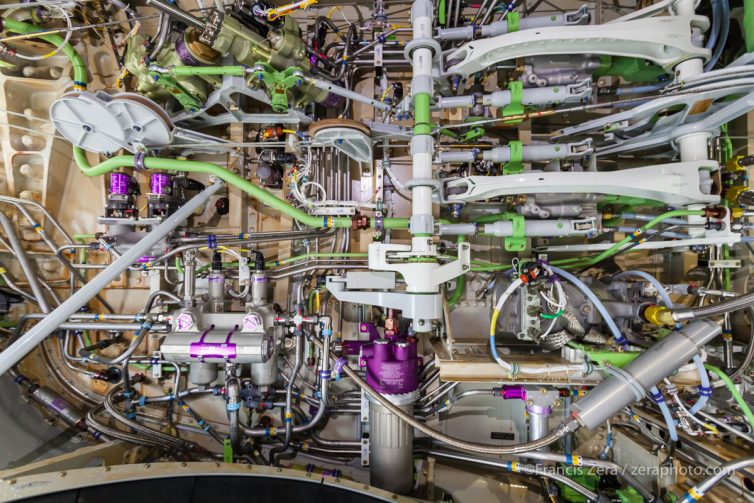 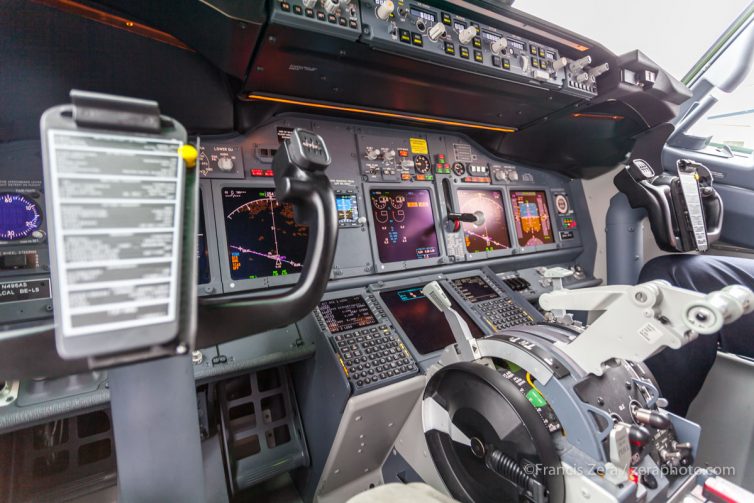 Even with hundreds of visitors, Alaska’s vast maintenance hangar has plenty of room. 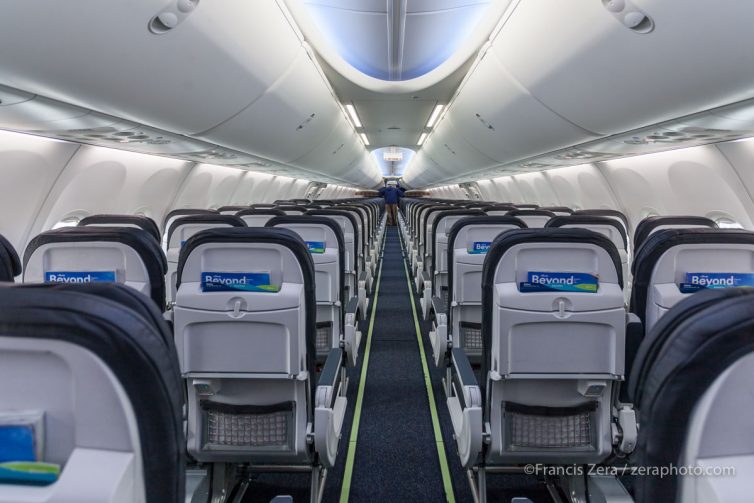 When’s the last time you saw an in-service commercial jetliner with such a pristine interior? 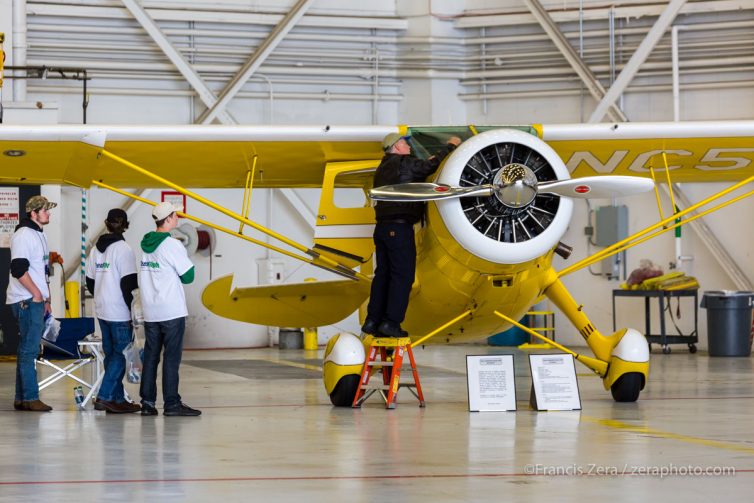 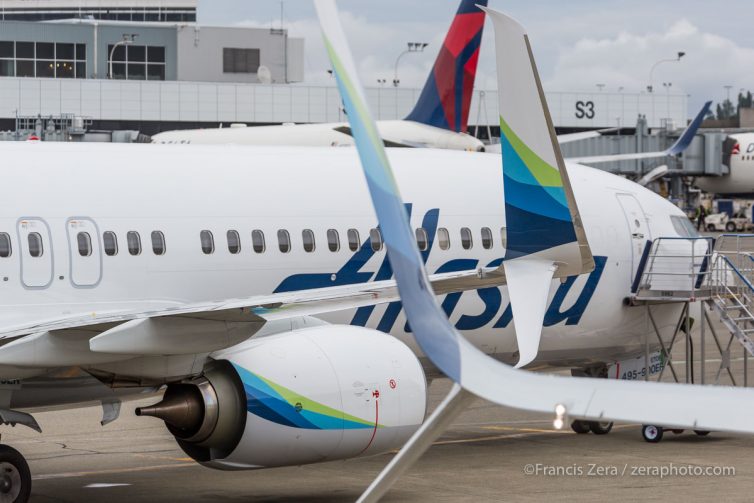 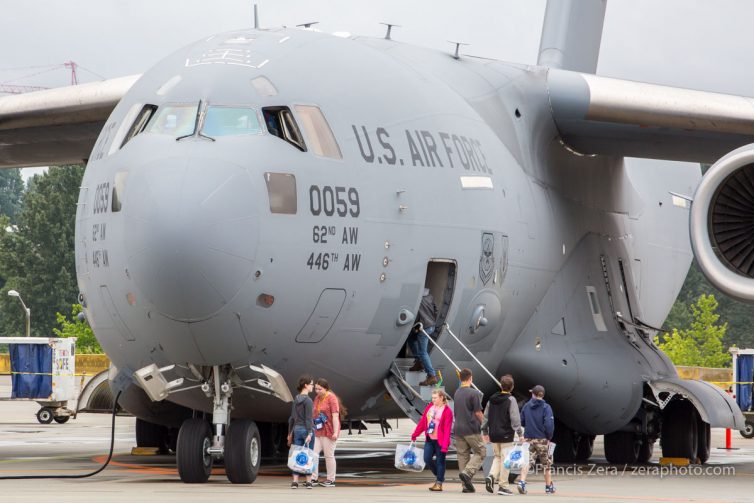 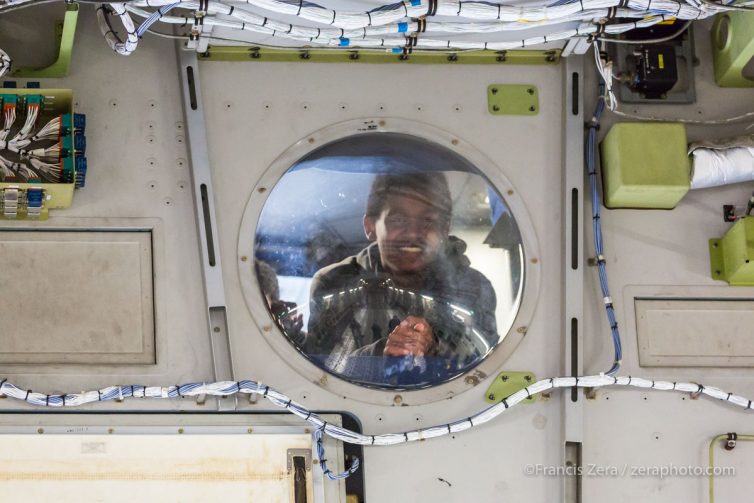 A happy face looks out from the C-17’s cockpit viewing window into the cargo hold. 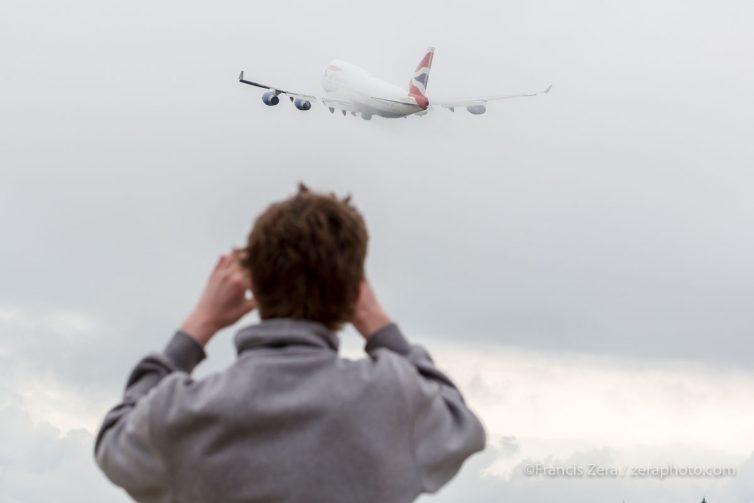 The Queen of the Skies never fails to impress. 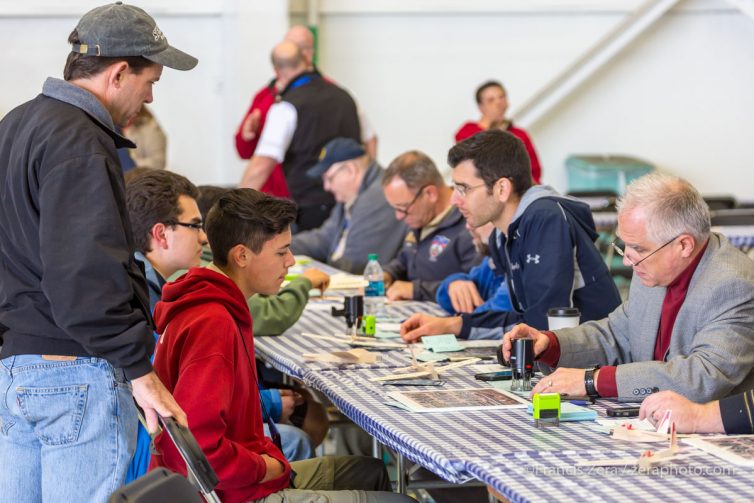 Students had a chance to talk to people from different aspects of the aviation industry and get sign-offs for merit badges.

http://www.zeraphoto.com
Flying a United Boeing 747 — Domestically on the Upper Deck
American Beefs Up Network with 21 New Routes, 10 from LAX
4 Comments

Let’s see, if I divided my age by [redacted], I would fit in perfectly!

Great article! So fun to see the excitement of adults and kids alike. Alaska has been my airline of choice for 25 years and will continue to be!

glad u had a great time kids and adults alike. wish I could have been there.