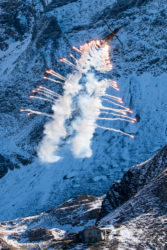 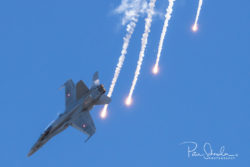 And it never got old 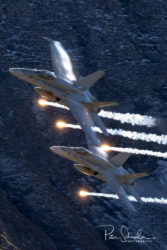 Or, if you’re able to secure media credentials, you get to ride to the top in a Super Puma helicopter, a treat which we thoroughly enjoyed on the official first day of the event. But we (“we” being AR contributor Peter Schneider and yours truly) really wanted the full experience, so we also hiked up to watch the practice the day before the official show. 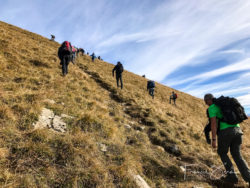 The hills are steep – you earn your seat at this show 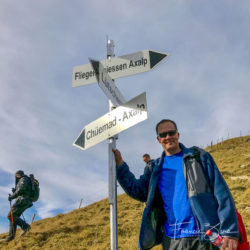 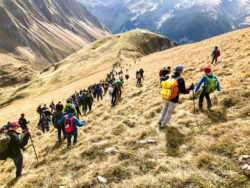 It’s still steep when the demo is over

This year’s demonstration was held Oct. 9-11, and it’s the first time in five years the event actually took place – the weather hadn’t really cooperated since 2012, and some accidents (not at Axalp) led to one year’s cancellation. Mountain weather, especially at 7,500 feet ASL, can be fickle in October. 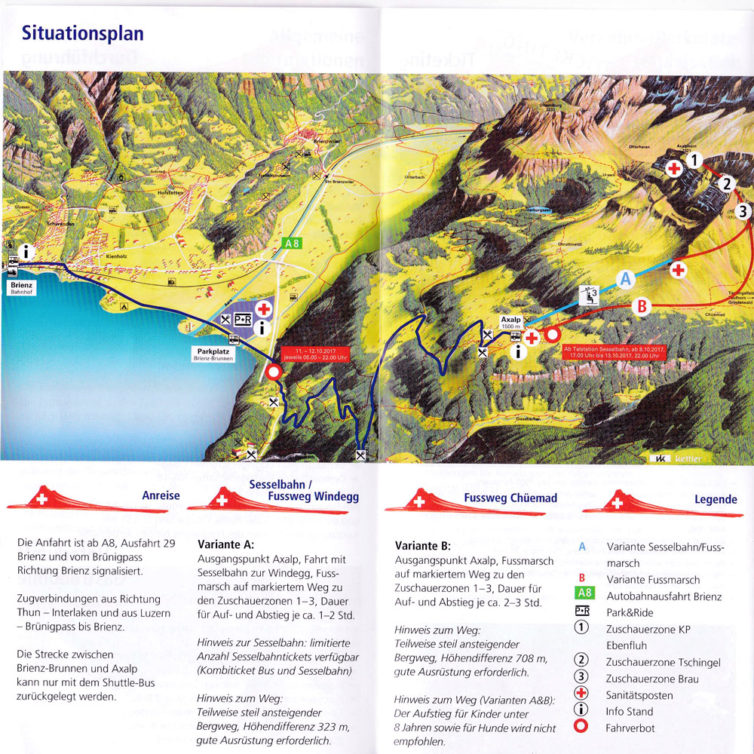 The event program looks just like a ski map, but with airplanes

The horizontal distance of the hike isn’t that long – it’s only a few miles – but it’s the 55%+ slog up frost-glazed, potholed grassy slopes, and the thin air at elevation, that’ll get you; or at least that’s what beat up this flatlander. But the scenery was so good it would have been worth the effort even without airplanes.

After a couple hours, we made it to the viewing area, which was already filled with people. Lots of tired folks were napping in the sun, but there were also plenty of jaunty groups drinking wine and eating raclette, which is kind of like a reverse fondue – you melt slabs of smelly, yet delicious, cheese and dump it over either boiled potatoes or bread. Not everyone’s backpacks were filled with camera gear – it was apparent that many had hauled up portable kitchens. 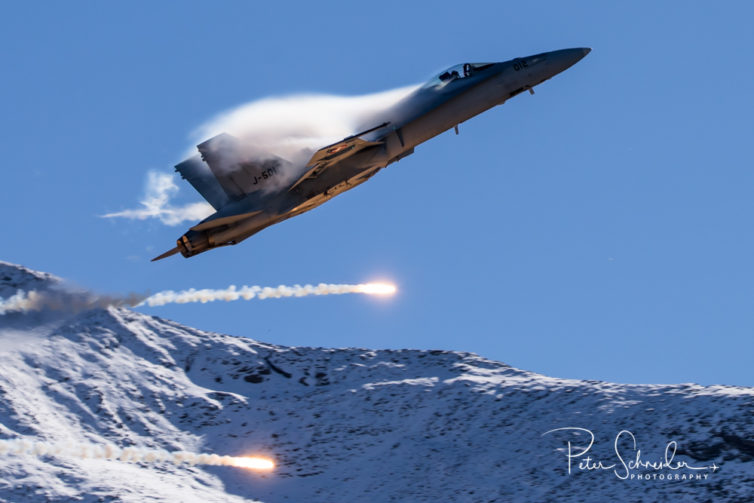 You could also buy bratwurst and beer from a couple of concession stands the air force had flown up there for the event. Those Super Pumas are very versatile machines. 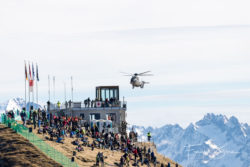 The VIP area at KP Ebenfluh 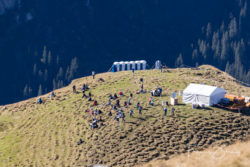 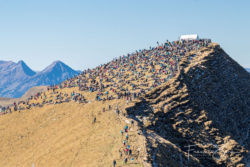 Now that I’m finished complaining about the hike, it’s time to talk about the airplanes. The Swiss Air Force still fields 26 Northrop F-5s of varying configurations and a couple dozen F/A-18c Hornets, many of which were flown for the demo. What looked like all 15 of their Arospatiale AS332 Super Pumas were pressed into service, either ferrying VIPs or long-lining supplies up and down the mountain. 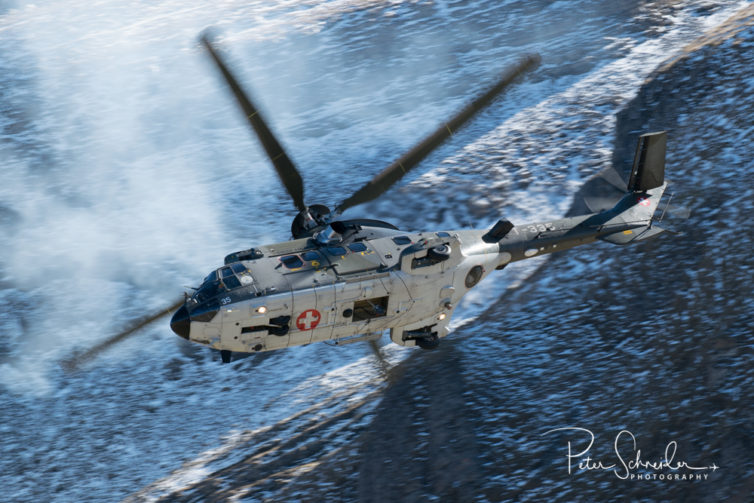 A Super Puma put on an impressive aerobatics display

At first, it’s a bit disconcerting to hear bursts of cannon fire overhead while you’re hiking, but, just like anything, you kinda get used to it after a while. The jets fire at bright-orange targets affixed to the canyon walls. 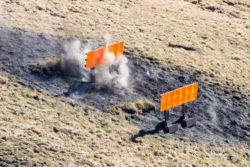 Even at a few hundred miles per hour, this pilot’s aim was good 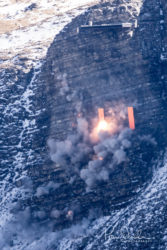 The jets did one pass at the target using incendiary shells 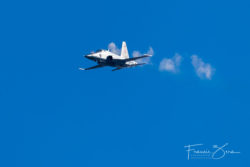 Watching the jets, you see the puffs of smoke from the cannon fire, you watch the jet get closer, then you hear the brrrrp sounds, and then you watch as the target gets lit up. Super cool stuff. 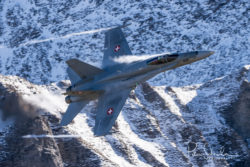 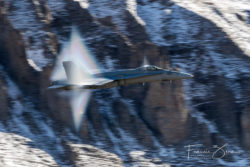 An F/A-18 flirting with the sound barrier 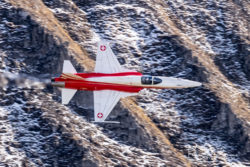 Check out the shock waves!

This trip really was an avgeek dream come true. 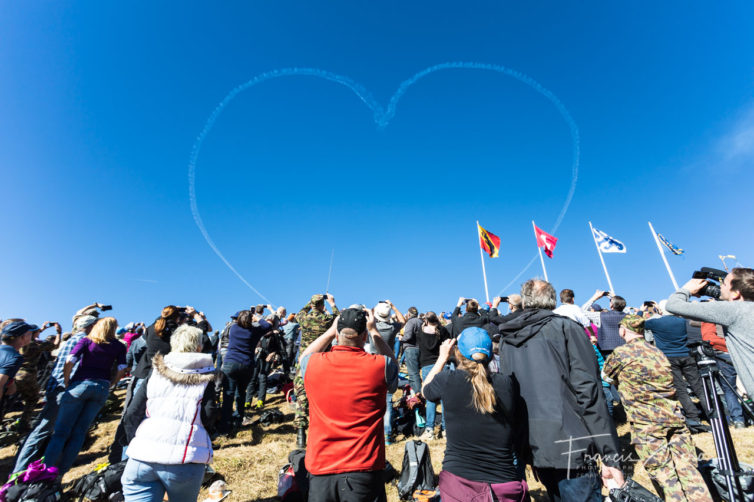 We heart airplanes, too!

Want to go? Peter Schneider has tips and a checklist for attending Axalp:

With Axalp 2017 now in the books, people are already talking about Axalp 2018. The Swiss Air Force has already published the official dates for next year: Oct. 11-12, 2018. Here are a few helpful pointers if you are considering a trip to Axalp:

If you have questions regarding the live fire training at Axalp or about attending the event, don’t hesitate to post your question in the comments section or send an email to peter(at)airlinereporterDOTcom.

I’d somehow never heard of this event before. Awesome write-up, definitely a Bucket List item for this AvGeek!

Wow Frenis really amazing post, and the images used to describe the journal, are looking really very attractive. Your Journal shows you are a good pilot as well as SAME trained Aircraft Maintenance Engineer. As you can take care of your plane any time any where.

Thanks for the great post.
I am planning to be there this year. I understand from other posts that there is a practice session in the morning. Do you know what time?

Ori,
Yes, the Swiss Airforce train every morning, weather permitting, on the Axalp days. If I remember correctly they take off sometime between 8.30 and 9am

Oops… completely missed your reply Peter. Thanks!
Any chance if you know if they also practice in the morning on the practice day?