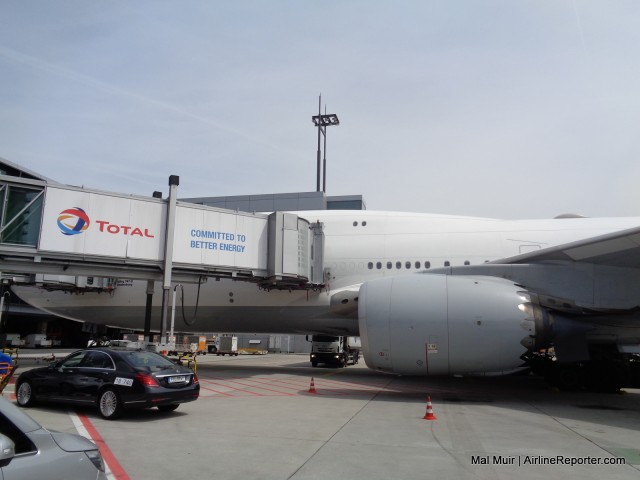 Being dropped off at ground level makes for great photos! This is my ride to Newark.

Lufthansaâ€™s first class cabin, in the nose, feels highly spacious with only eightÂ seats, which are quite large with an 85â€ pitch. Â That’s just over seven feet, which means most people wonâ€™t have a problem lying down.

As I settled into seat 1K I noticed that there was no overhead bins. No worries. Each seat had its own locker near the galley, which wereÂ much bigger (and more secure) than an overhead bin. 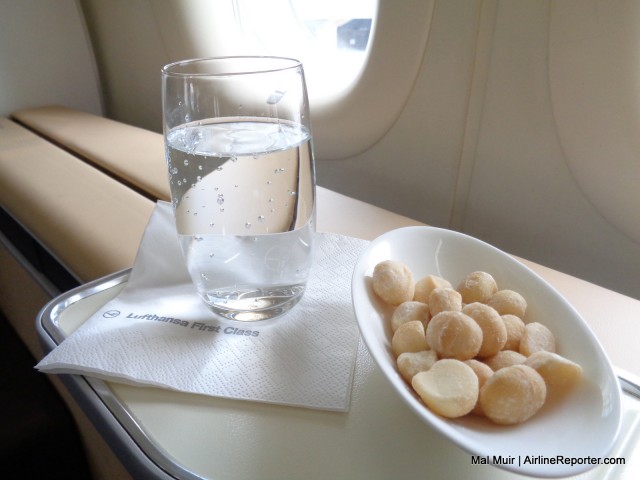 When I returned to my seat, I saw a glass of sparkling water & a bowl of signature Macadamia nuts waiting for me. Â It was a nice start to what would turn out to be some pretty impressive service.Â  I settled into the spacious seat and awaited the flight to close up and get underway.

BONUS:Â Check out the inaugural Lufthansa flight of the Boeing 747-8I

After departure (which was a bit late, as there was a number of flights departing at the same time and we got blocked by another 747) we climbed out of Frankfurt and headed west towards Newark. Â Unfortunately it was bumpy coming out of Frankfurt, and it continued throughout most of the flight.

Once we were in the air, the crew made their formal introductions and also started handing out goodies. Â Even though I already had a pillow at my seat (and a blanket too if I had wanted it) I was given a set of pajamas, an amenity kit, and best of all, a menu. Â This flight offered aÂ full lunch menu, and orders were taken a short while later. 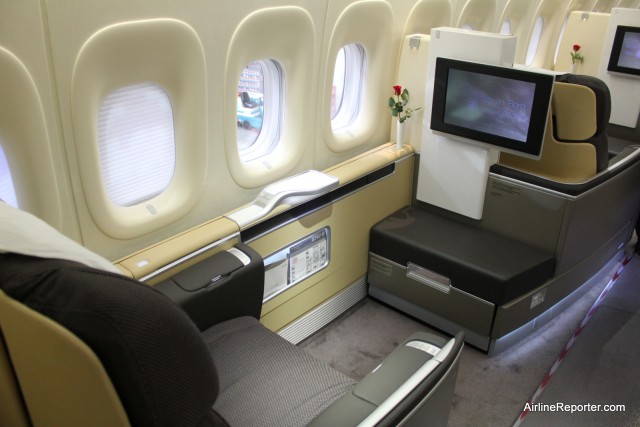 While waiting for my meal,Â I switched on the IFE, which hadÂ a nice large screen (although it wasn’t hi-def). The selection of entertainmentÂ more than madeÂ up for that lack of resolution, and with twoÂ USB ports and a full power outlet, everyone is sorted for their charging needs.

Seat controls could be fairly basic or, by lifting up a cover on the left armrest, quite detailed with many more options. 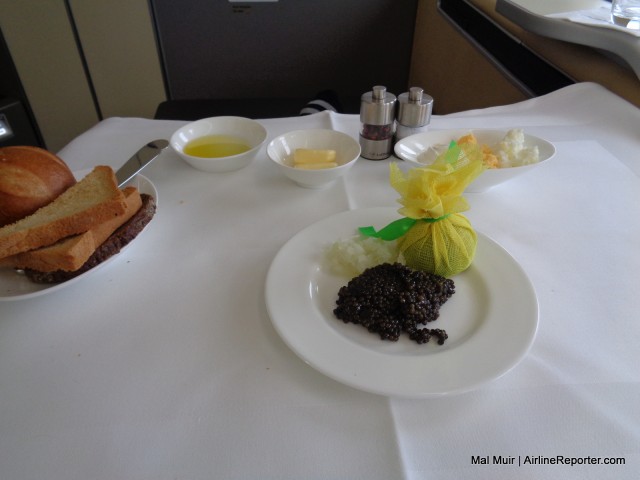 Caviar served with traditional garnishes. I would like to sayÂ I knew how to eat this, but I really had no clue.

Lunch, on this flight, was going to be a multitude of courses. Â Starting with an amuse bouche of Scottish salmon and following on with a selection of breads (with everything from rolls to pumpernickel to pretzels to garlic bread) as the table was set up. Â The next course to come out was caviar and it came with all the traditional accompaniments.

I have never had caviar before, so this was going to be another first for me, but it meant I had no idea what I was doing. I didn’t want to embarrass myself and ask if I was eating it right, I just went ahead and ate it. Â I will say that I wasn’t all that impressed with it, and in the future, would probably pass on this course.

Next was a salad, followed by the starter course which hadÂ three small plates, tapas-style, so I had plenty to choose from. 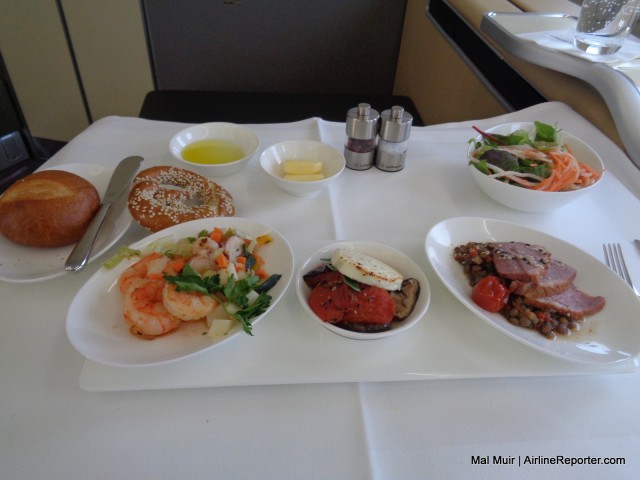 My salad course (top right) and my starter plate, tapas-style.

After the starter came the carrot soup, which was perfection in a bowl. Â As I looked around I noticed that I seemed to be the only person going the full-hog on the lunch menu with people already starting to turn their seats into bed mode. Â A few times,Â the crew checked on me to make sure I wanted to keep going. Â I was already starting to get a little full but I was doing this for the readers, right? I had to keep going!

The main course came up next and it was something I was hoping would be on the menu: spargel. Â Lufthansa has a great policy of having some very traditional German foods on offer in first class.

Spargel is white asparagus and is traditional in Germany. Sort of like how Copper River salmon is special to folks in the Pacific Northwest.Â  Traditionally served with ham, new potatoes, and Hollandaise sauce,Â it is a great combination. 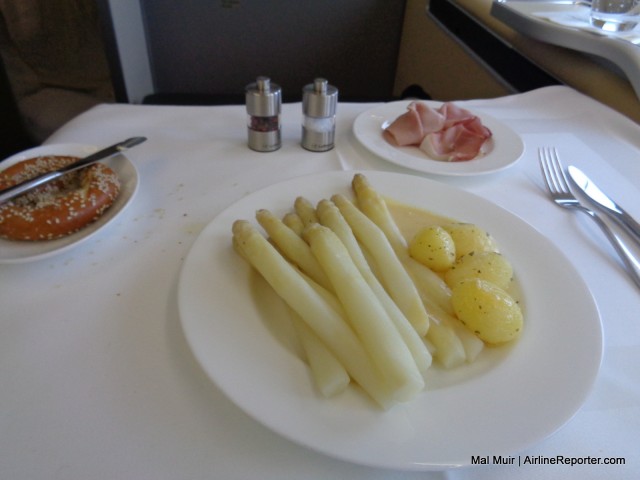 Fresh German spargel in all of its delicious glory. The most amazing part of this decadent meal.

After the main course, I was offered a selection of cheeses and at that point I felt I needed a little break and held off on dessert. I was also the only person not asleep and this meant that I could get that rare treat: double desserts!

I finished off my meal with a coffee and some chocolates, rounding out the meal to nineÂ courses! Â A marathon effort, but totally worth it. 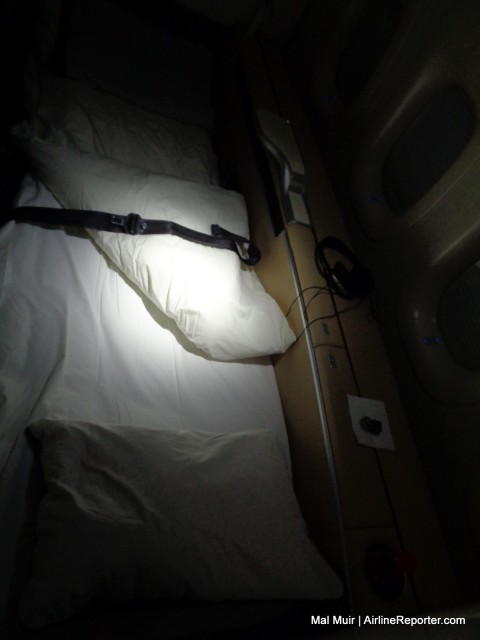 Lufthansa first class seat in bed mode. The comforter was so light and fluffy.

Being a daylight flight across the Atlantic, if I went to sleep I knew I would not have any chance of having a relatively normal sleep pattern. Â So I stayed awake and also tried to stay out of the way of everyone else. Â The crew made sure that I was kept caffeinated and fed if needed (my only request was for some cookies and, goodness gracious, those were goodÂ cookies).

About twoÂ hours out of Newark, the cabin started to rustle out of their slumber and another meal service began. Â Since we would be arriving around 4:00 p.m. they had a salad cart where you could make a choice from numerous hot or cold items. Â This was a great way to have a light pre-arrival meal allowing for a fuller dinner when you make it to your destination.

We began the process of cleaning up our flight for landing, and as the cabin came back to being normal, the reality of the situation started to begin. Â I was going to be finishing off what had become one of my best first class experiences to date.

We landed in Newark, and since I was right in the nose of the aircraft, I got the experience of watching the aircraft being marshaled into the gate. 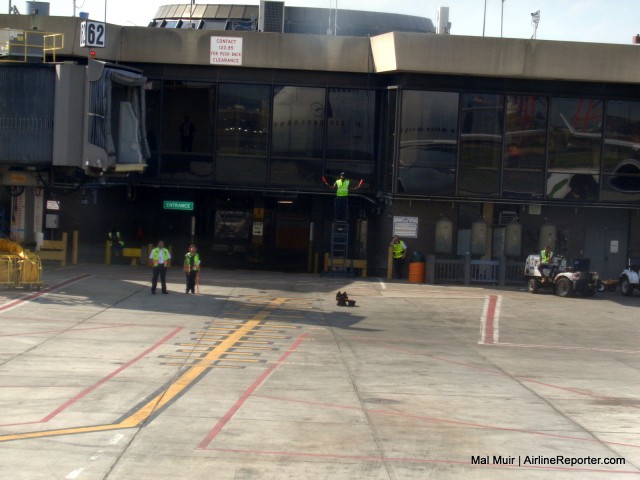 Being guided into the gate at Newark. Not something you can normally see, but being seated in the nose gives a unique perspective.

I was a little bit sad getting off that 747-8I, not only because that the flight was over but more that it may be a while before I get to experience it again. Â This was the best first class flight I have ever experienced, and it was only eight hours long. Â It wasn’t the food, or the seat, or the plane that made that flight.Â It was all of those things, but the thing that really made it was the service.

Nothing was a problem and they did everything to make sure that I wasÂ accounted for. Â They remembered myÂ preferences and made sure that I felt looked after.

The two cabin crew working first that day, Kira and Oezlem, both deserve high praise. Â If it wasn’t for those two lovely ladies, I don’t think this experience would have been as good. I thank both of them for making this AvGeek happy!

https://www.airlinereporter.com
Business Class Reimagined – Why Air Serbia is the One to Beat in Europe
Ethiopian Airlines Inaugurates Flights Between Los Angeles and Dublin
9 Comments

Great pics – the one on the ramp at Frankfurt really shows the size of the engines! I am hoping that you had a top hat on for the caviar course. I would be lost on the course too. Luxury is wasted on me. The Tapas starter looks great – what was the one on the far right?

The caviar course was just different. I am sure if I knew what I was doing it would be different (something my wife chastised me about severely when I returned home). From Left to Right the Appetisers were:

Oh man, great experience but having skipped breakfast and with lunch time quickly approaching I’m kind of stuck on the food, which looks awesome. Particularly interested in the Spargel. I’m a fan of asparagus so I’d love to give it a try. Looks like the food options you chose were generally-vegetarian friendly. Now, about lunch….

The airline industry has transformed at a rapid pace over the last decade with fleet expansion, adding new routes.

I hope Boeing never retires The Queen Of The Skies. Long Live The 747!!!

Just a minor correction: Spargel is not white asparagus but just the german word for asparagus in general.

Thanks for a great write up, Mal. I thoroughly enjoyed it.

I experienced my first 747-8i flight earlier this year, also on Lufthansa. Perhaps most impressive to me was the takeoff – the airplane felt like it was on rails and was just so stable and powerful, and just leapt into the sky. It was different even than a 757 takeoff. It just really stood out to me, and I was wondering if you noticed as well.

Keep up the good work!

Ah, white asparagus (or as Germans call them weiÃŸer Spargel)!

Germans and their German-speaking neigbhours (Switzerland and Austria) are maniac about this spring vegetable, particularly white asparagus. Many restaurants offer this seasonal dish for 15 to 30 euros. During the season, my parents and I have them at least once a week, buying them at a local farm and preparing them at home.

The growing and harvesting season is from late April to early June, depending on the weather. White asparagus is grown inside the levee-like long mounds under the sun-blocking black tarp covers, preventing from turning green if exposed to sunlight. They are grown larger and thicker than green or purple asparagus. The lack of green pigment is what made white asparagus very sweet tasting and very soft that melts in your mouth.

This does not even touch the 747-400 First class. I am EXTREMELY disappointed in Lufthansa for removing their world class First product. This is simply an average product, and their Business class??Ha ha ha