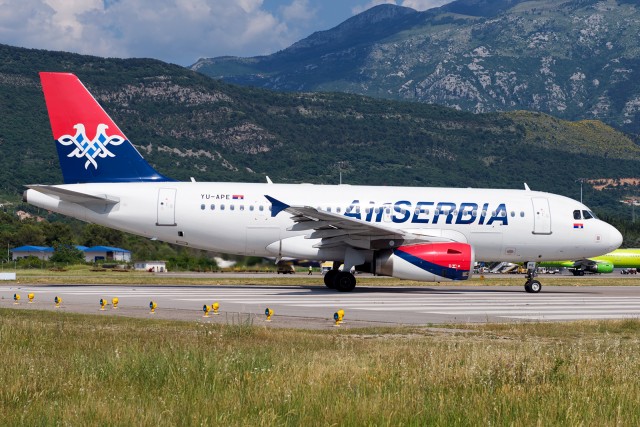 The Air Serbia A319-132 I flew on to, leaving Tivat – Photo: Bernie Leighton | AirlineReporter

There are no non-stops to Tivat Montenegro from Prague, so on a recent trip, I had made my way to Belgrade on an Air Serbia ATR-72-500. On my previous flight, I was impressed with what the airline had to offer in economy on a turboprop and I was very much looking forward to see what Air Serbia had in their premium cabin on an Airbus A319.

I had arranged to learn more about the airline for my review, and when I landed at the Nikola Telsa Airport (TIV), I was greetedÂ by IvanaÂ with theÂ airline. I was quickly escorted to the airline’sÂ Business Club to wait for my next leg. 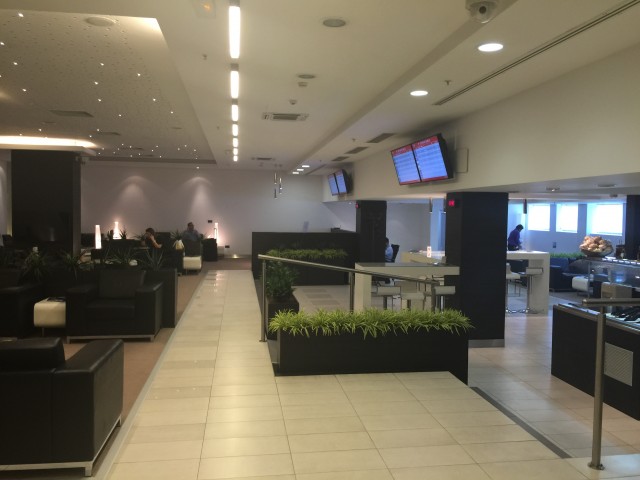 The lounge was comfortable and nicely decorated, but I felt that the food was a little uninspiring. It didn’t surprise me too much, that the lounge was not actually owned or operated by Air Serbia.

I imagine that the lounge will be improved as Belgrade builds its status as a regional hub. 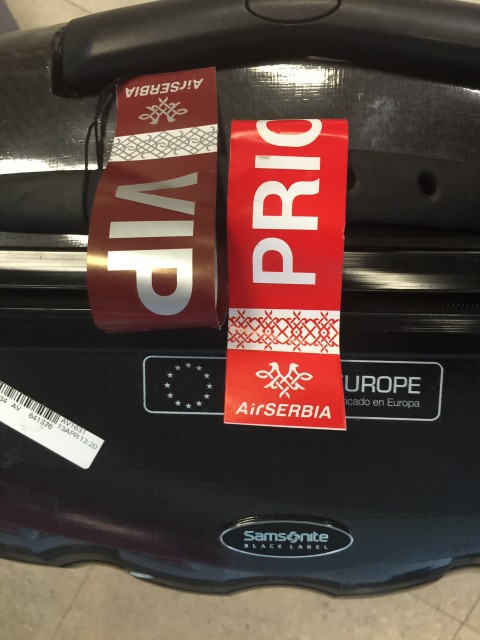 Now those are some good baggage adornments. Going to keep them for my reliquary – Photo: Bernie Leighton | AirlineReporter

Once again, security is at the gate, which is not the airline’s fault, butÂ I’d much prefer truly sterile transits. It was, however, time to preboard the cabin to take some photos. Alas, my camera flash went nuts and stopped working. Not to worry, though, our faithful European Correspondent Jacob Pfleger was on board with me and stepped in to save the day! 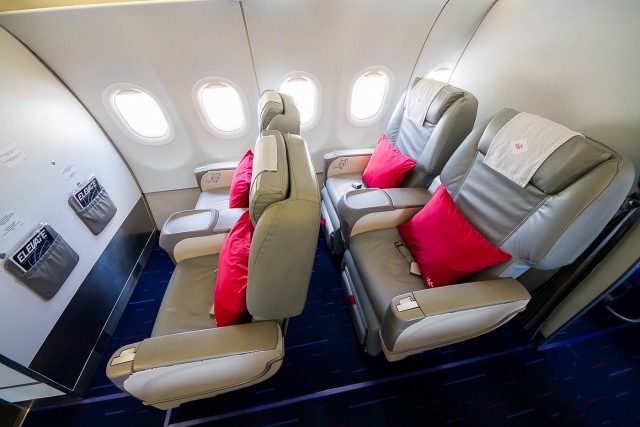 Business class, especially for Europe, is not only generous in pitch, but also recline – Photo: Jacob Pfleger | AirlineReporter

Due to a nosewheel tire change, we had to rush through the cabin to avoid a flight delay, but we did it! It was worth it. As you can see business class looks quite comfortable and there is even a fold-out leg rest.

The pitch is roughly 38″, which is well above almost all the other European narrowbody competition. 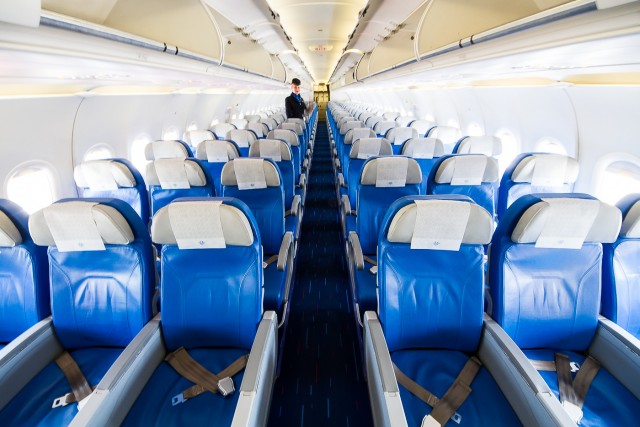 It was then time for the fineries to begin. Remember what I told you about my flash? Still nothing. Thankfully Jacob was there to capture the pre-departure glassware and cold towel. Remember, this is a flight with an air time of 35 minutes — I was impressed. 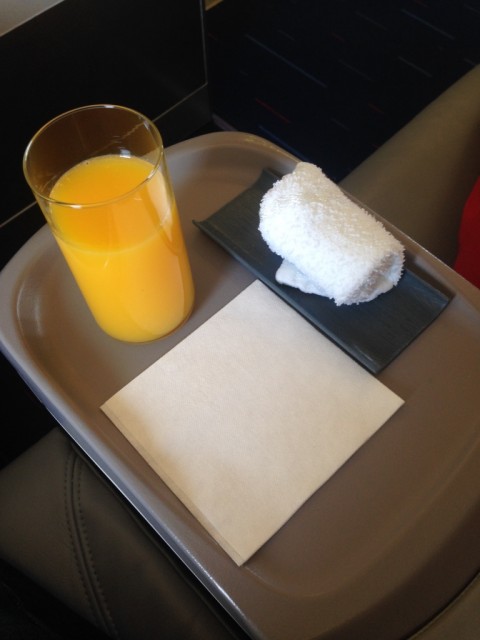 Pre-departure beverages in real glassware, with the potential for refills! Did I die and wake up in airline heaven? Who goes to all this trouble for a 35-minute flight!? Air Serbia, it’d seem.

During the safety demo, we were instructed to use the flight-attendant call button should we need anything. Unlike some airlines where such a press is assumed an error and must be deactivated, we were encouraged.

I thought that when the lead cabin attendant, Gordana, had mentioned a snack that we’d get a cookie or something. Nope, wrong again. 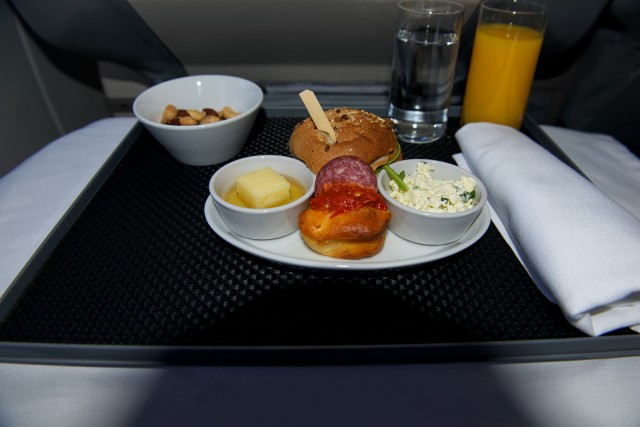 Instead, a high-end snack was provided. I was worried I would not have time to eat all of it!

The goat cheese was outstanding; just the right amount of creaminess and garlic. I’ve had much worse food in fancy restaurants. The corn cake — superb. There was nothing wrong, nothing out of balance. Someone thought hard about how to make a 35-minute flight snack special. It was the best airline catering I’ve ever had. 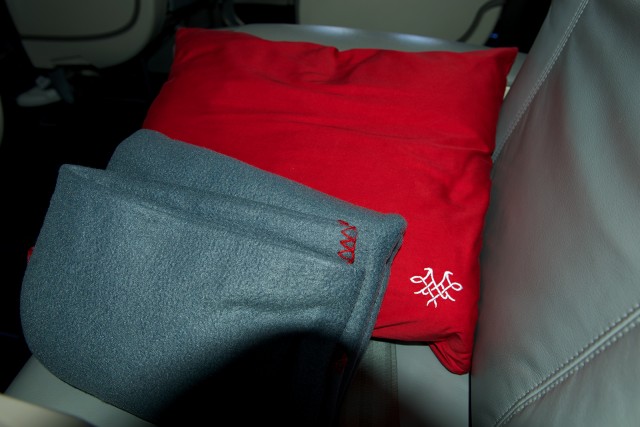 I’ve flown a certain American airline from Seattle to Miami on an overnight flight in business (first) class, and was not so much as offered even the thinnest of pillows. But on this short flight, I was given a nice big pillow and blanket.

Air Serbia is disrupting what we thought could be done in terms of European flying. 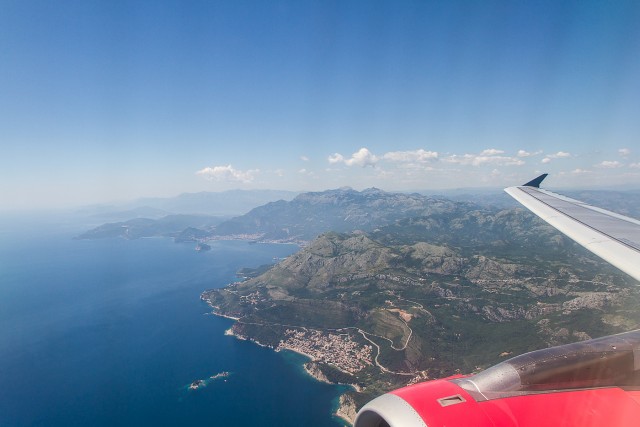 Spectacular views of the Adriatic Sea are offered from all window seats on flights to Tivat – Photo: Jacob Pfleger | AirlineReporter

The pillow was nice, but I wasn’t planning on sleeping — especially with those views from the window! Obscene, really.

Now you may think it looks like something out of the television series Game of Thrones. You are sort of right. Kings Landing, and all cities across the Narrow Sea, are in Dubrovnik, Croatia, some seventy miles away. 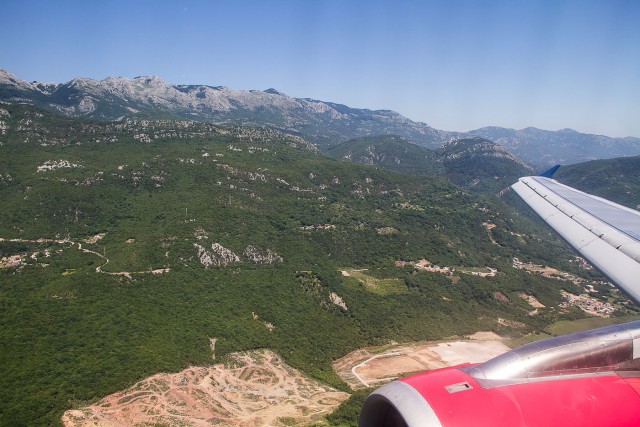 Of course, I actually came here to watch Russian planes, but some people like scenery – Photo: Jacob Pfleger | AirlineReporter

In a flight I did not want to end, we conducted a spectacular approach into Tivat. It’s a complex approach that involves an endorsement as a result of simulator training. Rather hard to describe in words. Much like the rest of the Air Serbia flight. 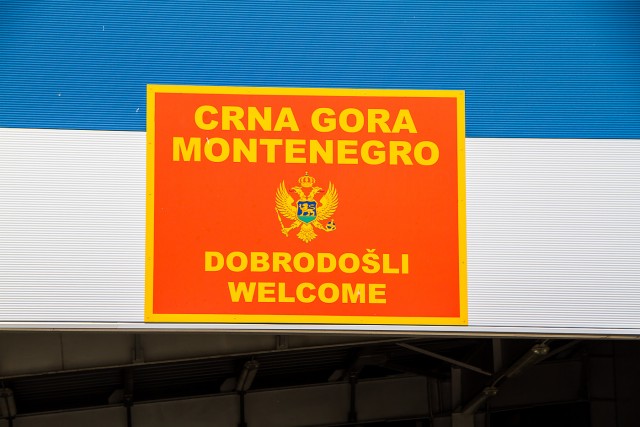 Air Serbia has redefined flying in Europe in all classes. I only wish they flew more places. I’d happily make Belgrade my hub when I needed to go to southern or eastern Europe. Seriously, fly these guys. They’ll break airlines for you!

Note: I had purchased my own economy ticket andÂ was upgraded to business class, by the airline, to conduct this review. All opinions are my own.Â

Thanks for the trip report! I have to agree with you that the biz class lounge ( that one belongs to the airport) is nothing special and that the food is very basic but the Air Serbia lounge is as of now in the construction phase and I suppose it will open within next few months. Belgrade airport is small and functional in my opinion, but there is a section of the airport which is in dire need of refurbishment. Air Serbia is impressive and hopefully they will expand further ( they still don’t fly to Spain) in order to offer more connections.

As a guy who loves electronics (especially vacuum tube guitar amplifiers) as much as air travel, I have to salute any airport named after Nikola Tesla.

And seriously, why can’t more airlines strive to be this awesome? I know want to go to Serbia just to eat corn cake with pepper sauce and salami. That sounds delicious!

Wow, I fly in Europe quite a bit and try to get a better seat and I never realized this airline was so good. I remember your story in the prop plane and I try to avoid those, but if I can fly on a larger plane and have a highend product on a short flight? I am going to have to try Serbia Air out myself here soon. Will let you know how it goes.

Will there be round trip flights chicago via Beograd

New York might be first, but there will be transatlantic on Air Serbia eventually.

If you think that BEG lounge is nothing special, you should’ve seen the one that was there before [up to couple of years ago]. This current one is a great improvement in every aspect.

Although I do agree – it could be better [and hopefully it will].

Great review Mr. Leighton! Thank you for sharing updates on Air Serbia. I would most definitely put them on my preferred airline list.

Do you fly in the states at all? If so, you know that our domestic first class seats are different than our coach seats. Air Serbia is the first I’ve seen with intra-European business seats that truly are business class seats. Usually European biz is just a coach seat with an empty center (some of the time) and a fancy snack/meal. European Biz fares are astronomical. I think you would get a lot of readership comparing the two fare and service classes. It would be eye-opening.

I am AA exec plat, I fly in the states almost more than I fly overseas. I know how terrible Euro J is, and just how much of a rip off it is. It’s even worse when you come off international F and get 32″ pitch and a cold meal to complete your voyage.

Thing is, if you write a negative review of any airline premium cabin- everyone hates it and yells at you. So, it’s an unspoken truth.

Great review! Didn’t expected Air Serbia to be this good this quick. I guess that’s what happens when you’re taken over by Etihad.

Forget the business class on inter-European flights! Air Serbia has – without any announcement – downgraded it to the level of most other companies: ordinary economy seats, with empty middle seat. And they still price it at the 30-40% above the same products of the west-European airlines. I discovered it today (ZRH to BEG) with a great disappointment:-(