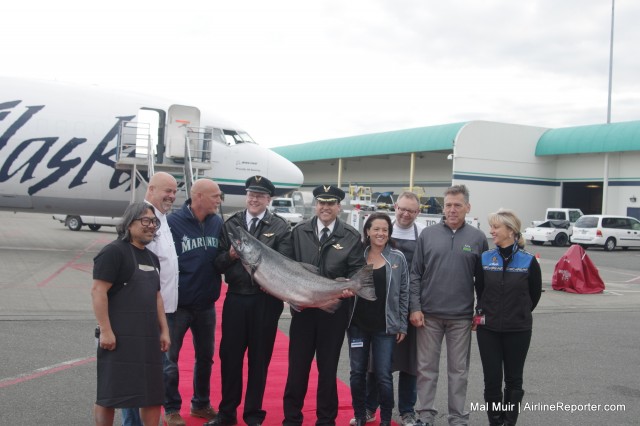 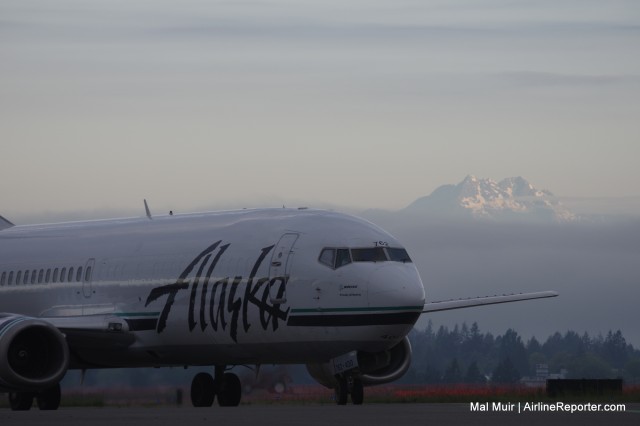 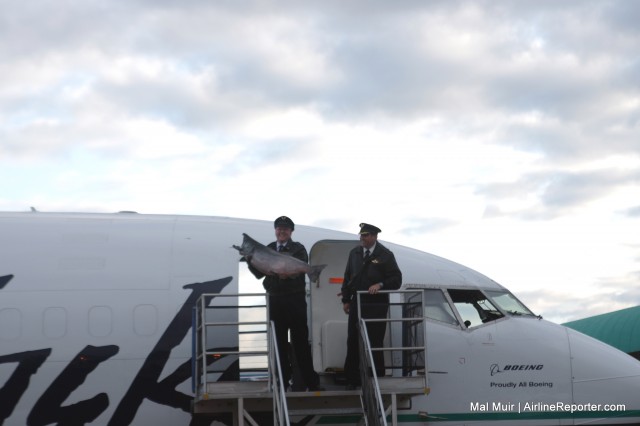 “Alaska Air Cargo is proud to deliver the largest catch of wild Copper River salmon from our namesake to the masses here in Seattle and across the country,” said Betsy Bacon, Alaska Air Cargo managing director. “As the salmon season gets into full swing, our team is prepared to continue to bring fresh Alaska salmon to restaurants and consumers in the Lower 48 and points beyond.” 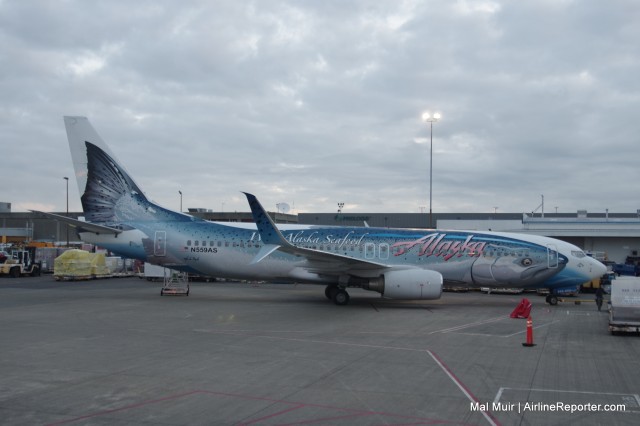 The 737 landed at Seattle-Tacoma International Airport (SEA) a bit before 6:30am, with 18,000 pounds of Copper River salmon on-board. 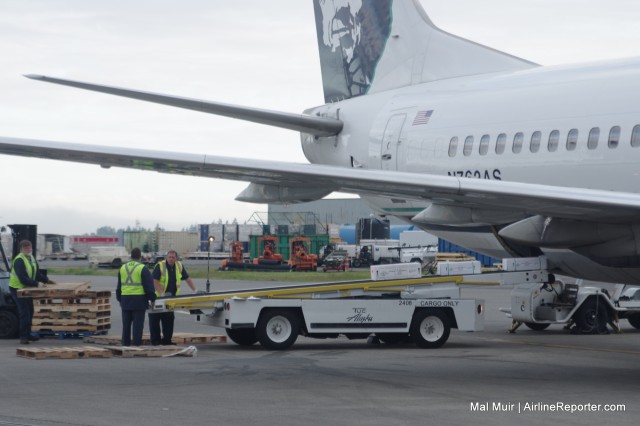 Literally tons of fish are taken off the 737

The fish used today was specially selected and weighed in at 53lbs. It was carried off the 737 by the captain and first officer to be greeted by a crowd made up of elite Alaska Airlines fliers, winners of a Facebook contest, media, airline employees, and some local chefs. 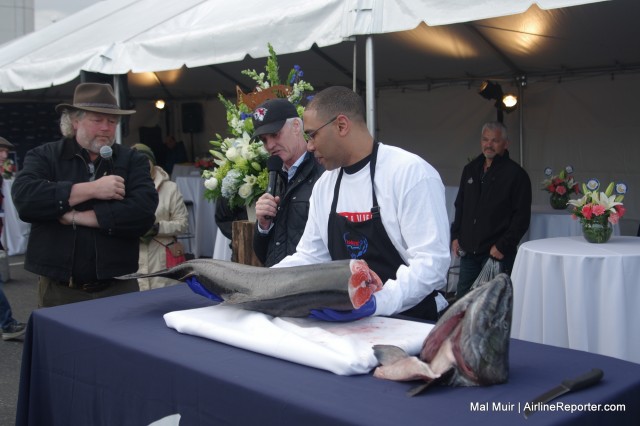 When you are a fish, probably the last thing you want to see are chefs. But these aren’t just any chefs. These are some of Seattle’s finest and their mission was to square off against each other to create the best meal possible in a little friendly competition. 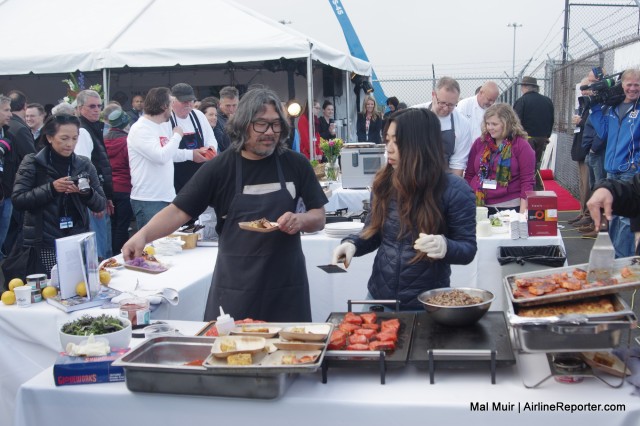 A BBQ with airplanes in the background? Yes please! 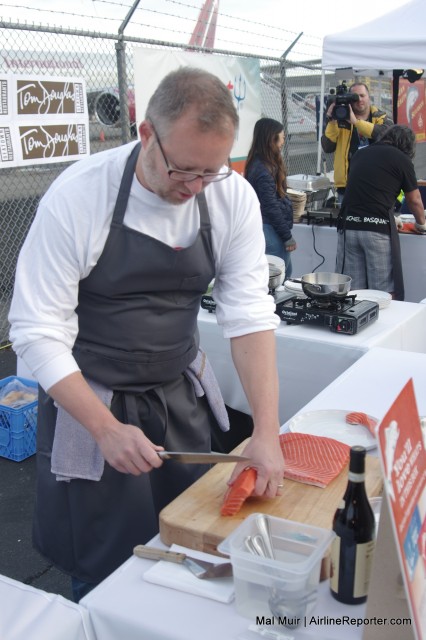 The salmon was quickly filleted and given to the chefs who had half-an-hour to whip up a dish. Once completed, a VIP judging panel did the dirty work of “having” to taste the food and pick a winner. 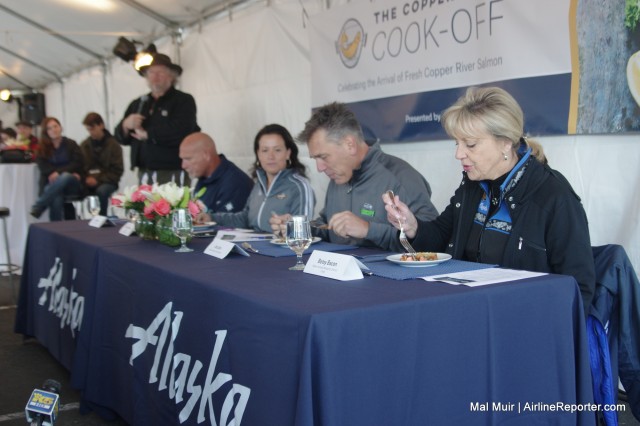 The judges try the different meals to pick the winner 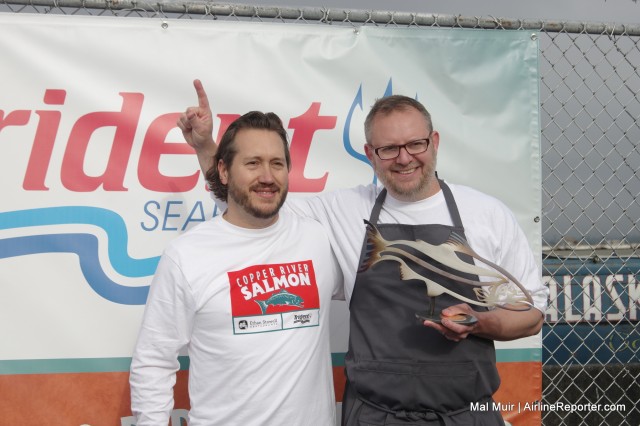 The winner of the Copper Chef Cook Off – Ethan Stowell

After the tasting, the winner was announced: Ethan Stowell. However, I kind of feel like we were all winners of the event, because none of us left with an empty stomach. We were all able to taste some of the dishes and I have to say, that is a great way to start the day!

If you want to make your own special salmon, you can download the recipes from today via Alaska’s website (pdf).

I was just thinking it was that time of the year again. Good eating. I saw an ad for a store here in MN just over the weekend about Salmon season coming soon.

I want to attend this event next year. Make it happen!

I look forward to these posts every year. While a vegetarian, I make occasional exceptions for fish/seafood, and salmon is my favorite. My only question: Where were the hair nets?!