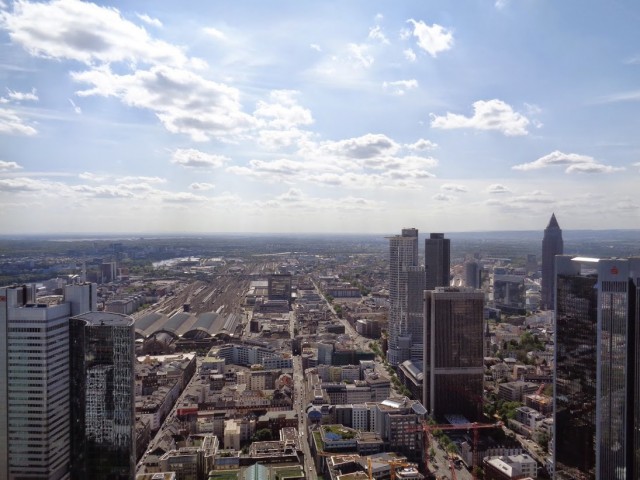 A view of my time in Frankfurt. Great city, but even better First Class Terminal experience – Photo: Mal Muir | AirlineReporter

That’s right, I said terminal, not lounge – it wasn’t a mistake.  Lufthansa has a dedicated terminal to their first class guests who are departing out of Frankfurt.  Not all of Lufthansa’s aircraft have a First Class cabin, and those that do don’t have many seats.  So this terminal needs to feel exclusive.

The only way to access this is to be flying First Class, departing from Frankfurt (there are ways to use it if you just arrived and are connecting onwards, but unless your ground time is more than three hours, don’t bother) or a HON Circle member of Lufthansa’s loyalty program.  You may think that a lot of members that can obtain that rank, but when it requires 600,000 miles over two years… there isn’t going to be many people who qualify. 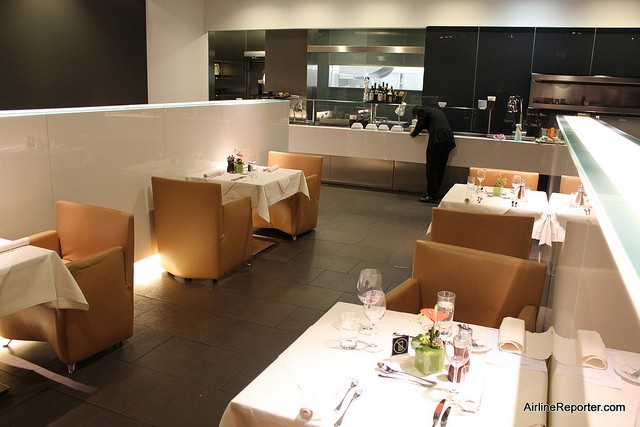 So what makes this terminal so special?  Quite a bit. A full restaurant, serving buffet & a la carte options’¦ check!  A bar stocked with the largest whiskey collection in Europe’¦. check.  How about shower rooms with bath tubs or rooms with a bed and comfortable seating’¦ check.  Feel like a smoke (something you can rarely do at airports these days)? Well, you can do that too, as they have their own well-stocked cigar lounge.  All of this and more equals the best airline lounge you will ever visit.

BONUS: 24 Hours in Frankfurt: Hanging with the Airport and Lufthansa

So how did I end up there? It wasn’t easy. From the moment I first read about it about six years ago, I wanted to try it out.  I wanted so badly to visit that I ended up banking every single Star Alliance mile I could get my hands on.  In the end, I had enough points in my Aegean Airlines account for a one-way flight from Europe to North America.  You need to know, though, that it can be hard to find Lufthansa award space, especially for first class (generally only within two weeks of travel).  I was lucky enough to find some, and took some time between jobs to make a quick trip.  This visit would be a dream come true. 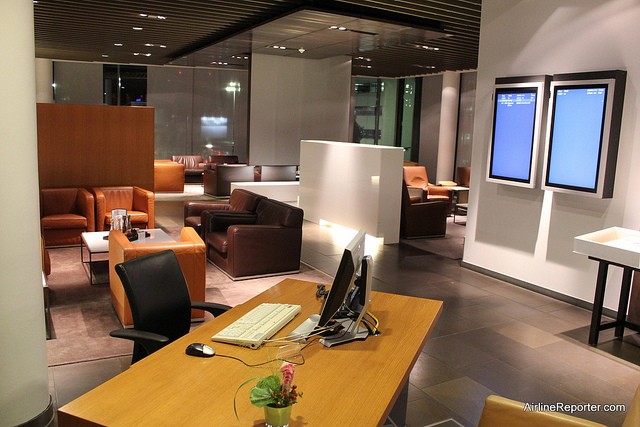 I arrived at Frankfurt Airport extremely early for my visit — I wanted to take as much time as possible in the terminal before my flight.  I took the lift up to the lobby with a few other travelers who had walked over and as I stepped out, I was greeted by Lufthansa staff.

Whomever greets you at the front door becomes your point of contact for your entire stay.  I met the wonderful Antje, and she helped me get settled.  My checked bag was whisked away, my passport taken care of, and I was ushered to the small (yet well staffed) security check point.

Security there was the most pleasant experience I think I have ever had. I was addressed as “sir” and asked questions politely, spoken to in a tone that the TSA would never use.  My first experiences were so far living up to expectations. 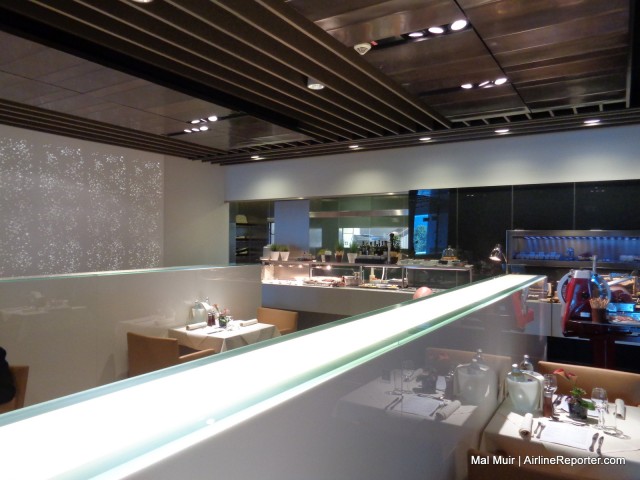 Want to have something to eat in a more formal setting? Well the First Class Terminal has a full restaurant set up.

While I waited on the other side of security for my camera bag to be swabbed for explosives, Antje returned to my side to welcome me to the terminal and confirm this was my first visit.  When I let her know it was, she took me on a brief tour and explained the features. 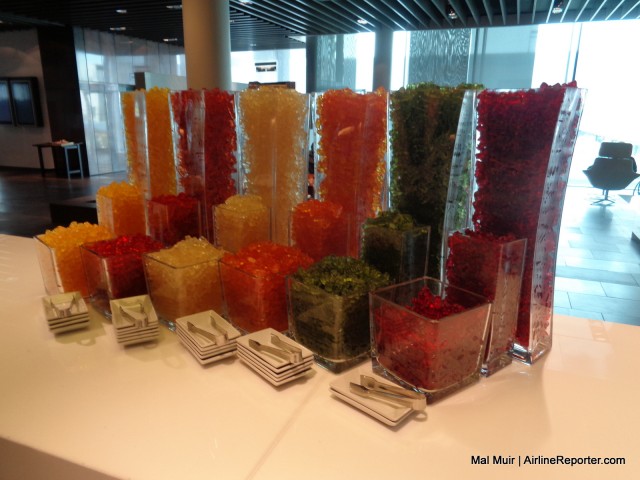 The most magnificent display in the whole of the FCT. Gummie Bears…. I can’t deny that I didn’t have any.

I had surrendered my passport to their staff and they would check me in and bring me my boarding pass.  The Bundespolizei (immigration staff) would take hold of my passport and look after it until we were about to depart. At that point, Antje said that she would come get me and whisk me away downstairs to the departures level.  Until that time, the terminal was my home.  She walked me through all the areas and pointed me in the direction of the restaurant, suggesting I get some breakfast.  Who was I to disagree? 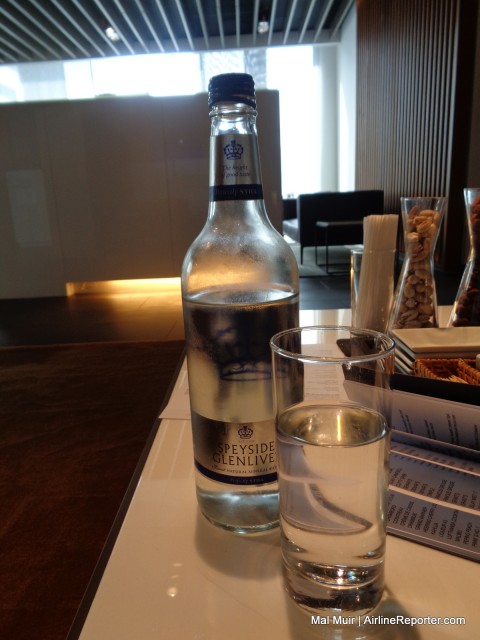 Since I don’t drink alcohol, I might as well drink the water that the alcohol is made from right? The selection of waters in the FCT takes up a full page of the menu!

I sat down in the restaurant, snapping photos of everything around me. Not going to lie — I was a bit giddy!

There was so much tasty looking food on offer that I couldn’t even decide what to eat; it took me a while to work it out.  The food was of exceptional quality, from the Austrian Catering company Do & Co. 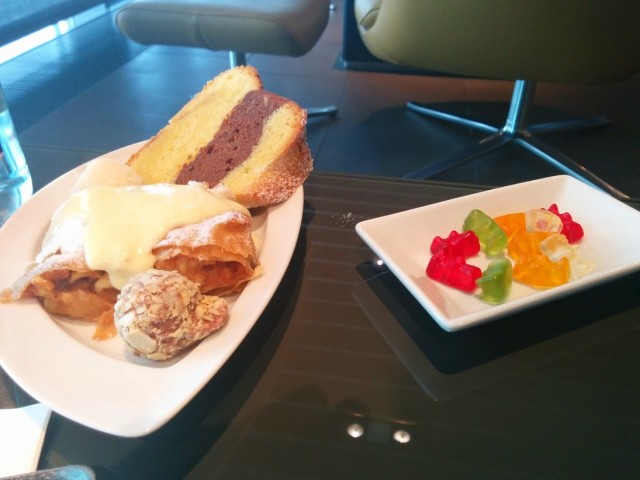 They also offer a wide range of a la carte items to choose from later in the day, including traditionally German items like schnitzel or, at certain times of the year, spargel (asparagus).  But if you are going to eat, surely you are going to need liquid refreshments as well. 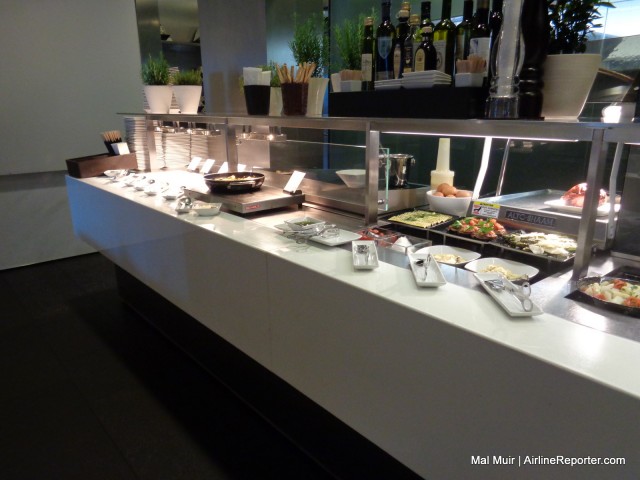 Well, they will bring that to your seat anywhere in the Terminal, or you can head up to the bar.  I ended up sticking to water while in the lounge, not because I didn’t want anything else, but more because the water menu alone was a single page of the drink menu.  I chose the same water used for Glenlivet scotch – if that isn’t first class, I don’t know what is. 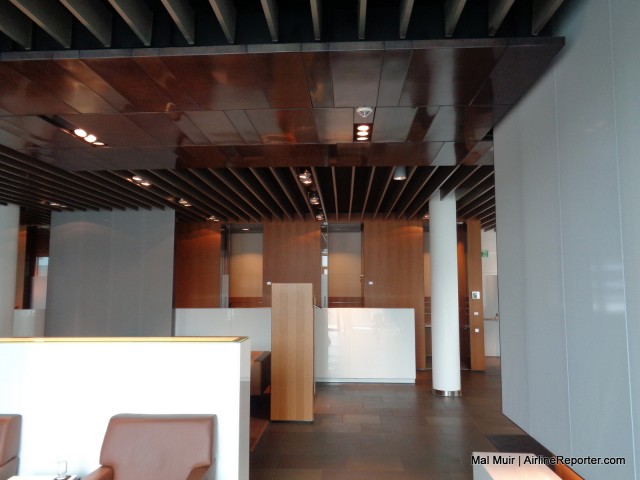 Those doors at the back are private offices available in the FCT. You can work and take calls in private, something you might want to do before your flight.

While I ate my breakfast, Antje returned with my boarding passes for my flights and let me know roughly what time she would come to get me for boarding.  She also checked to see if I needed anything.

The lounge has so many different seating areas you should easily find something to suit your mood.  If you want to use an office to work, they have them as well.  I found a comfortable couch and got through my work with ease.

After finishing my work, I went off to relax a little, and I found a great seat by the window (sadly, no aircraft views from this lounge, just of the Lufthansa HQ). I did a bit of people watching while I read. 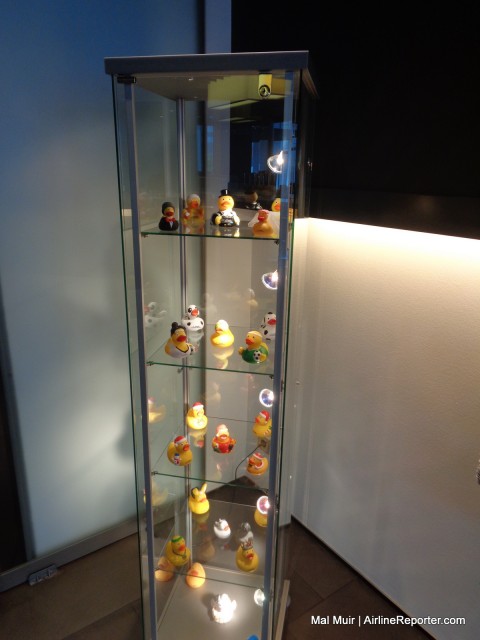 A collection of the famous Lufthansa First Class Ducks. They have special versions for different times of the year.

I also managed to check out the shower rooms and claim myself a famous Lufthansa First Class Duck, something that is a bit of an icon around the world. I didn’t end up taking a bath. 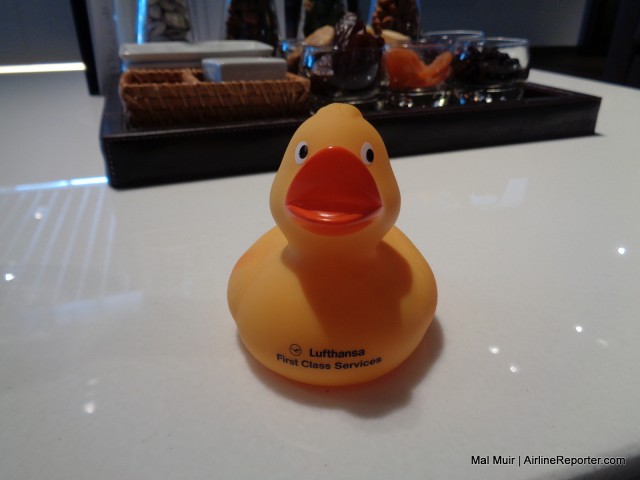 This Lufthansa ducky chose me!

As my time in the terminal came to a close, I packed up my gear and got myself ready to go.  I still had one last experience of the First Class Terminal to go.  Since the FCT is separate to the rest of Frankfurt Airport, you can’t just walk to your gate. You get driven to your plane from the lower level. 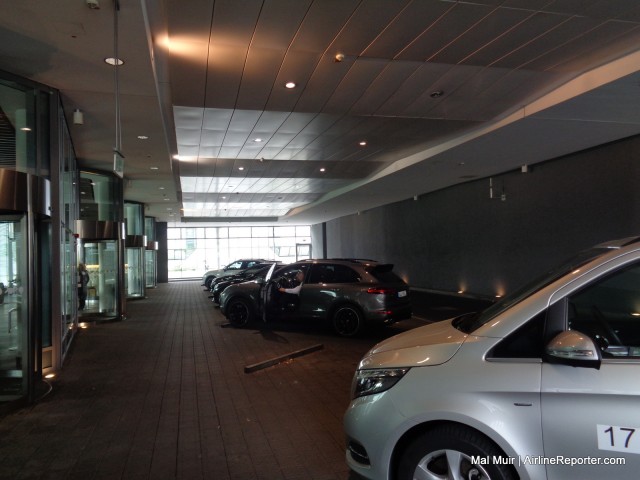 No walking to the gate required. The FCT has its own fleet of vehicles to drive you to your plane.

Antje came to collect me and took me downstairs to the passport control desk, where I was stamped out of the European Union. From the desk, I was taken to meet my driver and Antje said her final goodbye. 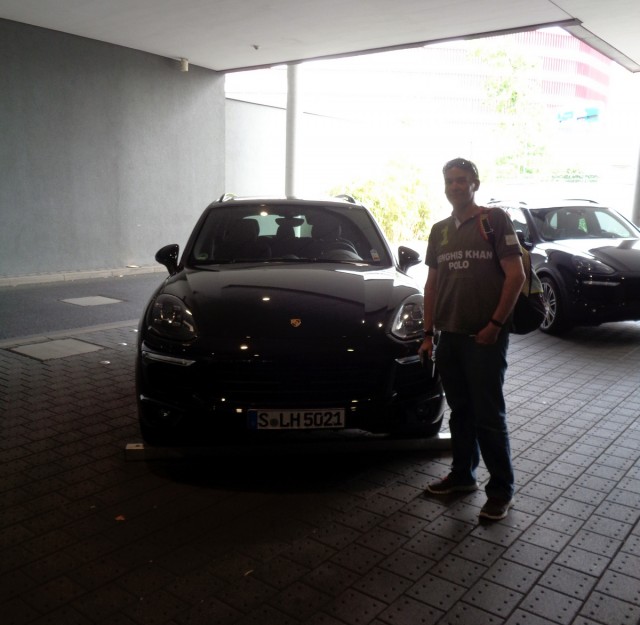 Me and a Porsche… unfortunately, not what we rode in

Lufthansa uses a wide range of vehicles to get you to your gate, depending on how many people are going to that same flight.  Sadly, because I was not the only person headed to the flight, I ended up in a Mercedes Vito minivan (although it was luxuriously appointed).  If it is just you or another person, you may be lucky enough to get a ride in one of the many Porsche Cayennes they have on fleet. 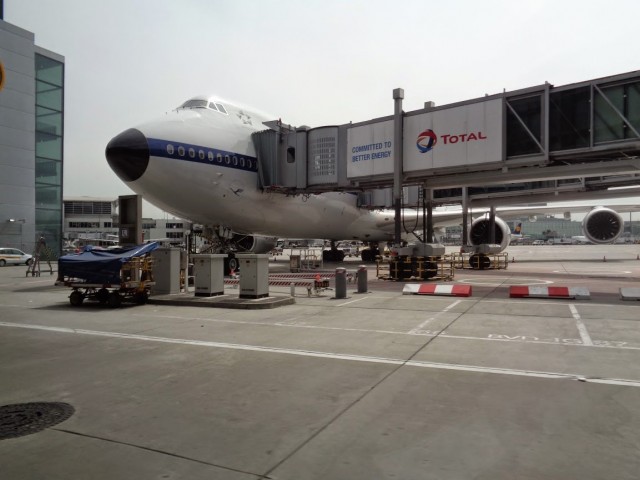 I was driven past the retro liveried 747-8I, hoping it was my plane — but no – Photo: Mal Muir | AirlineReporter

Looking back now on those few hours I spent in the FCT, I wish that this is the way that all flights could begin.  It doesn’t need to have the most amazing food spread, or free massages, or anything like that.  It is all about the service.  The feeling of utter relaxation to know that you won’t miss your flight, and that you can just sit back and forget about all those stresses associated with flying somewhere.  Or, if you really need to get some business done, you can do that too.

The Personal Assistants are there to make sure you get where you need to go and that everything is taken care of.  Knowing that Antje had my back for any problems that might occur (none did) took a load off of my shoulders.  I look back at that time in the lounge and I have to say that I had the most relaxing experience.  I have visited many airline lounges in this world, but have to say that the FCT is by far the greatest.

https://www.airlinereporter.com
Air Serbia: Shockingly Amazing Economy Experience — on a Turboprop!
Flying on a Antonov An-12 for a Second Time. Even An-12’er.
6 Comments

The food was really Good. Mind you I was mainly there over breakfast, it was still amazingly tasty.
The whole terminal feels like a high end hotel though.

As for the retro, well we did cover that earlier:
https://www.airlinereporter.com/2015/02/photos-lufthan…l-retro-livery/

Do you think Luthansa first class is on par with SIngapore Airline’s Suite class?

I haven’t flown Singapore Suites class, yet. So I couldn’t give a direct comparison. What I find is that no two airlines are the same in the realm of First Class and they each have their own characteristic. In my experience so far the best Ground Experience & Lounge experience goes to Lufthansa.

The separate bed F on the LH 744 was the best F I’ve flown so far. The new seat that is on the other aircraft is not as good as SQ’s “suites” product. I use quotation marks now as the marketing seems outdated, especially considering how the product has been outclassed on airframes smaller than the A380.

The best First product, of course, belongs to neither of those airlines. You didn’t ask what the best was, though.