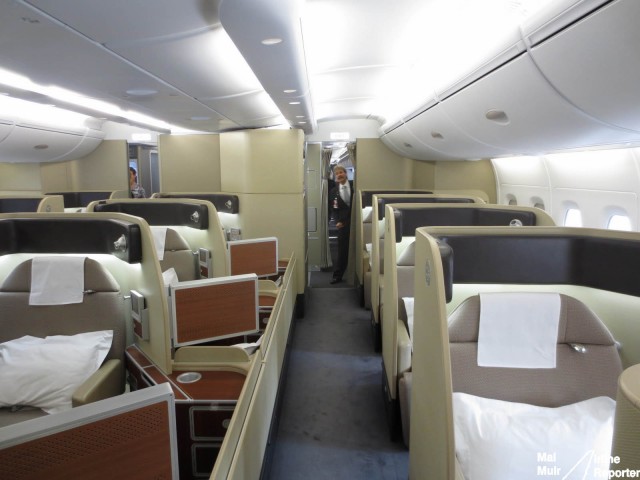 Getting photo-bombed by the Flight Service Manager, this is a good sign of a great crew! – Photo: Mal Muir – AirlineReporter.com

The First Class only contained 14 suites which gave me plenty of personal space.  The suite itself was amazing;  Open yet private at the same time.  It doesn’t have closing doors like Emirates or Singapore Airlines but then it didn’t need to have them. It was as if Qantas had made the suite just for me.

With a 1:1:1 layout, you have quite a good chance of getting a window seat. If you are travelling with someone else you would want a K seat with the middle, as the middle opens to the right hand side not to the A (or left side of the aircraft).  Want some privacy?  A seats are the ones to choose!  I was sitting in 2A (which was recommended to me by a number of people). 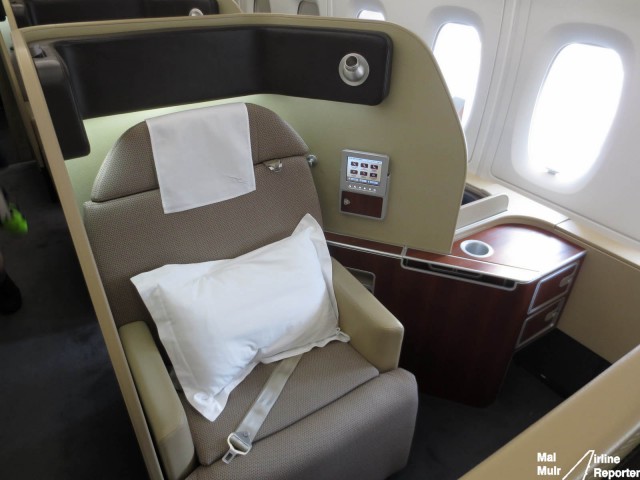 It was easy to get settled into my seat. The crew was not only there to greet me, but also help me stow away my things and get comfortable. During boarding I was offered top end champagne (yes the real stuff from France) like Tattinger or Pol Roger Winston Churchill. The drinks were served with some almonds and some olives making me feel special before even leaving the ground. 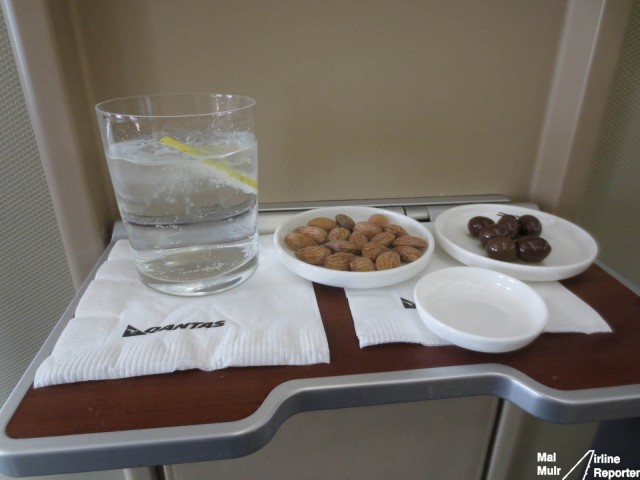 Pre Departure Beverage of Choice with some Toasted Almonds & Marinated Olives, what a way to start a flight! – Photo: Mal Muir – AirlineReporter.com

Then came all the goodies:  An amenity kit filled with Payot Skin Care products (though these will soon be SK-II products as Qantas just announced days earlier of changes to the First Class amenities) and even some some pajamas and slippers. There was no need for me to get my street clothes dirty and they are even willing to hang up any clothes so that they are ready to go when you arrive to your destination. 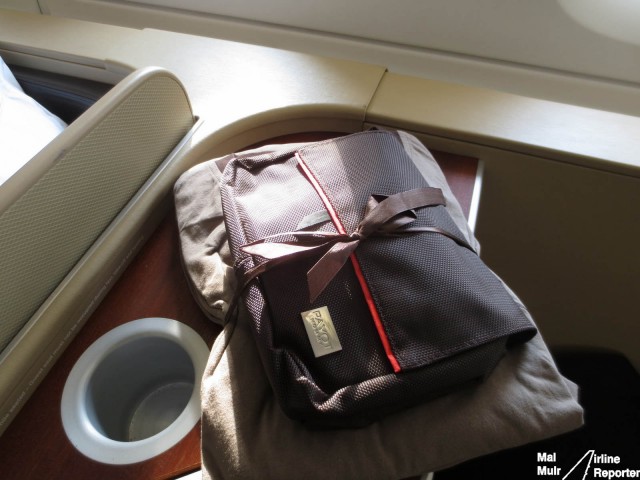 Ready for the flight? Not without the Payot Amenity Kit & your First Class Pyjamas! – Photo: Mal Muir – AirlineReporter.com

I looked around at my seat.  At that point it was in the ’œtake off/landing’ position. However once airborne, the seat rotates allowing you to stretch out.  Once rotated, the set can turn recline into a flat bed almost 7ft long!  With a 17’ high definition screen, lots of storage space for all of your bits and pieces, I was excited this was my home for the next 14 hours (it should have been 15 but unfortunately we got tailwinds across the pacific).

As the A380 pushed back and started its taxi towards the runway, I switched on the skycam [camera in the tail of the A380]. It was at that moment I realized the one and only complaint I had about the suite and flying first class with Qantas.  As an AvGeek, one of my joys of flying is looking out the window, seeing all the amazing aircraft around you.  Spotting that one special livery or that airline you have never seen before.  Even though each suite has 2 very large windows on the A380, you are just too far away from them to actually see out of.  But that’s where the Skycam comes in handy.  Sure you can’t see out the window, but you can see the entire A380 as it lifts you into the sky! 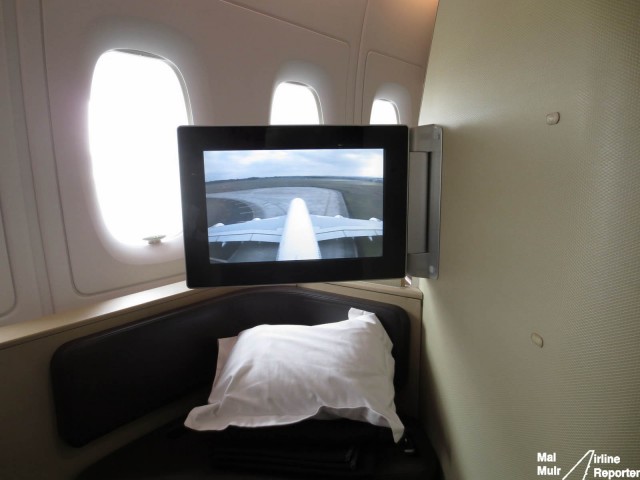 Can’t see out the windows? No problem you have the Skycam – Photo: Mal Muir – AirlineReporter.com

Once airborne and with my seat in ’œrelax mode’ I was ready to enjoy the longest A380 flight in the world, almost 8000 miles was ahead of me and 95% of it, open ocean.  I was in heaven! Part 3 will be shared shortly. Stay tuned.

NOTE: These stories were written on a flight that I set up myself using my own personal Qantas Frequent Flyer Rewards Points. All opinions are my own.

https://www.airlinereporter.com
Growing up in the Shadow of John F Kennedy Airport
Epic AvGeek Photo: Dreamlifter Lands with AN-124 in Background
10 Comments

Nice writeup, question, is the skycam available for the entire duration of the flight?

As far as I know yep. The thing is during the night, no one is going to switch it on, especially over the pacific as all you are going to see is black, black and more black.

So not entirely sure.

The skycam is typically available the entire flight. It is cool to watch at night if there are large thunderstorms ahead, as you all you can see is the flashing anti-collision strobes and the full silhouette of the aircraft against the illuminated sky. Seat 2A is my personal favorite on the QF380, although any of the A seats are great. I wouldn’t say no to any of the others though!

I agree that plane spotting while taxiing is impossible on these flights though, especially with the shoulder strap they make you wear for takeoff/landing. Looking forward to Parts 3 and 4.

Just wondered if the skycap is available to everyone…even Economy. .?

Yep the Skycam certainly is available to everyone onboard. All seats have the same video system (just obviously a bigger screen in First).

Skycaps on the other hand, that’s an American thing 😉

Thanks for the heads up ! I’m about to embark on a similar journey in about 12 hours and I’m very excited to share the same experience.

Hey Kim. I know you will enjoy it… Have a great time on the flight.