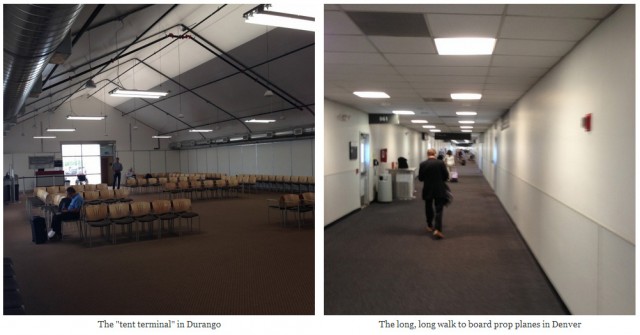 After my experience, I can tell you that the problem with offering a first class product on such a small regional aircraft is that the airport/ground experience just isn’t up to snuff. Â As I said above, really what you’re getting is a little better hard product, but the soft product (food, drink, experience) just can’t more than marginally better.

In Denver, the regional gates at the far end of the terminal are a zoo. Â There aren’t enough seats, or staff for that matter, and they generally are boarding four flights at one time, though a single door. Â At the same time, arriving passengers are coming out through that same door. Â It’s a cluster. 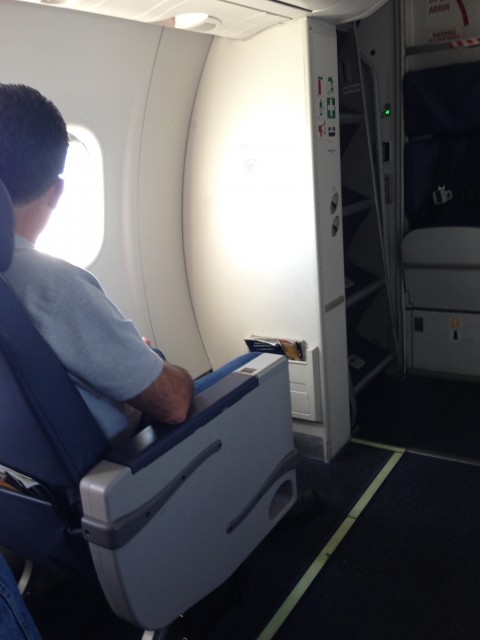 So, while I can’t say much for the service/experience, I do have to say that the Q400 was a very comfortable bird. Â The cabin width is much better than an Embraer ERJ-145, and it feels roomier than a CRJ-200.

While SeatGuru says that the first class seats are the same width as economy, their records are not accurate; the seats were noticeably wider, and configured in a 1-2 row as opposed to economy, which was 2-2. Â I noticed no discernible difference in noise or vibration from the turboprops, as opposed to other small regional jets I’ve flown. 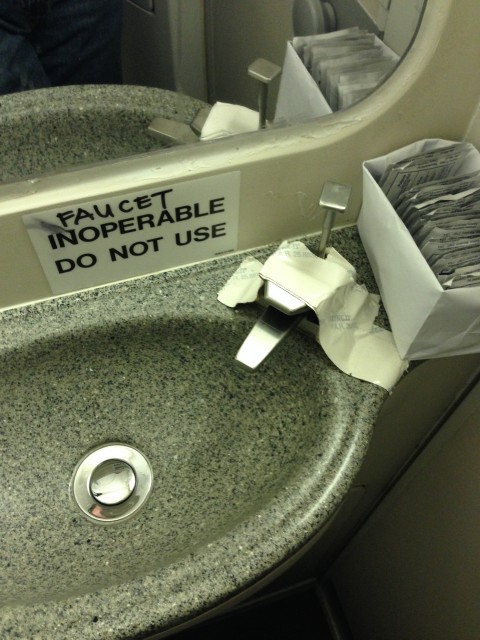 Ultimately, for such a short flight (only slightly over an hour), where I sat didn’t really matter. Â I was in an Economy Plus seat on the way home, and found it plenty comfortable for the quick hop. Â Unfortunately, I had to pay for my beer.

I’m not sure of the economics of United offering a first class product on these types of planes. Â In their all-economy configuration, these planes hold 74 passengers. Â Three people doesn’t sound like a lot, but it’s a 4.2% capacity increase. Â For what it’s worth, on both legs, there were zero passengers booked in to first; they were all upgrades like me. 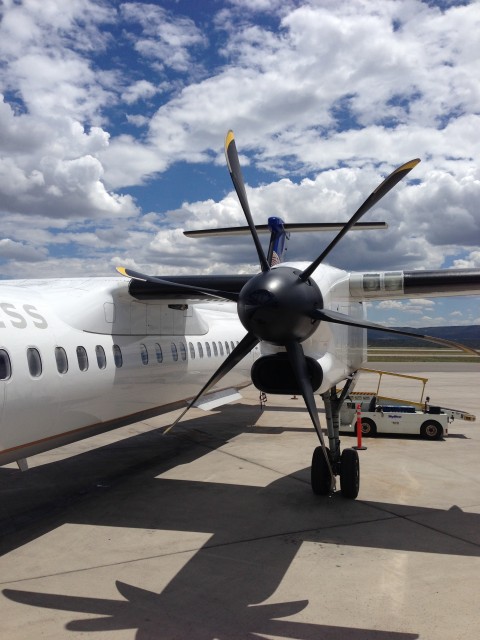 Probably the best part of my flight was my seat mate in 2D. Â He was a commuting United Airlines 777 pilot, heading back home to Durango after a trip to and from Sydney, Australia. Â We talked about the continuing work on the United/Continental merger integration, and he mentioned how much happier economy passengers are on that route, now that United swapped out the 747-400 (with no personal in-flight entertainment in economy) with the 777-200ER.

Talk about a long day, though; he started by flying a jumbo jet across the Pacific, and ended on a prop plane bumping over the Rocky Mountains.

Any more pics of the cabin? Really hard to get a sense of what the F cabin looks like.

Hi Clay – I don’t have any more pictures (I boarded late) but found some more shots in this review from a few years ago http://brians-travels.com/united-express-republic-airlines-bombardier-q400-review/

Absolutely hate the Q400s, even with F installed on them. Now that we’ve been so fortunate to have them replace most of our flights from MCI-DEN (sigh), I’ve had a few occasions where I’ve been stuck taking one, vs. the E170 or CR7 that it had replaced.

The Qs fly lower, slower, and are just an uncomfortable experience. Even with Bose QC15s, the vibration is quite annoying. Hopefully UA will bring back some ERJ-145s on the route, or even some more mainline.. What used to be multiple daily mainline flights from MCI is now an RJ :/

As someone whose airport is only served by regional planes, I can assure you the Q400 is definitely better than the CRJ-200 in Y.

Being an employee for a regional carrier, and the Q400 being our only aircraft, I can not see us ever doing this!!! Sounds great on paper , however , the 400 is a comfortable ride at any time. I always tell my customers when they are seeing seats 1 or 2 on their boarding pass, and thinking it is First class, that all of our seats on the Q400 we consider first class!! All the seats are leather and , yes we offer free beer and wine on most segments!

I work for a regional carrier in the pacific northwest that uses the Q400. There are lots of pros and cons for this aircraft. When it is working, it is a money making machine BUT it is a maintenance PIG. It takes alot of work to keep it flying. Don’t get me wrong, it is safe and airworthy but LOTS of manhours and money go into keeping it that way. Yes we do offer free wine and beer and snacks on all of our flights. We do have a pretty good product to give to the public as long as it is managed properly. The aircraft has it’s issues but it’s the people behind the scenes keeping it flying and making it happen. It’s just too bad that our once great name was destroyed and “they” put an eskimo on OUR airplanes!!

Despite living in DEN now, I grew up in PSC and have many fond memories of bumpy Dash 8 flights to Seattle on QX.

Fine way of telling, and fastidious piece of writing
to get facts concerning my presentation subject, which i am going to convey in school.

If you fly Horizon (AS) regional you get the beer or wine free in J.