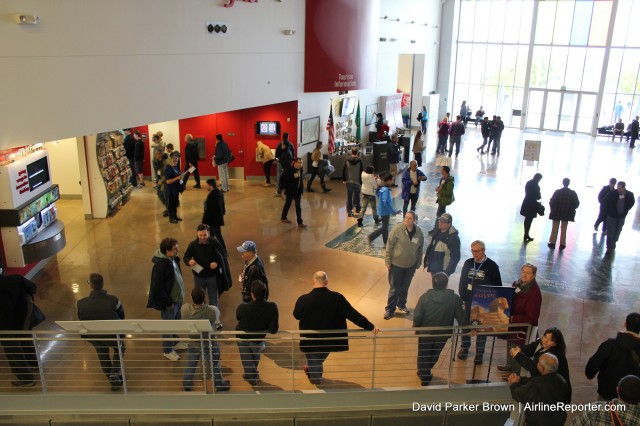 Gathering of the AvGeeks at the Future of Flight

I wanted to also try and stop by the Flying Heritage Collection and Historic Flight Foundation, but I felt I needed to head over to the HQ for the day (the Future of Flight Aviation Center & Boeing Tour) to make sure everything was prepped for our big day.

After getting everyone checked in and settled, I was able to say a few words to the group and thank everyone for coming. I think it was pretty obvious to most there that I was giddy. There were so many new people I wanted to meet and so many others that I have seen many times before and couldn’t wait to reconnect with. It is no lie that the people are the best part of this event – and that says a lot.

We soon divided into four groups and went to our different tours. Two of the groups headed to the Everett Factory for their VIP floor tour, another headed into the Passenger Experience Research Center (PERC), and my group started with getting close to a 747 Dreamlifter (and no, it was not the one that landed at the wrong airport). 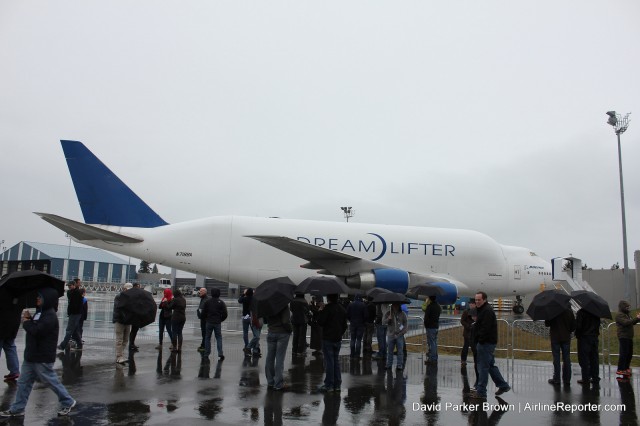 Originally we were planning on getting a tour of the Dreamlifter Operations Center, but that unfortunately fell through. To make up for it, Boeing held a Dreamlifter next to the Future of Flight for us to view from the ground. I think most people were much happier getting up close and personal to the unique aircraft than looking at a cargo facility — at least I was.

BONUS: What is an AvGeek? I am an #AvGeek & Hear Me Roar! 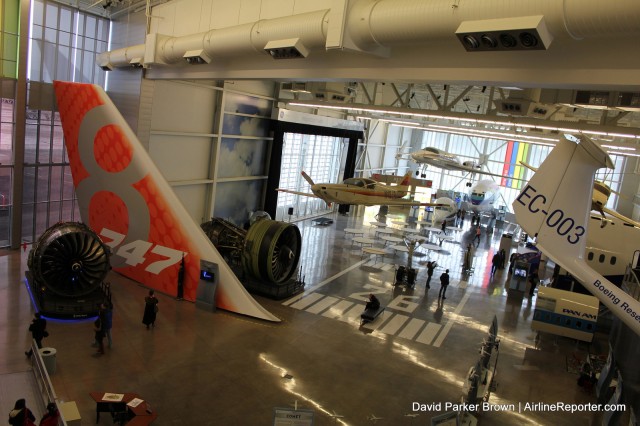 The PERC is located on the gallery floor of the Future of Flight.

Once our wet and cold group reassembled inside, it was our turn to check out the PERC. This is the place where Boeing can get customer feedback (they pull people visiting the Future of Flight and doing the Boeing tour) on potential interiors.

We weren’t told which potential cabin configuration we were looking at, but it was in a 3-4-3 layout and we watched a Boeing 777x video. I surely hope that some of the things we saw in the cabin (and especially the video) will show up in future aircraft. 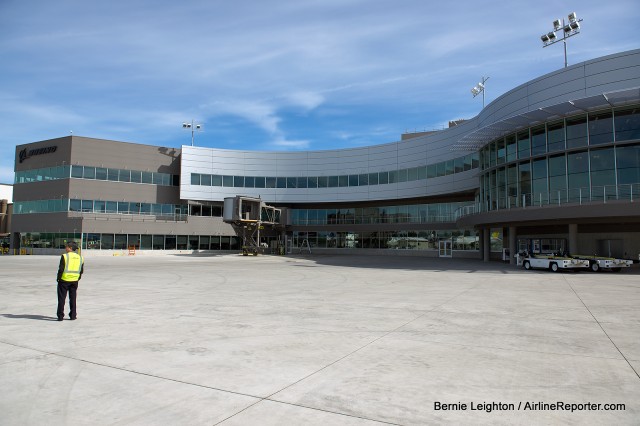 The outside of the Everett Delivery Center taken during a previous event in Sept. 2013, when the sky was actually blue

Next to we were off to the Delivery Center, which was the only place where we could not take photos and didn’t have a Boeing photographer. No worries, we were still able to enjoy the experience just the same. 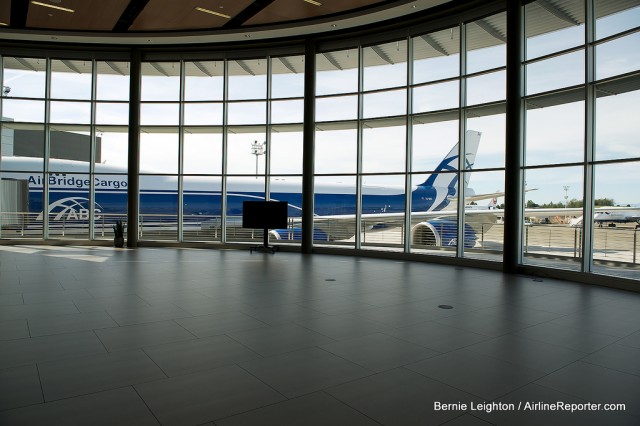 View from the central meeting spot of the delivery center, taken during a previous event in Sept. 2013

We were escorted through the front door and taken to the the central events room, which provides sweeping views of the flight line. Then we were taken on the outer balcony and were able to see the flight line up close and personal.

Then it was back on the bus to head on over to the factory for a VIP floor tour. 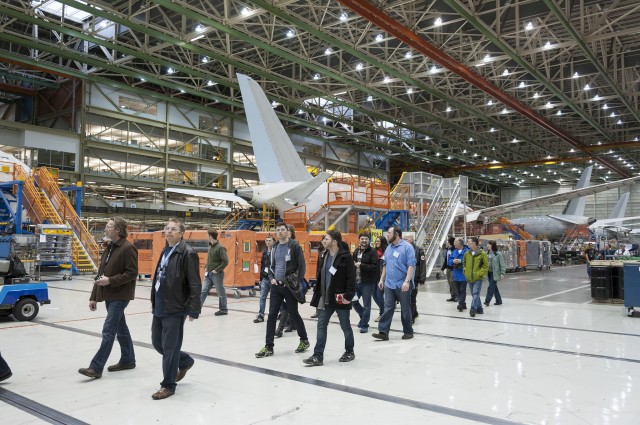 Before heading on the floor, we received a safety briefing and all were given a head-set and safety glasses. Not the most stylish things in the world, but I like being able to keep my vision and hear the tour. 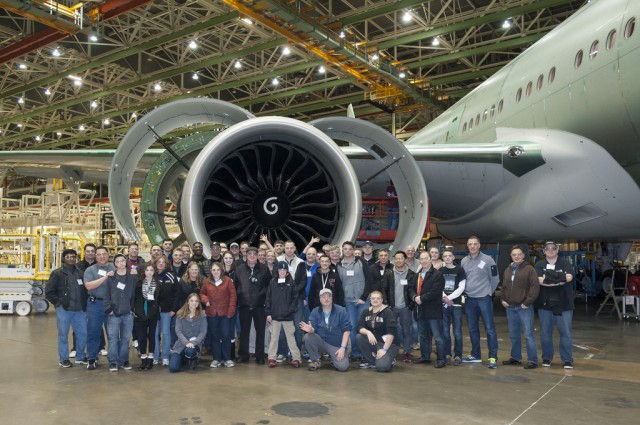 One of the #AGF14 groups standing in front of a GE90 engine on a new Boeing 777 – Photo: The Boeing Company

Unlike the standard public tour, which is up on walkways above the floor, we were on the floor, right next to the airplanes. I ended up spending most of my time talking to others around me about airplanes and what better place to do that than on the factory floor?

After the tour, it was back to the Future of Flight for our social gathering (beer and pizza) and we gave out some great prizes donated by different airlines. Our big thanks to the following companies who donated some sweet prizes (that put LOTS of smiles on faces): 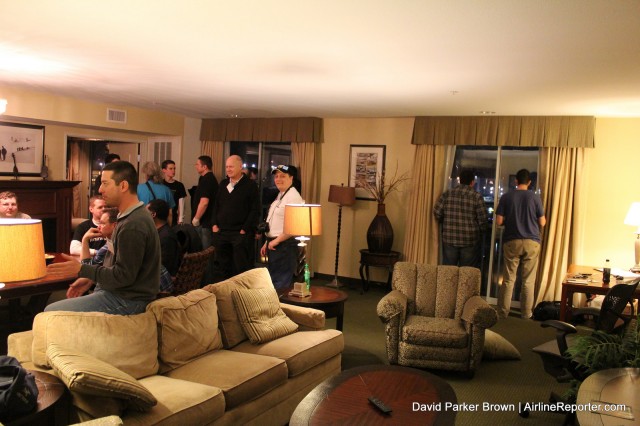 It is a good thing that the room was so big. People chatting and plane spotting.

After the event there was a post-AGF social gathering in the Presidential Suite at the Hilton Garden Inn next door, to which about 30-40 AvGeeks showed up for some awesome conversation and we all ran to the windows a few times to see what was taking off. I was asleep by about 1:00am, and ready to hit day two. 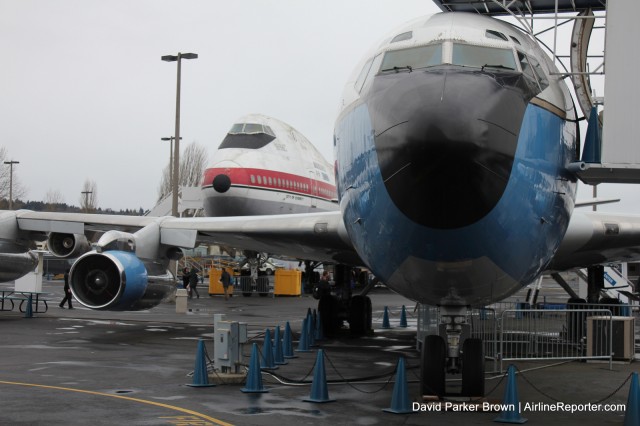 The airpark at the Museum of Flight

We all headed south to the Museum of Flight, where we would take a tour of the 737 factory and get VIP access to the first-ever Boeing 747 (City of Everett) and the facility’s Lockheed Constellation, both of which are not normally open to the public. 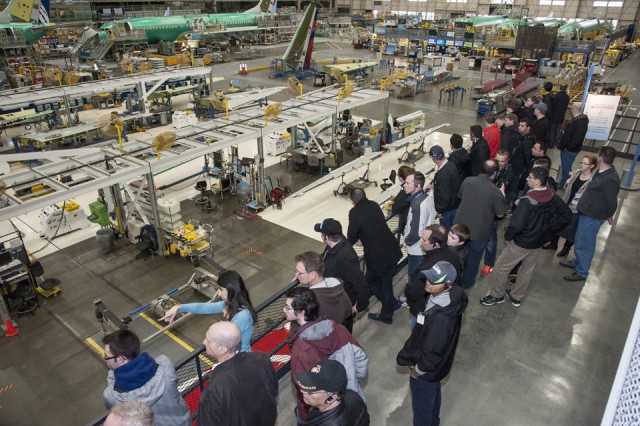 So much to see, so little time to see it. My AGF14 group inside the 737 Factory – Photo: The Boeing Company

After hanging out in the museum for a while, we were transported, by bus, to the 737 factory, which does not offer public tours. This is a huge thing for Boeing to let us participate in, and what a treat! 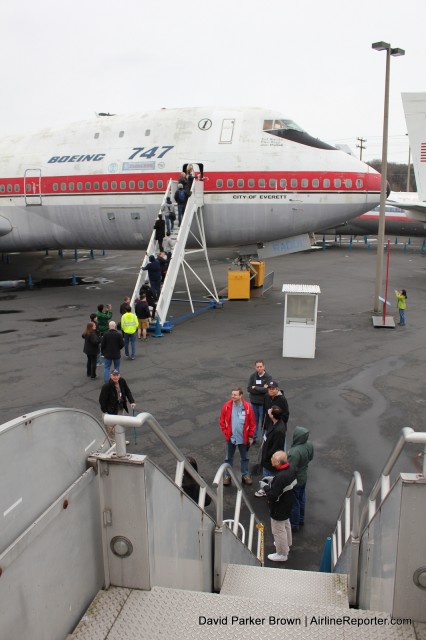 Boarding the Contellation, I take this photo of AvGeeks boarding the first 747.

When we got back to the Museum of Flight, we were a bit frightened since the weather had gotten pretty bad with some high winds. There was a chance that we wouldn’t be able to go into the first 747 or the Lockheed Constellation, and I almost started crying. 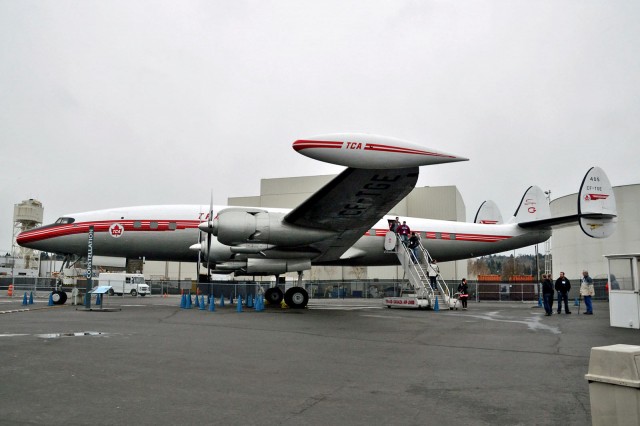 Touring the inside of the Lockheed Constellation. I am outside chatting it up. Photo: King Hui

Luckily for us, the weather held out and we had lines of AvGeeks at both aircraft just drooling to get on. My grandfather flew Constellations (for Eastern) and I was happy to be on one since I never had before. Not to get a chance to fly on one… maybe someday. 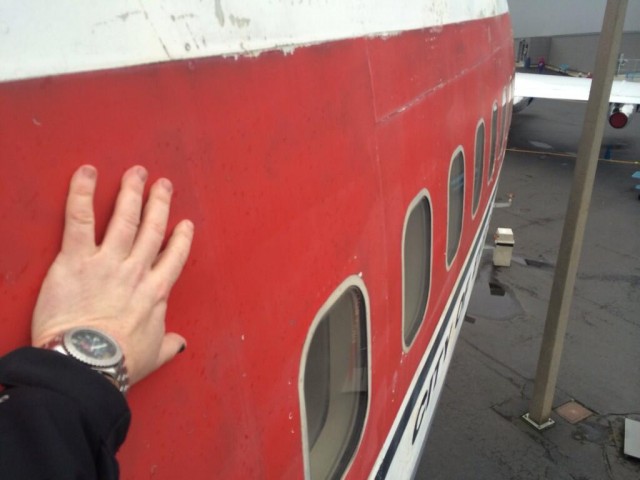 I couldn’t help but to touch the outside of the first-ever Boeing 747 before going in (and taking this iPhone photo). And no, I didn’t paint my finger nail, recently smashed it – ouch. Photo: David Parker Brown | AirlineRepoter

Although everything during Aviation Geek Fest was amazing, I was most looking forward to getting on the first 747. I had never been on it; what a piece of history. 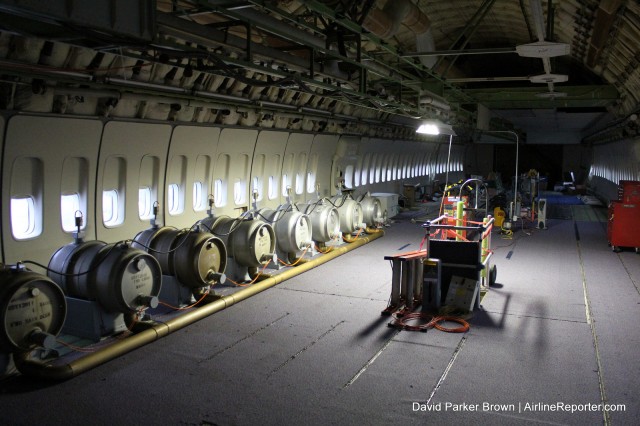 Rear portion of the main deck

My excitement ended up distracting me and I didn’t take too many photos. Thanks to King Hui for letting me use some of his awesome 747 pics. 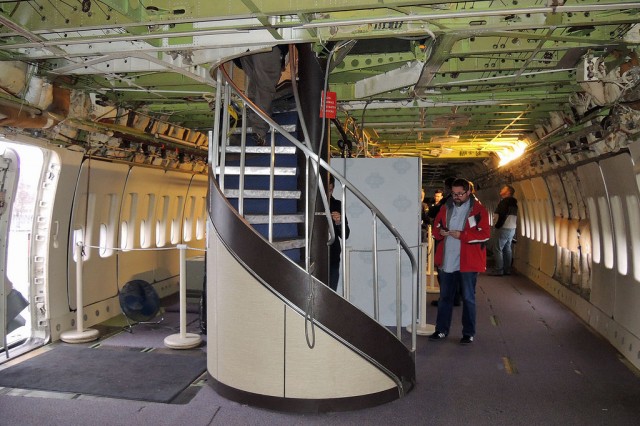 The 747 is in the middle of being restored close to what it looked like during testing. The main deck doesn’t have any seats, since it was mostly empty during testing. 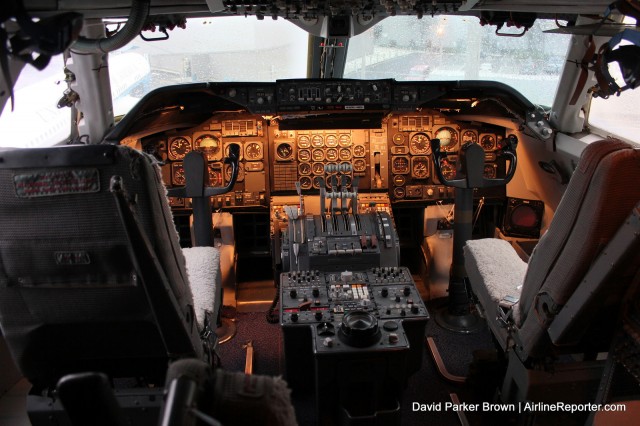 Flight deck of the first-ever 747

I loved the rawness of the aircraft, where you can still see all the support systems inside, to the aluminum outer-hull. You could literally smell the history (it was a good smell). 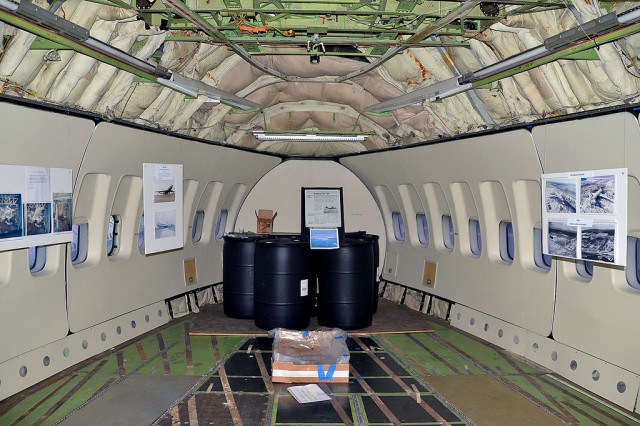 The 747 and the whole event was such a thrill, and I think the best Aviation Geek Fest that we have done to date. I was so happy to do all the fun things, but also to meet so many wonderful people, many of whom are avid readers of AirlineReporter.

We have already started talks of what the next Aviation Geek Fest might look like. If you have any feedback/ideas, please leave them in the comments here and we will consider them all (no matter how far out there). A BIG thanks to the fine folks at the Future of Flight, Boeing, and the Museum of Flight (among all the others) for making this happen!

It breaks my heart reading this… I booked my plane tix in advance, but missed out on AGF tickets. I still went to the Museum of Flight – I spent so much time underneath the 747, which was an amazing experience in itself. Boarding the Concorde was a dream come true (well sort of, as the dream also involves crossing the Atlantic in 4 hours). I am glad/jealous that everything went well. What a great time. I’m glad you are all so happy *choking back tears*

We have a small group that would love this type of tour. Would you be able to give me any information on who could arrange a VIP Tour? Thanks for your time. The photos are great!

I would like to learn more about Aviation Geek fest 2015 and possibly how to attend. Please email some details. It looks like an amazing opportunity.