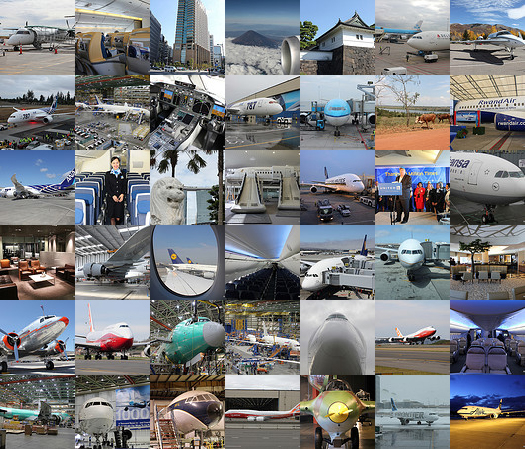 First of all, a Happy New Year to everyone. 2011 was another great year for the blog. Without your readership, airlines wouldn’t be willing to let me go on these adventures and share them with you, so I am highly appreciative for all your support.

In 2011, I was able to rack up over 81,000 miles flying for the blog (compared to 50,000 in 2010). Out of all the stories, photos and experiences which were the most popular to me and you? Well, this year it wasn’t so easy. All these “Tops” come directly from the blog at AirlineReporter.com and do not take into account of the readership on the Seattle PI or Reuters (even though are very important as well — but I just don’t have good data from those). Here are Top 5’s in different categories:

Top 5 Viewed Blogs
Rarely does time spent on a story relate directly to the amount of traffic seen. Many times, having access to a few sweet photos or a video and taking three minutes to post it will inevitably see more traffic than a story I work on for weeks. Traffic is traffic of course and it is always interesting seeing the most popular stories. These are the top viewed stories for 2011:
* Airbus A380 wing hits building at Paris Airshow
* Interior photos of ANA’s first Boeing 787 Dreamliner
* JAL livery revealed on 787 Dreamliner
* Photo of Boeing 747-8 Intercontinental outside, unpainted
* Taking a look at Delta’s Economy Comfort vs United’s Economy Plus

Top 5 Experiences
Lots of miles and many great experiences this last year, but these are my five favorite (in no particular order):
* Flying on the Boeing 787 Dreamliner for the first time
* Hitching a ride on a Beechcraft Starship
* Experiencing Singapore Airline’s A380 Business Class
* Delivering a RwandAir Boeing 737
* Watching the Boeing 747-8 Intercontinental take her first flight

Top 5 Most Commented Blogs
This year has seen many more comments on my stories and I LOVE IT. Not surprisingly there tend to be more comments on some of my more controversal topics. Here are the top commented stories (in order from most to least) of 2011:
* Received My First Body Scan and I Am Okay With It
* Airline Livery Opinion of the Week: American Airlines Livery Stinks
* PHOTOS: Airbus A380 Wing Hits Building at Paris Air Show
* CONTEST: How Many Boeing 737s Are Still Flying?
* Was United Airline’s Computer Outage That Big of a Deal? I Say Nay.

https://www.airlinereporter.com
Boeing Completed Delivery Paperwork on Third 787 Dreamliner to ANA in 2011
Why Won’t They Let Me on the Plane?!
11 Comments

Flew 8,000 miles in 2011, almost all for business on 4 airlines. I’m liking the shorter flights more than the longer ones. A hour is a good length flight with a connection for me. Love the Embraers and could do without the CRJ’s and their lower windows and seats. Loved reading airlinereporter.com and contributing in a small way. Here’s to a new and exciting 2012! Thanks for all you do David! 🙂

That Singapore skyline picture should be the #1 on that list. I didn’t have to (although I did) look at the others ones to crown that one the best.

can i ask what program/site did you use to create your flight history map? thanks