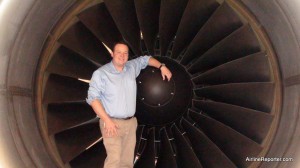 Back in May 2009 I was invited by AirTran to fly from Seattle to Baltimore to go on their special Wi-Fi media flight. This was still at a time where being an aviation blogger was new, I didn’t have a solid direction my blog was going and I had never had an experience like this previously. This event really opened my eyes to the potential of my blog. I was lucky enough to meet Benet Wilson with Aviation Weekly, Ben Mutzabaugh with USA Today, Joe Sharky aviation legend, and many others who are very inspiring writers.  The trip really started me thinking big and motivated me to aspire for bigger and original blogs.

It is awesome that my mom has written a few blogs for me.  This one was my favorite where she took a look back at what flying used to be like. She didn’t just blame the airlines for treating people like cattle, but realizes that airlines have just been meeting passenger demand for cheaper flying.  Her story got put on the front page of the Seattle PI and got quite a bit of attention (something I was a little jealous about). People have really enjoyed reading her blogs and she is working on a few more for 2010!

This one was just fun. I had just bought a car that was in Phoenix and a friend and I were flying down on Alaska Airlines to drive it back to Seattle (it was a great trip). I had just read that Alaska  started charging for checked bags, but was giving passengers a guarantee — your checked bag will be at baggage claim 25min or less after the plane reaches the gate or you get a $25 discount on a future flight or 2500 bonus miles. This was a  genius idea and I knew I wanted to cover it! It was perfect timing, since I already had booked my ticket on Alaska and I could put them to the test. I started my timer right as the plane stopped at the gate. It took us 15min 18sec to get from row 26 on the plane to baggage claim and the bag was already on the carousel. Good job Alaska Airlines! When I wrote the blog, they were planning to end the promotion at the end of the year, but since it has gone so well, they are extending it until at least July 31, 2010.

Thank you for your work and dedication with posting blogs this year. They’ve been fun to read, especially this one. It’s nice and lighthearted and shows your spirit in retrospect of how much you enjoy blogging on the airline industry. Your passion for this really comes through in your writing and I wish you lots of prosperity in your future airline endeavors!

Those were all good ones! The original content you’re coming up with is always a good read. I like the first person perspective pieces as well.

Thanks for including my article! It’s great to know that memories from the past are interesting to the younger folks!