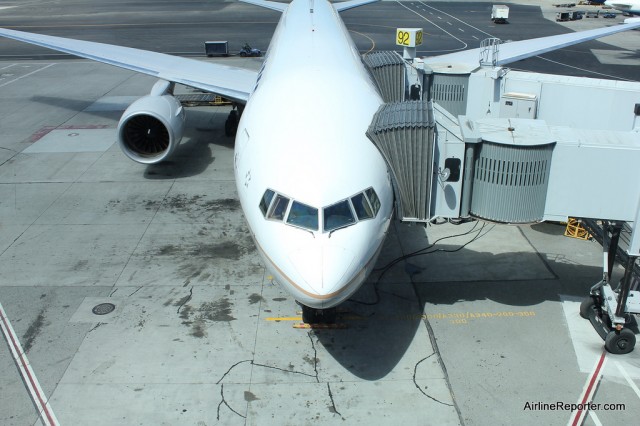 My plane is sitting right there! Why won't you let me board?!

Sometimes I like to answer questions that I receive about airlines via email. Recently I found an email in my inbox that I would probably classify as an “angry rant.” As I posted before, I get a lot of letters from angry passengers who feel they have been greatly wronged by the airline and want their story heard. Even though I do not agree that this person experienced a huge life hardship, I think there are some clarifications of his situation, that I want to share.

Long story short, this person’s original flight was cancelled. He was working with a gate agent who explained that there was a flight that he might be able to make ifÂ  he ran for it and that he did.

When he arrived at the new gate he was told that the flight was closed and he couldn’t make the plane. Then he noticed that the airplane’s door was still open and felt the gate agent should let him on the plane. I can understand that it is a hard thing to see that your plane is sitting right there, not moving and you could just easily jump on.

The gate agent explained again that he is not able to allow the passenger board his flight, which caused him to have a seven hour delay before catching the next flight (I know, I told you it was going to be horrific). Although the passenger felt that the gate agent was playing some power game with him, that is not the case.

This scenario is not uncommon and if you haven’t experienced it, chances are you might have seen a passenger yelling at a gate agent about being let on to the aircraft. Heck, even Kevin Smith (of the “I am too big to fly on Southwest” fame) had some issues with this not too long ago with Virgin America. So why won’t the mean old airline let you on your flight? There are a few reasons…

First off, running an airline is very complicated. A small delay on one flight can snowball and affect passengers, crew and airports for hours and even days.

The FAA will not allow an airline to push back their flight until everyone is seated, each bag is stowed and the cabin door is closed. Before the cabin door is secured, the gate agent must get an accurate count of the passengers and physically hand that to the pilot before returning back to the terminal. Last minute calculations on weight distribution and fuel need to be done before the plane is ready to go.

Just because the aircraft’s door is open doesn’t mean it would be easy to open the gate door and let an extra passenger on board. Remember that there are many people that are already on the plane waiting to take off on time and they need to make their connections at other airports. Why should they all be delayed waiting for the flight crew to redo their counts?

Believe me, airlines and those that work for airliens (well a HUGE majority) are not evil people. Their goal is not to make your life a living hell. They need to run their business and to do that, sometimes, some people will be inconvenienced. It can be lame, but it is just the price of living this thing we call a modernÂ  society.

https://www.airlinereporter.com
Happy New Year! A Look Back at 2011 with Top 5â€²s
A Farewell to the Airbus A340
10 Comments

About 15 years ago, I had a USAirways flight with a connection at Washington National going to Boston. The weather was poor and we got in late and waited on the ramp a while. Once we got in the terminal, I ran the whole way to the connecting flight’s gate. I watched the agent close the jet way door as I was running up. I yelled that I was on that flight and he said something like “too bad, but you are late”. I informed him that it was a late connection on his airline and he still didn’t budge. Then I informed him that there were 5-6 others who weren’t running as fast as I was and that he’d have to rebook all of us. As I was saying this, they all reached the gate. Once he saw all of us, he threw his arms into the air and opened the door! So, sometimes you can get on the flight. Something about his hassle vs. ours!! 🙂 This wasn’t even the last flight of the day, there were several others as they operated hourly to Boston then.

Most people wouldn’t care if everyone on the plane is delayed, as long as they make it…on the other hand, I don’t think that the people on the plane would mind being a couple of minutes late for a passenger making a late connection.

Once the gate/flight is closed (on the computer, not physically), its a real headache for the gate agent to open it again. Reopening the flight, then reclosing it can use up valuable time that can cause a flight to miss its take off slot or something. However, sometimes its worth the hassle if there is a big enough group that rebooking will take longer…

Flight Flybe Southampton-Paris Orly the 21th december : I couldn’t really believe it but they made the flight delayed 20 minuts because a family called saying they would be late, they managed a bus for them (4 persons) as we board on the tarmac. The pilot said “We will wait to let them spend christmas in family in Paris”. Even if Southampton is a small airport and flybe a regional carrier, I thought that indeed, airlines were all “clock making” worlds so I was pleasantly surprised.
We eventually landed on time in Paris “and everyone lived happily ever after”

Well said David, thanks for trying to educate people 🙂

I spent some over 40 years in airlines industry, and noticed there are drastic change of passenger manner. If i can lay out few example. 1. Not carry itenearly sheet but store in I pod. 2. Not not mention which flight they are taking because it stored in I pod. 3.No reply of greeting from passengers because most of time either they on the phone or looking at text message.
They show up at airport like that are tasking public bus and think getting at ant time. Knowing airport congestion, TSA lines and other factors. And they expect to airlines to do something right away. Don’t forget human can do so much with lot of preparation. Its easy to blame airline and upload in you tube or blog broadcasting to public. Public do not realize what takes to operate airplane. Its not just drive a bus. glory of airline business is long gone. Who damaged airline business? government and public.
American public must learn manner when traveling on public transportation.

The author’s explanation reminds me of the rancher’s daughter . . . all the horsemen knew her. The industry has become much to full of itself in my opinion. I, too, worked for major airlines albeit during the regulated era. I remember many an occasion where the ticket agent at the counter called up to the gate to let the agent know to expect a late check-in and the agent, or rather the agent’s supervisor, would hold the flight open. On one occasion myself, I caught the last Piedmont Airlines flight of the day from Roanoke to Bluefield off a late arriving connection from Atlanta, the flight having been held just for me. The door was closed behind me and the number two prop was turning even before my seat belt was fastened. And finally, I recall very well at age eight in 1959, boarding a Northwest Airlines DC-7C at Portland, OR for a flight to Chicago’s Midway Airport. The boarding stairs had been pulled away and all four of the mighty R3350s were turning when suddenly engines 1 and 2 were turned off. The boarding steps were run out again to the plane and a last minute passenger was permitted to board. The pilot restarted engines 1 and 2 and the plane departed. It was called service in those days. Something the airlines of today seem to have forgotten. Back then, incurring a ramp delay due to a jammed baggage door or damaged luggage or freight falling off a conveyor would most surely bring on a stiff rebuke or a string of obscenities from the ramp supervisor, but taking a delay on behalf of a passenger was treated more or less as business as usual.

Um, everything was calculated based on tickets, plane was already fueled before gate was shut based on ticket numbers and average baggage weight per traveler. Nice try!

I’m writing this 20 minutes after witnessing a grown man throw a strop at SFO over his missed flight. Bottom line for late arrivals: Don’t.

Factor in possible traffic jams, plus all the time in check-in/TSA purgatory, realize you’re not the center of the Universe and you’ll be fine.

Miss the flight and you’ll get a hard lesson in reality: the airline and majority of passengers (who manage to board the flight in time and some of whom might have an even more desperate need to do so than you) , are not your nannies.

What about arriving 20 minutes prior and not being allowed to board.