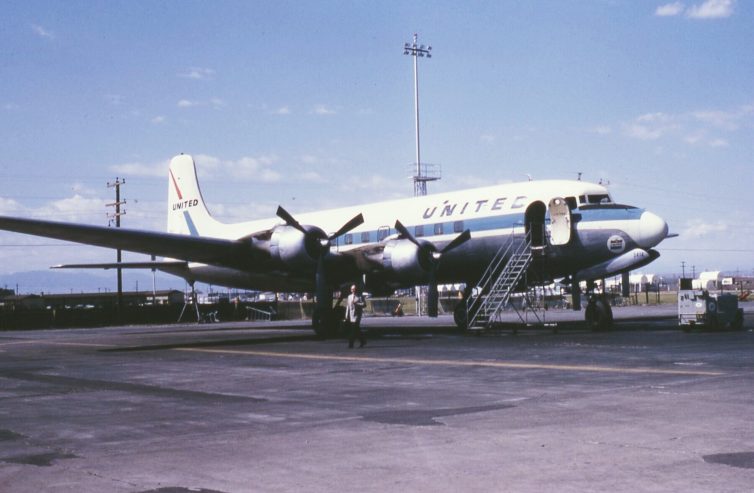 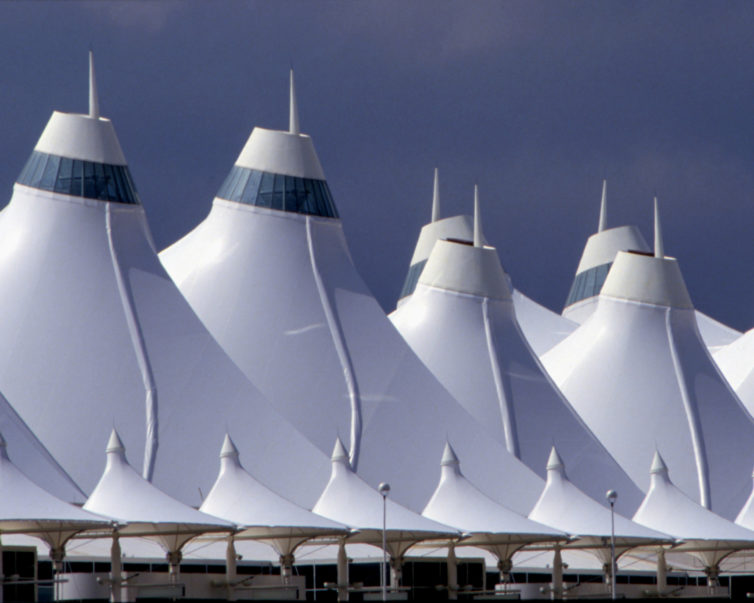 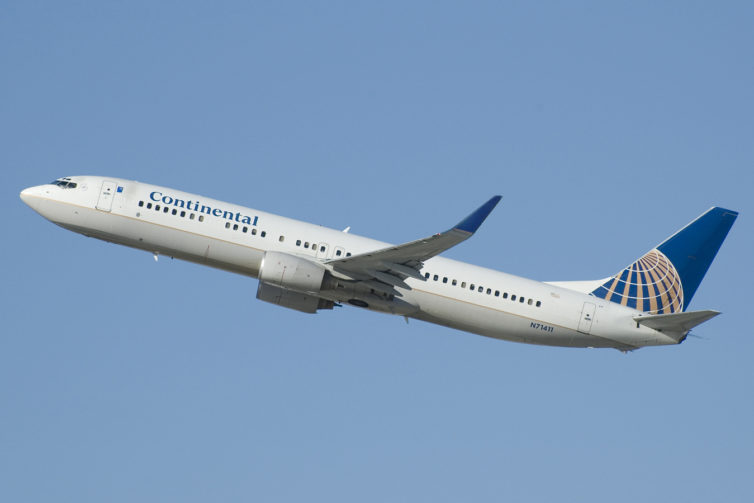 Denver is one of United’s three continental-focused hubs, geographically speaking, along with Houston George Bush Intercontinental (IAH) and Chicago O’Hare (ORD). These hubs, centrally located instead of near the U.S. East Coast or West Coast, are efficiently positioned to connect passengers traveling domestically through the United States and North America. Many of these connections between Denver and the other hubs are flown daily on large, wide-body aircraft including the 777-200, 787-8, and 787-9.

United’s hubs in the Continental U.S. Denver is centrally located to flow traffic hub-to-hub without venturing far out of the way. Image: GCmap.com / Kevin Horn

Both Chicago and Houston have large international and intercontinental route networks that feed from their domestic connections. Chicago is heavily focused on Europe (nine cities) and Asia (four cities), while Houston is United’s gateway to Latin America and also serves destinations in Europe (four cities) and a lone flight to Asia (Tokyo). United also recently ultra-long-haul service from Houston to Sydney.

Denver, on the other hand has a much more limited international route network for United, and truly has been a domestic focused hub for both origin and destination passenger traffic (O&D), as well as connecting passengers to and from the western U.S. with the rest of the United network. 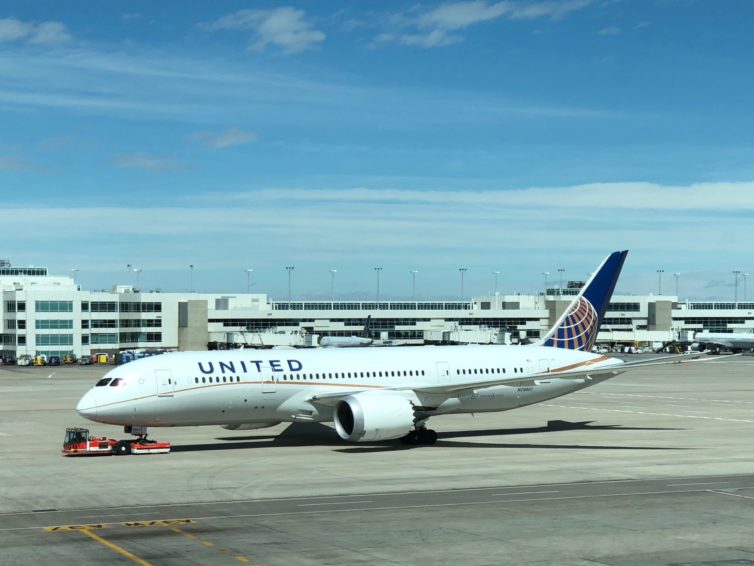 Dropped off international arrivals from NRT and headed to pick up more – Photo: Kevin Horn

Currently, Denver serves international destinations in Canada and Latin America, with a single daily flight to Tokyo (NRT) since 2013 and new service to London (more on that later). While not international, it is important to mention the routes to Alaska and Hawaii since they are much longer than other U.S. domestic routes are are served by larger aircraft including the 757-200 and 777-200 in international or United p.s. transcon configurations (seats only, not service).

United has been focusing on improving connecting options and feeding traffic to Hawaii and now offers year-round daily service to Honolulu (HNL), Kona (KOA), Maui (OGG), and Lihue (LIH). These flights are operated by a mix of aircraft including 757-200 and 777-200 domestic with up to 366 seats, including a dense, 8-across lie-flat business offering in the forward cabin on the 777.

United’s International and Intercontinental routes from Denver including Alaska and Hawaii. Note that the MUC, FRA, and PTY are codeshares operated by Lufthansa and Copa. Image: GCmap.com / Kevin Horn

United has close partnerships with Copa, Lufthansa, and Air Canada in Denver as members of the Star Alliance. Passengers can book daily United codeshare flights to Panama City (PTY) with Copa, and Frankfurt (FRA) and Munich (MUC) on Lufthansa. While these flights are not considered parts of United’s core operations, they do provide key connections to passengers in the western U.S. and are bookable directly with United including connections to destinations beyond the partners’ international hubs.

Domestic is big business in Denver. Sitting on a 737 with an A319 in the foreground. – Photo: Kevin Horn

The U.S. domestic network that Denver serves is unique because of its location. Denver is ideally located to conveniently connect large portions of the United States. And operationally, because of Denver’s large footprint, excellent sunshine, and multiple parallel runways, impacts due to ATC restriction and weather are rare.

As of March 2018, United is serving 471 daily flights to a total of 145 destinations, including 133 U.S. domestic locations. Recent expansions have pushed service east including smaller east coast markets like Hartford, CT (BDL) and Norfolk, VA (ORF) to alleviate traffic in the northeast at hubs like Newark and Dulles.

With so much connectivity, Denver stands as United’s most profitable hub. This is impressive since Denver is the fourth-largest airport in terms of traffic across the network. With profitability, operational efficiency, and low passenger duties (fees paid by the airlines to an airport for use of the terminal and facilities), United has made it a priority to expand the number of daily flights, destinations, connections, and passengers moving through Denver.

An E175W at the gate in Denver. United has a large regional operation there but more mainline flights overall. -Photo: Kevin Horn

United occupies all 73 gates in Denver’s Terminal B and also conducts some operations in Terminal A, including international arrivals. Announced by the airport as part of a large modernization project was the proposed addition of 11 additional gates for United at Terminal B, bringing the total to 84 preferred use gates by 2023. 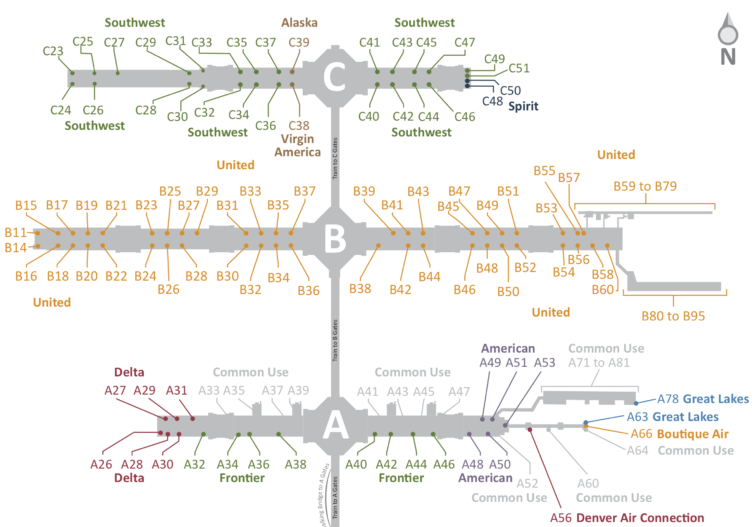 The gates at Denver. Notice United’s exclusive use of Terminal B. – Diagram: Denver International Airport

United operates a full range of aircraft from Denver included regularly scheduled domestic service with the 777-200 to hubs and Hawaii, all the way down to 50-seat E135 aircraft on regional routes. Nearly all of the types in the United and United Express fleet can be spotted on the tarmac, with the exception of the 767 type, with no scheduled service currently listed.

A common sight in Denver are United’s 787 Dreamliners, which have consistently operated from Denver since the type was acquired in 2012. United was a launch customer for the 787 and one of earliest routes was between Houston and Denver as operational experience was gained on the aircraft from its original Houston base.

United has moved the headquarters of 787 technical operations to Denver and is equipped to perform engine service and changes on site as well as aircraft maintenance and service. Denver serves as a 787 crew base, so considering these factors along with the economics of the aircraft, it’s no surprise that the 787 is the type chosen for long-haul international operations from Denver.

Despite Denver’s high field elevation of 5,430 feet MSL, performance penalties are limited due to the long runways and mild weather, even during the summertime. The longest runway, 16R/34L measures 16,000 feet with the rest of the runways at 12,000 feet. Even fully-loaded 777 and 787 aircraft heading on long-haul missions can perform from the long runways.

It was mentioned earlier that United is the single largest passenger carrier in Denver. In fact, United Airlines and its affiliates operating as United Express carried a total of 25.9 million passengers in 2017. This represents a total market share of 42.2% in Denver for passenger traffic. Percentage wise, the share of traffic is up slightly over 2016; however, overall growth is strong and up 5.6% or 1.44 million passengers. To put this in perspective, United’s passenger growth in Denver in 2017 was greater than the total number of Denver passengers serviced by Alaska, Allegiant, JetBlue, and Virgin America, combined!

Freight is another important metric that can make a big difference in the bottom line. An airline that can sell excess capacity in the cargo hold is a more profitable airline, and United takes advantage of the size of its operation to move lots of it. United had the third-largest cargo operation in Denver with 13.1% of market share and a total of 7.3 million pounds, behind only the two largest dedicated freight airlines in the world: Fedex and UPS. 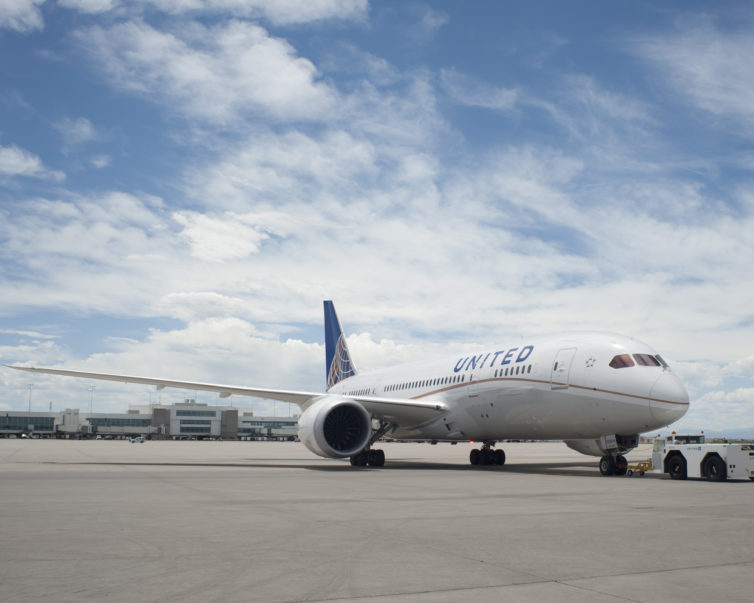 The long-haul aircraft of choice for Denver: the 787-8 – Photo: United Airlines

With this much momentum, United is growing fast and aggressively at Denver. The quality and size of the operation make Denver International Airport United’s most profitable hub. It’s no wonder that senior leaders have announced their intention to grow United’s operation at Denver and it is poised to surpass both Houston and Newark in passenger traffic within one to two years.

All of this is good news for United’s 7,000+ employees in the Denver area as well as the state of Colorado and surrounding areas. The economic benefit that is delivered to the region is enormous and has been instrumental in the sustained growth of the Denver area over the last 20 years.

The best and most exciting way to grow is through the launch of international flights. And United’s new, non-stop Dreamliner service to London is the first high-profile move to expand (and put pressure on Norwegian, which recently started serving Denver from London and Paris with its Dreamliners). Part two of this article will document this flight including all of the celebrations surrounding the inaugural of UA27, Denver to London Heathrow.

Kevin is an Aeronautical Engineer with a passion for all things flight. Currently living in Denver, he loves to travel for work and fun and is often flying to destinations to pursue his hobbies of Running, Skydiving, Indoor Skydiving, and Adventure.

Spotting Tool Review: JetTip Watches for the Good Stuff So You Don’t Have To
Dreamliners Going the Distance: New Ultra-Long-Haul Routes For Boeing’s 787
4 Comments

Loved this story! Great insight into United’s business model. Still won’t fly them if I have a choice though

Any chance for a current report on DEN ops with COVID (hopefully) tapering down and supersonic flight on the horizon?