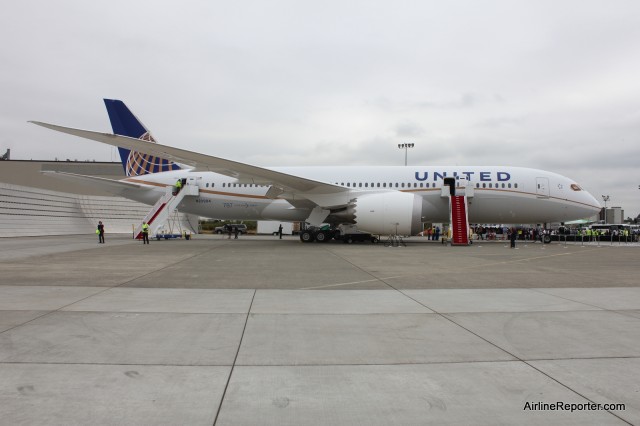 Yesterday was a beautiful day at Paine Field to take a look at United Airline’s first Boeing 787 Dreamliner. This was not a delivery ceremony, but a celebration that the aircraft (reg N20904) is out of the paint booth and one step closer to being delivered.

United is expecting to take delivery of their 787 sometime in September. The terminology used yesterday makes me think the plane might be delivered closer to theÂ beginningÂ of the month than the end — we shall see. 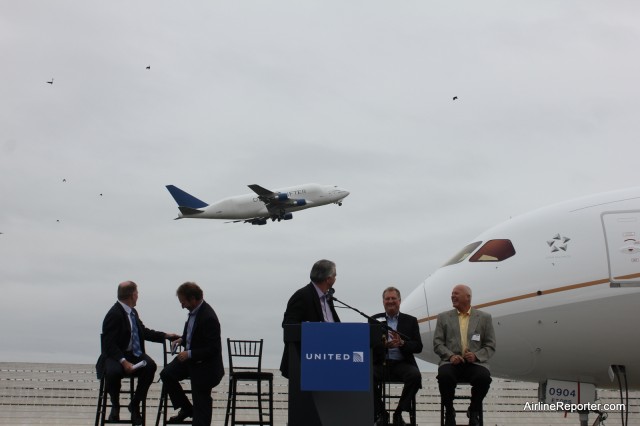 That darn Dreamlifter ruined our day (okay, it actually quite enhanced it).

I arrived to Paine Field at about 9am to check in. All the media had their equipment quickly sniffed by a Boeing security dog (one of the best parts of the event) and we took a short bus ride to the compass rose, where the airplane was waiting.

There was a tent set up where United employees, VIP mileage members, invited guests and media waited. Before the event officially started, the media was able to take photos of the Dreamliner. It was difficult to sit down to listen to the speeches — I was itching to get on board. 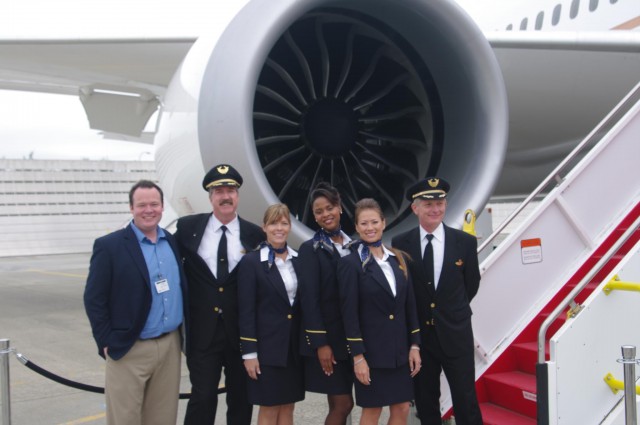 Hanging out with some United flight crew before boarding the 787.

During the speeches, United had some good things to say. David Hilfman, United Airlines senior VP of sales stated, “We have been awaiting this day for a while. And it has been worth every bit of the wait.” It is obvious that the airline is very excited about their new aircraft.

In the middle of the speeches, everyone was in awe, when a Boeing Dreamlifter took off in the background, to a cheering crowd. 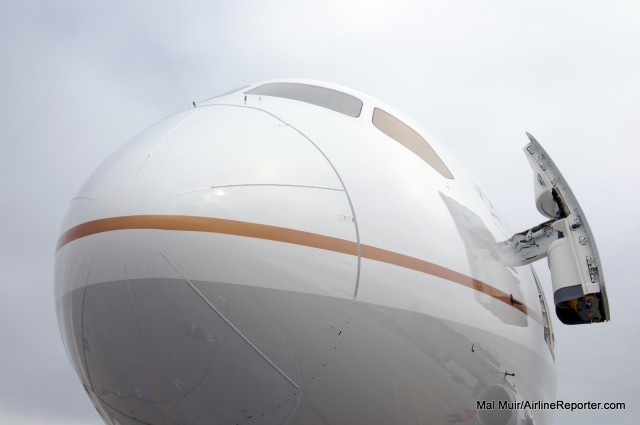 This aircraft nose she is beautiful!

Soon, it was time to board. I have been lucky enough to get on JAL’s 787, Qatar’s and a few of ANA’s Dreamliners previously which puts me in a pretty good position to compare United’s interior versus the others. 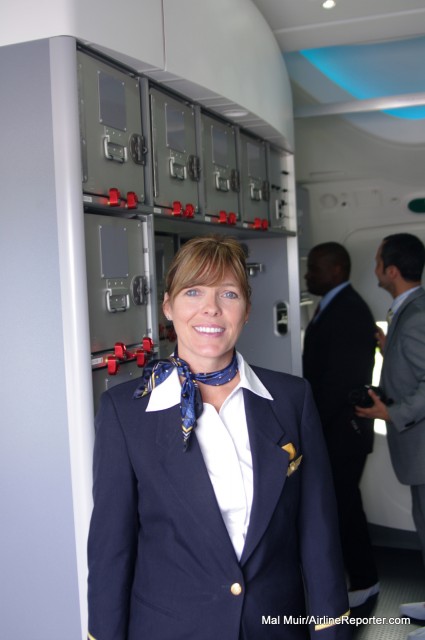 Welcome on board — wait… where is the dramatic entry way?

My first surprise was the entry way. One of the things touted by Boeing about the Dreamliner is the ability to have a dramatic bar entry way (example of JAL’s). When boarding in the second set of doors on the United 787, you are greeted by one of the galleys, not an impressive entry way.

It isn’t bad and most passengers probably won’t notice, but it was a bit of a surprise. I talked to one of United’s VPs of Marketing and he explained the choice provides more space in the cabin. Read: probably a bean-counter’s decision to add more seats. It could be a smart move, since it is not clear yet how much these open bar areas will be used by passengers during flight on other airline’s Dreamliners. 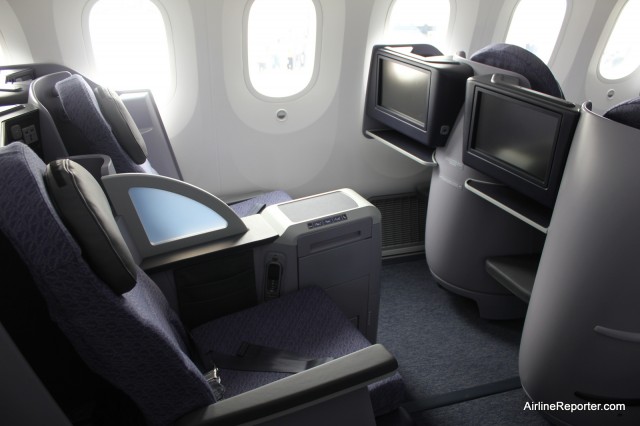 After entering, I headed to check out the Business First product. There are 36 of the seats configured in a 2-2-2 layout. The product looked clean and for the few minutes I sat in the seat, it was comfortable. The non-shared armrest in each seat is able to be lowered, providing a nice addition of width when sitting or sleeping. 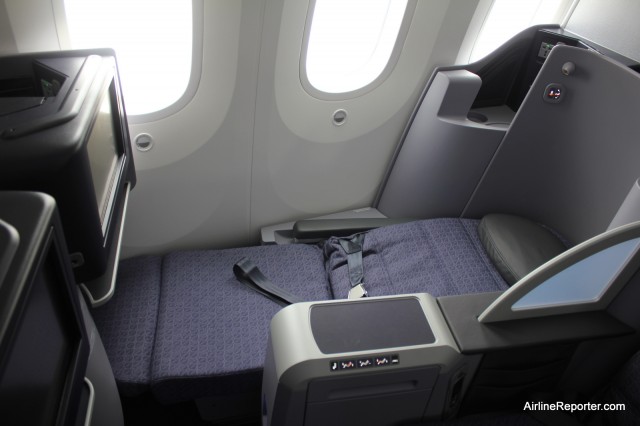 There is plenty of storage space and with 68″ of seat pitch, even the tallest passengers can get comfortable. The only down side that I could see is that the center divider between seats cannot be lowered. It is small enough to still be able to talk to the person next to you, but not large enough to give you a level of privacy that competing products have. 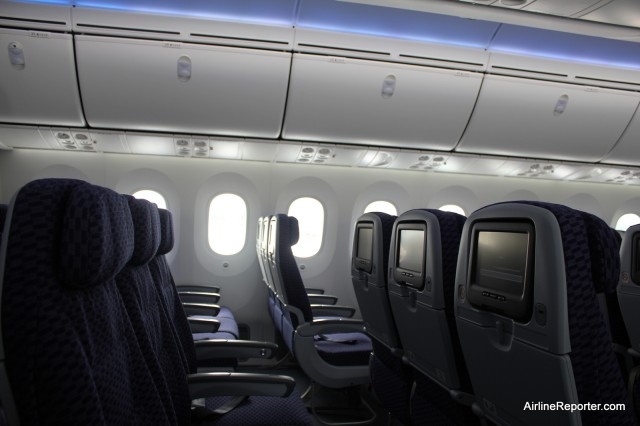 United has their Economy set up in a 3-3-3 format.

Going farther back in the 787, you first come across 72 seats in Premium Economy and another 111 seats in Economy. United has decided to configure their Dreamliner in a 3-3-3 layout. The seats were comfortable, for the few minutes I sat in them, but not sure how a ten hour flight would go. Each seat on the plane has its own in-flight entertainment, which will offer a distraction for passengers not able to sit in a premium seat. 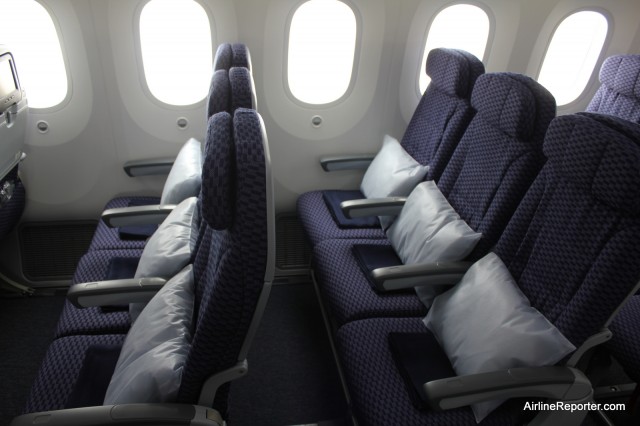 What are those? Yes, pillows and blankets on the Economy Plus seats.

As with all 787 Dreamliners, United’s has the LED lighting, dimming windows, lower pressurized cabin and improved economics. 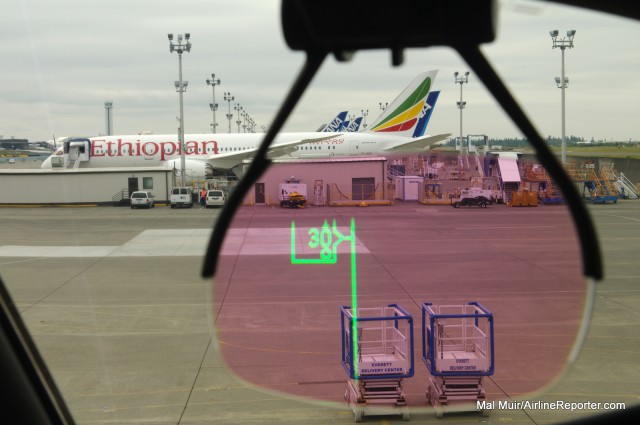 A tour of a 787 Dreamliner would not be complete with out a visit up to the flight deck. Between airlines, there is almost no different of the flight decks.Â  I have been told that really the only main difference is a screen view from airlines that use the Rolls Royce Trent 1000 versus the GEnx engine. 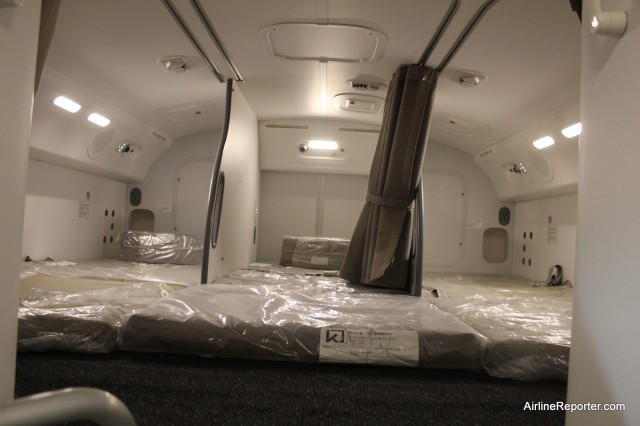 The crew rest area in the upper rear of the 787.

One part of the 787 Dreamliner I have not been able to check out yet was the rear crew rest area, which is located above the main cabin. I would have to say that it gets the job done, but surely is not super roomy. 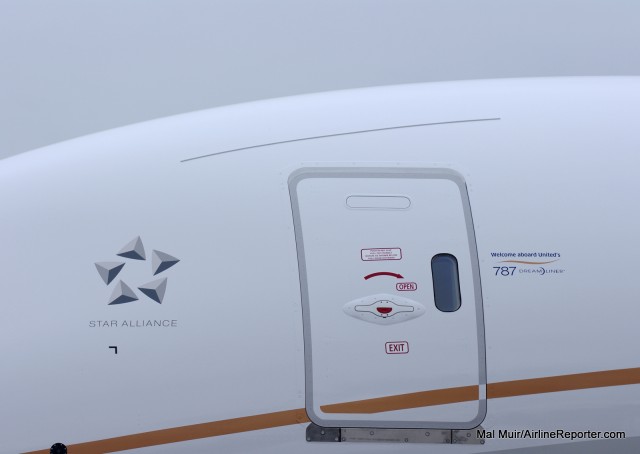 A sign on the left side of the plane lets you know you are boarding a 787.

There is no question for me that United’s 787 is a nice product. However, it is far from revolutionary. Still, I don’t think this is United’s fault. My guess is the carrier wanted to premiere their new Business First product on the 787, but due to the delays, they have already installed the product on 777s and 767s. Heck, even the 767s are getting a better in-flight entertainment system than the first 787s will have.

Currently, the only route that United has announced for their 50 Dreamliners has been Denver to Tokyo. The first commercial flight for United will be sometime in October.

A special thanks to Mal Muir for helping me at the event.

MORE STUFF TO CHECK OUT:
* Even more photos on my Flickr page
* Epic video from United withÂ Rhapsody in Blue
* Video of the 787 Dreamliner coming out of the paint hangar

https://www.airlinereporter.com
PHOTOS: The Wonderful Liveries of the Boeing 787 Dreamliner
Airline Livery of the Week: VivaColombia and the Color Circles
21 Comments

Wow! It has LED lighting!

Great writeup as always DPB! One of these days I’ll find my way onto a 787!

Does the back lav have a window in it like on the ANA planes?

Good report David! I agree this lacks some of the flair that most would expect of the United 787 flagship, however, I would be delighted to fly on it anyway. The livery was the biggest point of deflation for me considering the hype and I’m glad you didn’t set your alarm for 3:30 am as some of us did when it came out of the paint hangar…aka me! All said, it’s still a Dreamliner and regardless of the reduced flamboyency I still think it’s an outstanding plane. Great photo’s; especially the nose. Keep up the great reporting!

This is probably the worst of the interiors I have seen. Boring, and uncomrtable are the only thoughts that come to mind. Given a choice of JAL, ANA or United, which would you choose to fly across the Pacific? Nobody in their right mind would pay for business on UAL. Mr. Smisek – once again you have left the CO faithful down.

“Mr. Smisek â€“ once again you have left the CO faithful down.”?? This is PM CO interior.

Apparently United wanted to update it to reflect their new IFE and such, but Boeing wouldn’t let them to prevent further delays.

John D @5:51 pm, I agree. I thought the interior is, Yawn. Thanks United for reminding me, there are much better choices when I choose to fly on other airlines compared to flying on United.

I know the desire to fight it, but they are all United flight crews now 🙂

Tell that to their uniforms and contracts. Stop regurgitating the the UA desk bound management talking points and talk to the on the line pilots,FAs,rampies mechanics etc. Perhaps you wouldn’t want to risk your free rides? I know the desire to fight it, but they are NOT all United flight crews now. I can’t fly CO equipment and vice versa.

True, there are technicalities, but this is part of the transition. No question it is sad and difficult to watch CO go away and internally there are still going to be many different issues. However, from the outside, most passengers aren’t going to know what a CO route, aircraft or flight crew are, they are only going to see United.

While the United name survived the PM behind the scenes United didn’t. Training,manuals,policies,pass travel the most significant day to day operation of PM UA is now PM CO. So majority of PM CO lives on with a new name…and old livery. Ironic that had CO agreed to UA 1st merge talks while Pres.Bush was in office the merged airline would be CO headquartered in HOU.

Not sure what Bush/HOU has to do with anything.

Yes you can always tell the difference of the equipment 757-200 for example CO had newer planes with individuaul video on demand…the UA 757-200 is a relic with CRT’s hanging from the ceiling… As for the Dreamliner I was scheduled to fly the 787 on two segments, planned it that way on purpose (Nov 21st and 22nd) SFO-IAH-EWR found out today (swapped out)the metal on those flights to 767-400’s what a disappointment…