It’s not often that we here at AirlineReporter review hotels. In fact, a property must be exceedingly special to attract our attention. Take, for example, prime PlaneSpotting properties like the AvGeek favorite Renaissance Concourse Hotel in Atlanta, or equally impressive Fairmont Vancouver Airport. And of course, who could forget the world’s only seven-star hotel, in Dubai.

But what about a lowly three-star former Holiday Inn Express turned independent hotel in Kansas City? What could they possibly offer of interest to a fiercely loyal major brand status holder and admitted hotel snob like me? A lot, it turns out. KC’s 816 Hotel (that’s our telephone area code for those not in the know) has done a lot to distinguish itself from the pack in appealing to folks from all walks of life. The property has over one hundred rooms, with twenty themed rooms. These unique rooms range from representing our various sports teams to our local newspapers to themes far off the beaten path: KC Mob or BBQ room, anyone? And while any of these might appeal to the general population, the gems that caught my eye were those dedicated to the Roasterie DC-3 and TWA.

I was lucky to score a night in the ever popular TWA room. Here are my thoughts’¦ 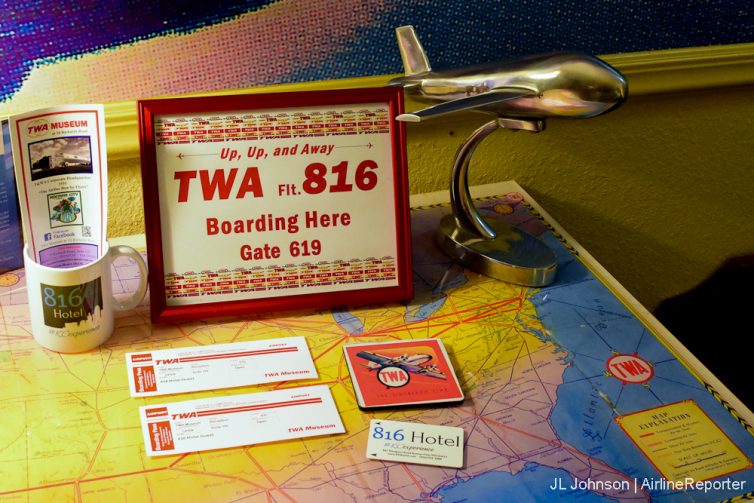 Over the top attention to TWA goodness. Plus two tickets to the TWA Museum!

The 816 Hotel is in an area of KC we locals refer to as Westport. Westport isn’t a tourist trap area, although that’s a five-minute drive away for those interested. Instead, this is where the locals hang out for great food and nightlife. I arrived on a Friday night when the area was brimming with food trucks, live music, and the typical excitement one might expect in a lively downtown. I was concerned parking would be an issue. Not only was it not an issue; they even had electric vehicle charging stations. Nice perk for this EV driver!

At check-in, the agent noted that the TWA room came with the “TWA welcome package” which caught me off guard. It turns out that those who book the TWA room are given two complimentary tickets to the TWA Museum (the room’s sponsor), a dual-themed TWA / 816 hotel coffee cup, and a TWA coaster. I’m a sucker for AvGeek tchotchkes, so all were perks for me. 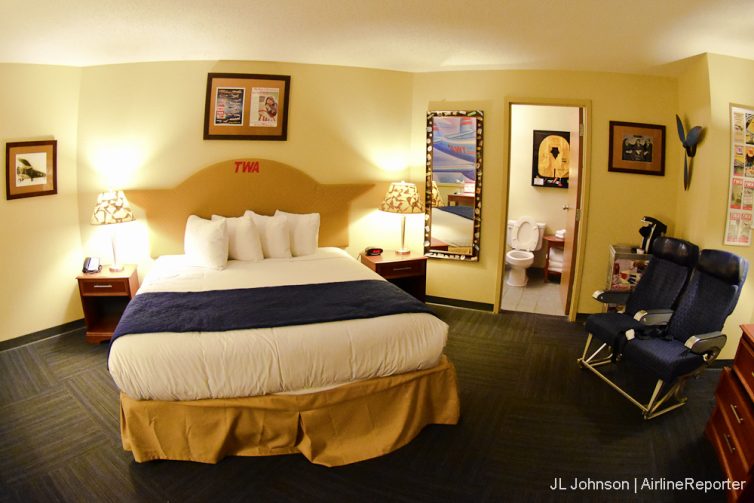 The TWA room is on the sixth floor of the hotel, just past some historical murals depicting iconic KC venues and events of note relating to our fair city. The first thing one will notice upon entering is the large TWA Lockheed Constellation photo to the right, followed by a desk topped with a TWA route map holding the arrival gifts noted above. The room is packed with TWA memorabilia and comes complete with a galley cart and a pair of airline seats. Yes, of course, I sat in them. 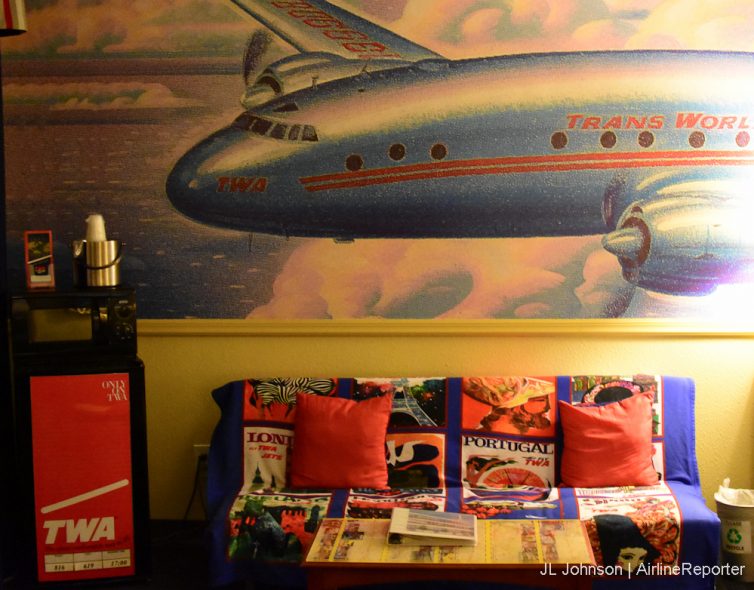 The room’s refrigerator sports an “Only on TWA” sign and the sofa has a cover illustrating some of TWAs famed advertisement art. One item of particular interest sits atop the coffee table – a notebook detailing TWA’s history in the context of Kansas City. Here’s a lesser-known fact: TWA spent most of its early life headquartered right here in KC. While the airline may have flown off into the sunset, it is still very much an iconic brand here. 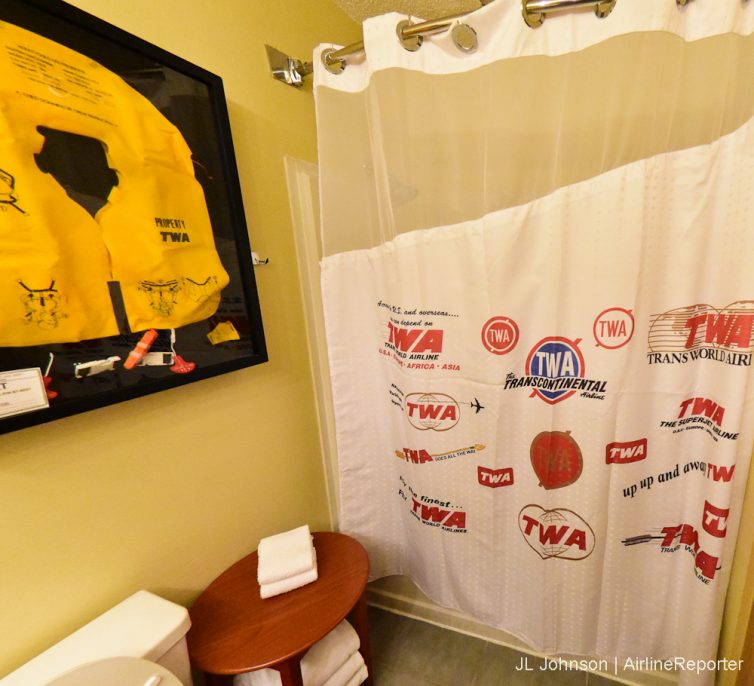 The TWA theme carries into the bathroom as well

The TWA theme carries into the washroom as well where patrons will find a shower curtain sporting many of the logos TWA flew under during its 76 years of operation. The washroom also sports an only-slightly-expired TWA branded inflatable life jacket as well as a first aid kit repurposed to hold various toiletries. 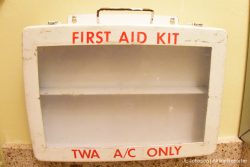 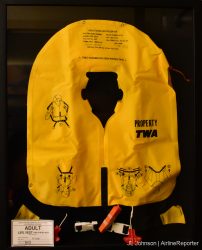 It had been a long day, and I was anxious to get to bed. A hotel is only as good as its beds, so this would be the real test. I’m pleased to report that the bed was on par with what I would expect at a four- or five-star property, except despite having spent nearly two years of my life sleeping in hotel beds, this was the first with a TWA embroidered headboard. 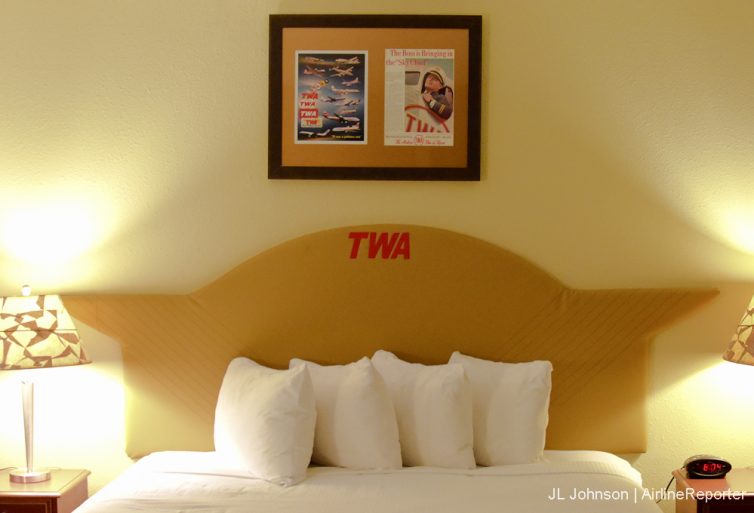 At the end of the day, a hotel is only as good as its beds. Although a TWA headboard sure helps!

Complimentary breakfast the next morning was what I would call “Continental plus.” The common cold options plus pancakes and omelets made to order. I was pleased to find that the 816 Hotel has its own signature coffee as well. The 816 Hotel blend comes from their partner and AvGeek favorite The Roasterie, a specialty roaster with a passion for the DC-3.

The TWA room at the 816 Hotel was everything I expected it to be and more.

Over the years I think I have made a compelling case for AvGeeks to add Kansas City to their to-do list. For those looking to overnight, I can think of no better option than the 816 Hotel for an immersive dose of KC history and culture. Bonus points to those who manage to book the TWA room or one of its 19 themed peers. Individual rooms can be booked ahead of time by contacting the hotel directly via phone. Costs vary but expect a night in a themed room at the 816 Hotel to run somewhere in the neighborhood of $150. In the case of the TWA room, note that the two complimentary TWA Museum tickets are worth $14.

Disclosure: My one-night stay was complimentary, the result of a social media contest I won unrelated to AirlineReporter. My opinions are always my own.

The End of the Tupolev Tu-154 in Continental Europe
PHOTOS: Xiamen Airlines Kicks Off Service to the U.S.
9 Comments

Thank you for the great review! The room was decorated by volunteers and board members at the TWA Museum! Was a real trip down memory lane getting that room to look that way! Big kuddos to Pam Blaschum and Karen Young for the experience!

Thanks for your efforts, Dianne. The passion really shows in the work.

You said washroom! This local Canadian is curious where you are from?

Born and (mostly) raised in the US Midwest. Considering our high percentage of non-US readership, I try to use more “global” verbiage when the decidedly “American” version is less polished. Cheers!

What a neat idea. I want to stay there and see everything. I’m a former TWA flight attendant.

C’mon out! Lots to see and do, TWA and otherwise.

Very cool! Thanks for the review. It’s always nice to see AirlineReporter expand beyond the usual offerings. I love the flight reviews, and this was fun too. I’d definitely stay there if I visit Kansas City again.

Thanks for the review,,,,TWA airline of choice for this Ohio boy!!