I’m an #AvGeek. I love specialty coffee, classic airplanes, and my hometown of Kansas City. Let’s combine them all! Here at AirlineReporter we are a fan of all things aviation, including those on the fringe. Say for example, King Nut, the snack provider to the world’s airlines, or a brewery with beer lines which cater to AvGeeks. Today we’re taking a look at The Roasterie, a specialty coffee company that is obsessed with the iconic Douglas DC-3.

How much do you love airplanes? Enough to dedicate the branding of your company to one of the most recognizable planes in history? Ok, that’s easy enough. But do you love DC-3s enough to have one restored and mounted to the roof of your downtown Kansas City coffee roasting plant? This, my friends, is the apex of AvGeek achievements, a level unlocked in 2012 by The Roasterie founder and president, Danny O’Neill.

The Roasterie has long been an iconic KC brand, but when they mounted a DC-3 to their building, they changed the skyline and commanded attention from anyone even remotely interested in airplanes. It’s hard to drive on I-35 through KC and not notice this plane that looks as if it has just reached V-1 and is rotating out of downtown. I have long been a fan of The Roasterie and always intended to visit for one of their free tours, but as locals tend to do, I kept putting it off. What better way to remind folks of their intent to visit than to mount a piece of AvGeek eye candy to your roof? It was time to dig a bit deeper, and I have to be honest, I’m glad I did… 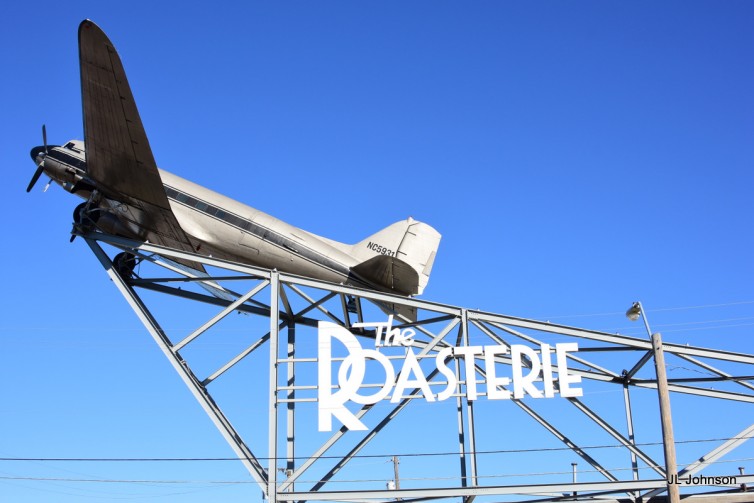 I arrived at The Roasterie on a bright Sunday morning with calm winds and no clouds. I couldn’t help but think the day would have been perfect for flying, if only the company’s DC-3 could fire up its engines one more time. 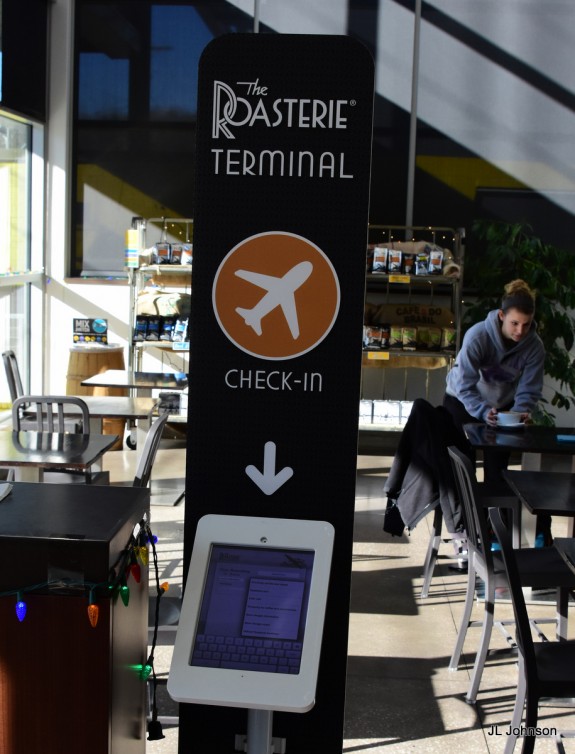 Check-in was easy and airport-themed. After finding my reservation, the kiosk printed off a DC-3 themed name tag. The tour waiting area happens to be a cafe similar to what one might expect from a certain coffee conglomerate, only with personality and way more AvGeek goodness. No one in my party lasted more than a few minutes in the incredible aroma of the best coffee in the world. We all quickly caved and picked up a drink from the friendly baristas working the counter. The idea behind free tours is a smart one. There’s no way you’re leaving without making a purchase.

Right on time, a tour guide came around and ushered our group into an event space off the side of the cafe which they affectionately refer to as “The Bean Hangar.” Our guide introduced himself as Gague, but then asked that we refer to him by his “bean name:” WolverBean. I immediately knew this wasn’t going to be a run-of-the-mill, boring tour. And The Roasterie wasn’t a typical company. Like so many of the brands we most love, they have a fun-LUVing and playful attitude. It turns out all of The Roasterie’s employees have “bean names.” The name for Danny O’Neill, the founder? Bean Baron, of course! 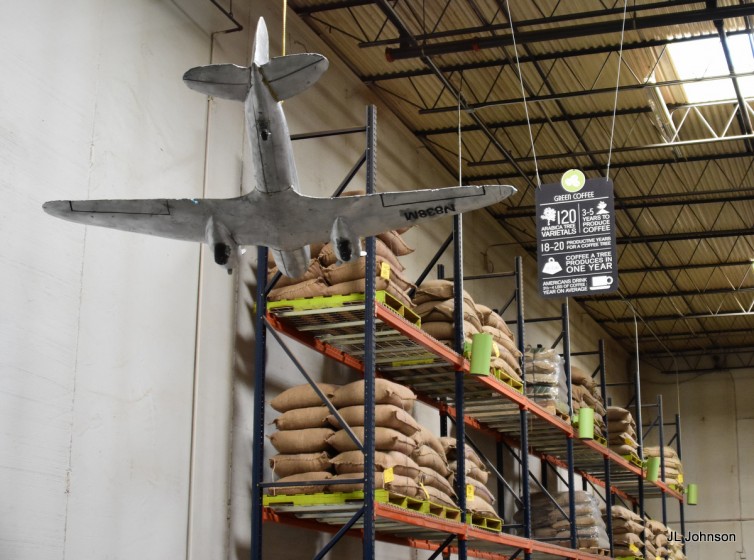 Prior to the actual factory tour, participants sit through about 10 minutes of short movies covering the history of The Roasterie, and coffee in general. The clips are well produced and informative. Did you know coffee is the second most valuable traded commodity in the world? The first is oil, for anyone curious. Also of note, specialty coffee, also known as gourmet coffee, comes from only the top 15% best beans. The Roasterie buys only the top 2% quality beans. 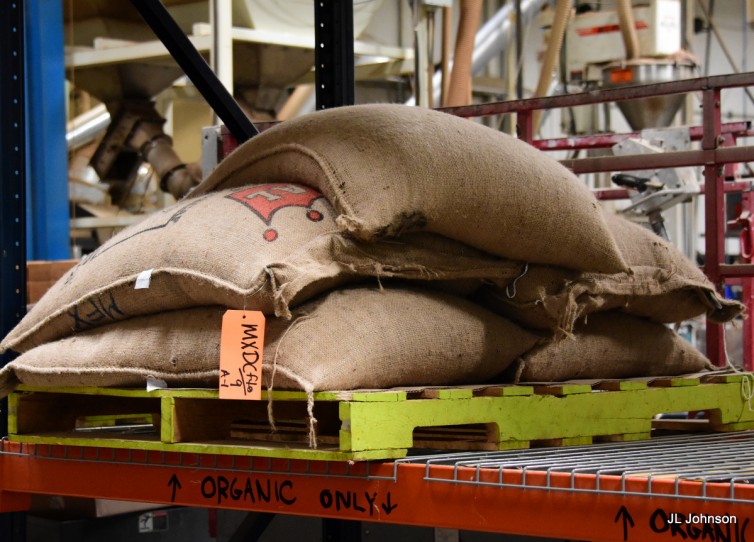 On the day I toured, I counted raw product from roughly a dozen countries. The Roasterie works directly with small family farms in around 30 different countries. All of their coffee is handpicked, and comes from only the highest altitudes in the various producer countries. I learned on the tour that high altitude coffee trees produce less fruit than low altitude trees, but the result is sweeter, denser seeds (beans.) 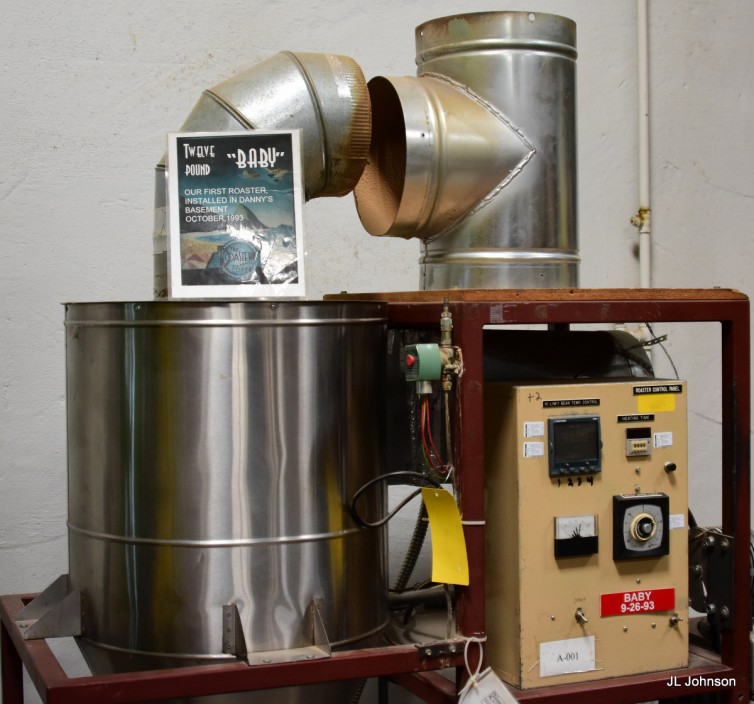 The Roasterie has just a few roasters, with fun names like “Baby” and “Brutus.” Their first roaster, Baby, was pretty cool. Its capacity was just twelve pounds, and it got its start in the founder’s basement. Without Baby, there would be no Roasterie. I can’t say the larger, more modern roasters were much to look at. Picture large furnaces with long exhaust and vacuum hoses for literally sucking up green beans into the roasting canisters.

The production floor was not running at the time of my visit, but the smell of coffee lingered. We had to finish our beverages in “The Bean Hanger” before starting the tour. With the smell and all this talk of coffee, I needed a fix… 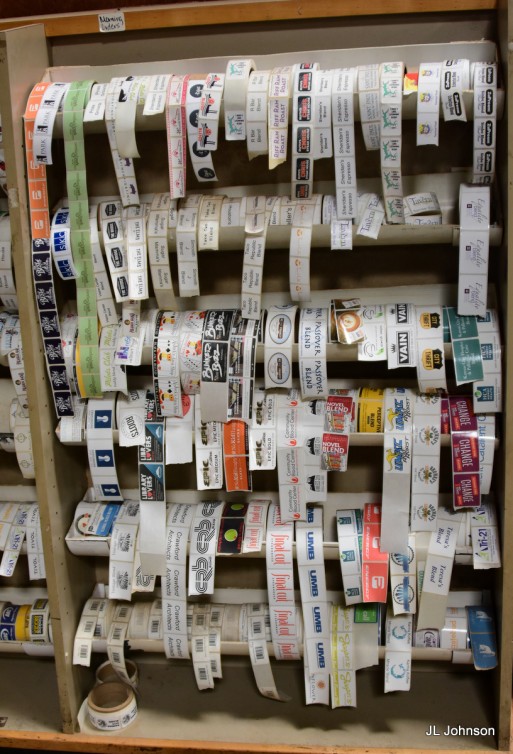 Towards the end of the tour I learned that each bag produced is hand-filled. After filling, a machine vacuum seals the bags and “flushes” the beans with nitrogen, removing oxygen (which is bad for roasted beans) and adding a small bit of nitrogen which extends the shelf-life of the product from about two weeks, to over six months.

As the tour ended, we exited again into the Bean Hangar where WolverBean taught us all about the French press and provided samples from the batch he live demo’d. On the way out, I ordered another drink… And bought a French press. 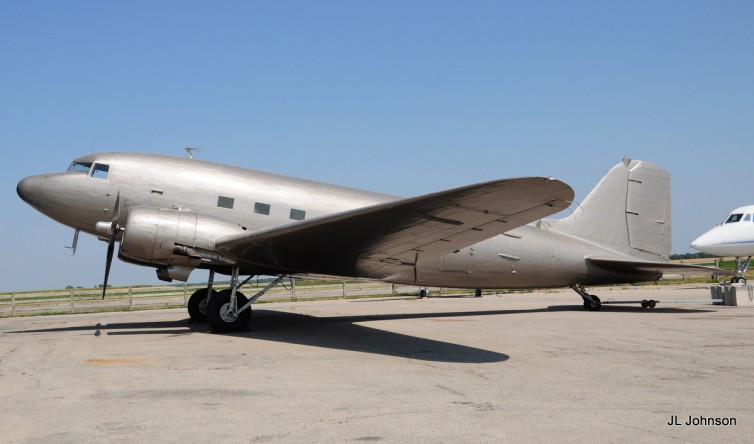 What’s up with the DC-3 anyway?

As an AvGeek, it seems totally natural to me for a fellow enthusiast to work one’s love of aviation into what they do. But it turns out the DC-3 has particular importance to The Roasterie. This specialty coffee company roasts their beans via a method referred to as air roasting. Air roasting is a technique used by an extreme minority of producers, which further differentiates The Roasterie from the competition in a crowded specialty market. With air roasting, beans are loaded into a roaster in which 680 degree air is blown in through the bottom. As a result, the beans literally fly around the roasting canister, receiving consistent, even heat. See the process in action.

DC-3s and their radial engines flew millions of passengers in their heyday. Today, The Roasterie’s roasters fly millions of beans through the air as they transform into lovable caffeinated brown seeds of joy. Coincidence? I think not! 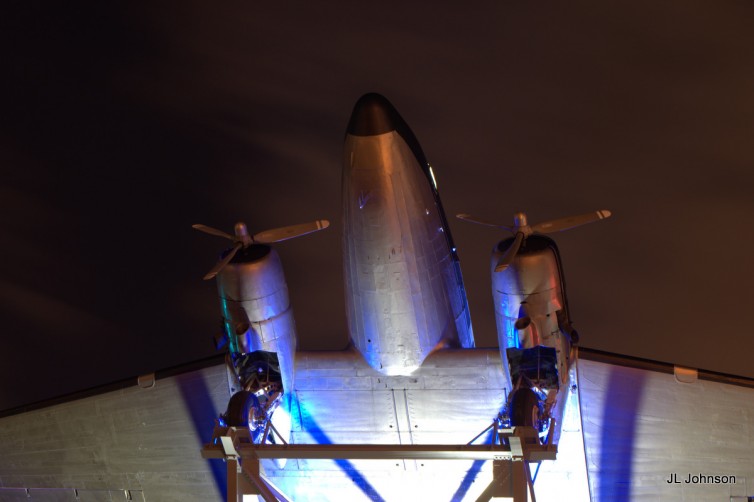 The C-47 from a view not many can get elsewhere

Some history on The Roasterie’s DC-3

Confession: We’ve been lying to you. The plane which sits atop The Roasterie’s building isn’t necessarily a DC-3. As eagle-eyed AvGeeks might have noticed, this plane once had a cargo door, something unique to the military variant of the DC-3: The C-47. Aside from minor differences such as a cargo door and tail modifications, the variants are nearly identical.

NC5931 was built and delivered prior to the formation of the U.S. Air Force. In February of 1944, it was delivered to the United States Army Air Forces, the last USAF predecessor. The plane served in various military roles across the world. In 1974 it was sent to “The Boneyard” at Davis-Monthan AFB in Tuscon, Arizona. It wasn’t long before the plane was picked up for Mosquito duty, a common role served by DC-3s and C-47s even to this day. After its time in Florida, the plane made its way to a KC-based company that specializes in DC-3s, and well, the rest is history.

Coffee is amazing. Having completed the tour I have a new-found appreciation for it, for the growers, and oddly, for the DC-3. The Roasterie does an excellent job of melding two of my loves. As a result I find myself drinking even more DC-3 themed coffee these days. I learned on the tour that an average coffee tree only produces around 1.5 pounds of beans annually yet the average American drinks the coffee of around 4 pounds of beans. I figure I drink more coffee than an average person, so it’s cool knowing there are about six trees at the top of a mountain in the “coffee belt” with my name on them.

The Roasterie is well worth a visit. Go for the DC-3, stay for the incredible coffee.

Qatar Airways Airbus A350 Long-Haul Review: Inaugural Service to Boston
The Airport Where Every 737 Takes its First Flight
5 Comments

Awesome. Same two passions I’ve adopted in life. On the KC bucket list for sure.

#MissionAccomplished! KC is easily overlooked, but we have plenty to do over an AvGeek weekend. Thanks for reading. JL | AirlineReporter

Cute article, almost enough to make me actually want to drink some coffee, but definitely enough to put Roasterie on my list of KC sights to see. Since this American does not partake, you can have my 4 pounds of beans this year JL.

Thanks for stopping by, Tony. It’s always great to see a comment from you.

PS: I already got your 4 pounds of coffee. The SM team shipped me a case of after I tweeted them about how bad AA’s coffee was compared to LIFT. Hahaha.