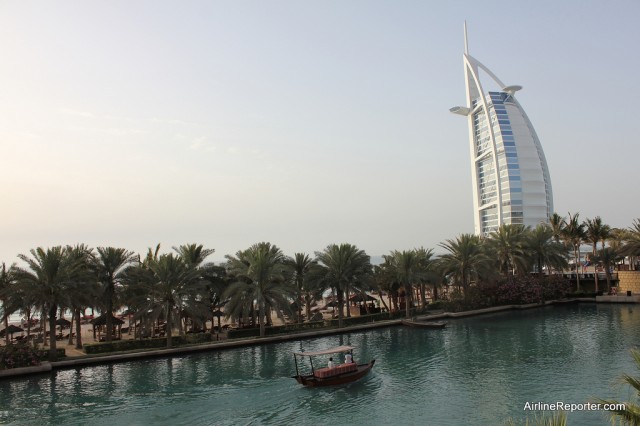 The Burj Al Arab is hard to miss and is beautiful, even on the outside.

Dubai is known for going to the extreme. Just being there feels like a big enough adventure, but if you want to take it to the next level, then you have to stay at the Burj Al Arab. You might know this hotel better as, “the only seven star hotel in the world.”

Actually, no official guide or rating agency has given the hotel its famous “seven star rating.” While taking the tour, I was told that the hotel has never advertised that, nor do they actually support its usage. It was a journalist who coined the phrase a long time ago and it has stuck. Surely, the saying can’t hurt the Burj Al Arab’s reputation. 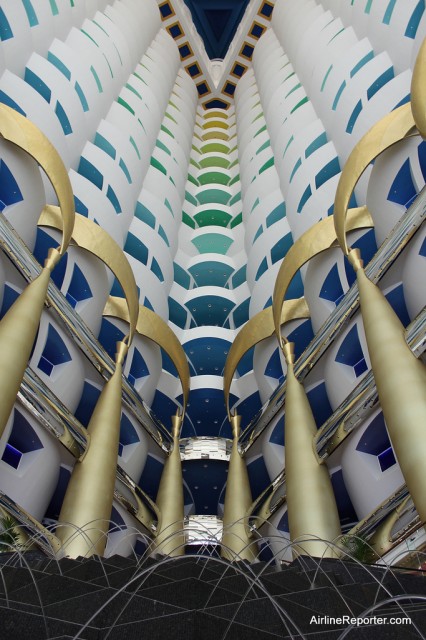 Once entering the The Burj Al Arab, be sure to look up for an amazingly rainbow view.

Not just anyone can get in the front door. There is a security gate, probably about a quarter of a mile from the hotel’s front door, and you need to show you have a room reservation to get through. If you want exclusive — this is it.

Luckily for me, when I recently visited Dubai, I was given a tour of the Burj Al Arab and just had to share what I experienced. 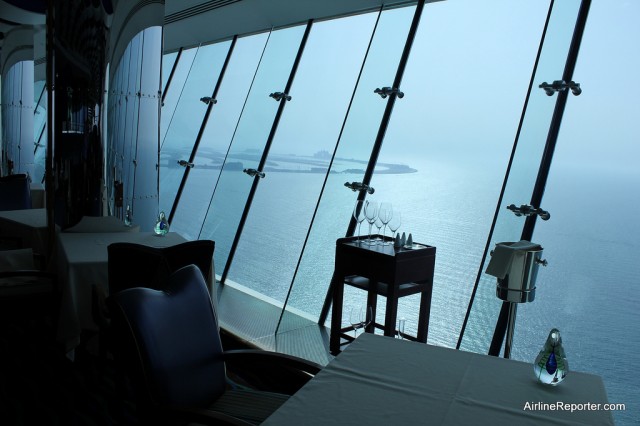 Al Muntaha Restaurant at the Burj Al Arab has an amazing view of the Palm Islands.

Construction on the Burj Al Arab started in 1994 and was completed in 1999. It is the fourth largest hotel in the world, at 1,053 feet. The design of the building was meant to mimic a sail and it has become an iconic symbol for Dubai.

When first walking inside, you are greeted by dancing fountains and escalators that have large fish takes for walls. Make sure to look up and check out the 590 foot atrium that is in the lobby (maybe don’t do that if you have vertigo). 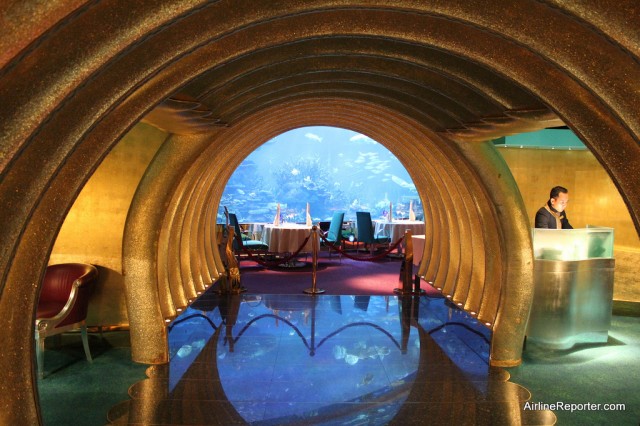 The Al Mahara Restaurant at Burj Al Arab might has the coolest view I have ever seen.

The hotel might be large, but there are not that many rooms — only 202. That is because each room is its own two-story suite, ranging in size from 1,800 square feet to 8,400 square feet.

There are two restaurants in the hotel; one up high and one down low. The Al Muntaha restaurant is found up top and provides amazing views of the Persian Golf and the Palm Islands.

I figured that view would be hard to beat, but in my opinion, the Al Mahara (which has no windows to the outside) has a more impressive view. 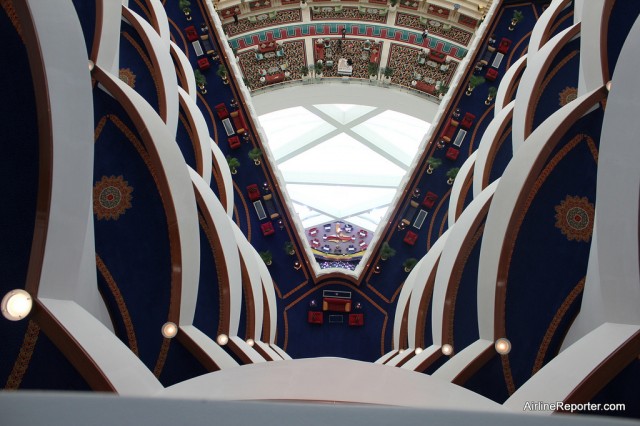 If you are afraid of heights — do not look down from the top floor. There are 25 floors down and three main levels you can see.

When heading to the rooms, each floor has its own concierge desk. Help is always close at hand to assist with anything that you might need. There are even butlers available 24 hours if you need one. 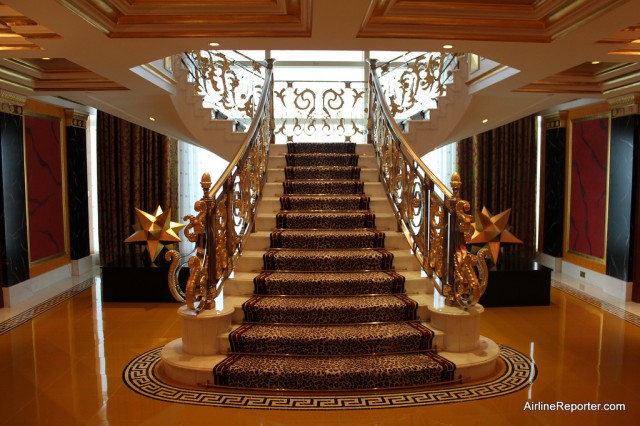 What a sight. A main stair case when you first walk into the Royal Suite. 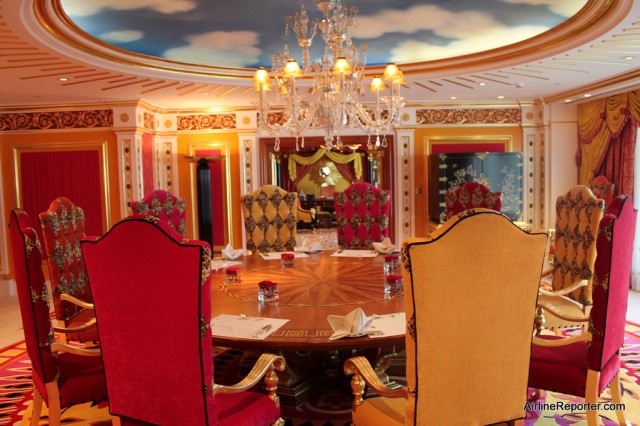 The Royal Suite has a very large (and colorful) dining room.

When walking into one of the two Royal Suites, located on the top floor, you are welcomed by a staircase — to go up or down? Or heck, if you don’t feel like taking the stairs, the room has its own elevator to go between floors. 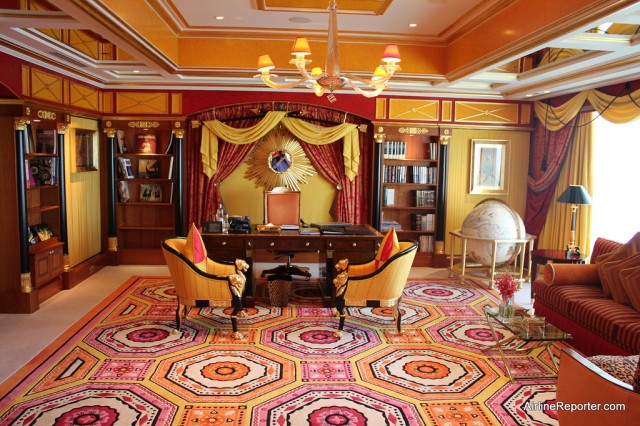 The office in the Burj Al Arab Royal Suite.

If you are color blind, you are missing out on seeing all the vibrant pinks and yellows and gold (lots and lots of gold) that is in the room. Heck, even the TV is painted in gold — boo ya (see the photo gallery below)!

There is also a kitchen downstairs and if you want to have a cook come in to fix you something, no worries about them having to use the front door, the “help” have their own private entrance directly into the kitchen. 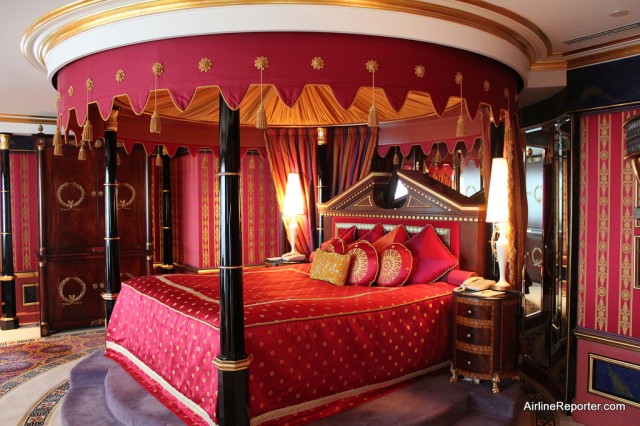 One of two master beds in the suite.

Upstairs are two very spacious master bedrooms. Each with their own sitting area and enormous bathroom. I am pretty sure that the bathroom (with full walk in shower and jetted tub with columns) was bigger than my first apartment. 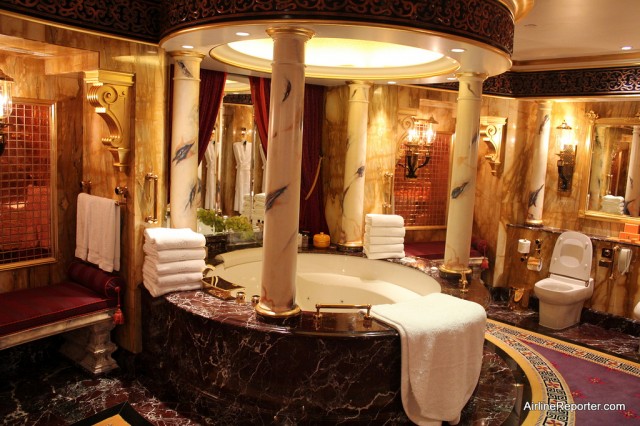 One of the master baths.

My eyes were hurting a little bit after leaving the Royal Suite. I could see where some might like the color scheme, but I am not much of a pink/yellow/gold guy and those colors were quite popular.

I have been in many nice hotels and settings, but this one actually made me feel a bit out of place, being so large and costly. Not that I wouldn’t be willing to try and get used to such accommodations. 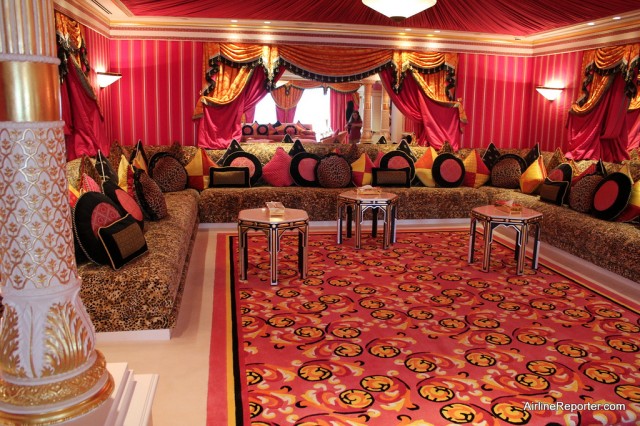 Probably my favorite sitting area in the Royal Suite.

Honestly, after leaving the Royal Suite and looking at a smaller room, I forgot to take photos. I was pretty much like it just didn’t matter anymore after seeing the larger room. 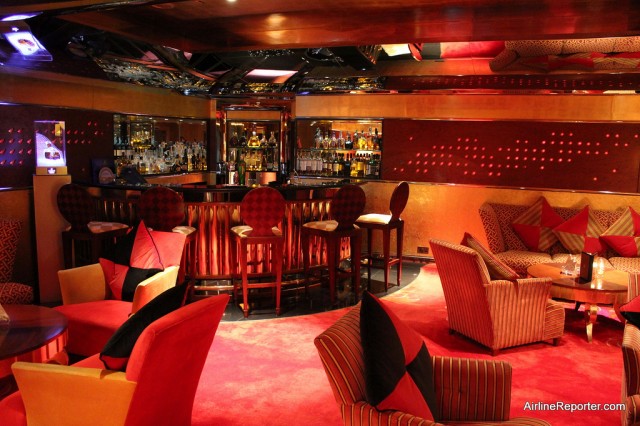 Cigar and scotch bar in the Burj Al Arab.

At a hotel like this, you can expect some high-end service. They offer a fleet of Rolls-Royce cars to take you around town, but that might be too “common” for some folks. They also offer helicopter transfers, as well as scenic tours from the air. More common is the access to the Assawan Spa and Health club, a private beach, a kid’s room and much more.

Much like Dubai itself, the Burj Al Arab is a unique experience that is hard to find anywhere else. I was not able to have the opportunity to stay the night in the hotel (only the tour), but I would imagine with the number of hotel employees I saw everywhere, the customer service experience would match up well with the product.

Last month in our taxi to Burj Khalifa we saw the hotel in the distance.
Pretty impressive even far away.

Wow! Really, wow! I don’t think I will ever make it to the Burj Al Arab. Thank you for sharing the great photos and the story of your visit.

The rooms are just stunning and I would love to eat in the Al Mahara restaurant with the aquarium. You were so lucky to be able to visit!

What a place to visit and see for myself for just five minutes i am ok. Who will take me to this Hotel?

I read your pontisg and was jealous

After looking at a number of the blog posts on your web site, I
truly like your technique of blogging. I saved it to my bookmark website
list and will be checking back soon. Take a look at my website as well and let me know your opinion.

After checking out a few of the blog posts on your website, I
seriously like your way of blogging. I book-marked it to my bookmark webpage list and will be
checking back soon. Take a look at my web site too and tell me your opinion.