Kansas City is indisputably a TWA town. Most don’t know that the airline can trace its roots back to KC. Additionally, one of its two former KC-based headquarters is, in fact, now home to the one and only TWA Museum. It’s here at 10 Richards Road in Kansas City that Howard Hughes once officed, and where the airline witnessed explosive growth as passenger aviation quite literally took off. 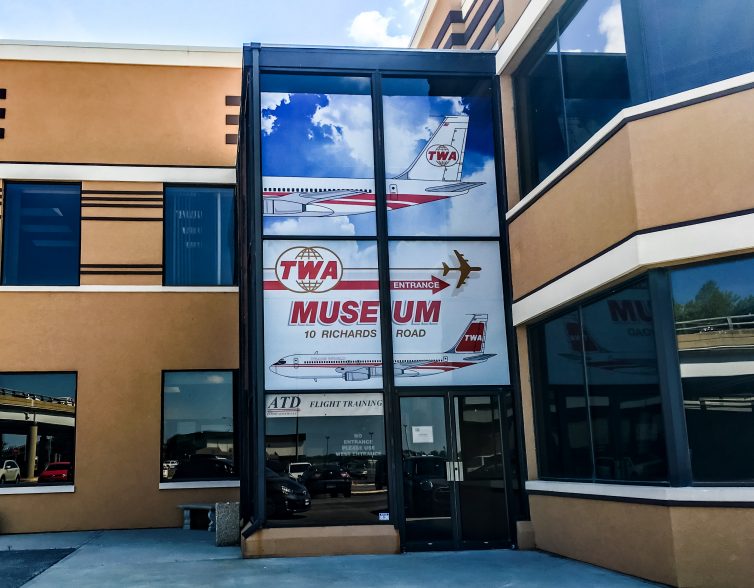 If you are looking for airplanes, the TWA Museum is not for you. If you value memorabilia, pristine models, excellent posters, and first-hand recounts of “the good ol’ days”, look no further. The TWA Museum, which is open Tuesday through Saturday, is run by a mostly volunteer staff. Most of the staff are former TWA employees or those who were close to the airline during its golden age. On the day I visited, Keith was my very knowledgeable and patient docent, while a former flight attendant ran the front-end operations. The TWA Museum is by no means large but thanks to a very dense, albeit well organized collection, it would require an hour at minimum to fully appreciate. Admission fees range from free for active-duty military through just $7 for adults. 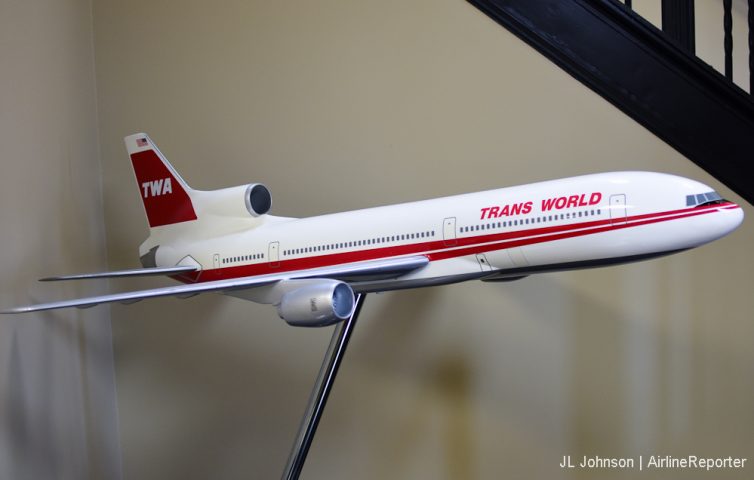 An L-1011 model greets you upon entry into Signature Flight Support, the FBO where the TWA Museum is located

The TWA Museum is located at what is now the Signature Flight Support FBO on property at the downtown KC airport. While TWA once commanded the entire building, the museum occupies only a few rooms towards the back covering, at best, under 1,000 square feet. But don’t let its size fool you; the museum has a lot to offer. The location of the museum within the building works well, because the entryway is at the end of a long hallway, a hallway decorated top-to-bottom in TWA posters and memorabilia. 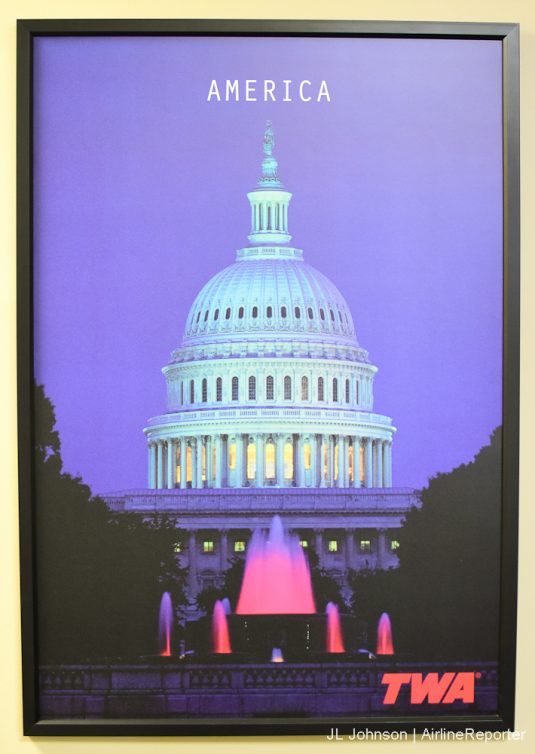 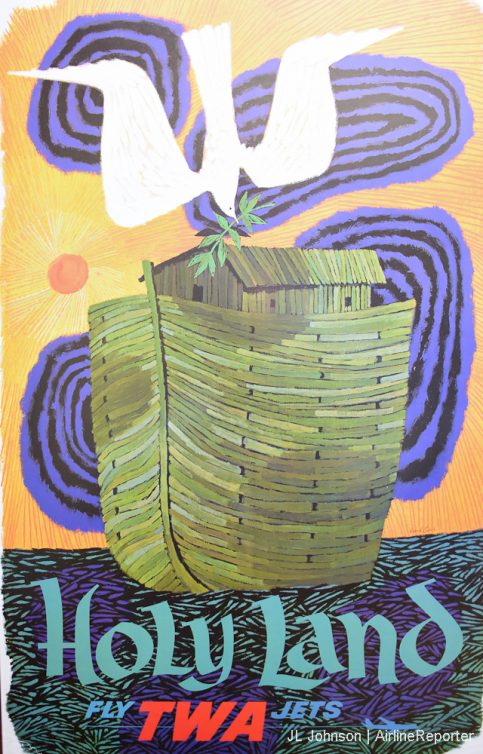 Marketing art for Israel at the TWA Museum

My first impression was one of awe as I browsed the striking and rich marketing art which was on display throughout the museum and its corridors. Pictured above are two pieces which I found to be particularly impressive. 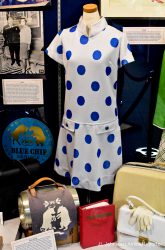 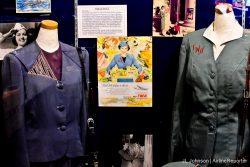 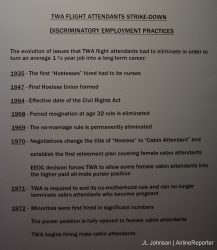 Timeline of TWA’s easing of discriminatory treatment of flight attendants

I have visited dozens of AvMuseums across the U.S., but this one seems to take special care to capture and preserve the history of the flight attendant. While other museums have a few uniforms on display, the TWA Museum places a great deal of emphasis on uniforms, accessories, and the work of flight attendants to combat discriminatory polices towards them. Most, if not all aviation museums I visit elevate the positive over the negative, while this one uniquely and correctly highlights the plight of flight attendants over the years. A few shocking facts I picked up on my visit:

These are uncomfortable facts, but it is good that the TWA museum is doing their part to help us understand that blatantly discriminatory practices towards women are not as far in our history as we would like to think. Of course there is still work to be done to obtain true equality for all. Finally, while we have come a long way here in the United States, it’s worth noting some airlines abroad still subject their flight attendants to punitive rules equivalent to those above.

This large 747 is the centerpiece of the main room of the TWA Museum. 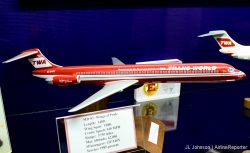 A TWA Wings of Pride model. Little did they know the real one would be parked just outside.

TWA’s concept for the Boeing Supersonic Transport (SST), sadly this project quite literally never took off.

BONUS: Wings of Pride: A TWA Plane That Was Nearly Forgotten

The TWA Museum is home to a wide variety of aircraft models wearing many different TWA liveries. While I am not a model aficionado, I know many AvGeeks are. The detail on many of the models is incredible. I was particularly fond of the very large 747 with full cabin interior visible. The TWA Wings of Pride model perfectly matches the original Wings of Pride, which happens to sit outside on the ramp, and the TWA mockup of the Boeing supersonic transport (SST) was a great reminder of what could have been. 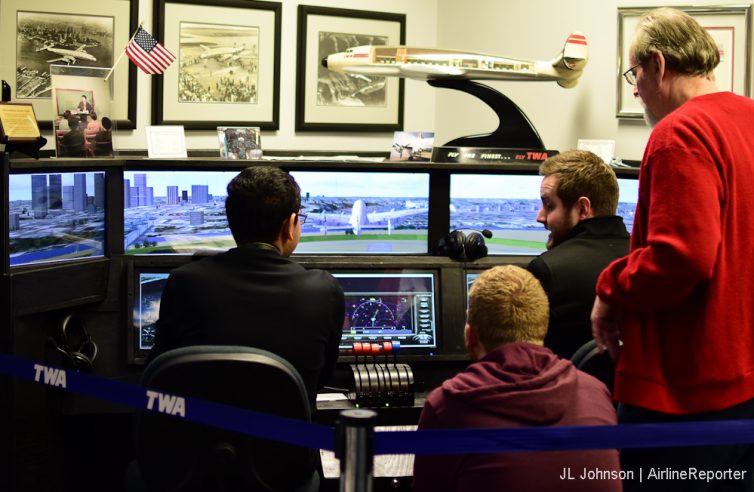 How many AvGeeks does it take to land a Connie?

BONUS: Flight of the Connie: The Incredible Story of the Star of America

An unexpected and pleasant highlight towards the end of the tour is an opportunity to land a TWA Lockheed Constellation on an eight-screen flight sim. Every other museum I have visited charges a fee for their quick sims, a fee which typically exceeds the cost of admission into the TWA Museum. Not here. It’s a nice bonus.

The TWA Museum is small but dense, and well organized. It is definitely worth the cost of admission which currently maxes out at $7. Expect to spend at the very least one hour on the guided tour plus self-led browsing. While admission for children under age five is free, as a father myself, I would recommend not bringing them along. This is decidedly not a child-centric museum and having young ones tag along might lead to a rushed experience.

Very nice article. I’d love to visit the museum. I have fond memories of the many times, as a young aeronautical engineer traveling the country, I rode TWA Connies from Nashville to St. Louis to pick up either an 880 or 707 to complete my journey.

Yes, those were the days and I was very fortunate. I also flew Electras, various Convairs, F-27s and DC-7s before the jets took over. The ”flight attendants” were ”stewardesses”, all young, female and unmarried. You could even get playing cards and postcards on-board. How things have changed!

Don’t feel bad. The 737-200 was one of the early twin-engine short-haul jets and is nothing like the twins of today. The airlines loved it and so did the passengers.

I loved flying TWA long ago. They along with PANAM, were the standards for the golden age. Im not that old at 50 but I remember as a kid how they glamorized flying. I miss that. Every time I fly through either MCI, or STL I cant help but think of TWA. They are what made me want to be a flight attendant(which I still am). Best Regards.

Was there a section dedicated to Ozark Air Lines? There is a small section at AA’s CR Smith museum dedicated to TWA. It would be nice if the museum returned the favor to their acquisition.

There is a small Ozark Air Lines museum at the Community America Credit Union just west of STL’s Terminal 1.

The National Airline History Museum is just two minutes away. Catch them both!

Majority were later sold to AirTran Airways and are now operated by Delta Air Lines ; remaining orders were cancelled.

The TWA “Up Up and Away” campaign was concieved and run by my father Donald “Don” Woolf, Creative Director for Foote, Cone & Belding New York who held the TWA advertising account from 1956 until 1968.

Don came up with the origional idea for “Up Up and Away,” including the song rewrite for TWA which he executive produced agency side in New York City. In his capacity as Creative Director he sucessfully executive managed all aspects of the TWA campaign in television, radio and print for its duration.

In 1968 Don accepted an offer from J.Walter Thompson as Creative Director heading The BOAC Airlines account (now British Airways). He went on to achieve the same acclaim and popularity worldwide for BOAC as he had with TWA with the “Our Airline” campaign featuring British Actor Robert Morley as spokesperson.

Don was nominated for and won several CLEO Awards (The Advertising business’ equivalent of an Oscar) for his creative work with both the TWA and BOAC accounts. He displayed them at home instead of the office though, being modest by nature despite the success of his work.

In 1976 Don founded his own Agency, Norfolk Partners in Boston Massachusetts which he ran till retirement in 1986. He passed away in Green Valley Arizona in 1999.

I worked at the service bureau – John Felix Associates – that did the non-advertising programming for TWA, where I wrote some programs for TWA flight scheduling. I have been trying to locate the original version of the “Up, Up and Away” commercials but cannot find it. There is a version on You Tube but that is not the original versions as it has a male singer, which the original did not have, and also reverses the tag line with “TWA” coming before “Up, up and away”, instead of after it. I also flew TWA for many years.

Perhaps with your father’s association with the ad campaign you would know where I can find a recording of the original version of the commercial. That would be very much appreciated.

Before he died, Don had his career highlight work transcribed from film to digital format. Since this was in the 1980’s, he used a medium that is archaic today, ‘Syquest’ – a form of digital cassette. Though I have the cassettes, there’s no way to play them since Syquest players are long gone. YouTube has a later version of one of the commercials though, in which the “TWA” vocal line was switched from last to first in the end chorus.

Don’s “Our Airline” BOAC TV campaign ads are also online, and you can see one of those featuring British actor Robert Morley (whom Don hired as spokesman for BOAC) here: http://www.hatads.org.uk/catalogue/record/3b525358-f0ed-4931-b97e-a4fb00d9cdaa

Shai from Audio Video Film Digitization (above) asked that I put his email address here so that you can contact him directly:

I am so glad there is a TWA museum. It’s very unfortunate we no
longer have TWA for it pioneered so many firsts, like showing movies on Airplanes. TWA was also the first to fly twin engine Boeing 767’s across the Atlantic from JFK. The meal service was always good on TWA even in coach. Really, think about that- good meal service in coach. My first flight was on a TWA Martin 404 from Baltimore, Maryland to Wheeling, West Virginia as TWA flew everywhere in those days. I so miss TWA and thank you deeply for preserving its legacy!