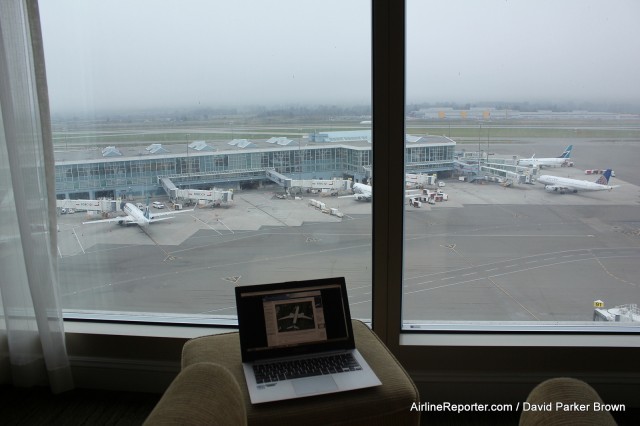 Reading a fun website while looking out the hotel room is awesome.

There are hotels and then there are AvGeek hotels. The Fairmont Vancouver Airport Hotel is surely an AvGeek’s hotel, but can still be enjoyed by those who are more practically-minded. The hotel is located inside Vancouver International Airport (YVR), which makes it convenient for people who are flying. There is no need to find a shuttle and you can sleep in until just before your flight, roll out of bed, and either start or continue your journey.

But for many who enjoy aviation, these rare hotels provide something a little bit more: sleeping and relaxing while airline spotting. Heck, it is a thrill to stay at an airport like this, even if you are not flying anywhere. Recently, that is just what Malcolm and I did to check it out, and we wanted to share what we found. 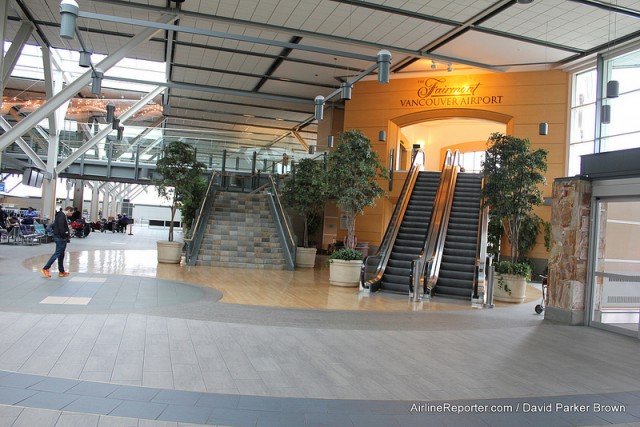 It is very easy to transition from the airport to the hotel, since the hotel is in the airport.

Mal had been to the hotel many times before and even though we both live in the Seattle area, we drove separately since I was vacationing up north with my wonderful girlfriend. I probably should have planned how to get to the hotel a bit better, because I have to admit it was a bit confusing trying to find out where I should park to access the hotel.

My navigation system unfortunately took me to the backside of the building, which was restricted and when I finally found the front, it was also where passengers are dropped off for their flight. Luckily, there were some hotel staff based at the entrance that explained I could either use valet parking there or park myself in the garage and take the short walk back to the hotel. Since I enjoy walking around airports, I opted to park and walk. 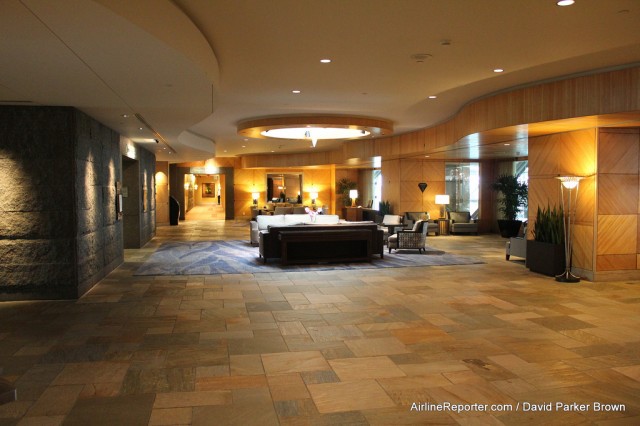 Although the lobby is quite nice, the view outside of the airport is better.

If you are planning ahead and wish to stay at the hotel, it is probably best to make a reservation. As one would imagine, it books up quite quickly when a fight or two has some long delays, or inclement weather moves in (which Vancouver can be known for). 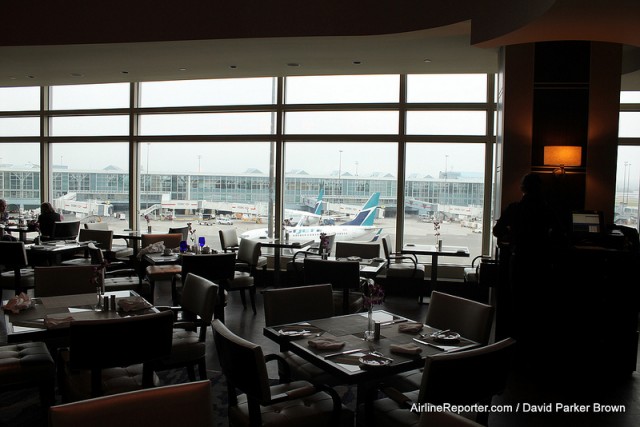 The restaurant and bar have awesome views of the airport.

The nice part about the restaurant and bar? You do not need to be a hotel guest to access them. There are plenty of other great options within the airport, but if you have some time to burn and don’t mind going through security again, it can be worth heading over to the Fairmont. 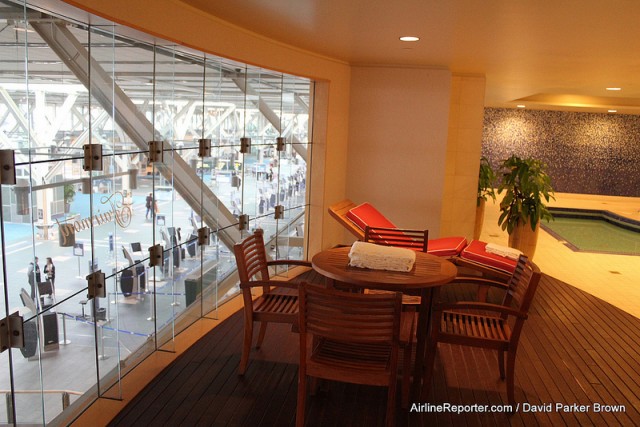 Watch out for those belly-flops; the workout/pool area looks onto the airport terminal.

Some passengers will decide to use the hotel’s amenities without staying long-term. Many passengers will have layovers between long flights at the airport where a little nap and shower can go a long ways. The Fairmont offers a rate of $99 to use a room for four hours – just long enough to get refreshed to continue your journey. If you get bored of watching the planes (ha, like that would happen), every Fairmont gives guests the opportunity to rent a bicycle, made by BMW, and ride around the area. There are quite a few places to go around the hotel and I would recommend bringing your camera to take some photos around the airport. 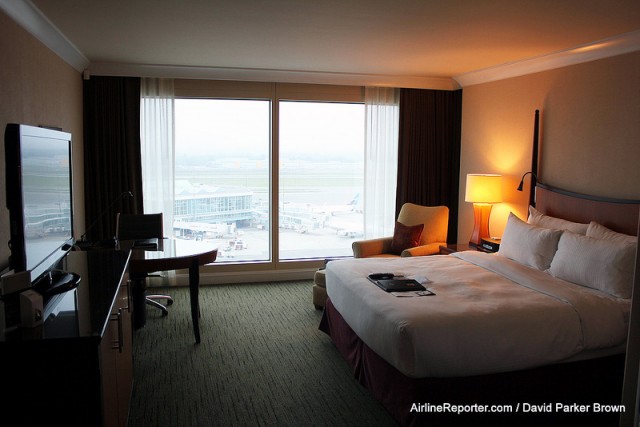 The rooms are quite comfy. Some come with binoculars or telescopes.

The rooms are very comfortable and almost all offer great views of the airport. Once arriving and taking my photos, I quickly moved the main chair to face out the window and set up a semi-office area over looking the aircraft. The hotel offers free Wi-Fi if you are a member of their President’s Club (which is free to join – thanks to Mal for that heads up). Unfortunately for my visit, a heavy fog rolled in mid-evening and stuck around until I left late the next morning. Although it cut down on my ability to take better photos, it allowed for an interesting glow when sleeping with the curtains open.

The noise of the airplanes was quite minimal. My room was on the edge of the building right next to where the Bombardier Q400s operate. I was able to hear a low drone of their engines and of course the low roar of jets taking off, but the hotel has done a great job of keeping the noise out. Of course, for many of us aviaion-minded folks, I actually wouldn’t mind being able to hear the aircraft a bit better.

Mal actually prefers the opposite side of the hotel – the north end above the international gates. He is not a fan of the Q400 sounds. Either side will have its pluses and minuses. 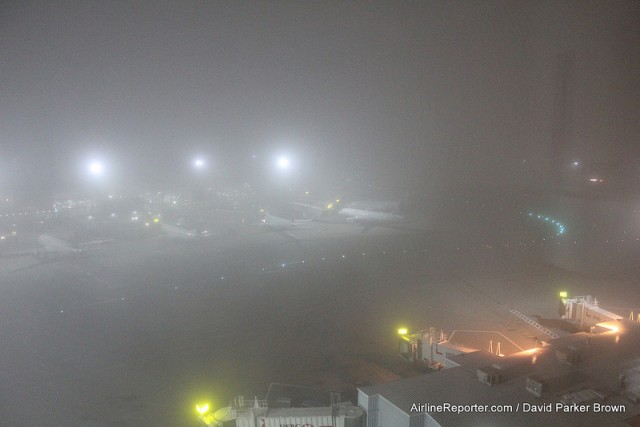 Unfortunately it was foggy overnight and into the morning.

Although the view was my favorite part, Mal actually loves the beds the most. “Sounds really silly but for me the favorite part of the hotel would be the bed,” Mal explained to me. “The beds at the Fairmont are just divine and I loved it so much the first time I stayed there, I bought one (almost at the full set up, just need the sheets the pillows & pillow top).”

If you want to take your AvGeek-ness to the next level above just watching airplanes from your room, then you also want to check out their Learn to Fly Simulator Package. This is where you get to head on over to an Air Canada Boeing 767 flight simulator and take the controls for a 60 minute amazing experience. It will set you back $999 CDN, but what an adventure. Unfortunatley during my visit we were not able to check it out, but I have been lucky enough to fly a few airline sims and let me tell you – it is amazing.

Note: We were provided a complementary night at the hotel in order to conduct this review.

This hotel was awesome, I have to agree. It is one of the recommended hotels for Disney when they have their Alaska cruises leaving out of Vancouver, and my family stayed there the night before our cruise left. They had to pry me away from the window to check out the rest of Vancouver since all I wanted to do was watch the operations down below. The treadmills in the fitness center overlooking the terminal was also pretty awesome.

While not in the hotel, I did appreciate the international arrival area and the quick little Disney-esque walk through the Canadian wilderness they have set up.

YVR seems to do everything right.