It’s not often that we here at AirlineReporter review hotels. In fact, a property must be exceedingly special to attract our attention. Take, for example, prime PlaneSpotting properties like the AvGeek favorite Renaissance Concourse HotelÂ in Atlanta, or equally impressive Fairmont Vancouver Airport. And of course, who could forget the world’s only seven-starÂ hotel, in Dubai.

But what about a lowly three-star former Holiday Inn Express turned independent hotel in Kansas City? What could they possibly offer of interest to a fiercely loyalÂ major brand status holder and admitted hotel snob like me?Â A lot, it turns out. KC’s 816 Hotel (that’s our telephone area code for those not in the know) has done a lot to distinguishÂ itself from the pack in appealing to folks from all walks of life. The property has over one hundred rooms, with twenty themed rooms. These unique rooms range from representing our various sports teamsÂ to our local newspapers to themes far off the beaten path:Â KC Mob or BBQ room, anyone? And while any of these might appeal to the general population, the gems that caught my eye were those dedicated to theÂ Roasterie DC-3 and TWA.

I was lucky to score a night in the ever popular TWA room. Here are my thoughtsâ€¦

Kansas City is indisputably a TWA town. Most don’t know that the airline can trace its roots back to KC. Additionally, one of its two former KC-based headquarters is, in fact, now home to the one and only TWA Museum. It’s here at 10 Richards RoadÂ in Kansas City thatÂ Howard Hughes once officed, and where theÂ airline witnessed explosive growth as passenger aviation quite literallyÂ took off. 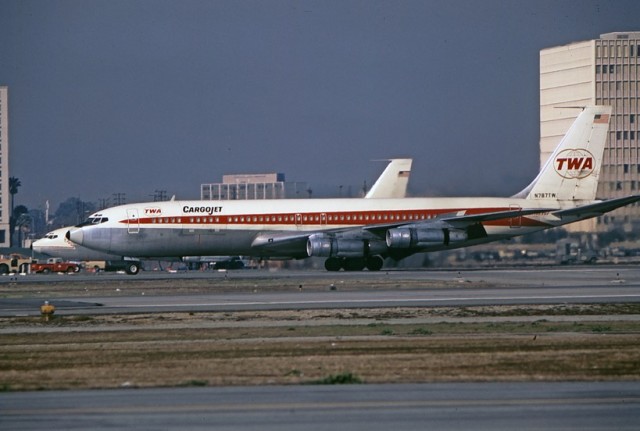 In 2000, Trans World Airlines (TWA) was celebrating their 75th anniversary. It is too bad the airline would last only about a year longer before being merged with American Airlines at the end of 2001. I am not fully sure, but it appears this video was shown on the airline before taking off. The introduction from the manager of advertising is a little slow and dry, but work getting through to see the ten old advertisements from TWA. From “TWA’s the way” ad campaign from the 1960’s to the “one mission…yours” from the 1990’s, there’s a little bit of everything.