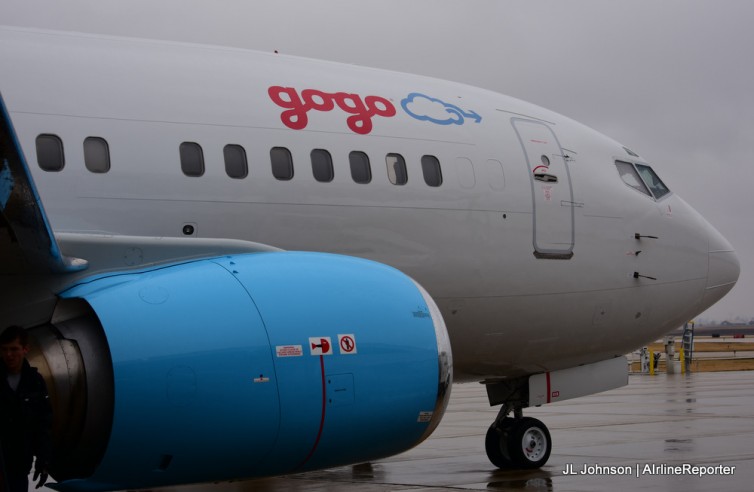 Last Saturday (the day before the flight), three of us from AirlineReporter (David, JL, and myself) joined our winners in downtown Chicago’s Loop neighborhood.  As luck would have it, that date just so happened to coincide with Chicago’s massive annual St. Patrick’s Day celebration. Walking around the streets of Chicago that day was an interesting experience – I don’t think I’ve seen that many people, that intoxicated, that early in the morning since my college days. Still, it was a lot of fun to walk around and experience the festive atmosphere, check out the dyed-green river, and just take it all in. 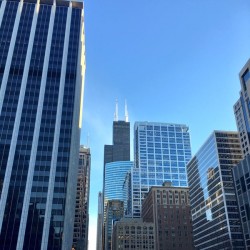 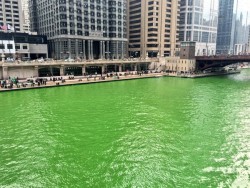 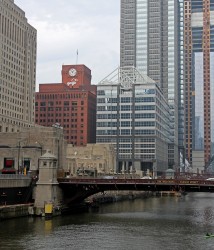 That evening, Gogo treated us all to an amazing dinner at the Signature Room at the top of the John Hancock Center, 95 floors above street level. Everyone had a great time enjoying delicious food and taking in the spectacular view. It’s always interesting listening to the conversations that happen when you get a bunch of AvGeeks together. I overheard discussions on topics ranging from the virtues of the MD80, to jet engine bypass ratios, to which airlines have the best upgrade policies – exciting stuff. 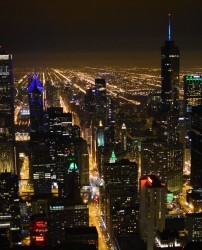 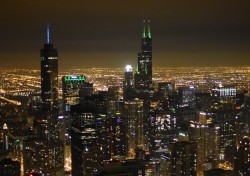 The view from the Signature room, atop the John Hancock Center – Photos: JL Johnson | AirlineReporter

We awoke Sunday morning to grey skies, light rain, and deserted downtown streets – all of Chicago seemed be having a massive hangover from the previous day’s celebration. For us, however, the party was just getting started. Our hour-long ride out to the plane was in a fully decked-out party bus. It was definitely odd (awesome?) to be cruising around Chicago at 8:00am on a rainy Sunday morning in a bus with colored lights, an LED special effects ceiling, and a thumpin’ sound system.

We finally arrived at Aurora Municipal Airport (ARR) and filed into the FBO to await the plane. In short order, the aircraft was towed to the ramp as everyone snapped photos and took video. Even though Gogo operates N321GG under general aviation (GA) rules, because a 737 is a sufficiently large aircraft, all passengers are still required to undergo a security screening. For this flight, the checkpoint consisted a few security personnel, a folding table, and a metal detector.  It definitely took a bit longer to clear this security than your average TSA checkpoint, fortunately there were only a handful of us to be screened. 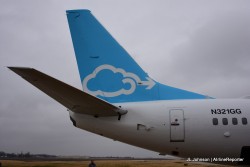 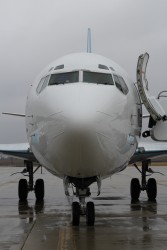 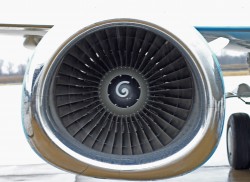 Some of N321GG’s exterior details

There’s just something about big jets – no matter how many times I have flown on them, every time I approach one my heart rate quickens and I feel a sense of awe – this time was no different. I have to say, N321GG is a thing of beauty. I love the Gogo branding, and I think it really works well as an aircraft livery. I especially like the chromed engine intakes – a unique touch that I have not seen elsewhere. 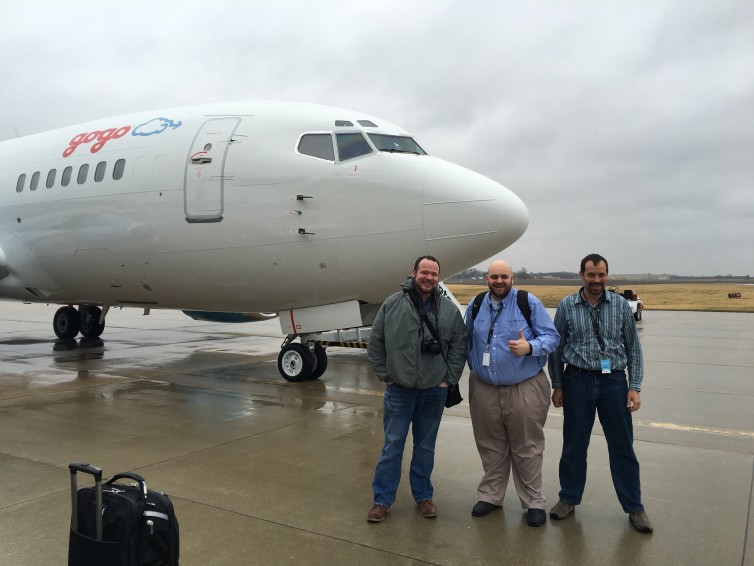 We all (AirlineReporter writers and contest winners) had a great time walking around the plane and snapping photos, despite the increasing intensity of the rain. 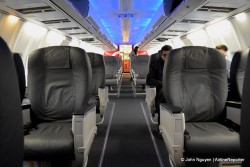 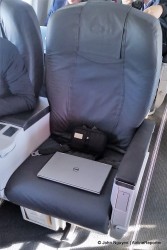 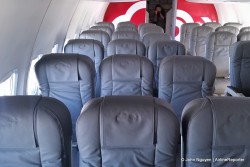 Gogo has done some nice things with the interior of the 737 as well.  The first four rows are comfortable leather first class seats, while the back half of the aircraft consists of typical economy class seats, albeit with a significantly better pitch than your average airline equips. There are a total of 60 seats on the plane – pretty roomy when you consider that more than twice that many seats are outfitted on a typical commercial 737-500. Fun fact: the seats are old Delta units that were refurbished to have a second life. 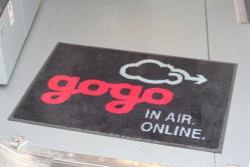 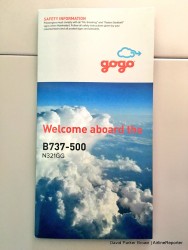 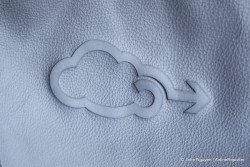 Most impressive to me is the effort that went into branding the aircraft. The headrests, overhead bins, safety cards, bulkheads, and floor mats had all been treated to Gogo’s brand. Even the cups and napkins sported the company’s logo. 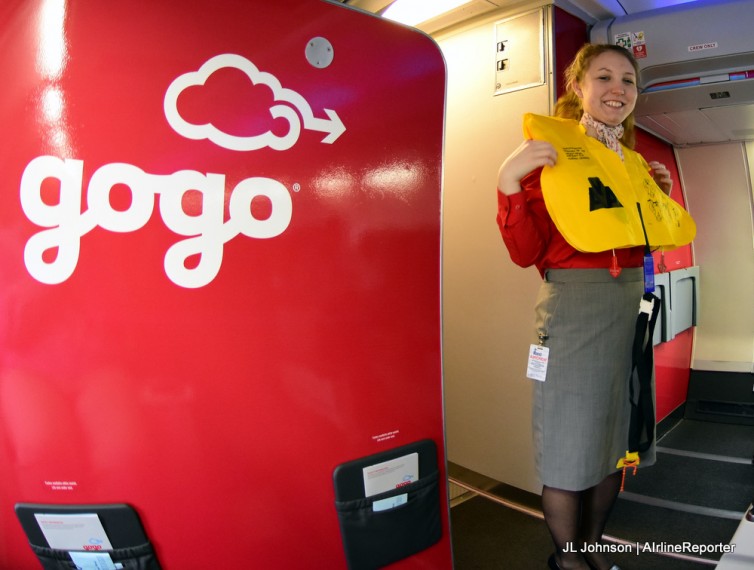 Before takeoff, we were given a short safety demonstration, which was amazingly similar to one you would hear on a typical commercial flight. For takeoff, David got to ride in the cockpit jumpseat. As the video can attest, he had a great view!

The climb out was amazingly cloudy – we didn’t see the sun poke through until we reached an altitude of around 20,000 feet. Once we were in flight, all the electronic devices came out, as everyone wanted to try out Gogo’s next-generation 2Ku in-flight wifi product. I can attest that 2Ku was indeed very fast.  Walking through the plane, everyone was talking on Facetime or Skype, streaming Netflix, or (in my case) downloading massive .pdf files for work. 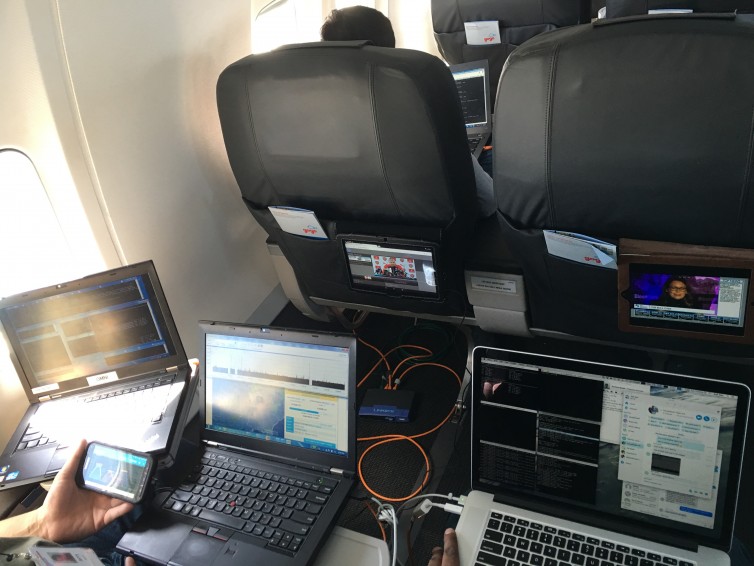 Several of Gogo’s network engineers, who accompany the plane on every flight, had at least five different devices streaming all kinds of things.  The plane’s internet connection kept up with it all, with bandwidth to spare. 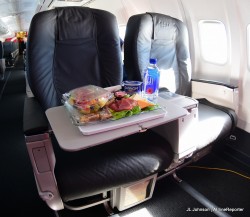 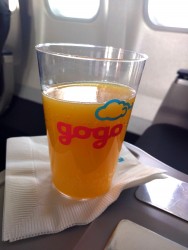 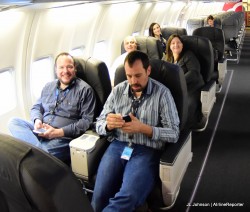 Aboard the AirlineReporter / Gogo party flight

As we leveled off at cruising altitude, the flight attendants distributed Mimosas, as well as a delicious meat, cheese, and fruit tray.  I’ll admit to having had seconds on the Mimosas. 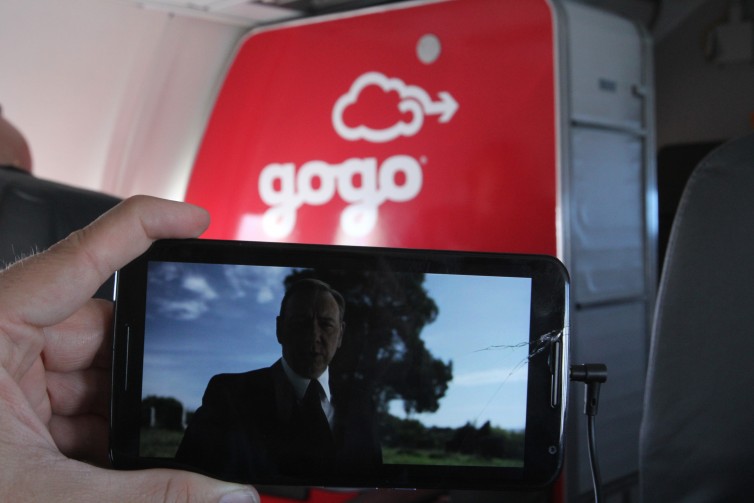 I decided to take the 2Ku WiFi for a test drive. I loaded up Netflix on my phone, and I was truly impressed at how quickly it started playing House of Cards, at full HD quality, without any buffering. 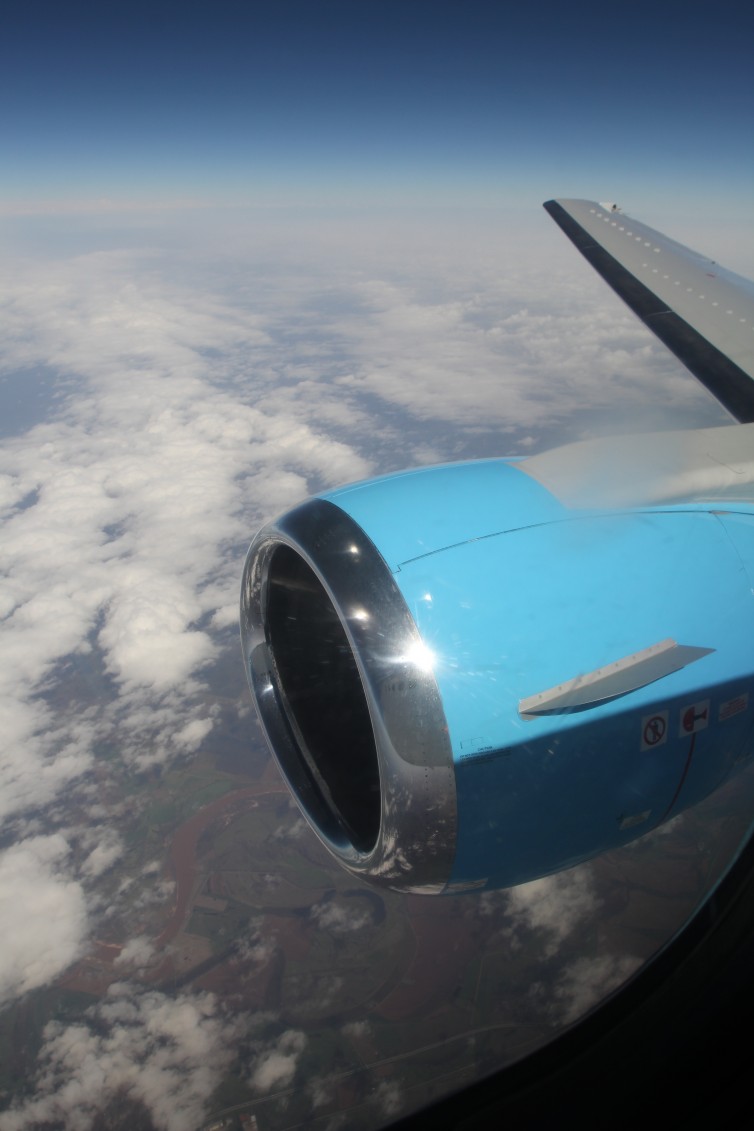 N321GG crossing the over the Red River into the Lone Star State – Photo: David Delagarza | AirlineReporter

As we made our way south, the clouds below us slowly gave way to clear skies. I glanced down just as we crossed over the Red River near Texarkana, officially entering the Lone Star State. 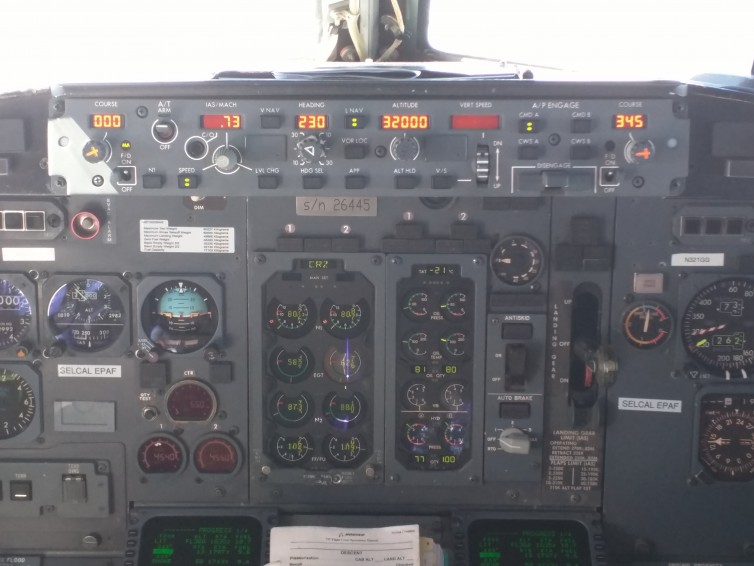 I watched on the flight computer as we followed the SWEEZY Two arrival procedure into Austin, quietly chuckling to myself about the Star Wars themed waypoints, such as SSOLO, VADRR, and JEDYE.

As a private pilot, I found the landing to be quite interesting.  We were landing into gusty crosswinds and I was surprised to see just how much control input it really took to guide the plane to the ground.  Really, it didn’t look much different than flying a Cessna 172 in a strong crosswind. Even with the crosswind, the pilot did a great job, touching down smoothly right on the centerline of runway 17L.

After a quick taxi over to the general aviation ramp, we stepped off the plane into the warm Texas air. The heat and sun were definitely a huge contrast from the cold, wet weather we’d left behind in Chicago – it’s amazing what a few hours in a jet can do. 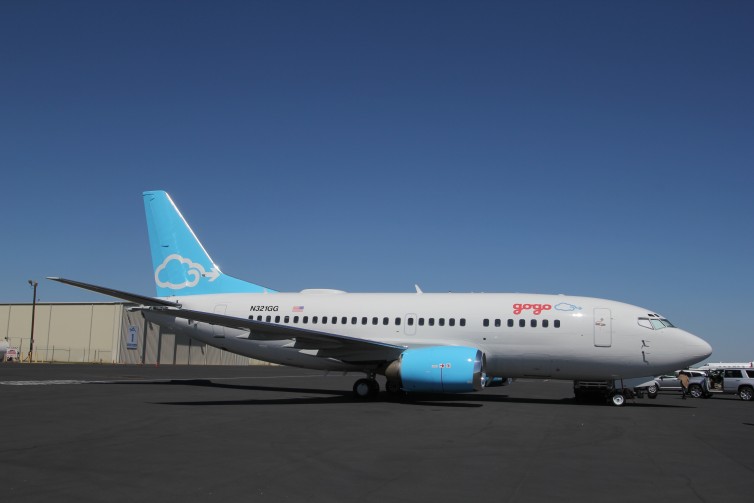 For most of us, Austin was the end of the line. The Gogo folks and the plane would be sticking around Austin for a few days, and giving a few test rides to SxSW participants. The rest of us caught taxis over to the terminal building, enjoyed some Texas barbecue, and caught our flights home, with dreams of 2Ku dancing in our heads.

All in all, this was an incredible experience that we here at AirlineReporter were really excited to be able to share with our readers – not just the lucky few who won the flight, but those of you who followed along on social media and on the website.  It turns out, a lot of fun can be had when you have a 737 to play with. We’ve got more cool stuff coming soon – stay tuned!

Note: Gogo covered all flights and accommodations for this trip; all opinions are our own.

https://www.airlinereporter.com/author/davedlg/
An American Boeing 727 Prepares to Fly to the National Airline History Museum
Opinion: LAX Story – Why the Terminal 4 Connector Matters To You
4 Comments

fun to see the pilots using (relying?) on a Stratus II in the cockpit!
😉

Loved reading this – sounds like a good time had by all!

As one of the contest winners, besides having a great time in the GoGo plane, I used four different devices to ‘Test’ GoGo on the go. I was surprised how perfectly I could watch Netflix, watch another on Hulu, my Surface was downloading files from our VPN and my Galaxy 6 was playing music.
A+++ from me