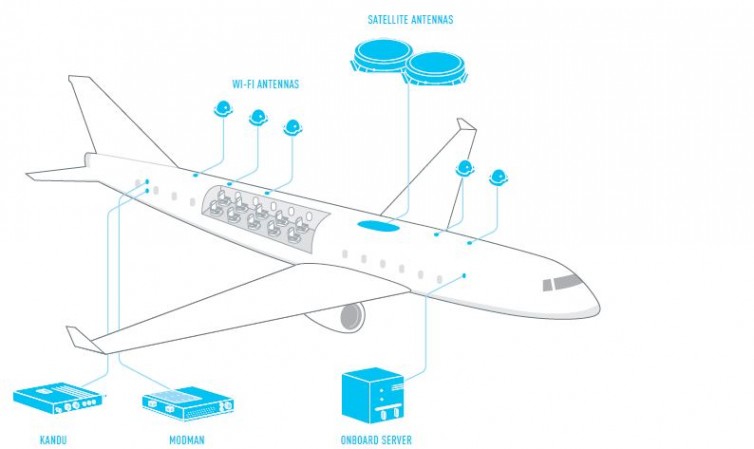 Inflight internet is here to stay, and carriers are working as fast as they can to equip their fleets, if only to keep pace with competitors. There are a few technologies available out there, with a lot a techy goings-on that I’m not qualified to explain, nor am IÂ going to pretend to understand. However for a good primer, check out the piece by fellow attendee Derek Kessler from Android Central, “Gogo’s new 2Ku inflight Wi-Fi brings broadband speeds to the skies.” 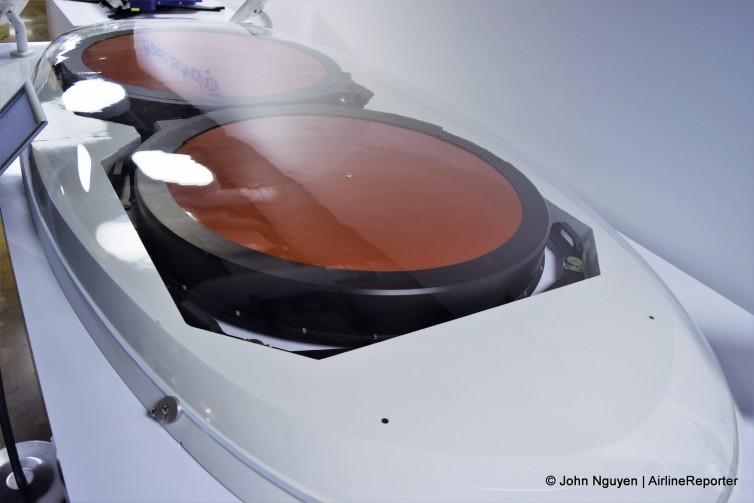 For the regular passenger, Gogo hopes they have the forward leap in technology that everyone’s been waiting for. Fast speeds, reliable connections, and adequate capacity for all users are the goals for their 2Ku system. Passengers would be able to stream content from providers like Netflix or HBO Go, live broadcasts via Gogo’s TV service, even voice calls if the customer (the airline) decides to allow it.

For Gogo, theirÂ actual customers are the airlines themselves. SoÂ beyond the passenger experience, Gogo wants to be a “holistic” provider of all signalsÂ broadcastÂ between aircraft and ground (via satellite). This includes cabin crew services (such as credit card purchases, connecting gate information, and live medical guidance during emergencies) and avionics (such as system diagnostics, real-time flight updates and tracking, and performance data).

Even seemingly minorÂ things, like aerodynamics come into play, as 2Ku uses two flat disc-shaped antennas instead of the single antenna that had to be physically pointed at the satellites (or “gimballed,” as my engineer father pointed out). This means the bump that you see on top of the airplane (“radome”) doesn’t have to be as tall, and thus causes 1-2% less drag and increases fuel efficiency – a metric the airlines obsess over. 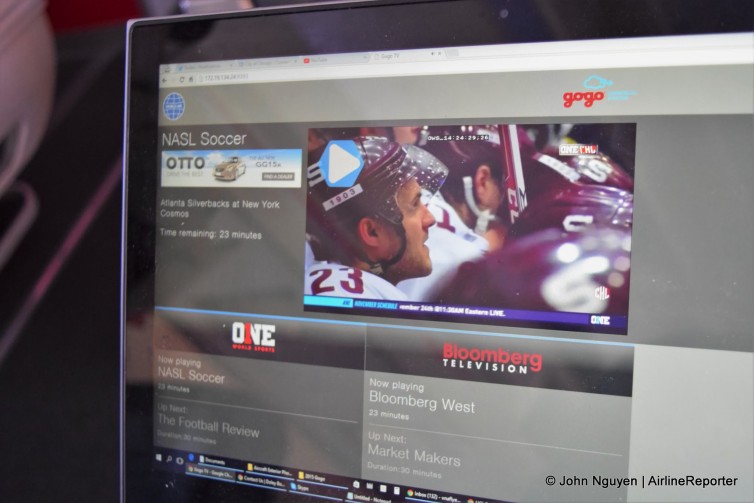 During our demoÂ flight, we had about 20 people with multiple devices all accessing the system at the same time. I decided to open eight windows of Youtube videos at 1080p, on top of streaming a live hockey game on Gogo’s TV service – all played without a hitch with nary a lag.Â For contrast, duringÂ my flight from Chicago to Dallas using older ATG-4 equipment, the download rate bogged down until it was rendered completely useless… and I was just trying to pull up the main Google page.

I was certainly impressed by 2Ku, but strangely I was also not completely satisfiedÂ -Â a feeling shared by many of my fellow writers. I actually chalk it up to a bit of overhyping by the Gogo crew, who without a doubt were sincere and proud of their technology, but in their enthusiasm may have oversold the performance a little bit; we were expecting even faster speeds. The fastest anyone on my flight reached was about 18Mbps, and that was while on the ground; most were in the 5-6Mbps range while inflight. For comparison, an average Starbucks has download speeds of 9.01Mbps, the fastest of any public Wi-Fi in the U.S.; AT&T and Verizon offers 4G data speeds of around 6.5Mbps.

I will be the first to admit that this is as #FirstWorldProblems as it gets, and with Gogo’s passion and motivationÂ to connect air-to-ground with blazing-fast speeds I’m fairly confident they’ll work out any kinks. 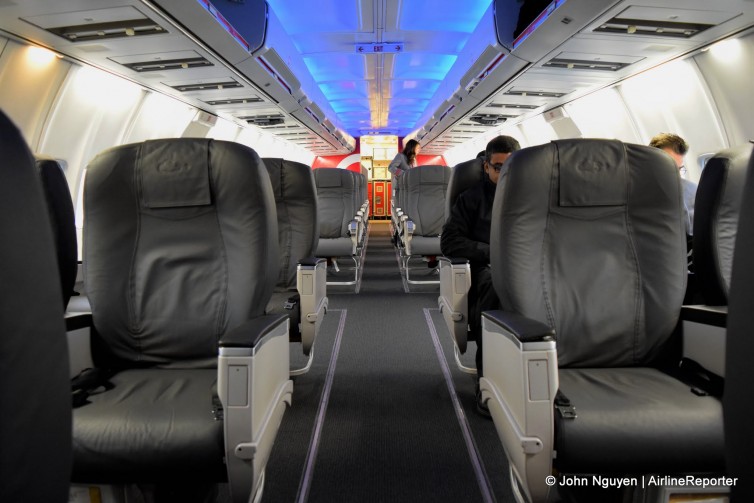 It’s worth mentioning that upload speeds were a dismal 1.0Mbps, with an atrocious latency approaching 1,000ms and beyond; hardcore Periscopers and gamers need not apply, and you can forget about uploading your vacation videos ontoÂ Youtube.

So when does the flying public get to experience inflight broadband speeds? Gogo indicated that eight airlines had signed up to offer 2Ku to their passengers. As it happens, the day after our demo flight, Gogo received its Supplemental Type Certificate from the FAA, allowing Gogo toÂ launch 2Ku forÂ commercial use. The first aircraft to offer 2Ku service will beÂ an Aeromexico 737-800 that should be equipped before the end of 2015. In the US, Delta also announced that it will install 2Ku on 250 of its aircraft, beginning in 2016. 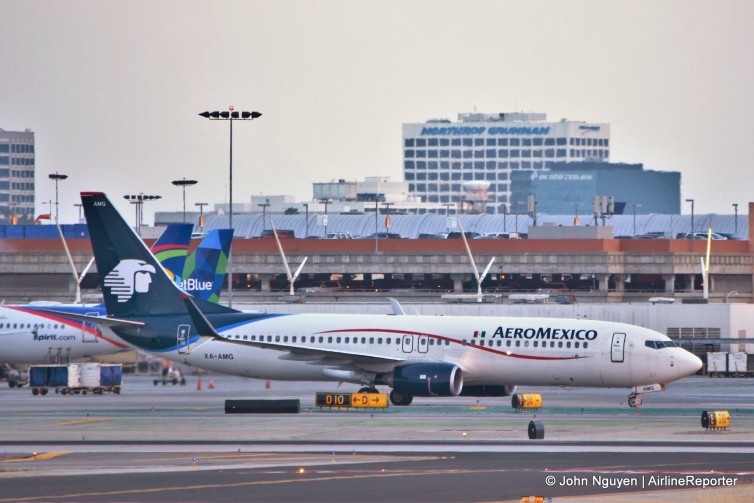 I asked a Gogo rep whether there were plans to offer retrofit kits for aircraft that already have older equipment installed, and the reply was not promising. Most airlines already invested heavily to install the then-current technology (a New York Times article estimated the cost to be up to $100,000 per plane) and aren’t keen to rip out the old hardware to install newer but more expensive stuff, especially when a plane is on the tail-end of its expected useful life.

So in other words, I should be happy the American Airlines MD-80 I flew on the Chicago-Dallas route even had a Wi-Fi signal; AA can only hope to recoop the installation costs before the old bird gets put out to pasture. Â Having 2Ku on my next flight is definitely a mouth-watering prospect, but it will take several years of fleet additions and refurbishments until blazing high-speed inflight internet becomes a common occurrence.

Oh yea… flying on Gogo’s 737-500 “Jimmy Ray” was a pretty awesome experience… more on that in a future story!

Note: Travel wasÂ provided for by Gogo, but all thoughts and opinions are my own.

http://VNAFlyer.blogspot.com
Photo Tour of the Bombardier CSeries at the Dubai Airshow
To the MAX! TheÂ Boeing 737 MAX That Is…
3 Comments

70Mbps is not a whole lot for a full flight. Assuming that around 50-80 people opt for it on a 777, it will translate to around 1Mbps per user. Granted traffic is likely to be bursty and not everyone uses their entire bandwidth every second, but if you are streaming video (which I think most people will), then the traffic will be a lot more steady, and the speed grossly insufficient. Perhaps they are better off offering this as a perk in first class or business class: fewer users and a better user experience overall. Also, free wifi makes for great marketing.

I had the same thoughts while going through it; in prodding one of the product managers, he stated that in real-world testing of offering free access vs. paid, while many passengers naturally signed on if access was free, charging even $1 dropped the active users down by 85-90%. Keeping the bandwidth clear is also why inflight access is so expensive right now; it allows those very few people willing to pay a premium to have an effective connection. I believe the pay model will remain, but I do think prices will eventually drop a little bit, once a critical mass has been reached.

John,
That is an interesting statistic. It does make more sense now. Thanks for the clarification.