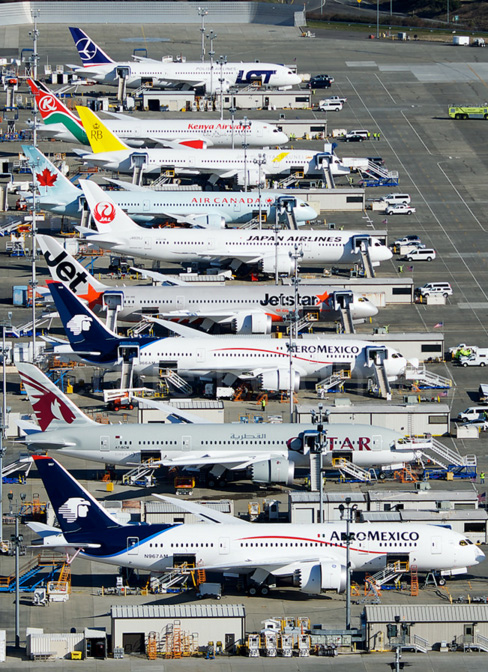 Paine Field (KPAE) is located about 30 miles north of Seattle. Many think it belongs to Boeing, but it is actually owned by Snohomish County. Boeing still has a huge presence — this is where they build the 747, 767, 777, and most 787s.

The airport also has private aircraft and is home to facilities like the Future of Flight, Flying Heritage Collection, the Historic Flight Foundation, and more. 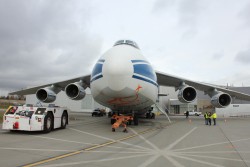 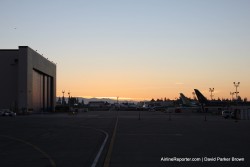 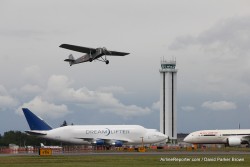 “Our mission is to contribute to the economic vitality and quality of life of the region,” Arif R. Ghouse, Paine Field Airport Director stated online. “We do this by providing high-quality aviation and industrial services, facilities, and interaction with our customers. Our customers are the airfield tenants and users, our neighbors, the people of Snohomish County, and the worldwide aviation community.”

It is estimated that the airport’s impact is around 76,000 jobs and an output of more than $30 billion annually. This sort of presence needs a strong and talented fire department — and they surely have that. 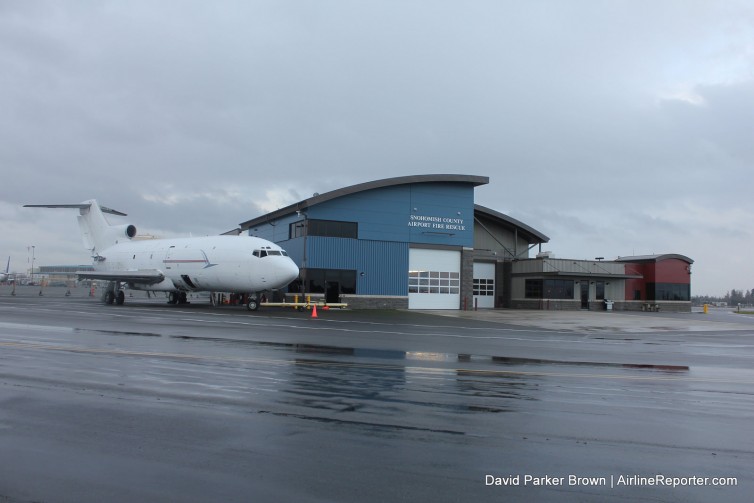 The 727 trainer next to the station

Once I arrived at the fire station, I had the chance to sit down with Fire Chief Jeff Bohnet. He was personable, professional, and excited to show me around.

Because Boeing has such major operations at the airport and almost are their own city, they also have their own fire department. It is the Paine Field Fire Department’s job to mostly handle activity on the airport’s property — their primary focus is what happens on the runway. Their department mostly deals “high risk, low frequency” calls.

They also work closely with Boeing’s department and even the surrounding towns of Everett and Mukilteo to provide additional back-up. They will do “hot drills” with surrounding departments to better learn how to work together for a potential disaster. Then every three years, a larger drill is conducted involving 50 “injured” passengers (actors). 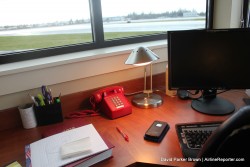 The red phone to the tower 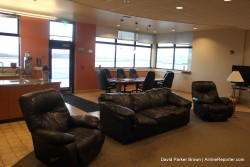 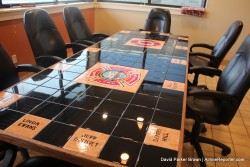 Table made to remember previous firefighters

The station, which is 14,000 square feet in size, is a great source of pride for the firefighters. Quite a bit of effort was taken to let the employees have a say with the layout and functionality of the facility.

The station was built with a 50-year lifespan, and was a huge improvement to the old building that previously played the role. With multiple bedrooms, a full kitchen, and living room, the place is set for those on duty to be ready for an incident. 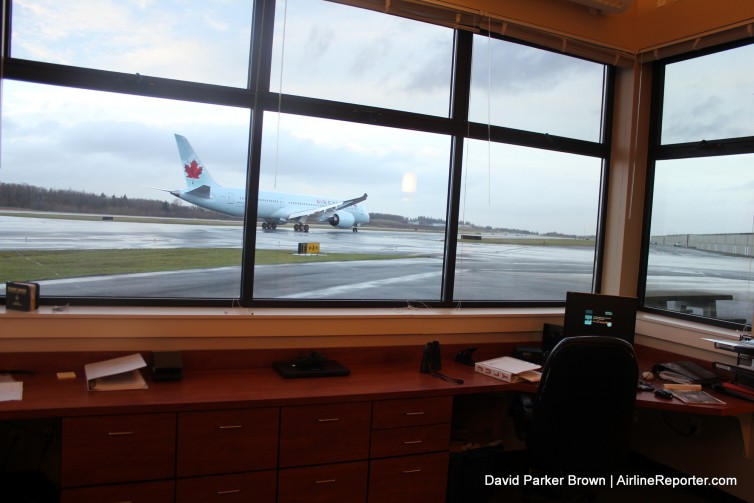 An Air Canada 787 out the window

My favorite room was the Captain’s office. It is the control central for the station, with a red phone (connected to the tower for emergency calls) and, of course, big windows overlooking the airport. My tour of the room had concluded and we were on our way out when I spotted an Air Canada 787 Dreamliner taxiing; I had to excuse myself to go back and take a few photos. It was quite the view for sure!

We continued the tour into the garage and started looking at the fire vehicles when a call came through the speakers. There was a hydraulic liquid spill reported on the other side of the airport. I stepped back and watched as two firefighters suited up and took off. It was pretty cool watching them do their thing and speed off, but I was a bit disappointed that we were left with a mostly empty garage.  That’s okay; Chief Bohnet suggested we head over to the maintenance facility until they returned. 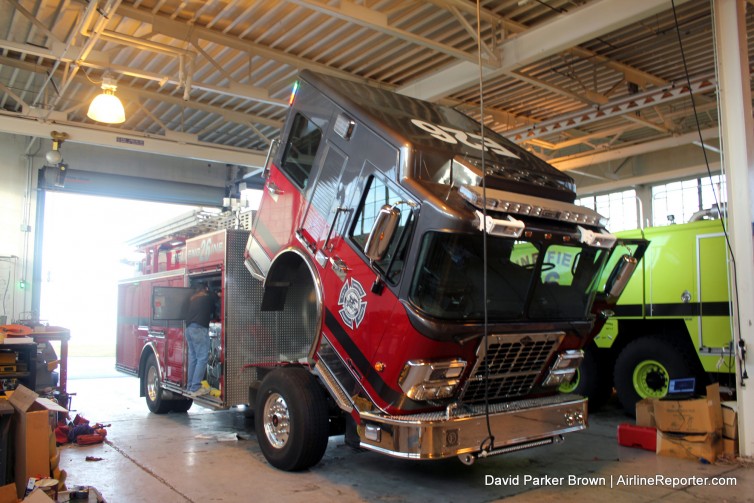 We loaded up into the department’s fire-engine-red (duh) Ford Expedition and drove to the maintenance facility, a ways from the main station. Not only does the Paine Field Fire Department handle their own maintenance, but they also work on other vehicles.

When you look at a fire truck, you might just see red, but not realize the amount of pride and detail that can go into a design. I am one of those that always notice the little differences with liveries (airplanes or otherwise). 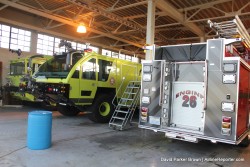 One of the new engines 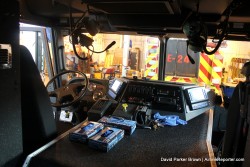 Inside the cab of the fire engine 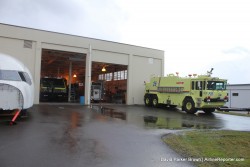 Older engine and trainer outside

The passion became clear as Chief Bohnet talked about his inspiration, ideas, and how he worked with his team to come up with a consensus. From coloring, reflectors, smoked-out turn signals, to even making their emblem in gray-scale to match the design — it was impressive. I think they did a great job — one of the best I have seen — and should be proud!

Unfortunately, because of federal requirements due to funding, the Panthers (more on them soon) have to be painted the “airport” lime-green. Sure makes them easy to see on the field, but they just aren’t the same — call me an old timer, but a real fire engine is supposed to be red! 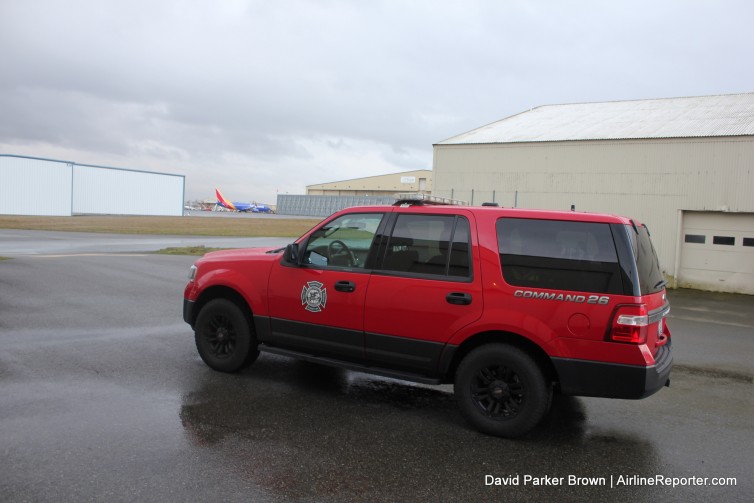 Our super sweet Expedition we drove around in

There is a Snohomish County Sheriff officer that patrols the airport, but KPAE’s Fire and Operations personnel also play a key role in keeping the airport secure ’“ a team effort.

During my visit, we ended up having the opportunity to play police as well. While Chief Bohnet and I were driving back to the station, there was a report of a black truck driving in a restricted area of the airport.

He said he was on it and we headed out to try and find the guy. At first we didn’t see him, but as we exited the airport property and onto the outside road, we saw a truck that matched the description and went into pursuit. Well… kind of. 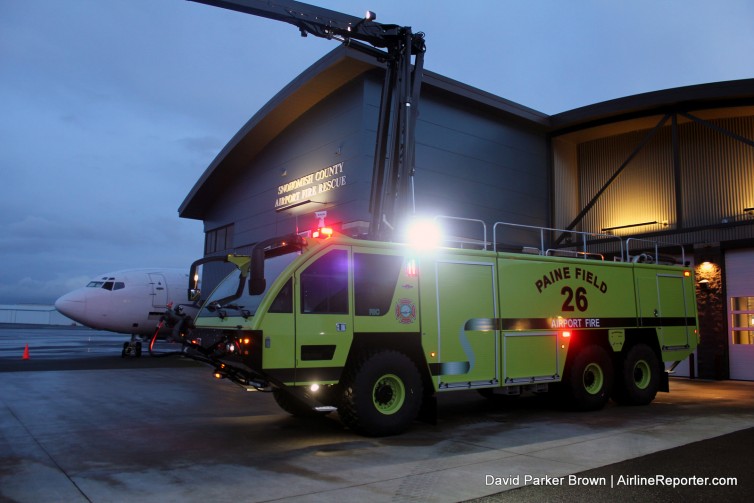 Lights and sirens — ready to go. It is actually quite hard to get a good photo of LED lights

No lights or sirens and traffic was going like 3 mph, but it still felt legit. We ended up losing the guy and really we didn’t have the authority to pull him over anyhow. We could just nicely ask him to pull over to chat. Yes, I still had the COPS theme song in my head.

When we returned to the station, we ended up seeing the black truck drive by. Chief Bohnet went into action, while I continued my tour (I had fire trucks to learn about). Turned out to be an honest mistake and the guy in the black truck learned a good lesson. 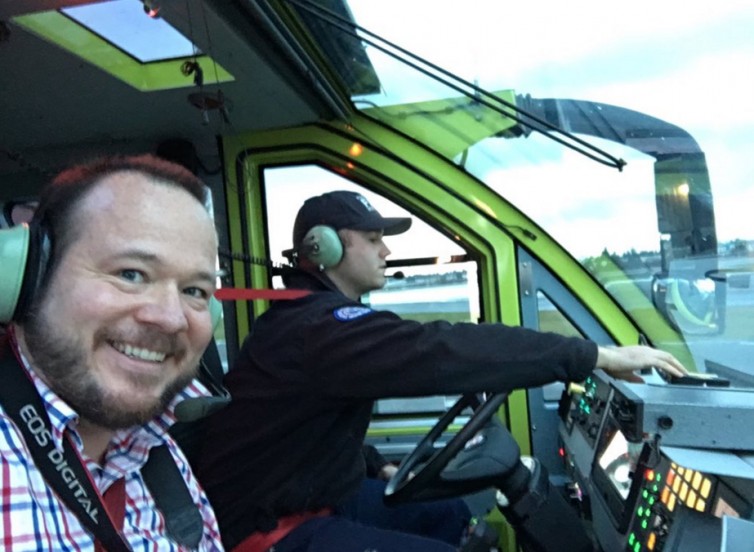 Okay, okay… the other stuff was pretty darn cool, but then it was time to play with the Panther! This bad boy is a Rosenbauer Panther Airport Rescue Fire Fighter (or ARFF – which is ironic with its “cat” name). The department has two which were delivered during the second half of 2015.

The one I rode on sports 3000 gallons of water, about 400 gallons of foam, and a 460lb Halotron ball. The Halotron allows a fire to be put out in a plane, without destroying all the valuable (and important) electrical devices on board. Cool stuff.

Then it was time. I got to saddle up in the Panther and it felt more like a space ship than fire truck. So many buttons, lights, switches, and two sweet looking joy sticks. I wanted to play with everything, but was afraid to touch anything. I behaved. 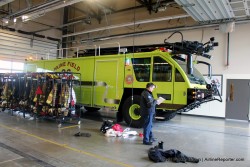 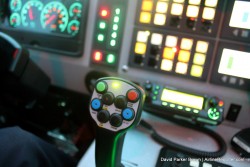 Joy stick that controls much of the operation 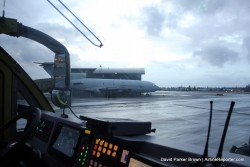 This is not your granddaddy’s fire truck. The Panther allows fire personal to quickly and safely handle a number of different situations. They don’t need to get out of the truck, hook up hoses, and manually fight a fire. They are able to do almost all operations sitting in the cab. 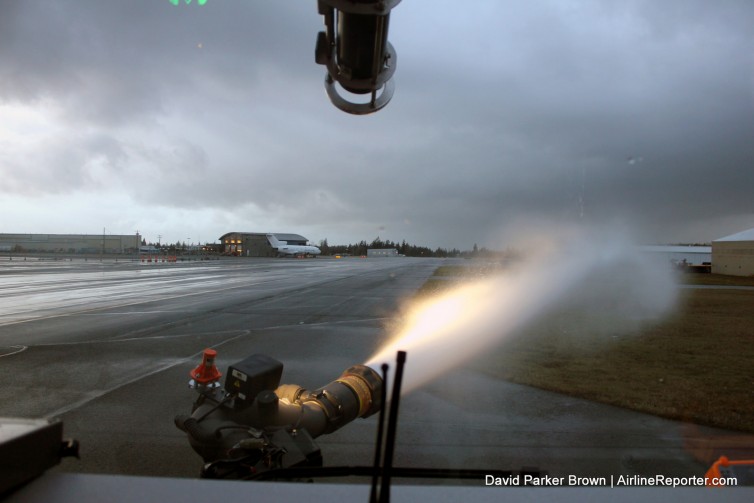 After a short lesson, I was asked if I wanted to shoot some water out of the front hose. Oh heck yes! I grabbed the joystick, aimed the cannon, pulled the trigger, and water shot out from the lower cannon. I could very easily move it in almost any direction. I did a great job watering the grass — you are welcome, Paine Field! 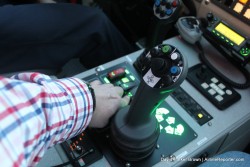 Controlling the boom and stinger 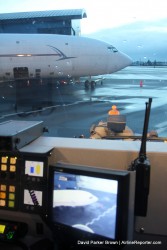 Infrared to better see the fire’s location and passengers 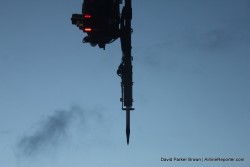 Then we headed over the 727 trainer to see how the STINGER works. This is sort of a harpoon that will shoot into the cabin of the plane and spray water. It is quicker and safer than firefighters needing to go inside the cabin. Armed with night-vision and infrared cameras, it makes it easier to locate the fire inside the cabin and any possible survivors. It was impressive seeing how it could punch through the fuselage of the 727 and spray water directly into the cabin. 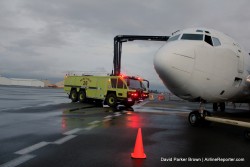 Practicing on the 727 at Paine Field 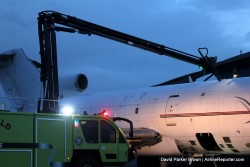 Putting the stinger into the 727

What an awesome experience and what a great group of people. Yea, it was fun, I had a great time, but this is serious business. If an airliner was to divert to Paine Field due to an emergency, this crew needs to be ready to respond. They are prepared, but hopefully they do not have to put all their training into action too often.

Boy, it sure seems like a lot of old 727’s end up being used as practice for airport fire departments. I used to work for Boeing’s 727 group as an aeronautical engineer and it’s kind of sad to see one of them getting stabbed with that nasty looking stinger. On the other hand, the 727 was one of the most useful airplanes ever created and even as Earth-bound aluminum T-tail tubes they are still working hard for the aviation community!

Yea, for sure can be hard. But I think, as you said, better to be still around vs torn apart and now recycled!

They work hard potentially saving lives in the event of a massive emergency!

The matter, the text and the pictures were very intertwined. congratulations!

That is always the magical combo 🙂

This story brings back fond memories of my son and I visit and tour of this fire station in 2010. Great story David. Thanks.

Great story and pix, David. They are an impressive group and yup, they have some seriously impressive Big Boy’s toys. That said, let’s hope that the Red Phone does not ring more often than the daily test call.

Addendum: David, at about twice your age, I don’t have to invoke a second childhood to admire some of the world finest fire fighting vehicles. I like them and I make no bones about it. I much prefer to them in a static state or a training drill, but feel secure in knowing that they can do the real job, if and when called upon. They are very impressive machines – and also extremely expensive!