Practice makes perfect. And in the realm of aviation safety drills, it also creates incredible experiences for willing volunteers. Kansas City International Airport (MCI, or KCI as it’s referred to by the locals) recently hosted their triennial emergency exercise, and I was fortunate enough to score a role as a victim. I was told this was a full-scale drill from the beginning, but wasn’t sure exactly what to expect.

The closest I’ve ever been to anything remotely resembling an emergency was on my very first Airbus A320 flight just a few years ago from Minneapolis (MSP) to Pittsburgh (PIT). It was late, and after a typical approach the engines roared and we were on steep climb. Upon leveling off, the Delta captain came on to tell us we had briefly “lost steering.” After a missed approach and a fly-by, we landed uneventfully, were greeted by an ARFF (aircraft rescue and firefighting) escort, and towed to the gate. This experience, plus participating in some rudimentary safety training with Delta during last year’s #InsideDelta event, formed the foundation for my expectations.

I would soon learn I had no idea how disasters really play out, especially on the ground’¦ 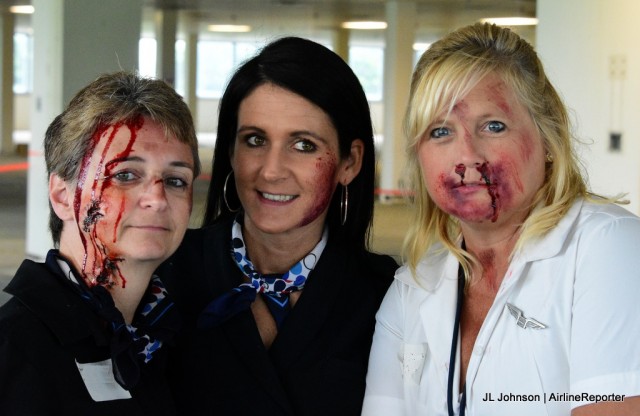 Our KC-based (real-life) flight crew. The FA on the left was “dead heading” – she chose the wrong flight!

I was told to arrive early, as only a small percentage of “victims” would receive moulage. Apparently everyone else had received the same message, as I’d arrived ahead of schedule to a room full of wounded and long lines for the moulage artists. If you’re a fan of The Walking Dead, you’ll understand me when I say it was like being on the show’s set, albeit with no necrotic tissue.

BONUS: Parts to Planes: The Story of Jet Midwest and a Shuttered American Airlines MRO

Thanks to many of my fellow passengers already walking around sporting their shockingly realistic, messy, and sticky wounds I elected on only minor injuries. I would be carrying my camera bag for the day, after all. A black eye, abrasions, and minor burns landed me in what, for medical triage purposes, was called the “green” group: the “walking wounded.” The remaining passengers were divided between the “yellow” group: serious- non-life threatening, and “red” group: immediate, life threatening injury. There would be no passengers in the “black” group, which was destined for the morgue. 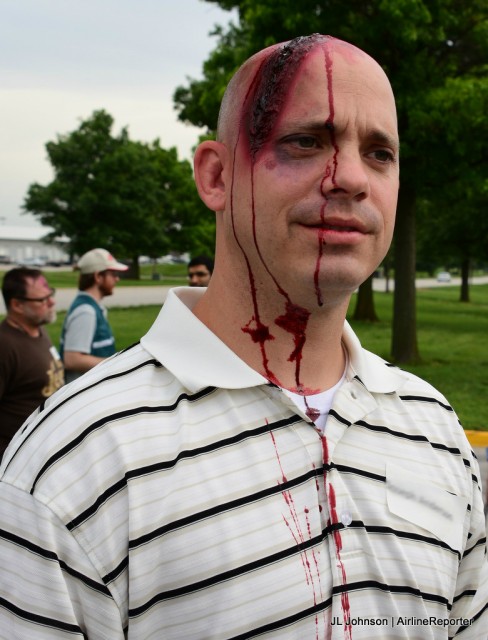 This is Joe. He was my favorite victim. Amazingly, he survived his injuries. More of him in a bit.

Once everyone had received their wounds, special assignments, and a light breakfast courtesy of the Red Cross, we were bused onto the Airport Operations Area (AOA) and to the end of a runway. When we arrived, it was clear that the airport had been busy. “Colin,” the 727 FedEx donated to the airport for this very purpose, had been towed out and a large amount of debris, courtesy of an overhaul base tenant, littered the runway. 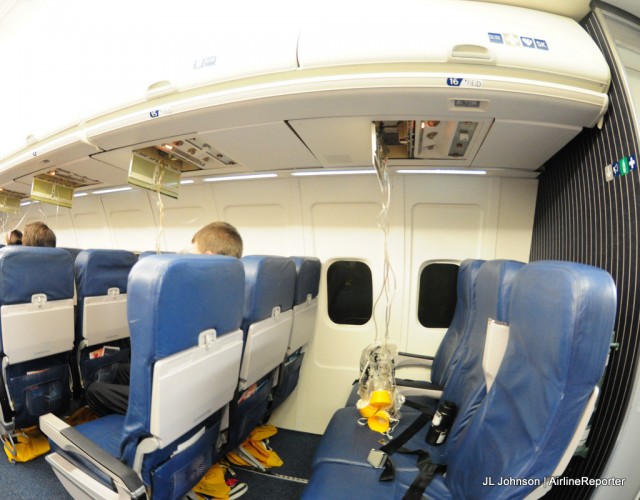 The view inside Delta’s training cabin, in Atlanta, after the oxygen masks are deployed.

Because Colin the 727 had ended its life as a cargo plane, there were no seats, and there could be no evacuation. Fine by me; I learned at Delta, during a different trip, that minor evacuation-related injuries are quite common. 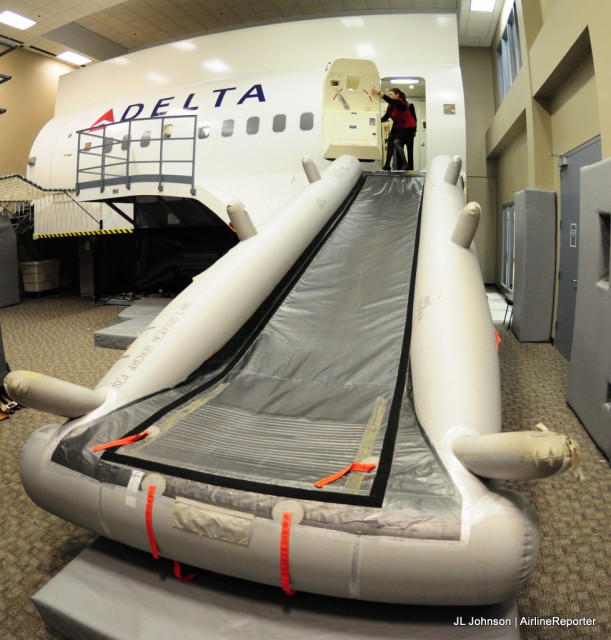 Delta’s evacuation trainer, in Atlanta, a piece of equipment all flight attendants are very familiar with.

Instead, the simulation would begin post-evacuation with passengers strewn about the debris field. As we all took position we were kept apprised via announcer on megaphone. An emergency had been declared, the crash phone pulled, and first responders alerted that our plane was just a few minutes out. ARFF, ambulances, mutual aid units from nearby agencies, and other equipment staged mid-runway awaiting our impending crash. 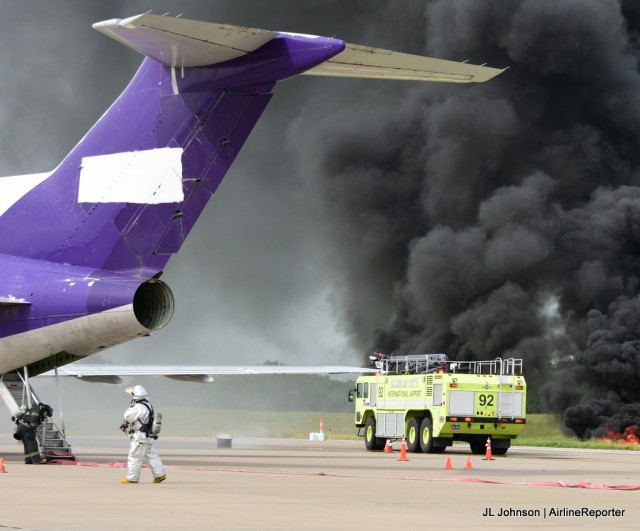 A few minutes later, there was a loud explosion and a number of old tires were ignited spewing thick, black smoke. At that very moment, a Southwest flight took off from the parallel runway. I can only imagine what a spectacle this must have been for those on the port side of the plane.

The explosion had marked the official start of the simulation. Just seconds later, the roar of sirens and large diesel engines drove up the runway weaving between various bits of cargo and random plane parts along the way. Meanwhile, our two flight attendants, a few good Samaritans, and our off-duty deadhead moved from passenger to passenger doing their best to assist where possible, offering reassurances that help was on the way, instructing those with broken bones to stay still, etc. 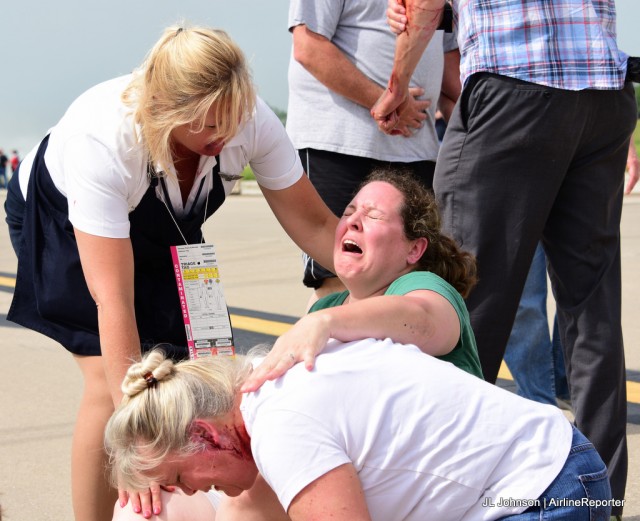 Embedded in the victim pool were actors given special instruction, some more animated than others.

What happened in the next 20 minutes or so was pure organized chaos and tough to explain. Simply put, everyone had a job to do and, as best I can tell, they did it with confidence and efficiency. The airport’s ARFF teams quickly extinguished the fires while medical crews assessed injuries and distributed triage tags.

I was approached by an EMT and asked if I had had knowledge of sustaining any serious injuries. I told him I was fine, and after correctly answering where I was and what had happened I was classified as “a green” to receive treatment later. During my brief interview and examination, three large colored tarps had been laid, one green, one yellow, and one red. I was instructed to move to the green tarp and await further instruction. 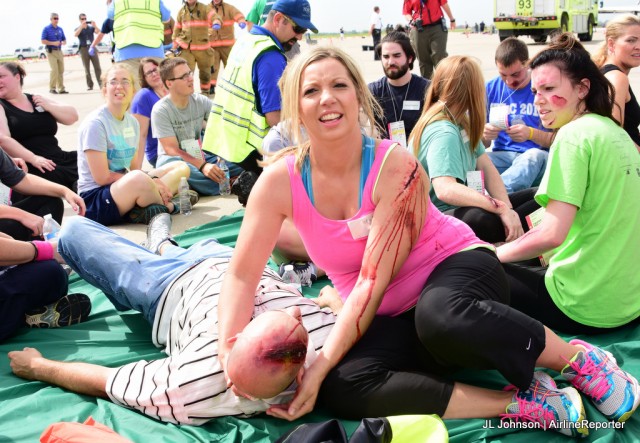 This couple made it out alive, but they’ll have nasty scars

There seemed to be a bit of confusion over the tarp system and this obvious yellow or red injury had found his way to the green tarp. I’m unsure if this was by design (some of us were given special instruction to introduce unexpected variations) but the EMTs quickly noticed him as an outlier and carted him out on a stretcher, to an ambulance and the mock hospital. 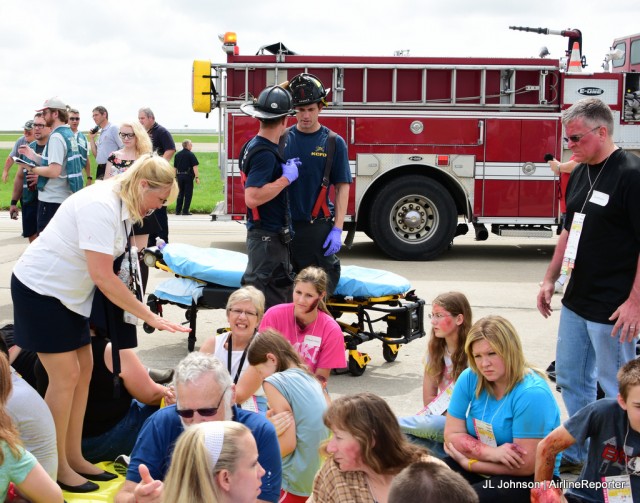 It wasn’t long before the steady rotation of ambulances had cleared the yellow and red injuries. Those of us left received treatment for our minor injuries and ultimately rode the bus to the airport’s CBP-operated international arrivals holding area while better accommodations could be prepared. EMTs remained present to assist with any lingering injuries. 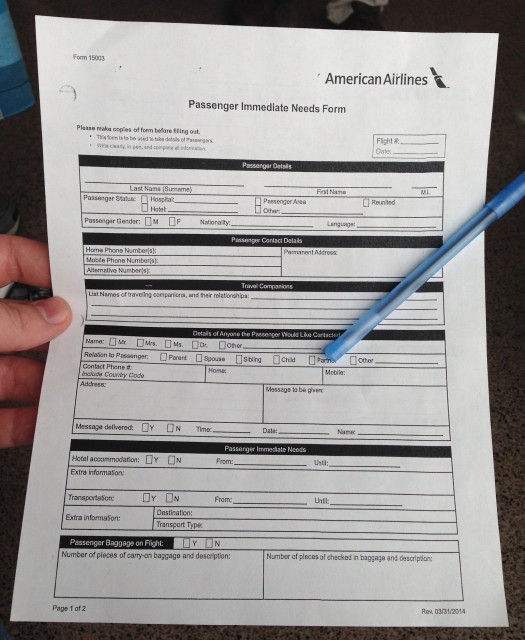 No event is complete without paperwork! Photo: JL Johnson | AirlineReporter

Airline representatives distributed water, snacks, and amazingly, paperwork. At the time, the paperwork piece seemed a bit of a stretch and honestly out of place given the day’s events. I can’t imagine a true survivor would have had the mental capability or patience to fill out a form, but here it was none-the-less. Mocking aside, the purpose of the forms is one of real importance, allowing passengers to request various arrangements, notify family, and essentially finalize the experience. 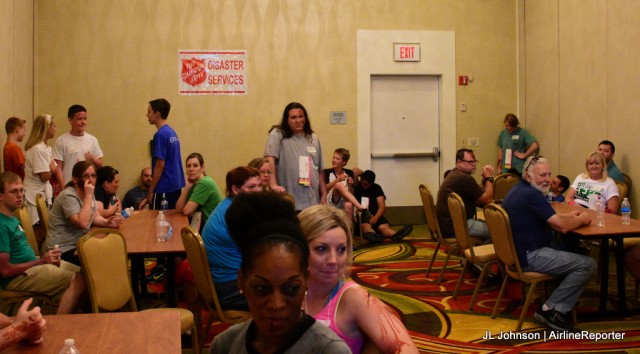 Our final trip was one via bus to a nearby airport hotel. A crisis center had been setup by the Salvation Army and other community organizations to provide accommodations, trauma counseling, and a venue for reuniting with fellow passengers, family, and friends.

The exercise lasted roughly five hours end-to-end and was quite involved. Even though this was just a drill, there were times (especially on the AOA) that it seemed very real. Through my experiences I found a respect for those involved in drafting and choreographing these drills. I learned a great deal -knowledge that I hope to never have to put to use.

The airport seemed satisfied with the drill as well:

’œThe KCI Emergency Exercise gives us the opportunity to work risk-free with all of the mutual aid organizations who would respond if we had a major incident at the airport,’ said Joe McBride, manager of marketing and communications for the Kansas City Aviation Department. ’œWe are able to establish relationships and confirm communications channels are all on the right frequency!’

I’m told the FAA requires drills of this nature every three years for most airports. Having “survived” one myself and witnessed first-hand the cross-organizational coordination, I’m really quite pleased with how it all played out. I’m confident should there ever be a real event at KCI, it will be one well cared for.

Thanks for having us, Bob!

Wow, what an experience! I’m surprised it was so extensive. (i.e. bussing you to an off-site location after the airport triage was over) It’s reassuring that they’re so well prepared, though.

I too was surprised. They really went all out. I’ve read similar stories elsewhere and got the impression it wasn’t as comprehensive. The moulage wasn’t as impressive as KC’s either 😉

I kept having to remind myself that this wasn’t just an airport/ARFF thing but multi-agency. It was crazy (in a good way) to see KCFD, and other cities respond, plus Red Cross and Salvation Army. Truly an “all hands” event!