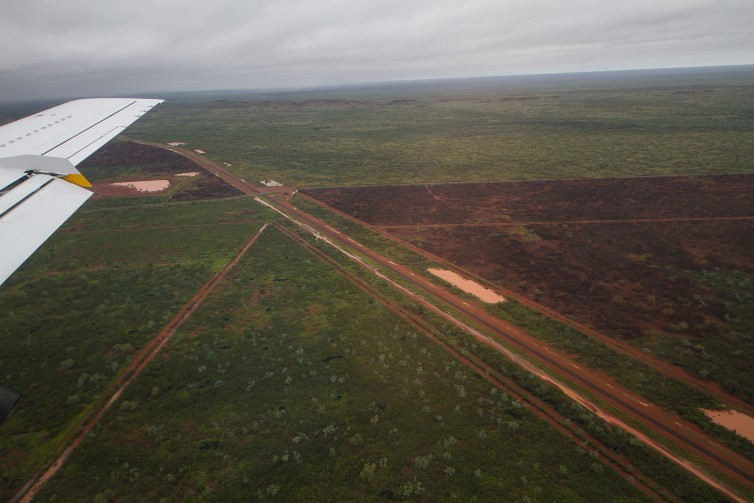 Remote communities such as Tennant Creek depend heavily upon essential air services such as Airnorths “Centre run” Despite it’s age, the cabin has been maintained in excellent condition – Photo: Jacob Pfleger | AirlineReporter

As I was not able to check-in online for my flights, I had to make do with the check-in at a counter with a real person – an almost archaic practice. This actually turned out to be quite an amusing experience, as the agent first thought I had made a mistake with my booking since it showed me returning to Darwin on the same day. After check-in and security formalities, it was time to board the Brasilia. 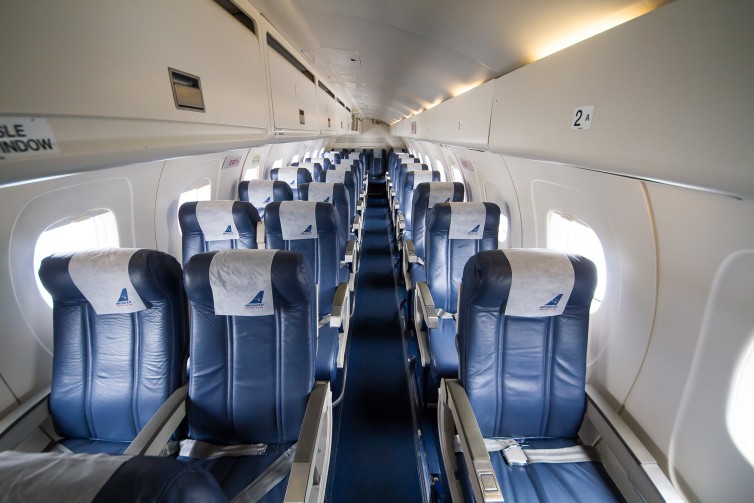 Despite it’s age, the cabin has been maintained in excellent condition – Photo: Jacob Pfleger | AirlineReporter

I have always liked the look of this aircraft – there is just something so cool about the polished metal engine cowlings. It brings back memories of the glory days of flying. Today’s aircraft, VH-ANT, undertook its first flight in 1989. One would think that the years would clearly be showing on the plane, however the only indications of its age were the older style overhead lockers in the cabin. Unfortunately they were too small to fit my camera bag so I had to make do with under-seat storage. 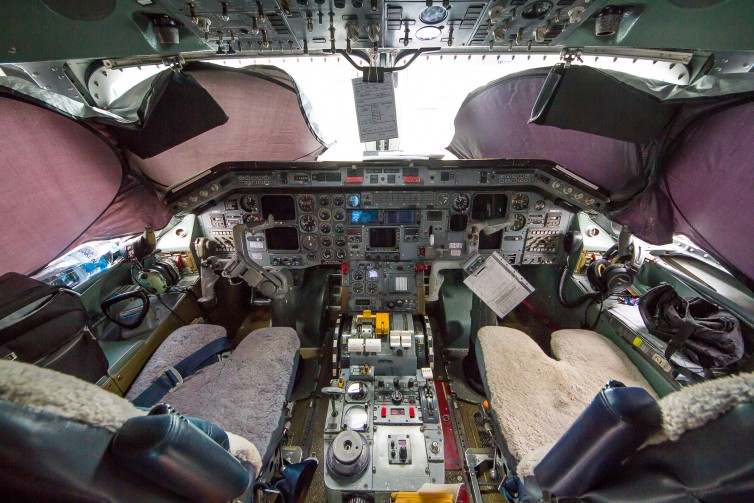 The business end of the “Braz” – Photo: Jacob Pfleger | AirlineReporter

There were a total of 22 passengers booked on the first segment from Darwin to Katherine. Following a spectacular dawn departure with a great view of Darwin, the inflight service commenced. Given my previous positive experience with inflight service on Airnorth, I had very high expectations. I was not disappointed. Not only were we served a snack box consisting of a ham & cheese croissant, but we were also provided with a choice of hot and cold beverages. These were individually ordered and delivered by the wonderful Adellyn, the sole flight attendant on board. What makes this more impressive, is that the flight time to Katherine was just over 30-minutes. 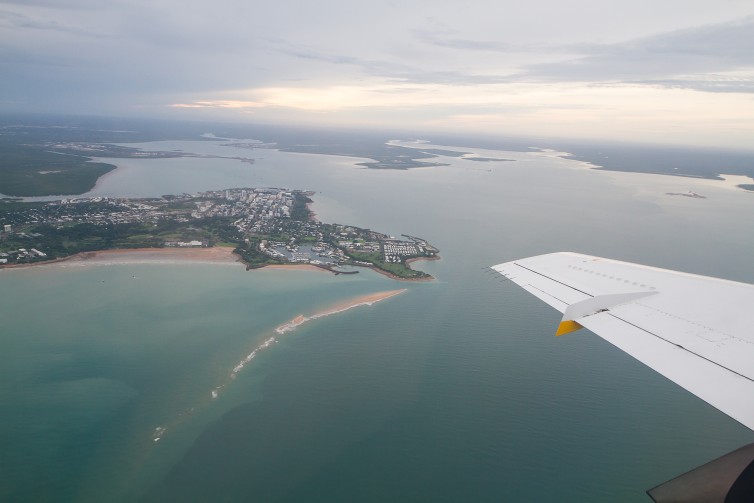 A great view of the city on departure from Darwin – Photo: Jacob Pfleger | AirlineReporter

Following an on-time arrival into Katherine, the passengers continuing on to Tennant creek and Alice Springs were asked to remain on board. There were a total of nine passengers continuing on to Tennant Creek with none joining the plane in Katherine. This was the longest flight segment of the day, with a flight time of one hour and twenty minutes. This really gave me the chance to explore the Brasilia a bit more – I came to the conclusion that the best seats in the house are at the rear. Despite the significant fishtailing during landing, the rear section of the cabin is the quietest and has the least vibration. That is not to say the Brasilia is an overly noisy aircraft for a turbo-prop, but for someone spending the best part of eight hours in it, every decibel less is very much welcomed. 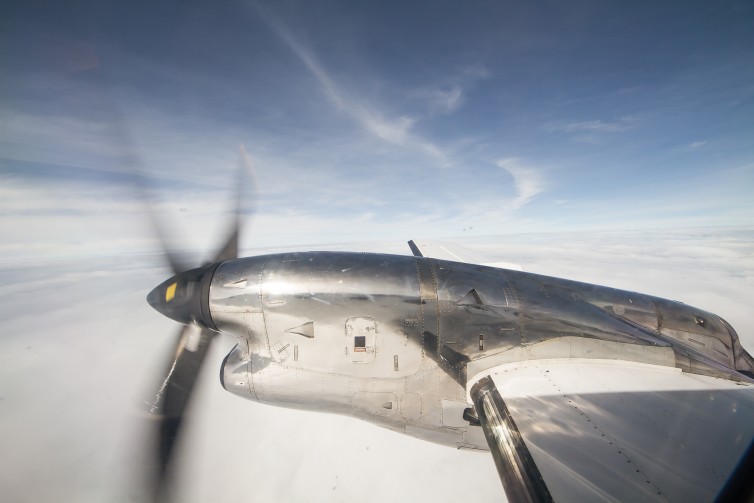 The trademark of the Brasilia – polished metal engine cowling. I wish more aircraft had this. – Photo: Jacob Pfleger | AirlineReporter

After another great service provided by Adellyn, we arrived into Tennant Creek, where all passengers were asked to disembark. At this point I realised I was the only passenger travelling all the way through to Alice Springs (it was the same for the return flight). I think the Tennant Creek airport is best summarised as an “outback charm” – it is a simple building and more than fulfils its purpose for the three weekly flights that pass through here. You know that it is a really small airport when the check-in agent, baggage handler, dispatcher and refueller are one and the same person. 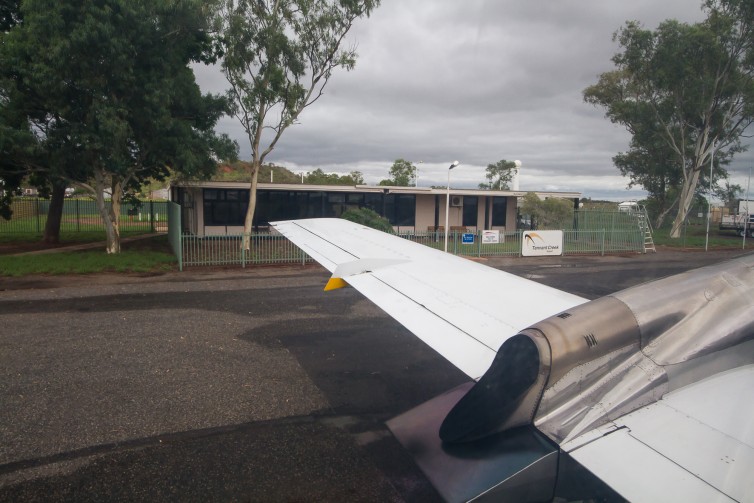 For the final leg to Alice Springs, we had a total of seven passengers on board. The flight time was 55 minutes, and we were once again served a snack box with a choice of drinks. I was originally planning on having lunch in Alice Springs, but given the amount of catering on the flights I decided to pass. It was a good call, as the airport cafe in Alice Springs is the most expensive I have ever come across – a steak sandwich and beer for over $30 Australian dollars is just daylight robbery. I understand the premium, given location and monopoly, but even then this is just ridiculous. 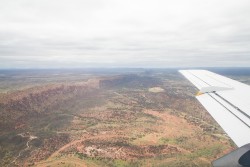 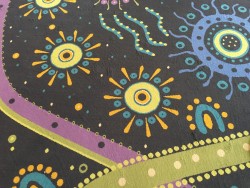 Following 90 minutes on the ground in Alice Springs, it was time to re-board for the return flight, again flying via Tennant Creek and Katherine. These flights were much the same as the outbound, not only in terms of the excellent service provided, but the passenger loads were also almost identical. The return flights were significantly more turbulent thanks to the typical afternoon thunderstorms, but yet again, the Brasilia handled all the elements very well. I even became used to the constant fishtailing. 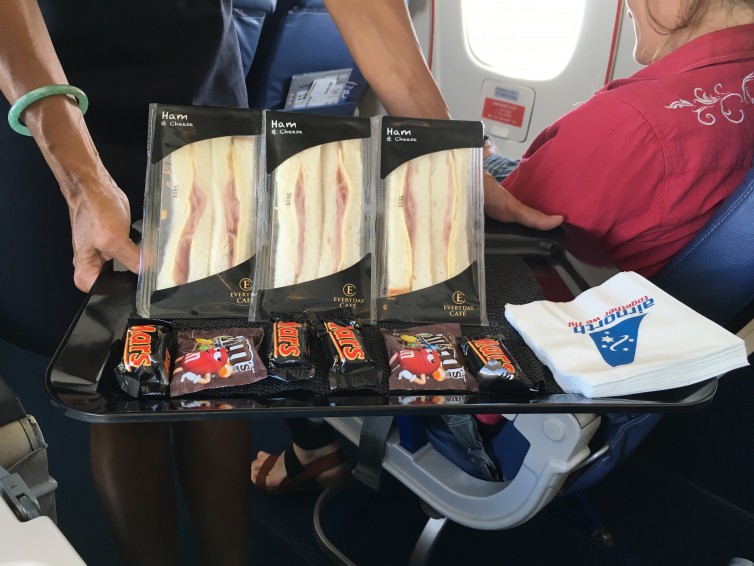 The in-flight service once again went above and beyond my expectations – Photo: Jacob Pfleger | AirlineReporter

Once again, Airnorth delivered a great product which went above and beyond my expectations – especially given that the service was operated by a smaller turboprop aircraft. The highlight of the trip for me was the constantly changing landscapes. The flight starts off with lush green bushland around Darwin, which gradually transitions to more dry and barren farming country interspersed with various interesting geographical features, such as dry salt lakes. Finally, it enters into the “Red Centre” landscape of Alice Springs which can best be thought of as an oasis in the desert. 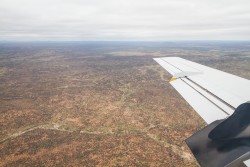 One of the highlights of the flight is the dramatic change in landscapes as you get closer to Alice Springs Photo: Jacob Pfleger | AirlineReporter 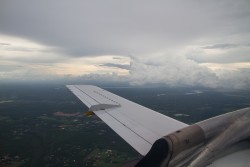 As with my previous flight, storm dodging is a way of life in the Top End Photo: Jacob Pfleger | AirlineReporter 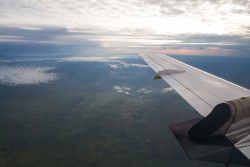 The landscape rapidly changes on the climb out of Darwin Photo: Jacob Pfleger | AirlineReporter

Unfortunately, given the current wet season in Northern Australia, the airborne views of the countryside were not what I was hoping for and there was a persistent layer of cloud for the majority of the trip. Even so, I greatly enjoyed my experience on-board, and I think it was a great way to, not only experience true remote area flying in central Australia, but also to do it on an aircraft type which is slowly disappearing from the skies.

https://www.airlinereporter.com
My Inner Seven-Year-Old Hangs Out with the Paine Field Fire Department
How Do You Get the Best Seat on Southwest Airlines?
2 Comments

Great writeup Jacob! Only makes me want to visit Australia even more.

I’ve been quite interested, for quite a number of years now, to get up there and sample Air North’s services, and of course, get a ride on the Braz!

This of course is now a little easier with their Wellcamp and Melbourne services. Hmmm….do I hop down to Melbourne, or jump up to Brissie?

I might have to take my wife up to Darwin for a relaxing week, mixed with a couple of “joy” flights.