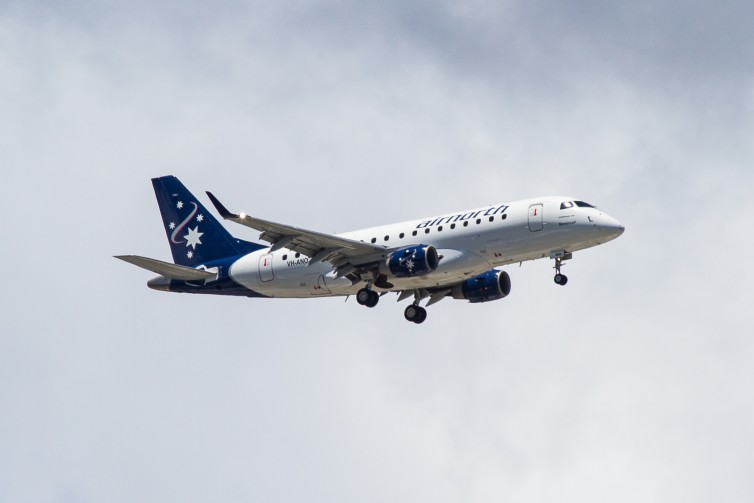 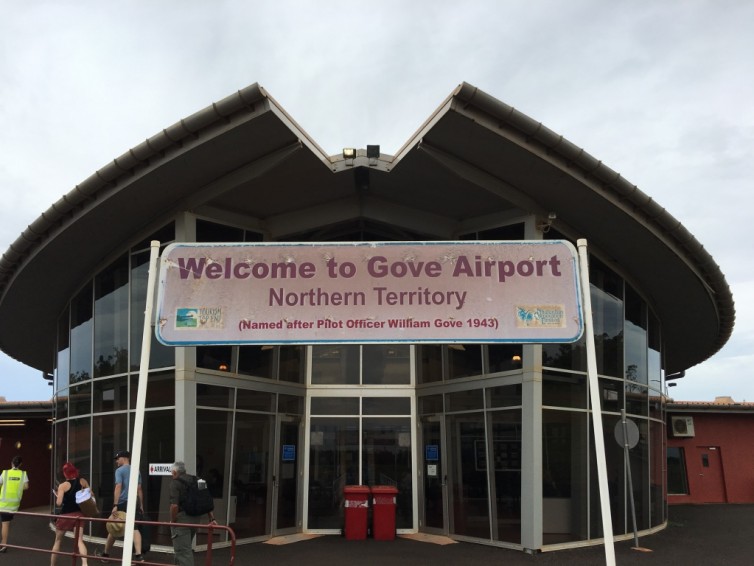 How many AvGeeks can say they’ve been to Gove? – Photo: Jacob Pfleger | AirlineReporter

At present, there is a lot of competition on the Cairns-Darwin route, with no fewer than three direct daily flights by airlines. Despite the obvious cost and time benefits of taking a direct flight, I really do prefer to fly regional airlines where possible, as I find that the product they deliver is more exclusive and individualized than others. The flight is operated by the Embraer E-170, which is configured with 76 seats in an all-economy-class, 2-2 layout. 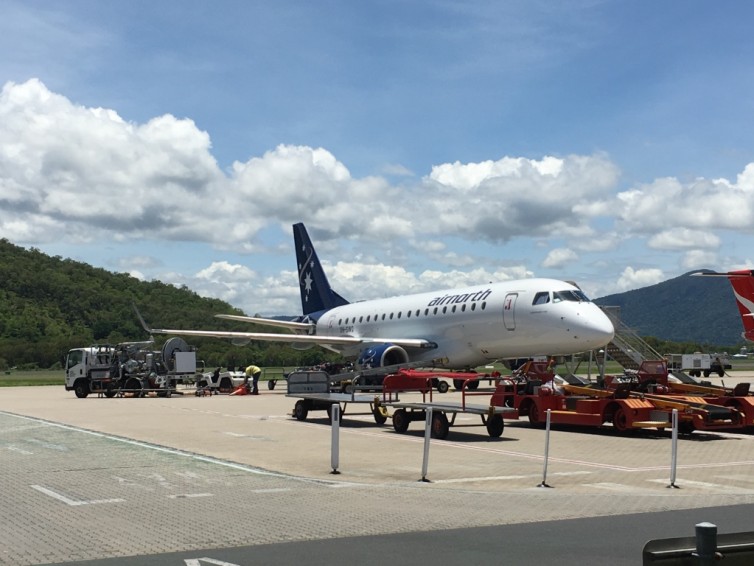 The Embraer E-170 never looks out of place on the ramp of a tropical airport – Photo: Jacob Pfleger | AirlineReporter

Airnorth offers its passengers online check-in on select routes, and I decided to give it a go. Upon getting to the seat selection page, the seat map showed that I had been allocated 14A – a window seat in the rear section of the aircraft. Unfortunately, when my boarding pass was issued, my seat had mysteriously changed to 6D, an aisle seat. Needless to say, I was slightly upset since I wanted the view, but there was no way to change my seat online after check-in had been completed. All my worries were unnecessary, however, as the lovely check-in agent in Cairns was able to change my seat without any issues to 1A — score! 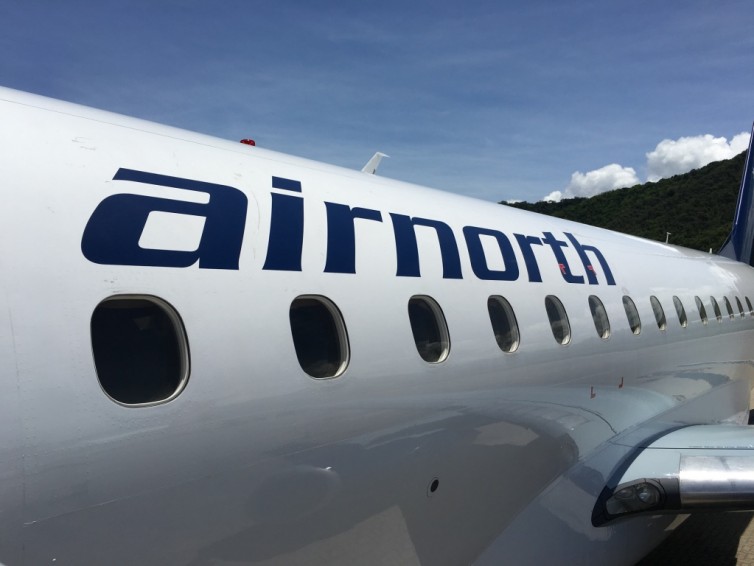 Cairns Airport has recently been voted the 13th-best small airport in the world, and it is not hard to see why – the layout is very modern and open. The only thing that I dislike about the domestic terminal is the lack of a decent ramp view; however, the walk to the aircraft more than made up for this. Having bulkhead seats on any aircraft is always a bit of a gamble in terms of how much legroom there will be. Thankfully, on Airnorth’s E-170, the legroom in the bulkhead row is very generous. I should also mention that the seat width is not restricted in any significant way, as is also all-too-often the case with bulkhead seats. 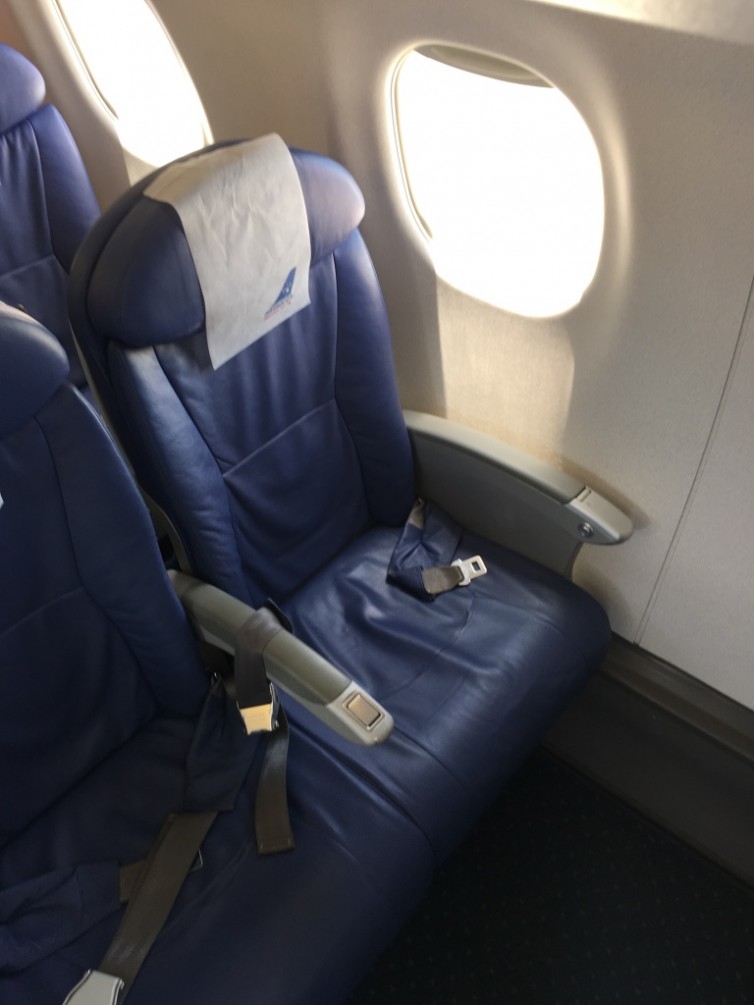 Boarding and departure of the flight was on-time and we had a healthy load of 58 passengers for the first segment to Gove. This flight had a scheduled duration of 1:30, so I honestly was not expecting much in terms of on-board service, especially given the experience with flights of similar length in Europe. But then I remembered this was a regional airline, in Australia – one of the few countries in the world where in-flight service is still a large part of the passenger experience.

The service started off with a choice of cold drinks, which was followed by a hot lunch. Yes you read correctly – a hot meal on a one-and-a-half-hour flight! And this was not the end; post-lunch tea and coffee were also offered. I was really impressed by this, as no other Australian mainline or regional carriers come close to offering the same type of service on a flight with such a short length. 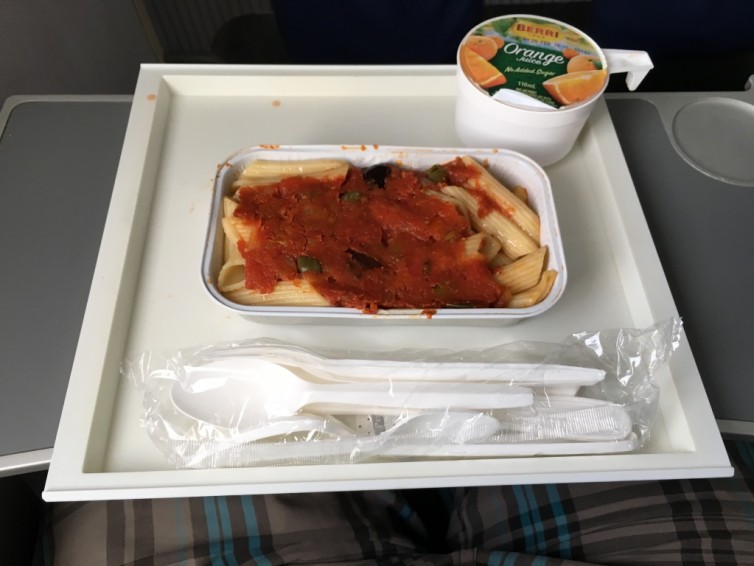 A hot meal on a 1.5-hour flight, a rare sight these days! – Photo: Jacob Pfleger | AirlineReporter

Following an on-time arrival into Gove, all passengers were asked to disembark the aircraft, with those traveling onto Darwin permitted to leave their carry-on luggage on-board. I was surprised that for our 30-minute transit stop, even Darwin bound passengers were asked to disembark. According to the crew, this was so that they could clean the aircraft and for refuelling procedures. There is not much to be said about the Gove terminal building except that it is clean, functional, and more than sufficient for the three daily flights that service the airport. The real star of this airport terminal is the air conditioning system, which is very welcome, especially during the wet season when the humidity often exceeds 75%. 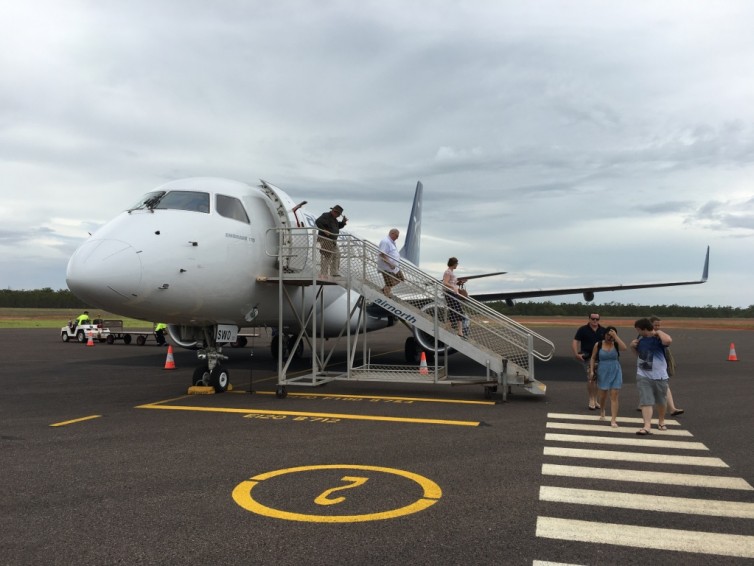 A quick 30-minute stop in Gove on the way to Darwin – Photo: Jacob Pfleger | AirlineReporter

After a short while, all passengers were invited to re-board the aircraft for the quick one-hour flight to Darwin. On this leg, there were 31 passengers and, from what I could tell, most were joining the flight at Gove with very few passengers thru connecting from Cairns. Following a powerful takeoff, the inflight service once again commenced. For this shorter flight, we were offered a very tasty ham and cheese sandwich along with a choice of cold drinks. Once again, the service went above and beyond what I was expecting. 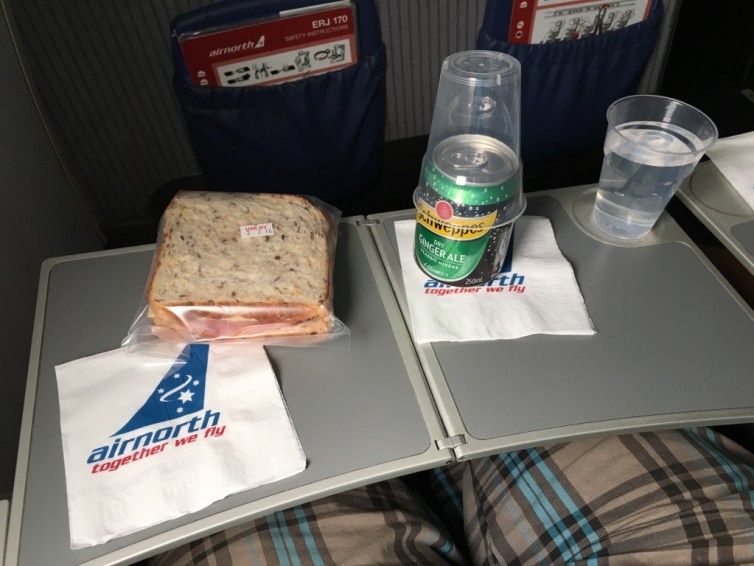 An equally impressive meal service on the second leg to Darwin, with a flight time of just one hour – Photo: Jacob Pfleger | AirlineReporter

Given that it was getting late in the day during the wet season, the storm dodging soon began as we encountered some moderate turbulence on descent. I have to say, the E-170 handled all the bumps very well, and in no time we were landing in Darwin 10 minutes ahead of schedule. A walk of about 100 meters was required to reach the terminal building and, once I was inside, my bags were already on the carousel. I was very impressed! 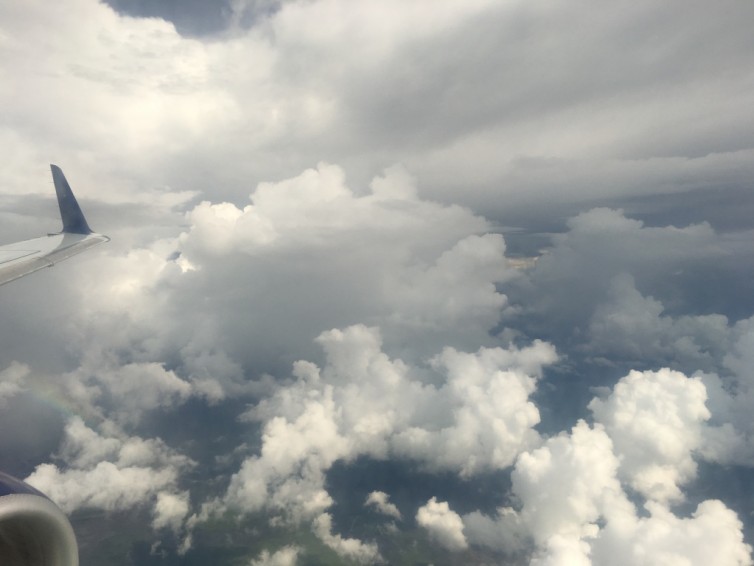 Nothing like a bit of storm dodging in the top-end during the wet season – Photo: Jacob Pfleger | AirlineReporter

Overall, Airnorth delivered a very solid and quality product for a regional carrier. Even by Australian standards, their service goes above and beyond what is expected of an economy class travel experience in this day and age. Airnorth also places a strong focus on brand identity – something that I find airlines are moving away from. Given that Airnorth operates to some very remote communities, often as the sole carrier providing the services, brand identity and recognition are a crucial aspect of building the communities’ support and trust for the airline. 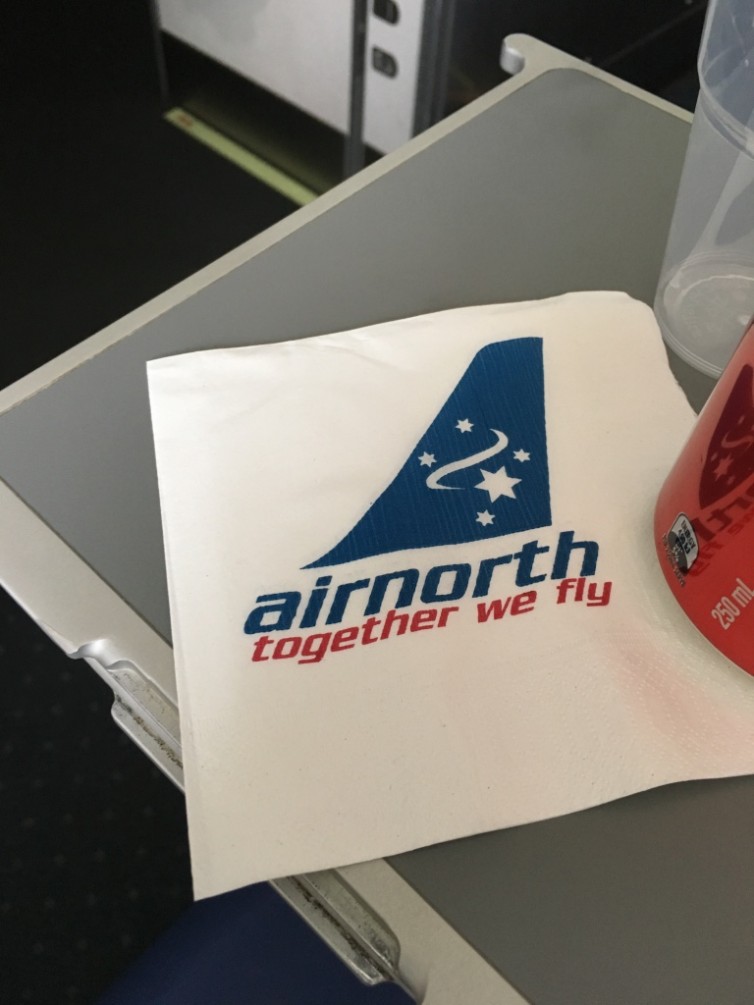 These are great, keep them coming, just retired after 36 years with CO

Great little airline. Would be even greater if they operated in the U.S.!!

Air North are about to commence services outside of northern Australia for the first time.
http://australianaviation.com.au/2015/12/airnorth-to-serve-melbourne-and-cairns-from-wellcamp/

One of the best things about flying in the Top End in the “good old days” prior to increased security requirements was the relaxed way things were done. I remember flying Brisbane to Darwin with a stop in Mt Isa on a 727. In Mt Isa we were offloaded to the lawn outside the “terminal”, behind a waist-high fence. When the flight was ready for departure the captain leaned out of the aircraft and called out: “OK everyone, let’s go”!

I also remember flying from Groote Eylandt to Darwin. No terminal, no fence and a shed for the baggage. We stood on the apron, waiting for the MMA F28 to arrive. As it taxied in, we wandered off the apron until it had parked and shut down.

Didn’t knew they existed… So there are 2 airlines with the same names…
Air North in Canada (est1977) http://www.flyairnorth.com/
Airnorth in Australia (est 1978) http://www.airnorth.com.au/
this is where a “space” in the punctuation is important.

I am not sure if we want to admit this — but we accidentally wrote to the wrong airline (in Canada) for this story — heh. I am guessing we were not the first ones :).

Hello Jacob. While Airnorth should be commended for their inflight offering, your statement is not 100% correct. I think you will find that Qantas serves a hot meal of 50% greater portion, along with complimentary beer and wine, chocolate and tea and coffee (on request) on dinner flights which can be as short as 50 minutes on the East Coast. On almost all such flights further beer, wine and water is offered upon meal collection.

The flight service seemed pretty spartan, but as you say is OK for a 70m flight. I really liked the views!