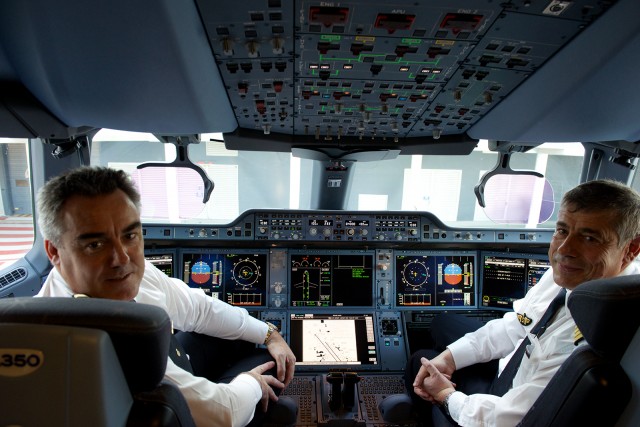 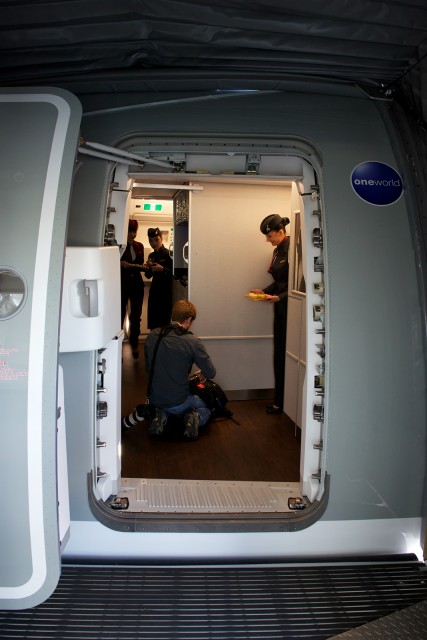 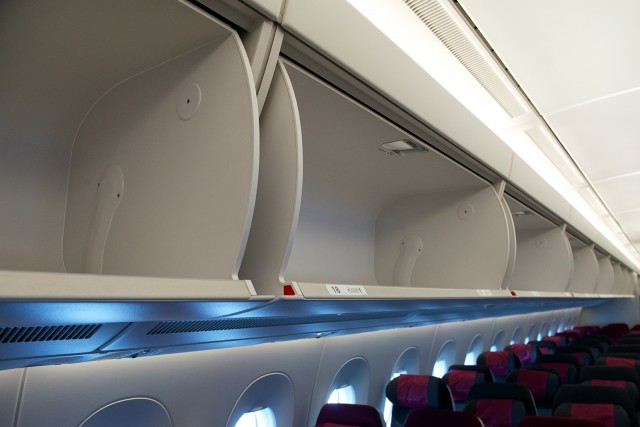 The overhead bins are recessed, but massive. Airbus has put a lot of effort into improving the passenger experience and with more passengers than ever going carry-on only, these larger bins are going to make everyone have a better flight.

Thankfully, this economy class flight would be less than an hour, as business class was reserved for the VVIPs. To further confound this; my seat, 33F, was not a window or anywhere near them. As luck would have it, it seemed as though the window seats were assigned for those without any sort of photographic equipment. Such the luck. 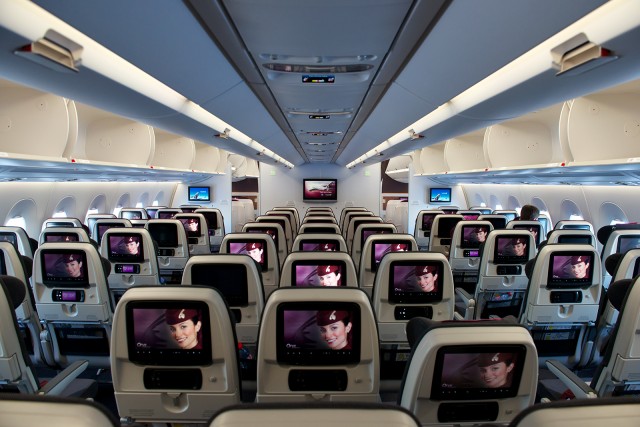 But at least the windows were huge. It’s not just marketing — they really make the cabin feel more spacious and open. Better yet, there’s no silly electronic window translucency controllers that you would find on the 787. When you want to block light from hitting you, or darken the cabin for passengers to sleep, one relies on this ingenious device called a plastic window shade. The future is now! 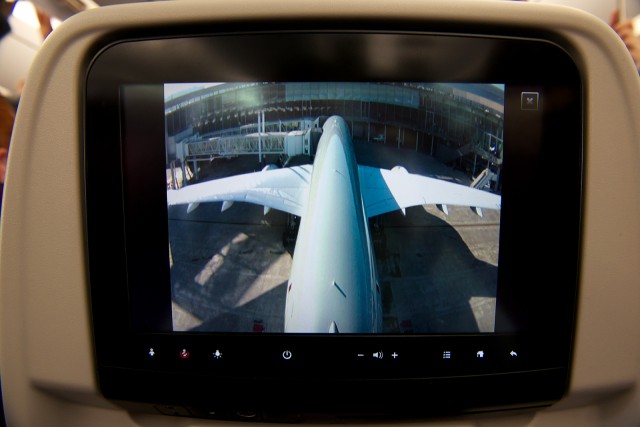 Anyway, let’s focus on the good things about Qatar’s A350 economy. It’s 32″ seat pitch. With the way the seats are designed it feels more like 34″. The IFE screen is huge, larger than first class on some airlines at 10.6″. They’ve even gone all out and added a hand-held screen as well that allows further interactivity with the system. For example, you can have a movie going on the mainscreen, and a map going on the hand-held. 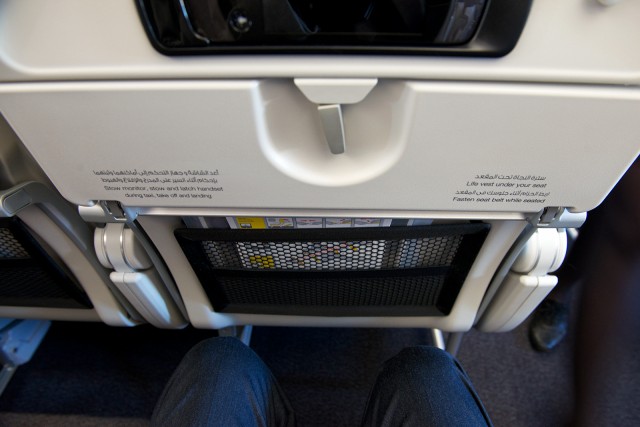 The flat floor of the A350, when combined with the vertical sidewalls, allows the A350 to achieve its design of an 18″-wide economy seat at nine-abreast. You can really feel the difference. The design also does give you noticeably more shoulder room. Given the luxuriousness of the product, most airlines would probably try to upsell it as premium economy. It is clear, from even a short interaction, that it offers a lot more value compared to the competitors. 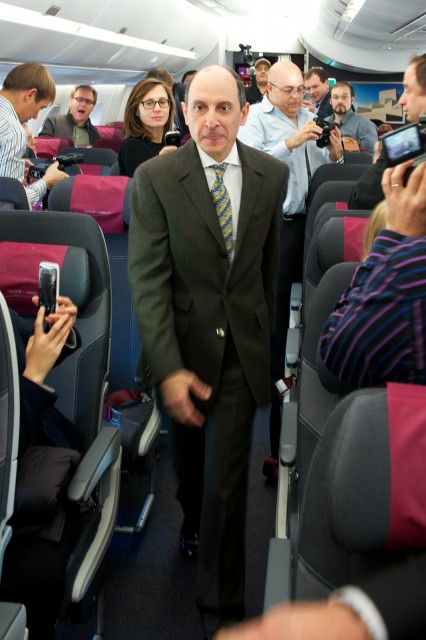 Suddenly, Qatar Airways chief Akbar Al Baker appeared. I’m still not sure why. It’s always awe-inspiring to see him, so I was thrilled.

After the surprise scrum of His Excellency (HE) Al Baker walking past everyone, it was time to once again sit down, and pushback.

BONUS: Qatar Airways Takes Delivery of the First Airbus A350

Startup was extremely quiet. Yes, there was a signature Rolls Royce growl, but it was muffled. It was terrifying how quiet the aircraft was. Even in the aft economy section, it was quieter than the APU on most current-generation aircraft. I am sure there are some people out there rejoicing in this, but I don’t consider it real flying unless I have a headache afterwards. 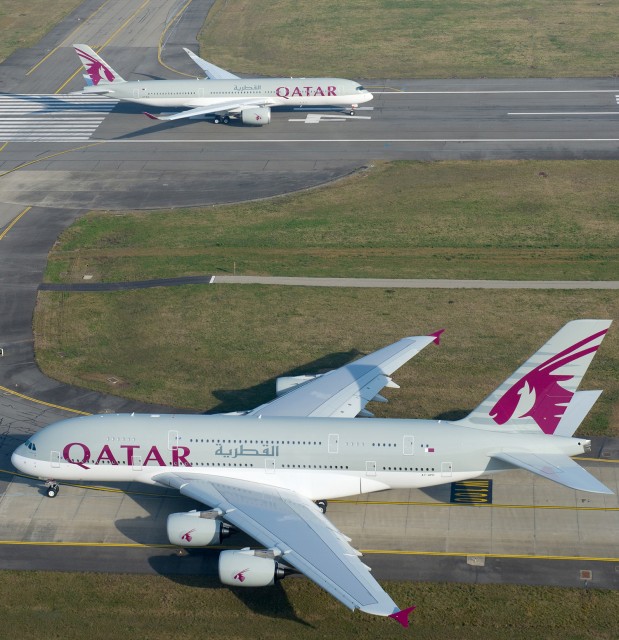 Qatar Airways’ recently-delivered A350 XWB and A380 jetliners taxi out before departing on their ferry flights from Toulouse, France to the carrier’s hub in Doha, Qatar – Photo: Airbus

I am sure the views on taxi were great, but I couldn’t see anything. Same for take-off. I longed to watch the wings flex gracefully skyward. Instead, I had a nice view of the runway courtesy of the three cameras that can feed the “A350” section of the IFE. The takeoff roll lasted 22 seconds. Nothing even close to a high-thrust setting was used, but in either case the noise was more of a faint rushing of air than a traditional jetliner.

Once we were at cruise, it was time for everyone to try and take the exact same two pictures. Either a shot of HE Al Baker sitting in his business class seat, or the man right next to him, Airbus President & CEO Fabrice Brgier. Clearly, everyone had to do airborne video interviews with them as well.

I’ve never seen a more gridlocked cabin. Remember, we were only given 45 minutes of air time. It’s a testament to the A350 that it could stay so perfectly stable with the entirety of the economy cabin rushing forth to the nose. I just wanted to go up and see business class. Big mistake. What I should have done was use the opportunity to look out the window. 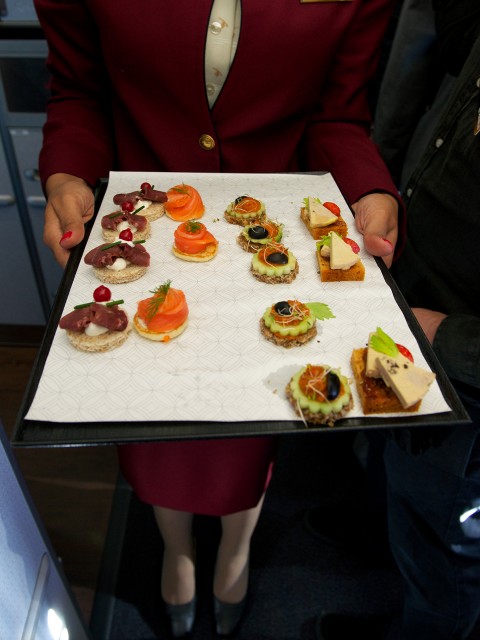 Being stuck in the aisle gives you a lot of time to snack. The smoked-duck canaps were the best. Photo: Bernie Leighton | AirlineReporter

Instead, stuck in the aisle with all the other people who wanted to get the CEO shots, and the poor flight attendants trying to distribute champagne.

It felt like I was waiting to see a celebrity after a concert on land! The longer I waited in line, however, the more I began to think “Hey, maybe taking a shot of the CEOs enjoying the aircraft would be a great idea after all — It would be a great shot to lead the story!”

By the time I had reached all but three rows away from Fabrice, a flight attendant instructed me it was time to return to my seat. Fifteen minutes later, I had actually made it back. Oh well. 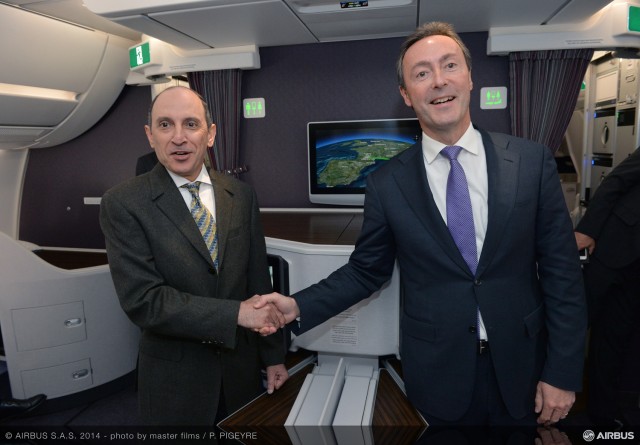 We flew over the Pyrenees Mountains to, inadvertently, show off the A350’s advanced gust protection system. In terms of flying at a relatively low level over the mountains, I’ve never felt anything so smooth. The system works.

The thing that I only realized in hindsight was that it barely even felt like we were flying. There was no dryness in the air, only a faint sound of rushing air, and very little sensation of flight. It’s astounding how utterly unobtrusive the aircraft is. I’m torn on whether I actually like that or not.

Landing was, however, unremarkable. I think that’s a good thing. Long after everyone else had left. I managed to work my way up to the flight deck. 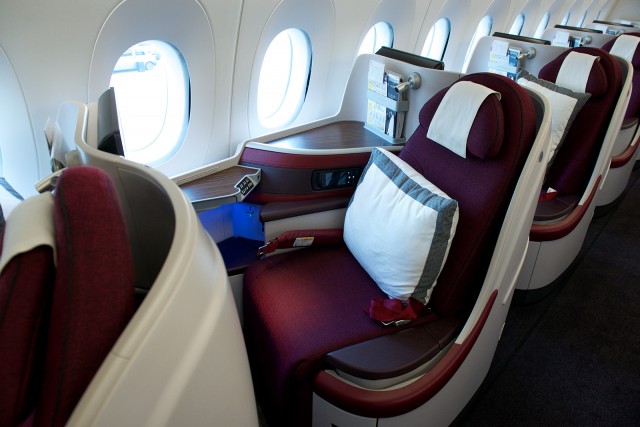 After that, I was finally able to check out business class. It looks fantastic!

Overall, the A350 feels like it is a game-changer in terms of passenger comfort. I can’t wait to actually try it on a long-haul flight and put my assumptions to the test.

https://www.airlinereporter.com
End of an Era: Qantas Retires the Boeing 767 from Passenger Service
So Long, Citrus! A Look at AirTran’s History and Final Flight Experience
6 Comments

A nice report, mostly.
Even if Bernie did not get a window seat, I’m happy to see a report about Coach Class facilities, where most folks fly. Notes about the seats, pitch, IFE system are welcome additions to the norm. Since this was a demo flight, I’d discount the service notes as both firms were out to impress everyone; that’s not Qatar’s coach standard my any means.
One must wonder if the Dig about Window Shades is necessary. (IMHO it is first about weight and then cost. The electronic system now used by the “Other Brand” likely weighs less-per window, but that is only a guess.)
Is some disclosure statement missing?
On the whole, an excellent report; one that confirms the new A350 as a “SLC-Friendly” airplane. As a direct competitor to the B787, A350 operators will be watching operating costs, dispatch reliability and other measures with microscopes, so it will take a few years to collect data and and make meaningful comparisons. Again, the window shade snipe was unnecessary in an otherwise great review. I cannot wait to read a review by a SLCer who spends ten hours in Qatar’s Coach class. And lastly, one must always consider Qatar’s personnel practices. Some write it off as a “Cultural Thing,” but it goes far deeper than that. Al Baker and Qatar are not obligated to conform to Western employment standards – and I’m not obligated to patronize an airline that abuses its employees.
-C.

I flew Qatar Dreamliner from SIN to CDG last November and
Would have to say it was the most wonderful flying experience
I have had in 38 years in the Travrl Industry.
The service was exceptional from the ground staff in SIN to the cabin crew.
I flew EK on the reverse journey. Bitterly disssapointed, all round.

Will defiantly be looking at more future travel on QR. I have raved with the reviews to
My colleagues, who have not flown nor considered previously.

Keep up the great job QR.

I enjoyed the review but like Cook I am totally surprised by the electric window a la Dreamliner snipe. The window, although not perfect, is an innovation.Kudos to Boeing for having the testicular fortitude to try something new. Maybe the author is biased towards towards Airbus. Each company offers something new and maybe one day these airliners will make stops where I reside.

plastic window shade..and the future is now…just doesnt go together.

A350 is the best aircraft in the world of course A380 is also included.

Despite all the silly talk about the windows, I would have thought that just ignoring it was the best thing to do. Obviously put there to wind up people and it succeeded. The A350 is a beautiful aircraft and a clever one,the down side is the delivery problem, only 46 delivered in two years. Not a good advertisement whatever the pr guys say. Aircraft are picked for their use to an airline, not whether its American or European. I also understand the American pride in their products but please understand that both Boeing and Airbus are not made in the USA or France. The components come from companies world wide -so the aircraft are only assembled in the USA and FRANCE