Ã¾etta reddast is an iconic Icelandic phrase that roughly translates to “it’s all going to work out.” It seems a suitable title for the review, because everything on my economy-class flight on Icelandair worked out very well.

My flight was from Keflavik International Airport (KEF) to Seattle-Tacoma International (SEA) in seat 14A aboard TF-FIK, a 20-year-old 757-200 that must have gone through a refurbishment relatively recently, as the interior looked very fresh. The aircraft had originally been built for Iberia back in 2000, and, if you look closely, you can find traces of that heritage â€” the aft lavatory doors still have their “occupied” signs written in Spanish.

I was headed to Seattle on a Monday evening in February (before the coronavirus became an issue); not exactly prime tourist season, even by busy Icelandic standards. Correspondingly, the flight had quite a few empty seats. Once people finishedÂ  shuffling themselves around to sit with their traveling companions, it left me in the fortuitous position of having an entire row to myself, a treat that I haven’t enjoyed in a very long time.

Iceland is blessed with lots of geothermal energy – heat for most buildings in Reykjavik and Keflavik is provided via a centralized hot-water system that’s pumped from the ground, so they use that heat liberally. I slept with my hotel window open because it was so warm in my room despite my turning the thermostat to its lowest setting. In keeping with that vibe, the plane was uncomfortably warm right from the start; I wish I’d dressed in layers.

As opposed to the cushy recliner-style seats up front in Saga class (check out our past Saga reviews here and here), the economy section has contemporary slimline seats. They felt newer than the Saga seats and were suitably comfortable.

Given that the seats seemed relatively new, it was interesting to discover that the seat’s USB outlet, which is placed on the bezel of the seatback IFE screen, since I couldnâ€™t even charge my old iPhone 7 Plus. The phone’s battery level kept dropping while charging, despite only using the phone’s notes app. (you know you are living large when all you want to do is use the notes app when flying -Editor)

Being the plan-for-contingencies type, I did have an external battery pack with me, so I was able to keep the phone alive for the flight. 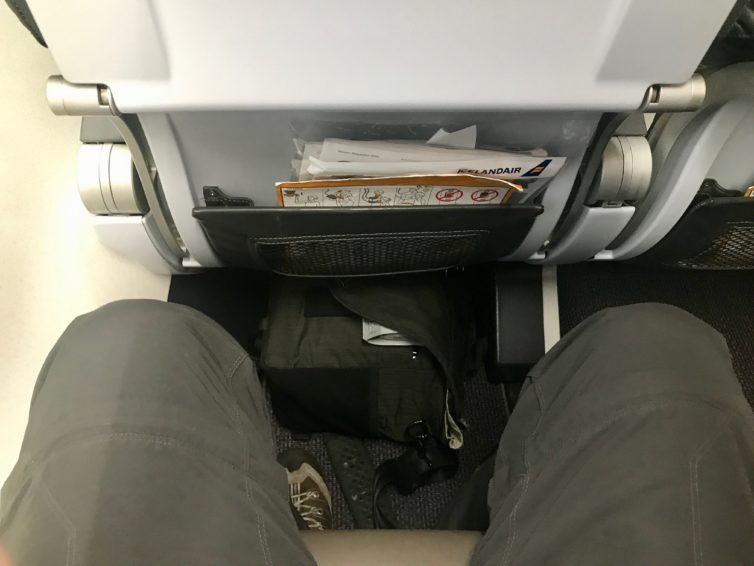 I don’t have long legs, but there still seemed to be an adequate amount of room in economy

There were tons of Icelandic music choices on IFE system, and accessible via a standard wired mini-phone headphone jack, located on the screen bezel below the USB charging port. Again, Mr. Prepared brought his own headphones; you’ll have to buy a pair in economy for a nominal fee if you forget yours.

WiFi is â‚¬12 for the entire flight, which seems pretty reasonable, especially considering that on some domestic U.S. airlines it can cost that much or more for a short hop. I was quite happy with the music selection, and opted to not buy the WiFi. 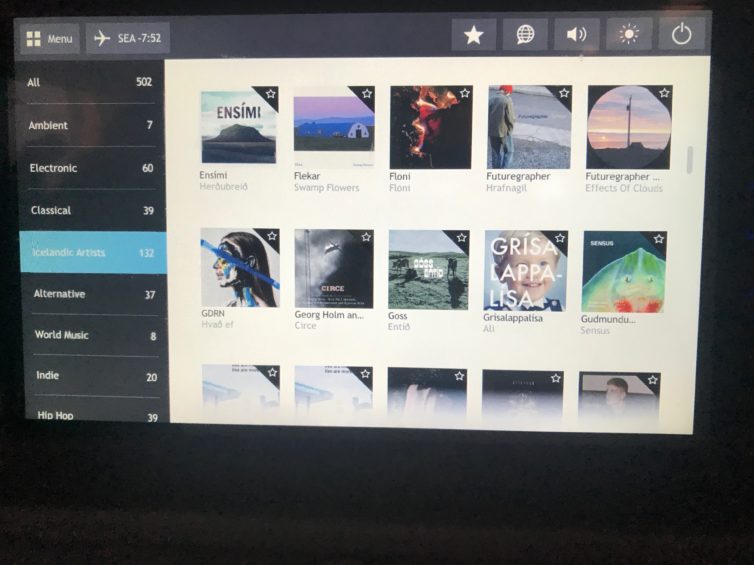 Another interesting thing to note is that the coach seat backs are considerably taller than any others I’ve experienced, and my tall self was very comfortable because of it, almost more comfortable than up front because, for the first time I can ever recall, when I rested my head back it actually hit the headrest; normal seats seem to only come up to my shoulders. 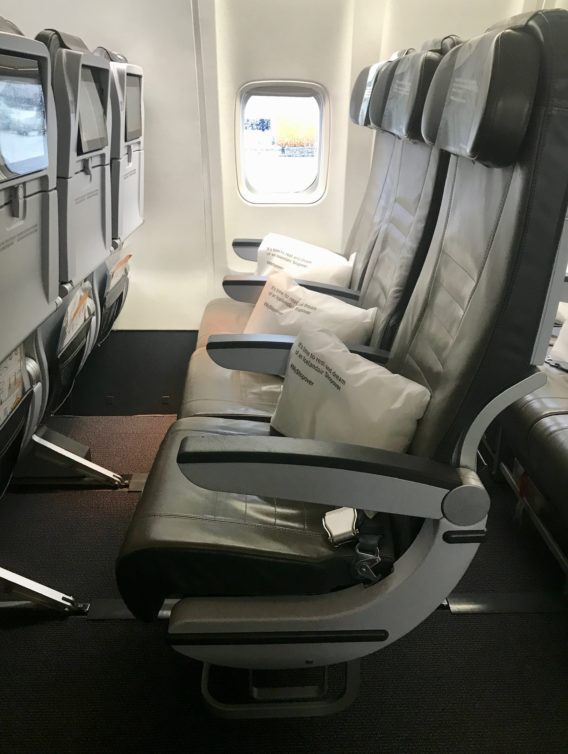 The single-aisle 757s have 3-3 seating in economy

Iâ€™d visited the airline’s Saga Shop online before my flight home, and preordered a couple model planes (of course). You can also pre-order meals there, provided that you’re up front in Saga class. The models were correctly delivered to me during flight, even though Iâ€™d requested a seat change from an aisle to window, and in a different row than I’d originally booked. 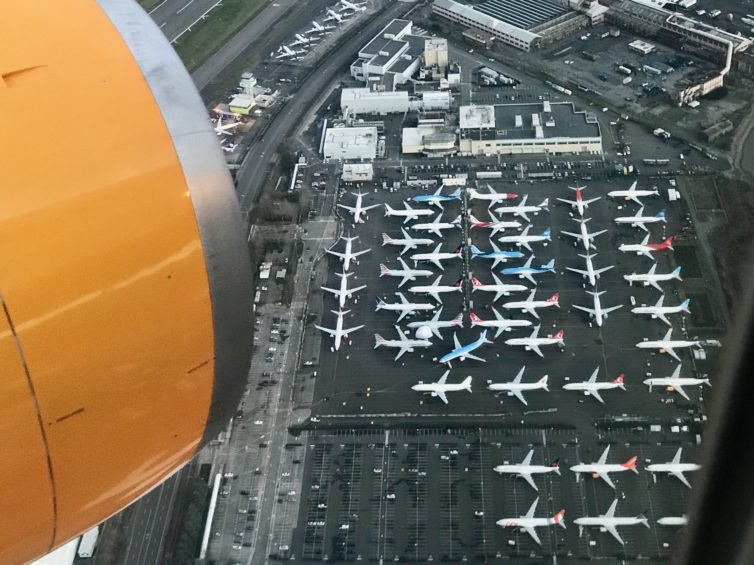 Just prior to landing at SEA, we passed over Boeing Field (BFI), where Boeing has parked quite a few of its grounded 737 MAX jets

Back to the preparedness part, I went all-in on the economy mindset and brought aboard a sandwich and a bag of cashews that I picked up in the terminal – they looked really good on the shelf (and were), so I didn’t buy any of the food on board; nonalcoholic beverages are complimentary.

The coach-class menu consisted of a couple hot-food items such as pizza and sandwiches, along with quite a few snack items and beverages. The cabin crew were efficient, pleasant, and friendly; you can’t really ask for more than that. All in all, Icelandair’s economy cabin was plenty comfortable for the 7.5-hour daytime flight.

Disclosure: Icelandair invited AirlineReporter on board at its expense for the round-trip flights; our opinions remain our own.

http://www.zeraphoto.com
Farewell Old Girl? Is the Sun Setting on the QANTAS Boeing 747, Thanks to Covid-19?
Airlines Doing Good Deeds During the Covid-19 AirPocalypse + How You Can Help!
4 Comments

Ugh – this has me in a quandary! I am planning my first trip to Iceland this fall and would fly PDX to KEF direct, about an 8-hour flight. I am a restless flier and try to stay hydrated, which means I am up and in the bathroom a LOT. I am torn whether to book an aisle seat in Economy or upgrade to SAGA. I am traveling solo to and from KEF. I have seen reviews saying the aisle seat has a tiny space for one’s belongings/feet – that doesn’t appeal to me. What to do…

Hi AM, thanks for reading! It is a long flight, and, at least IMHO, the Saga upgrade is definitely worthwhile if you can justify the additional cost.

That said, an economy aisle seat is still a reasonable option, as you’ll be able to get up without disturbing your seatmates, plus you’ll have a bit more cash to spend once in you’re Iceland.

Thank you, Francis! I will mull it over (and most likely splurge on this one). Happy travels!

You’re welcome! Hope you have a wonderful trip!