Let’s just start by saying that, yes, I saw the aurora on the flight, and, yes, it was awesome.

Saga Class is Icelandair’s top-tier cabin service, and is roughly equivalent to business class on other airlines. Check-in and boarding were a breeze. When boarding the aircraft, the 22 Saga-class passengers turn left toward the front of the plane, making it very easy to forget that you don’t have the whole plane to yourself. The accompanying checked-baggage allowance seemed quite generous: two 70-lb. bags per person.

Icelandair shares a lounge with several other smaller airlines in Seattle-Tacoma International Airport’s international terminal (SEA). The lounge is comfortable and clean, if a bit uninspired, but a fine place to wait for your flight. The hot-food options were welcome, and on the day I was there most of the dishes were Asian themed, which are a personal favorite.

The aircraft for the flight to Reykjavik was TF-LLX, aka Skjaldbreià°ur, a 757-200 which hadn’t yet been through Icelandair’s cabin refresh program. The interior was a tiny bit worn around the edges and had old-style IFE screens, but it was still all very comfortable and clean. Icelandair names its aircraft after Icelandic volcanoes, and, with about 130 of the things in the country, it doesn’t appear that they’ll run out of names anytime soon.

The ambient cabin lighting was a soft, steady ice-blue color; once through the interior upgrade, a plane’s ambient lighting softly flickers and changes color akin to the aurora that I saw out the window; the aircraft for my return flight was so equipped. The leather seats, with their 40’ pitch, 20.5’ width, footrests, and 120v power outlets made the seven-hour trip very comfortable.

The IFE selections were extensive dozens of movies and TV shows, and a lengthy music selection featuring Icelandic artists. I later learned that Icelandair has set up a couple of Spotify channels should you want to listen to those in-flight playlists groundside.

Free gate-to-gate wifi was available (it costs 11 euro back in economy), and I used it throughout the flight. It was surprisingly steady, albeit occasionally painfully slow, as is the norm for airline wifi. But I was easily able to do some final trip planning, take care of a bunch of email, and annoy a few friends via text and Facebook. 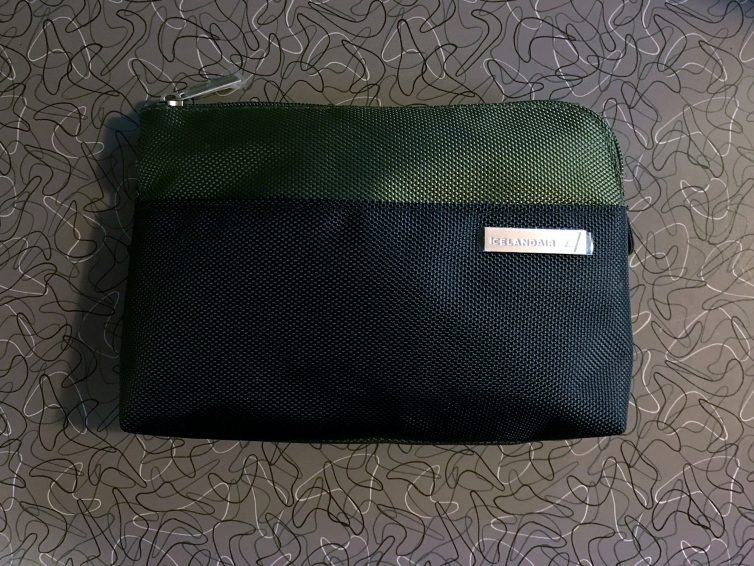 To me, amenity kits feel a lot like Cracker-Jack prizes for premium-class flyers. They’re fun to get, it’s cool to collect them, but they’re usually not all that handy in the end. These, though, are an exception – the bags themselves are quite well made and very nice looking, nice enough that mine have already found their way into my photo kit. – Photo: Francis Zera | AirlineReporter

Cabin service was solid – appropriately attentive and reserved. The first snack upon settling in was some divine cinnamon-accented caramel popcorn that’s made by an Icelandic company named àstrà­kur. You’ll note that I nearly ate all of it before I remembered to take a photo.

Meal service was quite good on both flights – I intentionally opted for what was offered rather than special-ordering. Outbound, the starter was mixed shellfish with lemon juice and coriander on a bed of lettuce, all very fresh and tasty. I selected the beef teriyaki stir-fry for my main course, mostly for the incongruity of the option, and was pleasantly surprised at how flavorful and well-prepared it was.

The cuisine on the return flight was a lot more Icelandic, with lots of seafood. The starter was a kind of salmon ceviche, with fish or lamb as the entree. While not a fussy eater, my two least-favorite foods are salmon and lamb – what were the odds of finding them both on a menu? I quietly asked the flight attendant if there were any other options – the result was a very lovely field-green salad with spicy grilled chicken that was cheerfully delivered and thoroughly enjoyed. In retrospect, I probably should have taken advantage of the ability to pre-order a special meal, but I was too busy enjoying all the Icelandic awesomeness to have remembered to go online before my flight. 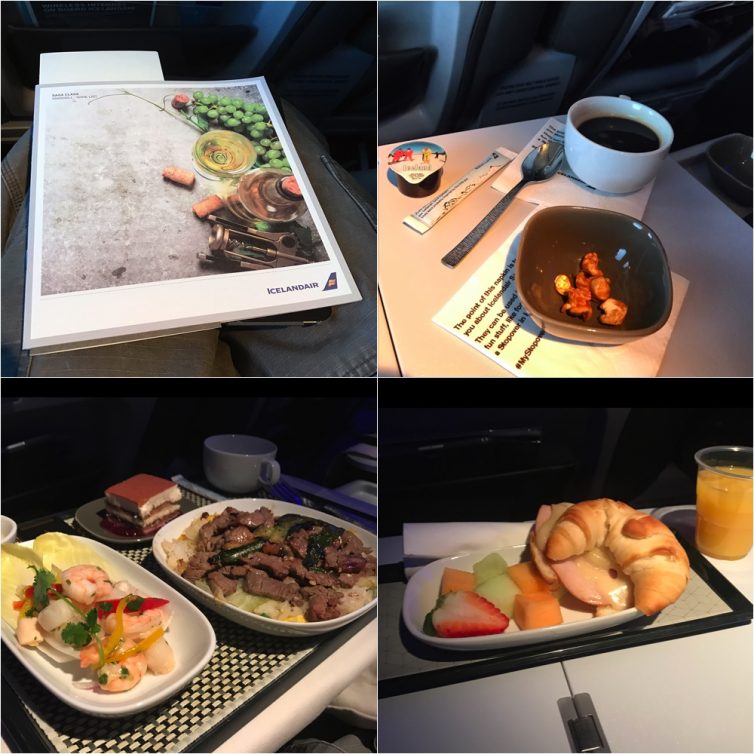 Meal service was quite good on both flights. Clockwise, from top left: the lengthy wine list; that delicious popcorn; the beef entree, and a morning snack before landing at KEF – Photos: Francis Zera | AirlineReporter

The outbound window-seat ride included a three-hour aurora borealis show that was mesmerizing and magical and all that it’s supposed to be, and I didn’t really care that it meant I’d not get any sleep that night. 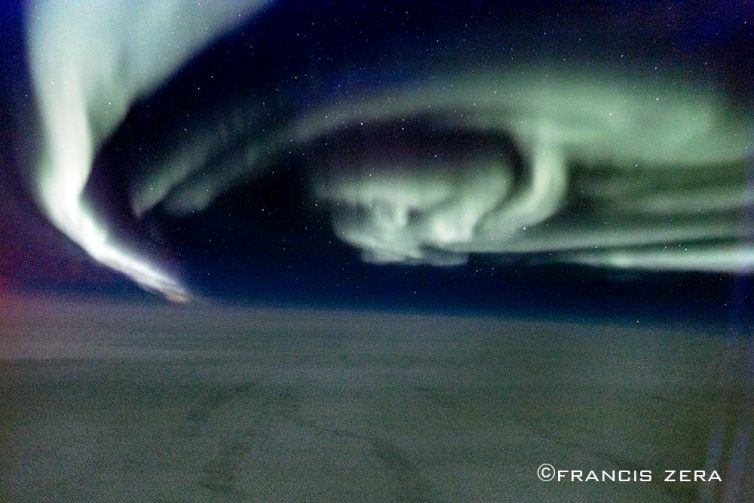 The aurora borealis accompanied the flight across northern Canada and Greenland

With all those bright spots, there needed to be one small disappointment to keep things real. It came in the form of their choice of serving Nescafe coffee. Living in Seattle has turned me into a bit of a coffee snob, and the overall experience onboard had me expecting something more along the lines of Illy or LaVazza.

Two million tourists visited Iceland last year, which means traffic at KEF is booming. The terminals are undergoing quite a lot of construction, and, as such, there’s a bit of expected disarray here and there.

It was a simple matter to pass through customs and passport control. But the aforementioned construction meant that signage wasn’t always easy to follow. I wound up at my departure gate in D quite early, only to discover that the lounge was in C and I’d missed the signage in the hallways. So I needed to go back out through passport control to get to the lounge, and then go back through to get to my gate. It was really not an issue, and I wound up with an bonus set of arrival/departure stamps in my passport. 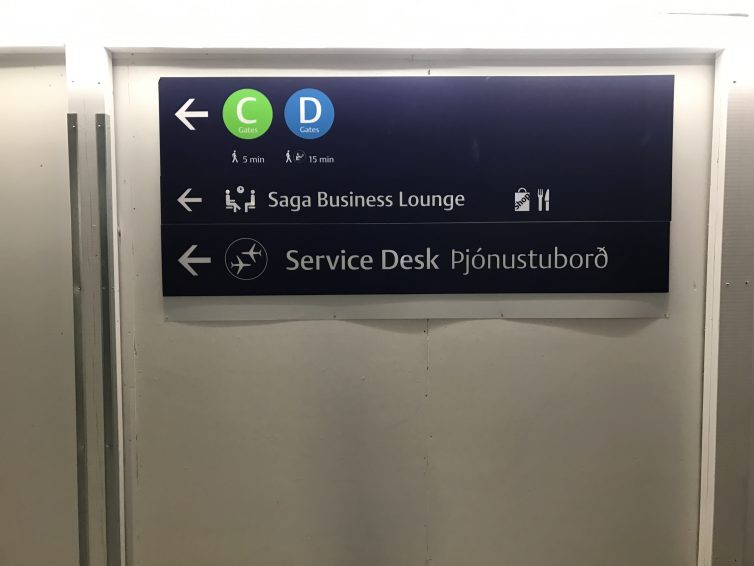 The lounge is to the left, but I discovered a bit too late that the turn is *before* passport control – Photo: Francis Zera | AirlineReporter

The temporary spaces at the check-in counter meant I also somehow missed the opportunity to have my bag marked as priority at check-in, which meant that, even though I breezed through immigration on arrival back in Seattle, I had to wait forever for my bag and then go through customs, totally losing that lead time. 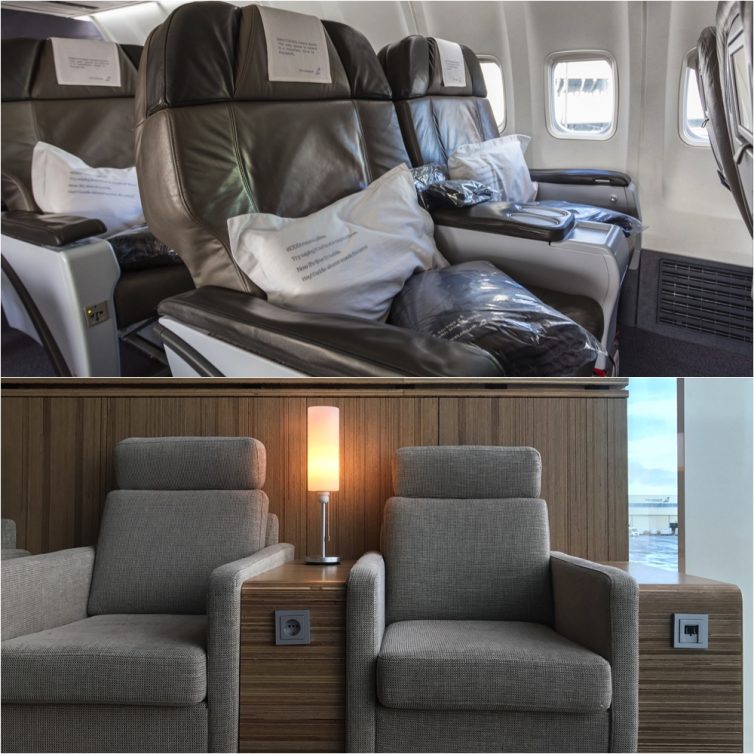 The KEF Saga lounge, although temporary, is still quite nice. There were plenty of power outlets (although I’d forgotten and packed my EU adapter in my checked bag), plenty of USB outlets, beverages, and a buffet. The only thing missing was a work table/desk with power outlets, but, again, it’s a temporary space. 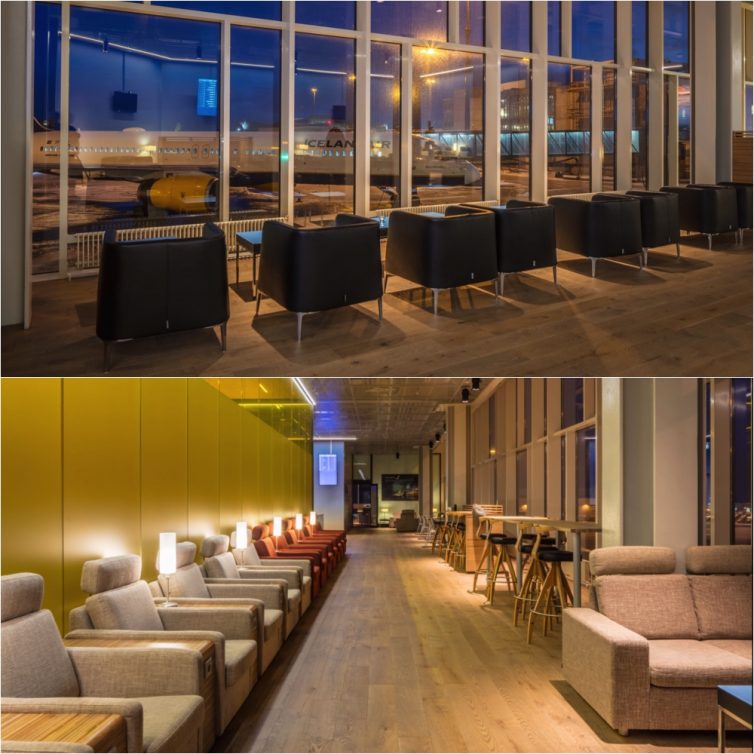 The lounge at KEF, although in a temporary space while a shiny new one is being built, was still very stylish and comfortable, with plenty of food and drinks available. – Photos: Francis Zera | AirlineReporter 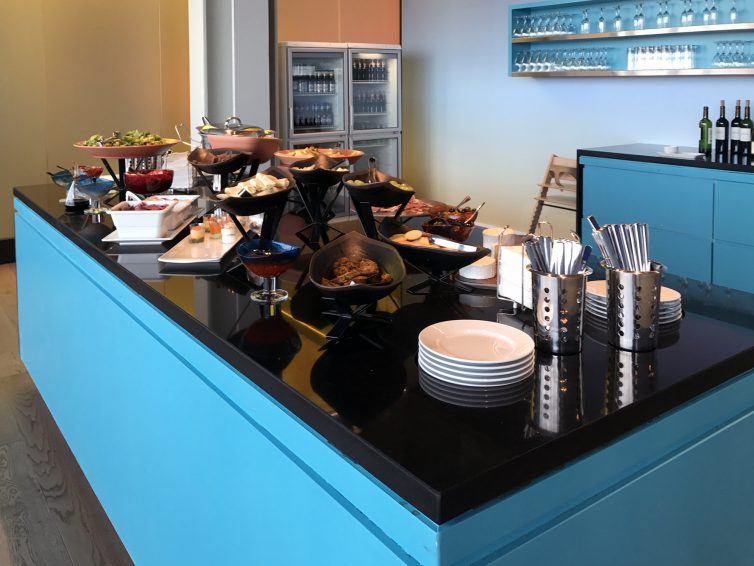 The fresh salad from the buffet at the KEF Saga Lounge was quite delicious – Photo: Francis Zera | AirlineReporter 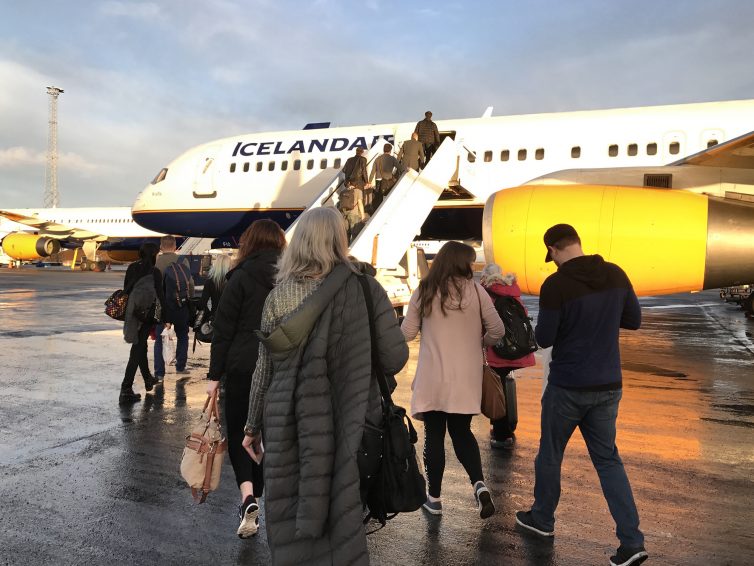 Boarding at KEF for the flight to SEA – Photo: Francis Zera | AirlineReporter

The process for the return trip was a very democratic, European-style process – everyone lined up, everyone checked in, everyone got on the buses, and everyone got on the plane out on the ramp. None of that ’œboarding by assigned seat’ protocol, but, also, none of the expected chaos I was used to with certain Stateside carriers who board everyone at once. It all worked out surprisingly well.

Disclosure: Icelandair invited AirlineReporter on board at its expense for the round-trip flights; our opinions remain our own.

http://www.zeraphoto.com
OPINION: The New Air Canada Livery Makes Me Hate Myself!
Flying Delta Air Lines – From Back to Front
5 Comments

A well presented and informative article, sir. The excellent photos give away the fact that you are indeed a professional photographer…

I just flew twice Saga class, Paris-KEF and back. Same experience overall as you say, eg. the lounge at KEF is hard to find. I found the lounge relatively poor in food, there was salad but no scrambled eggs/bacon despite my very early departure (6 am). On European flights no amenity bag is provided. Overall a fair experience which I would have rated good if the flight attendants were a bit more smiling, they did not seem to care much – but I found that this is cultural almost everywhere in Iceland.

How do they board wheel-chair bound passengers, or those who cannot climb stairs?

A very good question. I saw a portable lift with an enclosed cabin being used to deal with those very issues.