The 1st of July not only marks the start of the summer school holidays in central Europe, it is also a big day on the local aviation calendar. Last year, Emirates debuted the Airbus A380 on the Dubai-Prague route to celebrate five years of service. This year was no exception, as Korean Air announced the launch of Boeing 747-8I services on the Seoul-Prague route from the 1st of July until the 30th of September.

While the Korean Air 747-400 is no stranger to Prague during the peak summer travel season, this was the first time the carrier announced the route would be operated by the Boeing 747-8I, the longest aircraft in commercial passenger service today. Korean Air had previously operated a one-off Airbus A380 service to Prague, and if this event was anything to go by, I was quite excited to be part of this historic moment. Not only was this the premier of the 747-8I in Korean Air colors in Prague, it was also the first-ever flight of the aircraft type to the town — there have not even been any cargo versions. 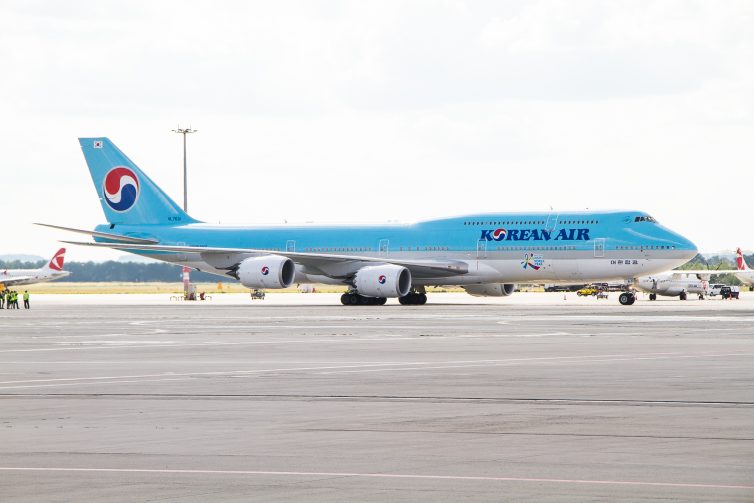 The 747-8I is a seriously looooong plane – Photo: Jacob Pfleger | AirlineReporter

For the arrival, as is now tradition, media made their way to the side of the runway where we could get some photos of the aircraft’s arrival. Unfortunately the conditions for photography were less than ideal, with a fair amount of heat haze as well as the position of the sun. Following the landing, we quickly made our way to the arrival gate to be able to witness the water cannon salute. 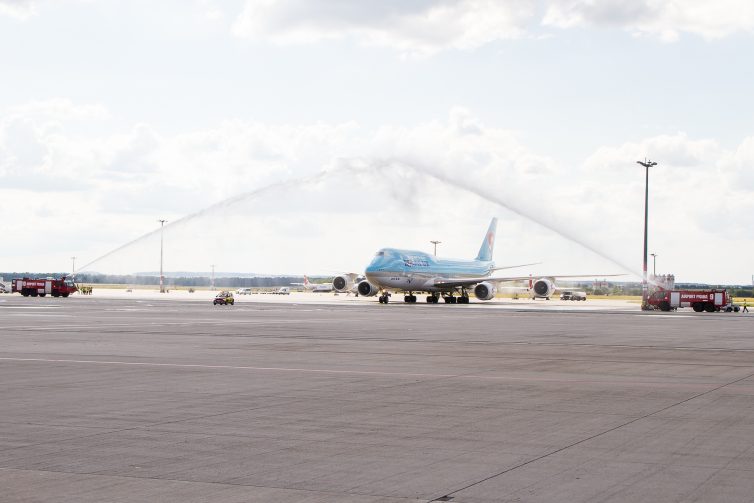 After the aircraft arrived and while it was being cleaned and catered, there were a number of speeches made by the numerous airport and airline management officials on hand. What struck me was the speech by the captain of the flight, as he is the only present Czech captain (Slavomir Piskaty) of any Boeing 747-8I in the world today. This is an already impressive achievement made even more unique by the fact that he is flying for Korean Air. 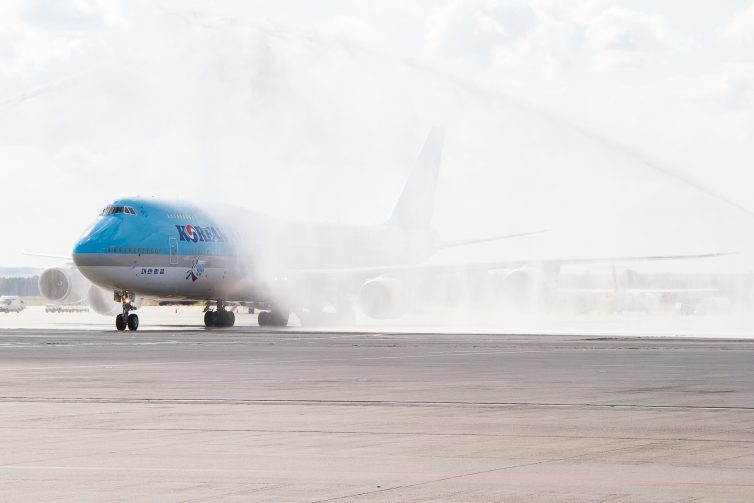 Getting a good clean on the way to the gate – Photo: Jacob Pfleger | AirlineReporter

Following the speeches as well as a few beers to cool down (it was really hot), we made our way through security and to the gate in anticipation of a tour of the aircraft. You only really begin to appreciate the length of the 747-8I when you are walking towards the plane. Its full length is 76.3m, which is some 3.3m longer than the Airbus A380 and some 2.4m longer than the Boeing 777-300ER.

With such an impressive length, one would expect Korean Air to pack in the seats. Unsurprisingly (for Korean Air), the aircraft is configured in a relatively low-density layout. There are six first class “Kosmo 2.0” suites, 48 “prestige suites” (business), and 314 economy class seats, with a very generous 34-inch pitch. 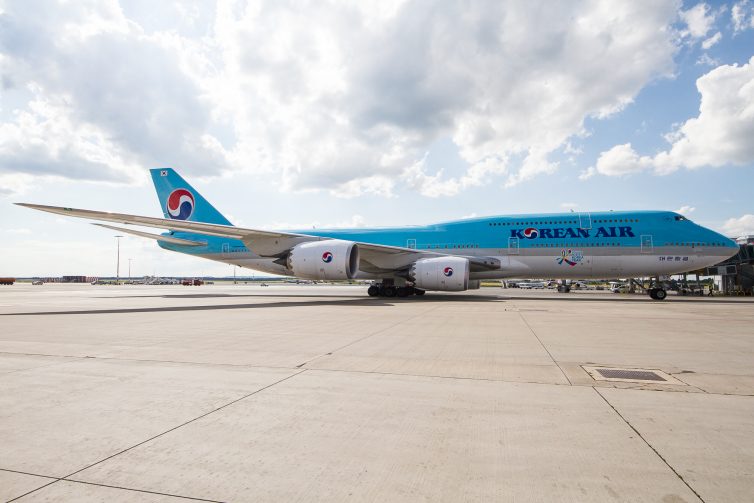 You only really appreciate the length of the Boeing 747-8i when you stand next to it – Photo: Jacob Pfleger | AirlineReporter

The first class Kosmo suites are quite premium as there are only six in the nose of the aircraft. They offer a very private and intimate travel experience in a 1-1 layout. As is the trend these days with most first class products, the suites can be enclosed, although unlike other major airlines, the doors are not as high, thus taking away a bit of privacy. Other than this minor gripe, the seat is very wide and large and there is the option for dual dining with your traveling partner in the one suite. The IFE screen did seem a bit on the small side for a first class product. 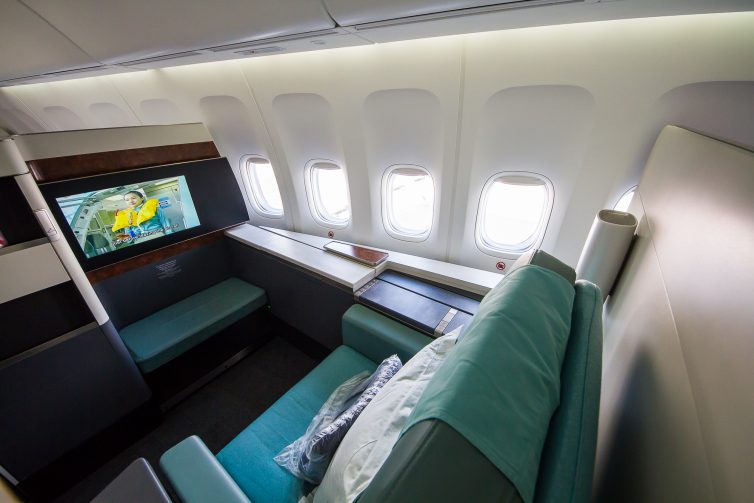 The first class Kosmo 2.0 suite; with only six on-board it is a very private way to travel – Photo: Jacob Pfleger | AirlineReporter

Where the Korean Air 747-8I really shines is its business class product. The prestige suites are really a class-leading product, using the same seat as Oman Air on their 787 and Japan Airlines. It is a unique design for a 2-2-2 layout. The window seat has a little entry way, meaning there is no need to step over your traveling companion. There is also a screen that can be raised between the seats providing a private oasis at the window. 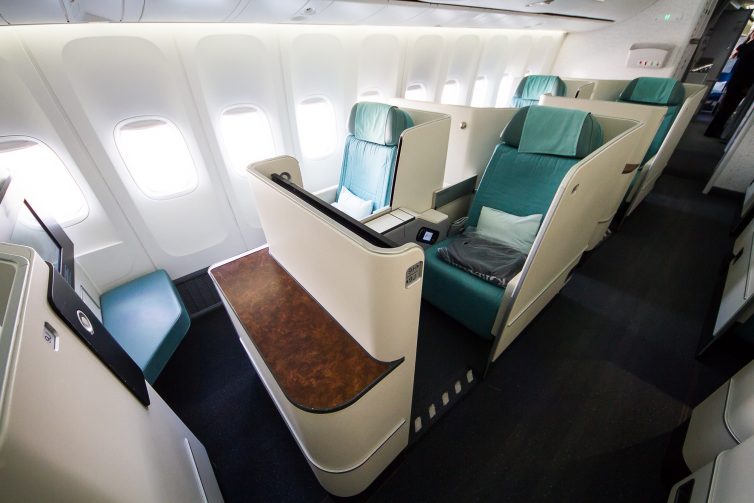 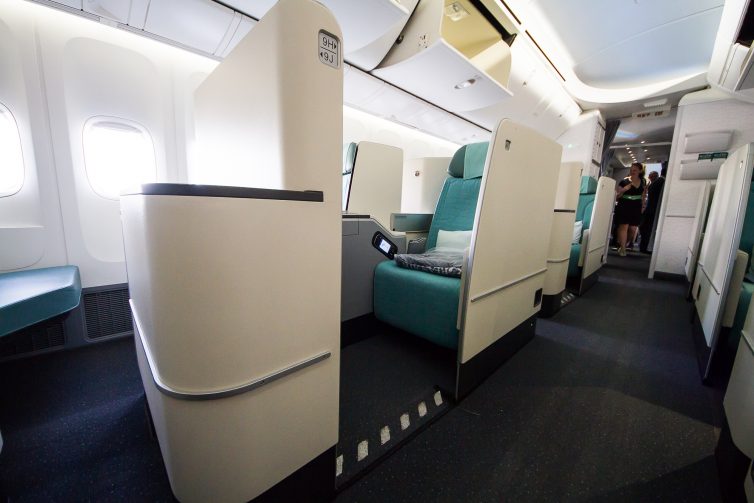 There is no need to step over you traveling companion thanks to an ingenious design for window seat access – Photo: Jacob Pfleger | AirlineReporter

Even economy class on the 747-8I is very nicely thought through. With a generous 34-inch pitch and the “old school” reclining seats (none of this “slide forward” rubbish) it is a very nice way to travel if you are on a budget. Given the current pricing of Korean Air ex-Prague, it makes for not only an affordable, but also surprisingly comfortable, way to travel to Korea and beyond. 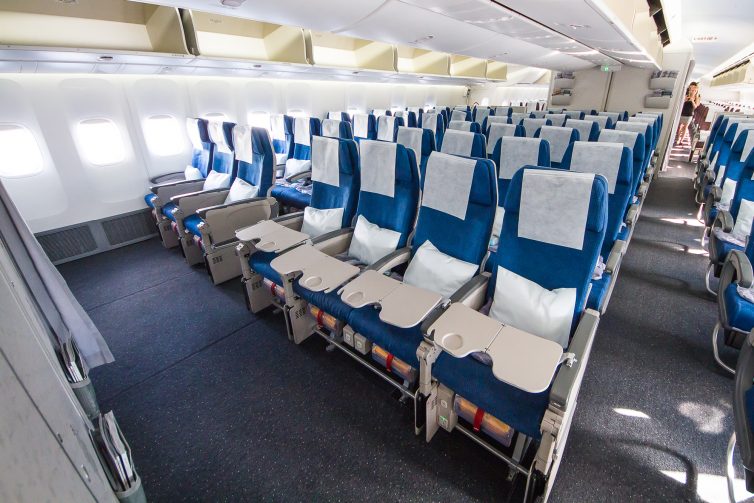 Economy class on the Boeing 747-8I is also very comfortable with a 34-inch pitch – Photo: Jacob Pfleger | AirlineReporter

Korean Air’s Boeing 747-8I is certainly an impressive aircraft, not just for us AvGeeks but also for the traveling public. It offers a very nice range of products suited to everyone’s travel budget. If you get a chance to travel on a 747-8I, I say take it as this aircraft is far more rare, unique, and beautiful than any Airbus A380; well, except maybe Etihad. It is sure to become harder to get on aircraft such as this in the future as airlines continue to look at cutting costs where possible, and at the end of the day it will always cost you more to run four engines instead of two. 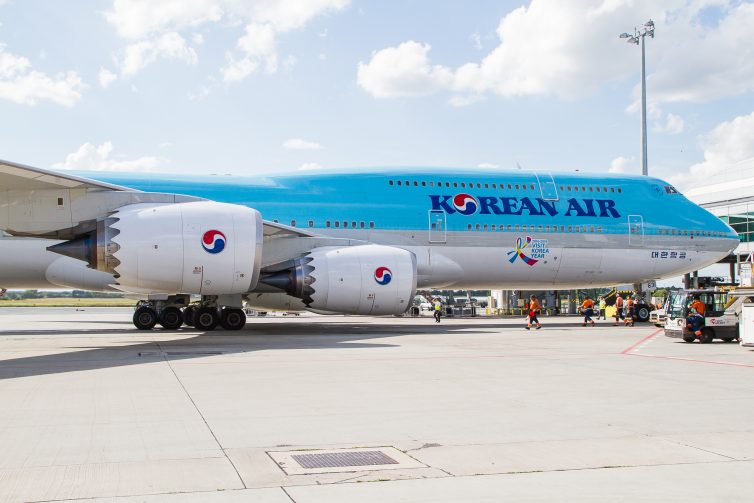 The beautiful and elegant curves and lines of the mighty Boeing 747 have stood the test of time. Sadly, its days are numbered as airlines continue to cut costs where possible. – Photo: Jacob Pfleger | AirlineReporter

https://www.airlinereporter.com
Up, Up, and Away with the TWA Museum in Kansas City, MO
Thomas Cook: An Airline You”ve (probably) Never Heard of Before
1 Comment

Once again BOEING. They just got it. There is so much Airbus can learn from Boeing. Thank you Jacob for a awesome article.