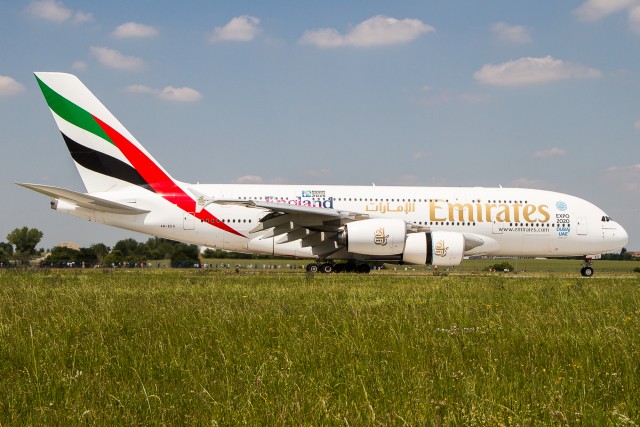 It’s always cool to be able to photograph from the side of the runway – Photo: Jacob Pfleger | AirlineReporter

Following the registration for the event (at an airport check-in desk, how cool!), I made my way to the gate area where an extravagant event was prepared for VIPs and the media. This included not only champagne (which is a given at all events in Czech aviation) but also some premium hors d’oeuvres such as sushi, sashimi, and various other little bites that can be found in the carrier’s business and first class lounges worldwide. After a few snacks, and much champagne, it was time to make our way onto the apron to prepare for the aircraft’s arrival. 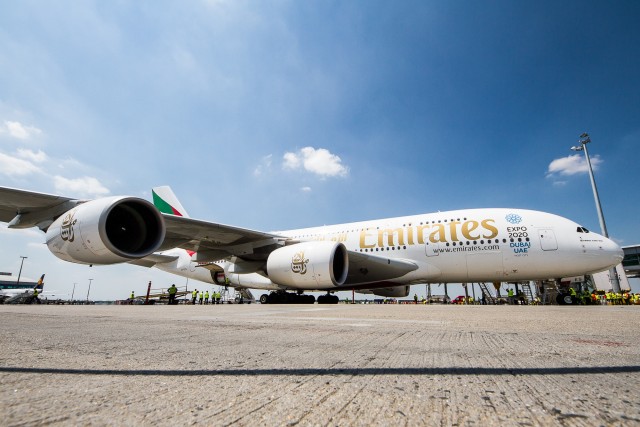 One of my favourite angles, really puts the size into perspective (shame about the light) – Photo: Jacob Pfleger | AirlineReporter

Unfortunately, the winds on the day were favoring a runway 06 arrival, which meant that it would not be possible to get a clean touchdown shot without heat haze. Despite this minor setback, it was still a magnificent sight to see such a large aircraft gracing the runway at Prague Airport, something that will hopefully become a more common sight with time. The plan after the arrival was to get back in the buses and re-position for the traditional water cannon salute.

Unfortunately, the pilot decided to take a rapid exit from the runway, meaning we did not have enough time to make it into position for the water cannon show. Despite this minor setback, it was still nice to see the aircraft utilize the sole A380 gate with three aerobridges; this was the first plane to utilize this new gate, which cost approximately US$6 million to install. 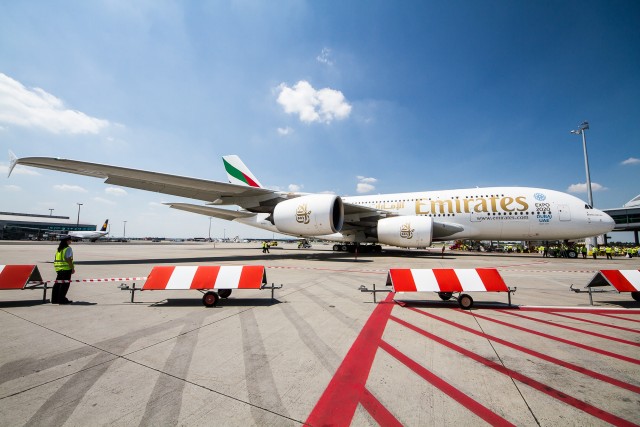 Despite missing the water cannon salute, it was still nice to get a photo at the gate – Photo: Jacob Pfleger | AirlineReporter

Upon arrival, we were given the opportunity to photograph the A380 in all its beauty as it was being serviced post-arrival. After this, we were invited to the gate area for a number of speeches and a cake-cutting ceremony to celebrate the fifth anniversary of Emirates’ service to Prague. 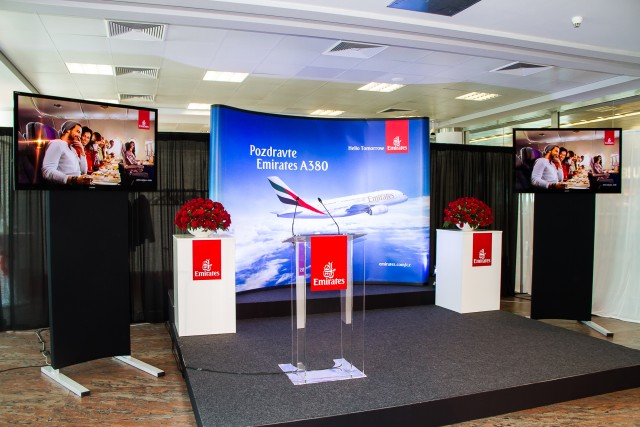 The most notable speech of the day was from Thierry Aucoc, Senior Vice President Commercial Operations for Europe and the Russian Federation. During the previous 12 months, traffic was at approximately 250,000 passengers, which according to Mr. Aucoc is very close to the threshold for Prague to be eligible for regular A380 service. This was also supported by a continuous load factor throughout the summer months of at least 90%.

I, for one, would prefer a double-daily 777 service, in lieu of a single A380, as it will increase the connection possibilities from the Dubai hub and might also mean that it would be possible to have an arrival into Dubai that will not be at ZDS (zero dark stupid). Considering the large amount of O&D (origin/destination) traffic, I’m sure it would be greatly appreciated by the traveling public. 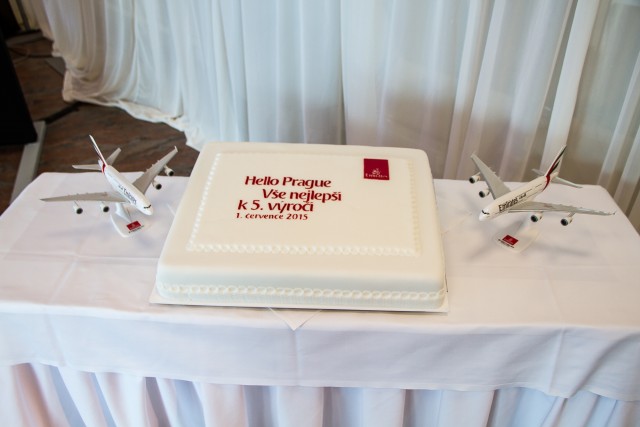 No birthday party is complete without a cake (which was very tasty) – Photo: Jacob Pfleger | AirlineReporter

After the speeches were completed, it was time to tour the aircraft. Having already flown on the Emirates A380, I was only curious to see the flight deck (something I have not explored in detail previously). Unfortunately, the flight deck was off limits, as there was no pilot on duty at the time.

Despite this, I was still happy to get some photos of the business class cabin, something I had neglected to do on my trip in November. The cabin is very large and airy, and whilst I do appreciate the 1-2-1 layout, I am not a fan of the excessive faux wood and gold tones used in the cabin design – to me it cheapens the whole premium experience. I can only hope that once the aircraft after due for a re-fit (in a very long time) that we can see some more subtle and elegant tones used. 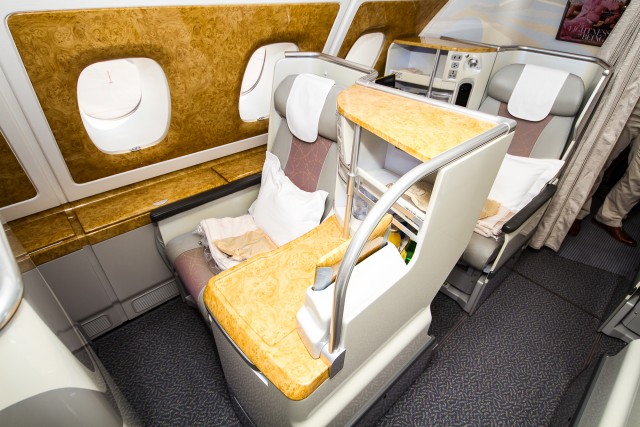 While the business cabin layout is nice, the decor is a bit too much, with the faux wood finishes – Photo: Jacob Pfleger | AirlineReporter

Overall, I was impressed with the organization and quality of the event. This was, by far, the best event that I had been invited to at the Prague Airport, not only in terms of activities but also the wide range of networking opportunities granted. I was proud to be part of this significant milestone in the airline’s operation into Prague. 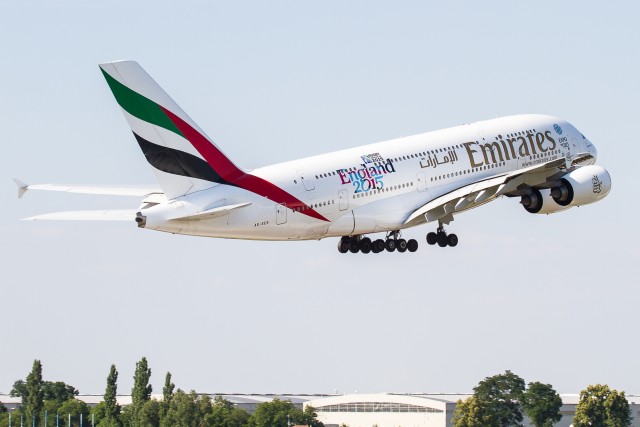 https://www.airlinereporter.com
Thoughts on the U.S. Export-Import Bank Shutdown and Why it Matters
BoatReporter: Heading to the Arctic to See Some Bears
2 Comments

Maybe one day Seattle will be so lucky as to get A380 service, even on a one-off basis. Oh, right…

The plan after the arrival was to get back in the buses and re-position for the traditional water cannon salute. Unfortunately, the pilot decided to take a rapid exit from the runway, meaning we did not have enough time to make it into position for the water cannon show. Despite this minor setback, it was still nice to see the aircraft utilize the sole A380 gate with three aerobridges; this was the first plane to utilize this new gate, which cost approximately US$6 million to install.