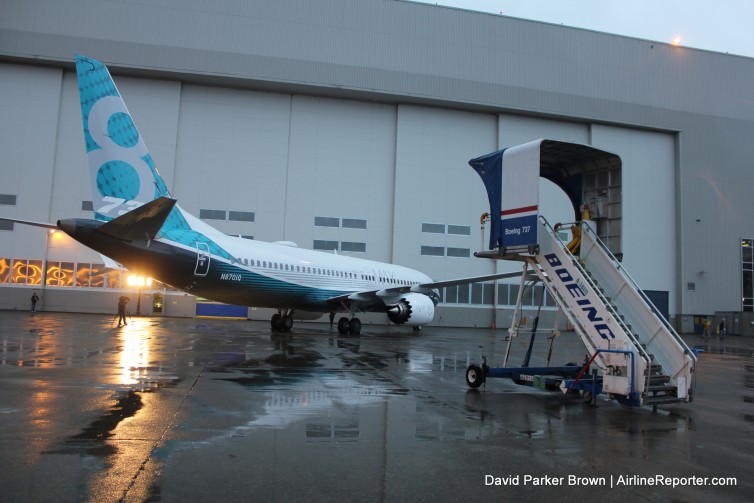 This week, Boeing took the time to not only show off their improved production line for the 737 MAX, but also the first (and second) aircraft. Over two days, AirlineReporter visited Boeing’s 737’s factory in Renton, Wa to learn more about the 737 MAX and how Boeing will go about producing them.

The MAX is the fourth generation of the venerable 737 and will replace the 737 Next Generation (or 737 NG). The first 737 first flew in April 1967 and, although it might have the same name and a similar appearance, the aircraft has changed dramatically over the years. 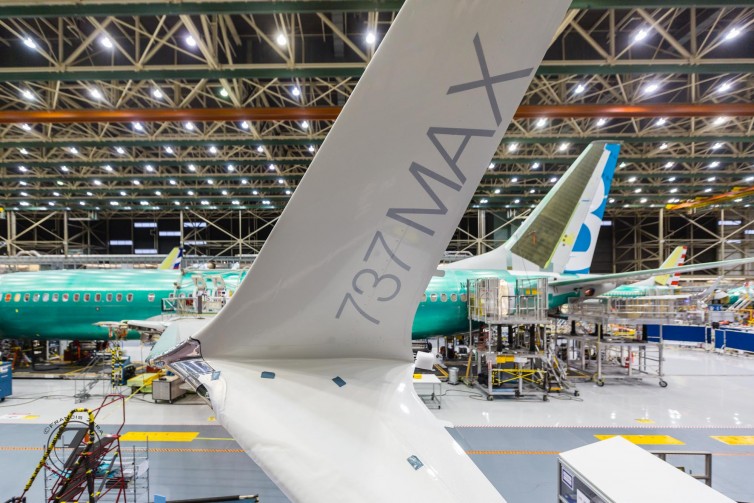 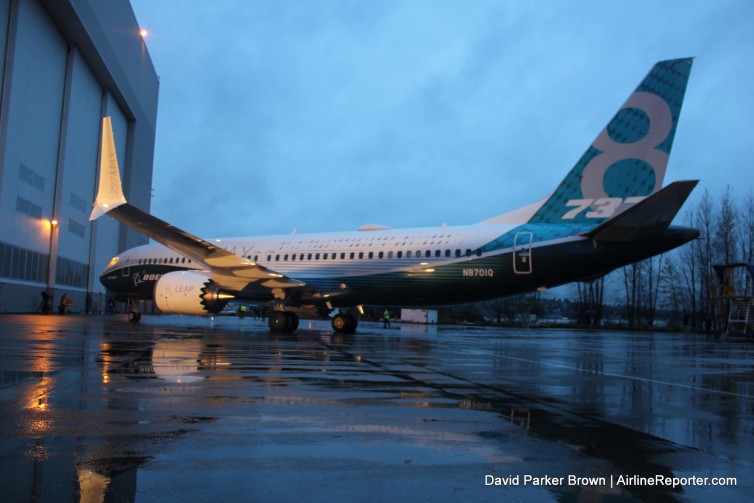 The first Boeing 737 MAX sits outside the Renton factory

737 MAX: About the new aircraft

One of the biggest selling points of the 737 MAX is its efficiency. The aircraft realizes the most fuel-savings through the use of the CFM International LEAP-1B engine. This engine incorporates many of the efficiency features of the GEnx engine, from which it was derived. In addition, the wing shape, engine nacelle, and the engine’s forward mounting position all work to smoothly direct air into and around the engine, providing additional efficiency.  Other fuel-savings come from reduced weight, and improved aerodynamics (including the new Advanced Technology winglet).

Boeing claims the 737 MAX will have a 20% increase in efficiency over the 737NG and that it will be 8% more efficient than it’s closest competitor, the A320neo. Although over the years I have found these kinds of claims  – from all manufactures – to be somewhat dubious, until they actually are put into operation with airlines. Either way, it is clear the aircraft will save airlines money (which they will hopefully pass onto their customers).

Other selling points of the new 737 are a 40% reduction in noise, the Boeing Sky Interior (which will now be standard), and the option for the roomier Space Bins. 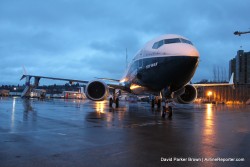 The MAX nose it is cool! 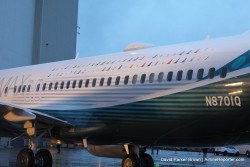 The different airlines that have ordered the 737 MAX 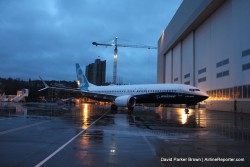 The MAX outside the factory 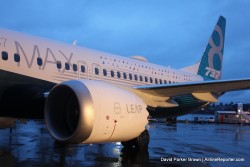 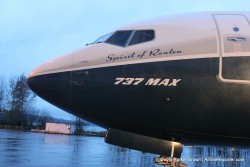 Called the “Spirit of Renton” 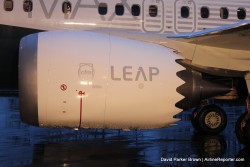 Boeing hopes to fly the first MAX in early 2016, with the first delivery to their launch customer, Southwest Airlines (who has 200 MAXs on order and another 191 options), during the third quarter of 2017. Orders for the MAX aren’t doing too shabby – already on the books are 3,000 orders, from 60 different customers from around the world. To help keep the planes rolling out, Boeing plans to increase production rates of the 737 (as a whole) to 47 per month in 2017 and then 52 per month in 2018.6 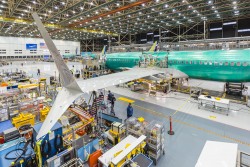 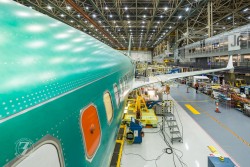 Just like current 737 models, 737 MAX fuselages are manufactured in Boeing’s Wichita plant and shipped to Renton via rail. 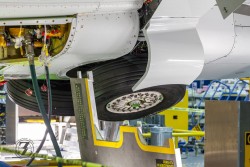 Landing gear was being tested during the media tour – the hydraulics are surprisingly quiet. 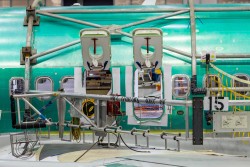 Overwing exits in the open position on Boeing’s No. 2 737 MAX aircraft, which is destined for its flight-certification program. 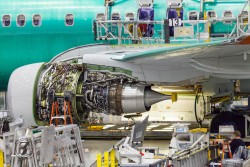 The existing 737 production lines are still producing jets at a rate of 42 a month. 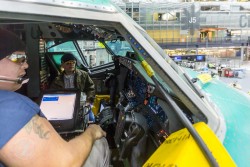 Workers testing cockpit equipment in the No. 2 test aircraft for the 737 MAX program.

On the first day of 737 MAX tours, AirlineReporter writer Francis Zera was able to to head inside the Boeing 737 MAX factory to check out the new production line. One of the coolest parts was getting a sneak peak of the new flight deck. 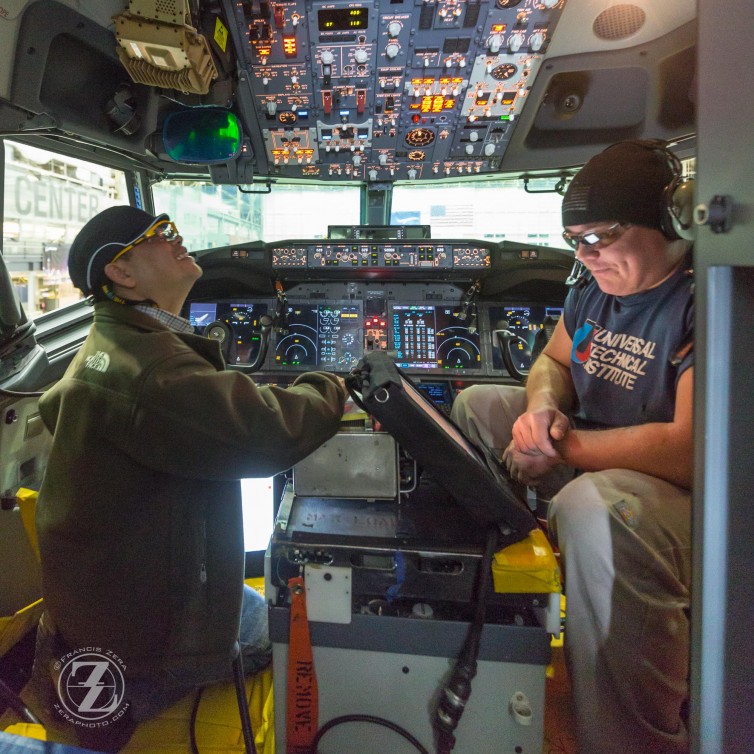 Workers testing cockpit equipment in the No. 2 test aircraft for the 737 MAX program.

The MAX’s flight deck will not have many updates and it will keep commonality with the 737 NG. This will make it easy for pilots to transition from one type to the other. One significant visual change is the addition of four large 15.1-inch LCD displays that will relay critical flight information to the pilots. 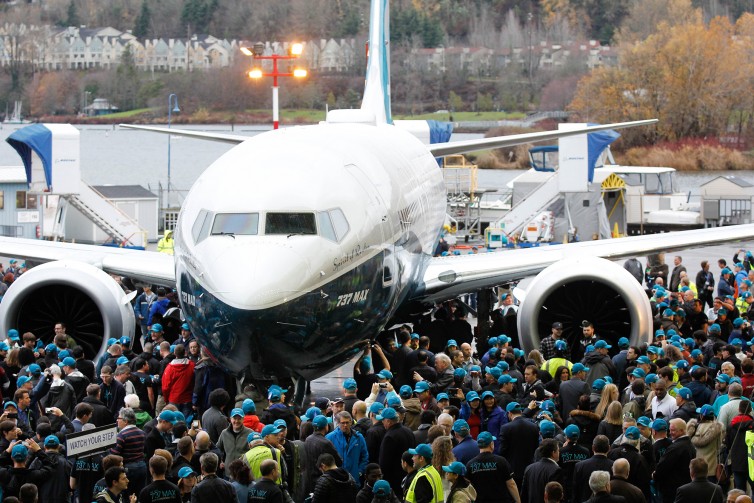 Employees celebrate the roll out of the first 737 MAX – Photo: The Boeing Company

On the second day of the event, Boeing had the official “roll out” of the first MAX, called Spirit of Renton (named after the city it was built). I put “roll out” in quotes, since the plane was outside and it was more like people “rolled/strolled out” of the factory to see it.

After media had their chance to get early morning photos, we left, and then thousands of employees were able to celebrate their accomplishments (you can view a bit of video of it here). It is always great seeing the people who worked so hard on an aircraft, experience it (almost) finished. Not to mention they all got some pretty slick hats too! 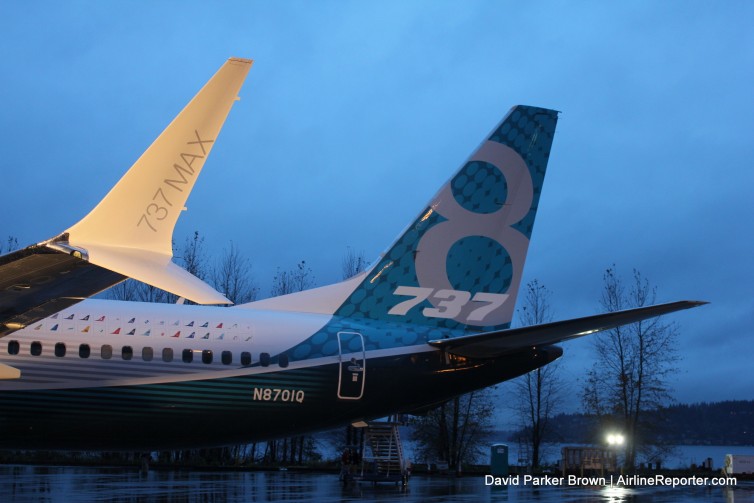 The winglet on the first 737 MAX

737 MAX: About that Advanced Technology winglet…

So, let’s talk about the winglet on this thing. It is freak’n cool. When I first saw a mock version of it on display at the Farnborough Air Show, I was in awe. Yea, yea winglets save fuel, blah, blah, but this one also gives the historic 737 a little sexiness. And that sort of sex appeal deserves a much better name than “Advanced Technology winglet.” Zzz. 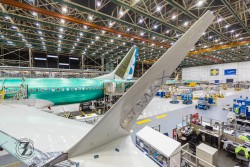 What designs will airlines put on these winglets? 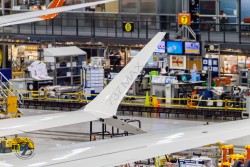 A noticeable difference from the cabin too.

Is an airline going to choose the 737 vs A320 because of a winglet name? I surely hope not. But is it good to have passengers loyal to a brand? Of course. Companies spend millions (if not billions) of dollars on marketing to get people to connect to their brand. For most, the only way they will tell the different between a 737 NG and 737 MAX will be that winglet. When your kid is looking out the terminal window and asks, “what kind of plane is that?” You don’t want to be like “it is a 737 MAX, you can tell by the Advanced Technology winglet there son.” I think they can do better and it is not too late! 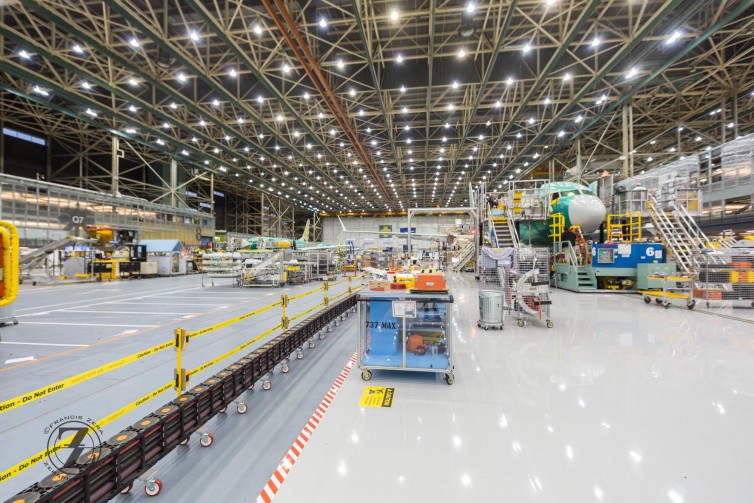 The new MAX line (right) is adjacent to the existing line (left).

How about a campaign where people suggest new names, and then folks vote on their favorite? Boeing did it with the Dreamliner name, so seems easier to do a winglet. I know many people who would be more than happy to help! To get the ball rolling, I asked our Twitter followers for potential names and here are just some of the suggestions: 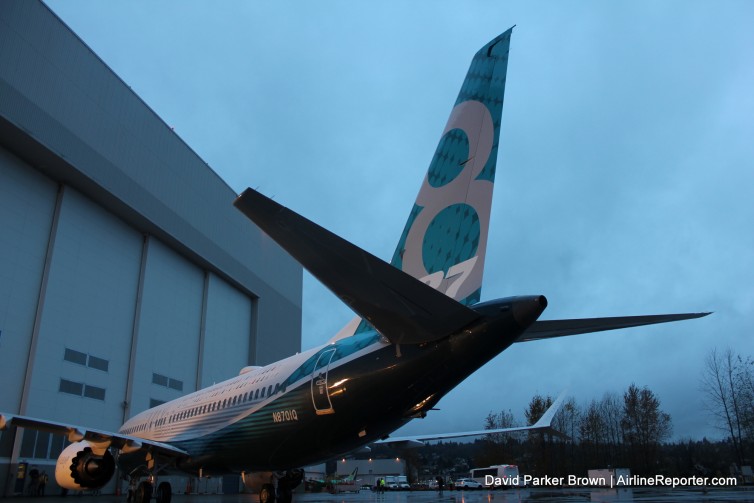 Will the Boeing 737 MAX revolutionize the market? Nah. It is evolving it however. And small, cost saving, steps seems to be what airlines are looking for right now, to replace their aging fleet.

As Boeing celebrates their 100th anniversary, it is inspiring to know that the 737 was a major player during the first century and will continue to fly millions of passengers well into the company’s second century. Heck, the 737 itself could end up serving passengers well over 100 years — and that is beyond impressive.

VIEW MORE OF OUR BOEING 737 MAX PHOTOS ON OUR FLICKR.

Francis Zera contributed to this story.

Nice to see Boeing after decades finally change the APU Exhaust on the 737.
As for the Winglet name DYNAERO, Shortened for -Boeing- Building Aerodynamic Perfection.

I like that name too! Actually quite a bit :)!

That is a good question. The 40% is external noise reduction that would be experienced around airports during the plane’s normal operations.

Darn! I took Alaska first class for the first time recently and I was surprised by the amount of wind noise in the first class area.

They are quite the same with the numbering, but just a play off “maximum.” If you say that the highest is seven, it is weird to also have eight and nine. I know it is just marketing and naming, but a bit of a dig that I am still not a huge fan of the MAX name.

why not a totally new composite fuselage and wings airplane?

A total re-design is being looked at by Boeing and they originally were aiming for that. However, with all the issues with the 787, and the popularity of the A320neo, Boeing decided to go with the MAX in the short-term. We should see a re-design, but it will likely still be a while.

The 737 NG has a version of this winglet too (Just look at Alaska). You will need to look for the round nacelles with chevrons or the redesigned APU exhaust to distinguish between the NG and Max.

The scimitar winglet on the current NG tapers a lot more than these though. Probably not much difference for the uninitiated, but fairly easy to spot the difference if you’re around them much.

I think it is interesting to note that even with all the subtle and not so subtle design changes, it looks like the interior cockpit design stilluses the pattern cutout for the old “eyebrow” windows! No window but it looks like they only threw an AC vent in the space.

Ha! That is a good catch.

Greetings from the Midwest, where those fuselages are built. We formed a watch party and somehow missed them on transit by rail through Kansas City, MO. Had we managed to catch them, we’d have scored rights to say “I spotted that before it was even out.” Haha. Excellent story and photos. Looking forward to following the continued development and getting aboard one once Southwest begins flying them in the not-too-distant future.

The 737 is the worst jet aircraft for loading cargo. The cargo bins are long and can accommodate between one and two hundred bags but can not accommodate the average size baggage handler comfortably and it it really takes a toll on their back and necks. Why can’t they make the fuselage a little bigger like the 757 and still be more efficient ? Another thought, you really think the airlines will “pass the saving on ” ? In today’s market of record profits they are still charging outrageous Ala carte fees for everything from check bags to window and aisle seats and snacks while offering half a soft drink .

I know it might be tight down below, but making it any bigger would take a lot of development costs and then there would be more weight, causing operation costs to be higher too.

There is quite a bit of competition in the airline business. So when costs are lower for fuel, airlines can better compete for lower prices to win over passengers. Not always the case. But remember they are also a business, with VERY small profit margins. They are allowed to make profit.

I have said this before but I find the fuselage too narrow on this aircraft and will Boeing change it ? Hell no just squeeze more passengers in. I agree with Jack loading bags must be a nightmare compared to the A320 and its containers must turning aircraft around much slower than the A320. Time is money after all

Although I agree that I much rather fly a narrow-body versus the 737 on some of these longer flights, width and size is weight, which costs money. It wouldn’t be cheap, or quick, for Boeing to just make the 737 wider. I know they are looking at other future options, but for the time being, we will continue to see the 737 and A320 families fly passengers in their 3-3 layout.

Please tell me this max finally has a roomier flt deck like the 757/67. I’m tired of wearing knee pads to get in and out of the classic and ng’s squeezing around the center counsel.