Microsoft Paint is how I do all my graphic design. It’s clearly good enough for this new airline – Image: Avatar Airlines

Have you ever wanted to invest in an airline, but get nothing in return? I sure have.

Ever wanted to pay for a job interview to be a captain, first officer, or flight attendant? Oh, of course; you had me at the complete lack of employment guarantee!

Well, then I have an opportunity for you: Avatar Airlines. And if you act fast (like serious, because who knows how much longer they will be allowed to exist), you can buy your way into getting way over-priced trinkets at HelpAvatarFly.com! 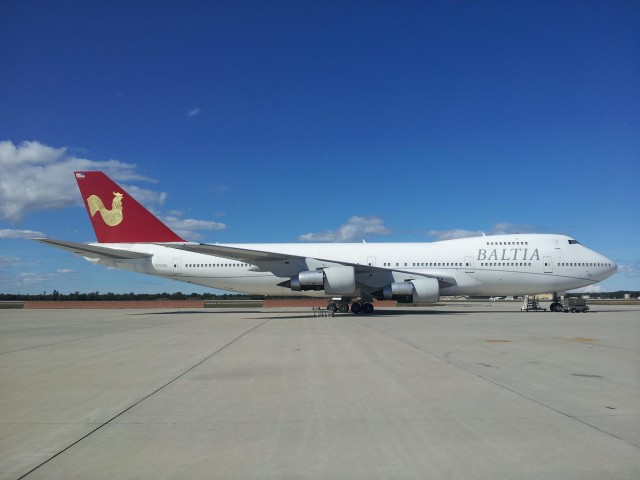 At least they have a real plane… sort of – Photo: Baltia

You heard it here folks. Remember Family Airlines? Remember Baltia? Complete fixtures in the aviation landscape of America. Why?  Because they’re both in the 12thofnever alliance. I often fly Family Airlines to New York before flying the “golden cock” Baltia across the Atlantic. Truly amazing. Oh wait, no I don’t. Because neither of those airlines will ever exist (well, Baltia sort of — for now), except in our hearts.

But maybe Avatar Airlines will be different? At least if you invest in this airline, you are likely to get something in return (like a t-shirt). But let’s take a look at how Avatar differs from its past and non-existent competition. 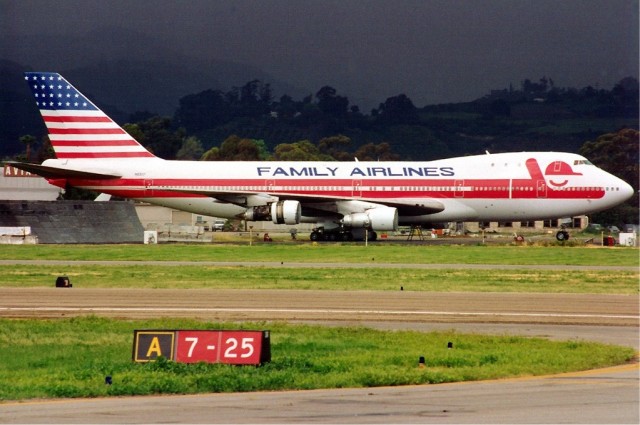 The story starts before Avatar, with Family Airlines. This is pretty much a re-birth, with a shiny new name and less in-cabin smoking. Their argument, per their press release, is one that would make anyone who has some common sense about airlines scratch their head and cry.

By utilizing Boeing 747-400 planeswhich are able to carry four times as many passengers as the typical 737as well developing other profit centers, Avatar Airlines will be able to drive down the cost per seat mile without charging passengers additional fees for items such as baggage (up to two) or Wi-Fi. Additionally, Avatar Airlines plans to offer passengers the opportunity to pre-order in-flight meals and beverages online and offer businesses branding and advertising opportunities. Under this visionary model, Avatar Airlines’ fares are projected to be 50% or lower than current carriers, thus making travel truly affordable. Sample fares would include: Los Angeles to New York, $79; Las Vegas to Los Angeles, $19; and New York to Miami, $49**.

Where do I even start? This just cannot happen. First, where do you get the 747-400s? Is the goal is to, seriously, fly them around the continental U.S.? Where will the Air Operator’s Certificate come from? Where do you get the passengers? You, simply, cannot offer a compelling schedule with such a large plane, trading capacity for frequency, and hope people will fly you. Well, unless you are only going after the most price-sensitive, but then, what about overall trip cost?

Okay, so let’s say that you have a full 747-400. The unit cost will be very low, but that doesn’t matter one iota when the introductory fares are starting at $19 with free baggage (and maybe even WiFi). Where is the unit revenue? Oh right, there isn’t any. Maybe by pre-booking meals? Offering confusing advertising and branding opportunities. Nope!

Those will not cover the sheer cost of paying captains a starting wage of $220,000 per year, all the fuel, all the costs. Do these people know how expensive running an airline is? Guessing no. But do they really plan on running an airline? My guess is still no. 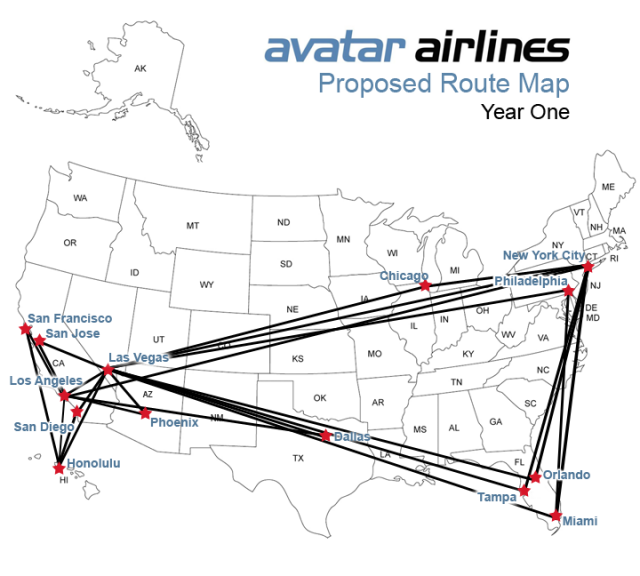 Maybe they’ll be plying business-hungry routes that have been seeing sky-high fares since industry consolidation came into full-swing?

Nothing says high-yielding traffic like San Jose to Orlando via Las Vegas. So that is another “no.”

Do they have any, coherent, destination growth plans? Assuming they get to the second year, here’s what will happen: 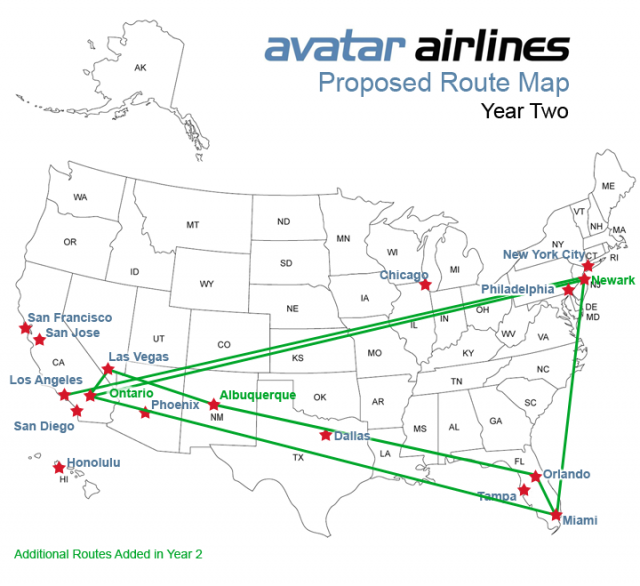 Wow, those routes totally have sufficient passenger enplanements per day to take a 747-400’s worth of passengers. That sweet RASM. Why has no one ever tried this idea before?! (I am hoping you feel my sarcasm – heavy, heavy sarcasm – by now).

Because flying to even more low-yield destinations is exactly how you make a profit with a 747-400. Also, where are they going to get all these 747s from? They’re cheap, but they’re not free. 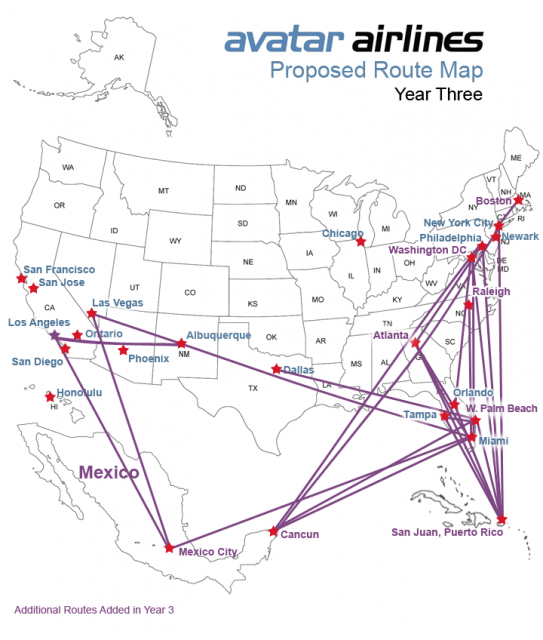 Let’s be real, this is just here as filler. I will eat a hat if it does come to be – Image: Avatar Airlines

I’m at a loss here. The only way the FTC can’t shut the crowd-funding down right now is because if they reach their goal, they’ll deliver the tangible goods. But things like lounge memberships? Where will the lounge space come from? What exactly will “Office Class” be? How many classes of service will they offer?

Eh well, at least these folks amused me for half-an-hour. Actually. This gives me an idea.

Maybe I should crowdfund my own airline. We’ll offer all-Tupelov Tu-154B service around America. Maybe even into Canada. How about from Paine Field to Boise?! Yeah, we’ll all be rich! Just donate money to me now and I will make you a captain. No experience needed (and just for the FTC, know that I am not really offering that). I will probably even have a better photoshopped image [don’t worry, I took care of that for you Bernie. You are welcome. -David].

BernieLine$ USA? Shut up and take my money!

Excellent article!
The chairman and founder has multiple felony convictions for violation of SEC rule and fraud.. but of course this time it’s a new day!

Richard sorry you find a need to leave comments like this after being an Avatar executive. What Richard said is true but that was over twenty years ago and since then I have earned two additional university degrees, including a Master’s raiseded two great daughters, ran for United State Congress and started several successful businesses. I’m a believer that you only fail if you quit, that’s why those who know me, know Avatar will fly.

Yeah, that Master’s sure is paying off…

Bah! If Avatar REALLY wants to get low cost per seat miles… go with an A380! After all, in between Skymark and Malaysia, there are a few lying around. 😉

Well, I’m thinking of starting my own Airline too , using Lockheed L-1049 & L-049 Constellations and Lockheed L-188 Electras , all Propliners from the good ol’ days !
My New Vintage Airline is called “Crash Airways”, where our motto’ is, we’ll get you there, if, we don’t Crash beforehand !!!

You’ll have a Crashing Good Time !!

Thank You, Your Inexperienced Captain ~ !!

I loved the *vintage* stock footage in the YouTube video they made. Looks like an airline ad from 1985.

Bernieline$ USA? Oh man! Your regional subsidiary could operate Yak-42’s out of Olympia Regional Airport to even more destinations you’ve never heard of. I’ll book my next ticket to nowhere on Oly Xpress!

No planes, no pilots, no mechanics, no flight attendants, no gate personnel & no ramp space or gates at any of the airports they plan to go to. In addition, no FAA operating certificate, which takes YEARS to obtain. Other than all that, it’s a great airline. BM should be sent back to prison for this repeat scam.

What gets me more is investors keep falling for it!