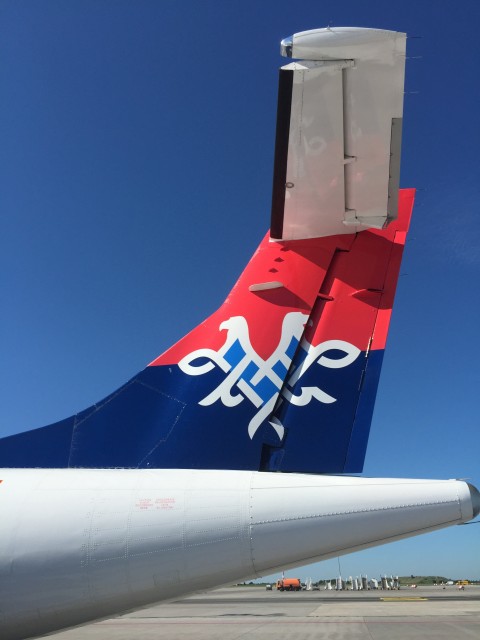 No matter where in the world, when you fly economy on a small turboprop, you likely are not going to have high expectations. This will just be some basic transportation to get from point A to point B. I was shocked when I recently flew an Air Serbia ATR-72-500 from Prague to Belgrade.

Often, flying in Europe can be an even-less-pleasant experience than flying in America. When I landed in Europe, after my not-so-stellar international experience, I said to myself, “I bet you Air Serbia can beat this.” And they did! 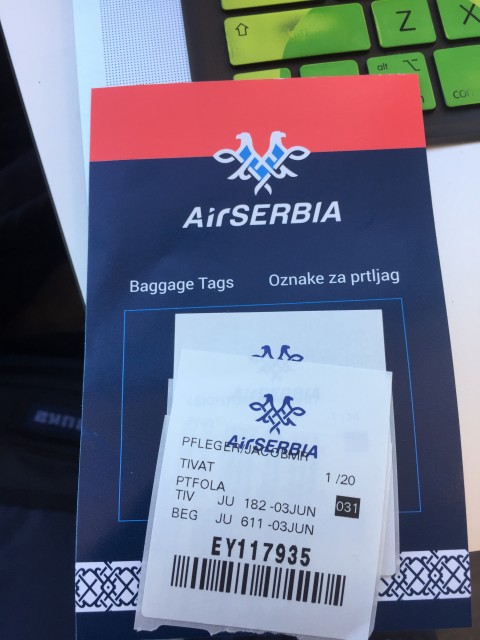 In the morning, I made my way back to Ruzyne to check in for my Air Serbia flight, JU611. This is not a short ATR-72 flight (at around two hours). Lately, Air Serbia has been operating ATR-72-500s on the route, but it is not a certainty, as they have one -200 left in the fleet. Neither type has a premium cabin.

Being ticketed in Business Class on the next segment (Belgrade to Tivat, Montenegro), I made my way to the premium check-in desk. CSA handles the check-in duties for Air Serbia in Prague, and they lacked some of the fineries of proper Air Serbia employees. Namingly, all that was placed on my bag was a sticker that read “urgent/transfer.” It gets the job done, but I was hoping to take a gander at the priority tags, which look much more impressive and makes one feel they are getting a higher level of service. 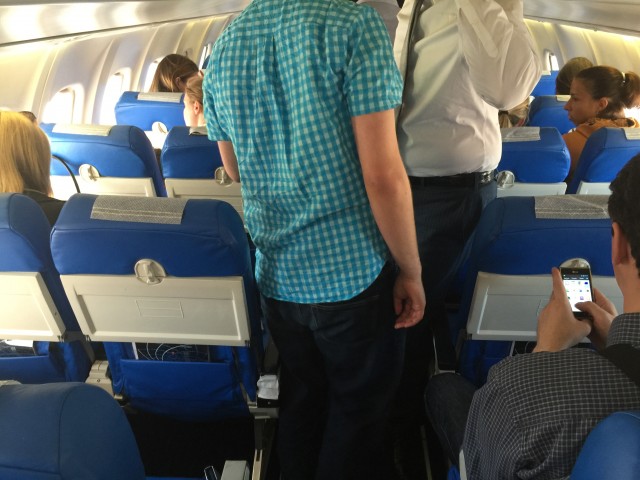 This Air Serbia ATR-72-500 has yet to be equipped with the new interior, unlike its sister ship YU-ALV – Photo: Bernie Leighton | AirlineReporter

After a brief stint in the Mastercard Lounge, it was time to go through the “at the gate” security. I am not a fan of this type of security, but it’s not Air Serbia’s fault it exists.

The flight was quite full with 67 of the 70 seats called for. That is a great thing for the airline, but it made it a bit of a pain to all pile into the bus, wait for the manifest to be printed, and have authorization to leave the terminal.

Those are the only slightly frustrating things about my Air Serbia experience, and none of them are really Air Serbia’s fault! 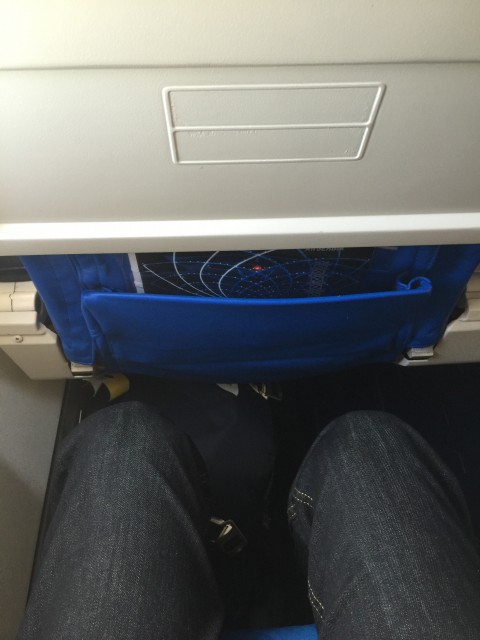 I’d say Air Serbia had about 32″ of seat pitch on their old ATR interior. Quite impressive for a turbine – Photo: Bernie Leighton | AirlineReporter

I was quite impressed with the generous seat pitch. It was almost as much as other domestic business class products that I had recently flown.

With had perfect flying weather. Engine start was identical to every other ATR I have ever flown on — much too quiet and sedate for me. No jets of flames, no high-pitched whines. The air conditioning packs kicked on with them, cooling the plane down to a comfortable level, which is always a nice welcome. 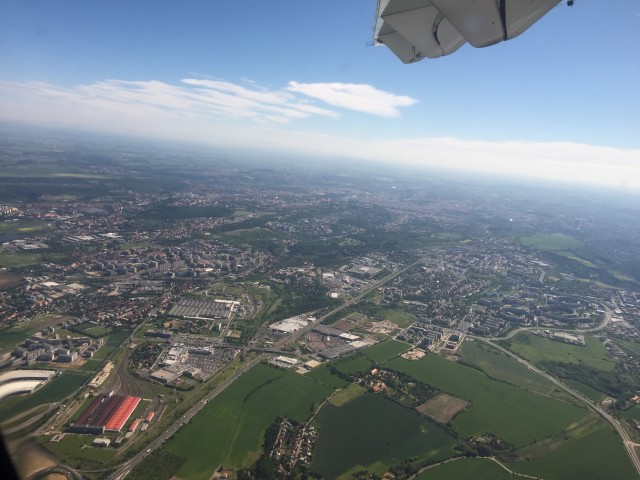 As we ascended over the Czech Republic, we eventually reached our cruising altitude of 22,000 feet. The pilot came on the PA to give us an extreme amount of detail and information of our flight (even the outside air temperature).

I also noticed the cabin crew pushing two carts towards the front of the aircraft. Why? What possibly could an airline offer us on a two-hour, all-economy, turboprop flight? 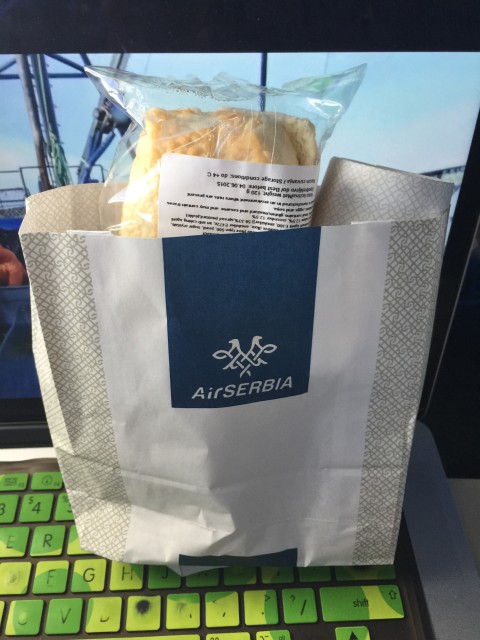 I was given a bag and was curious to what could be inside. It looked (and felt) substantial for this type of flight. Like an eager kid, I looked forward to discovering what was inside. 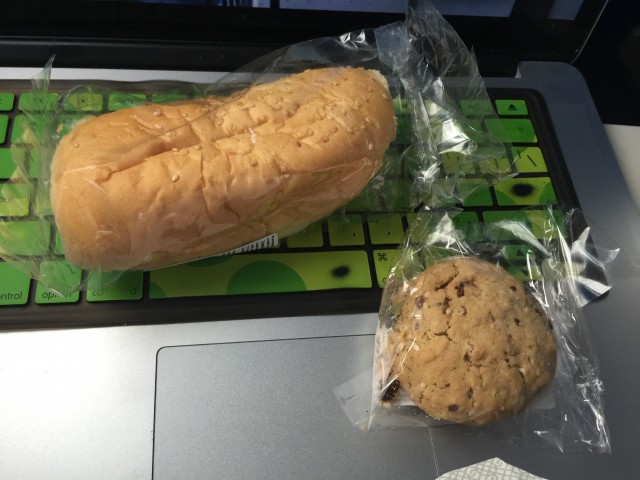 When was the last time you got a sandwich of that quality and a cookie on any short-haul economy flight? Photo – Bernie Leighton | AirlineReporter

It was nothing revolutionary; a roast beef sandwich, a cookie, and also a bottle of water.  Interestingly enough, there was also a branded paper cup for tea or coffee. Makes the serving of such beverages a bit quicker. 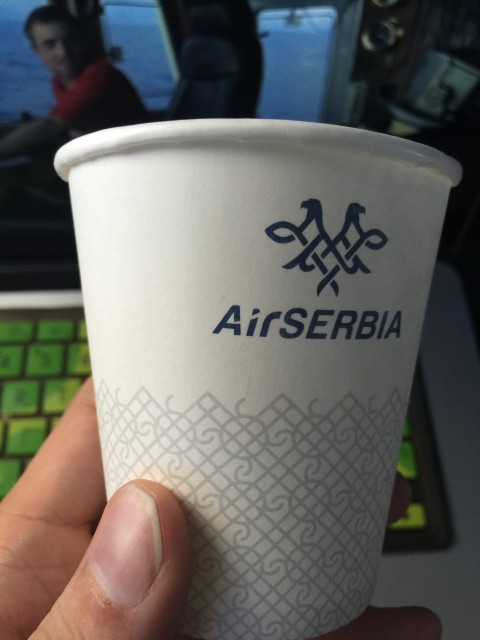 I was thrilled, but the whole flight I kept thinking “why can’t all airlines be this good?” Sure, Aerogal/Avianca Colombia came close – but this is in another universe. This is an ATR! This is the care they put into an ATR.

There was another service closer to landing. Are you listening, airlines of the world? Please, please, tell me you are listening! This is how you should do things. Look how happy I am! 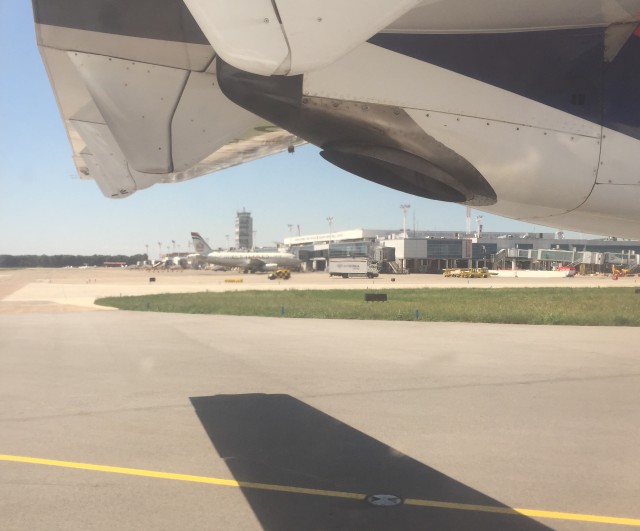 Descent into Belgrade was perfect; there was a bit of a crosswind to contend with on short-final approach, but still a perfectly-smooth landing. This flight was amazing, but on landing, I was met by a lovely woman named Ivana. She was here to escort me through the airport for my next flight. Which, pretty much, broke my mind.

If I’ve convinced you at this point that Air Serbia is already, just wait.

Thanks for sharing Bernie.

It’s always beneficial to see how other airlines go about their business.

I have flown with Air Serbia recently from Zagreb to Belgrade and Belgrade to Stockholm and it was a super great experience. The meals were great but the free beer was awesome. And the stuff was turbo polite 🙂 This is why i’ll fly with them again. Cheers

Constantly flying destinations Brussels-Belgrade and can say that AirSerbia is the company where you feel relaxed and pleasant. The staff is very pleasant even though I saw several situations where passengers were extremely rude.

Keep on doing a great job guys 🙂
Greets from Belgium

I traveled with airserbia in business class from stockholm to thessaloniki and back.
The service was best the staff extreamelly nice the seats was wonderful the food exelend
And the price?just half price from other airlines.Lufthansa aegean austria turkish airlines 8500 kronors air serbia 4900 kronors
I love airserbia

I few before when it was Jat I hated that name. Like the new logo and look forward to flying back to Serbia in the new company, hope I get good service like you described 🙂

Finally Serbs proving they can do it right…….they only needed the opportunity!

I flew SAS from Bergen to Manchester in 1-C — their intra-Europe business-class that’s labeled as premium economy. I had most of the entire premium economy section to myself. Sure, the plane was an old 737-600 that was beat up and threadbare but the service was top-notch for a one-hour flight. A meal, drinks, coffee and friendly, prefect English from blue-eyed, blonde hair Nordic flight attendants.

We flew Paris to Belgrade and back on Air Serbia. It was by far the best experience since the airlines initiated all their service cuts! Well done Serbia

I flew with AirSerbia from Vienna to Belgrad (and back) and everything was so great!!!! I recommend AirSerbia to everyone 🙂 The meal was excellent though! The stewards were totally friendly and I could not be more satisfied!

I flew AirSerbia from Belgrade to Amsterdam. As someone mentioned earlier, flight and staff were great however some other international travelers (not Serbian) were incredibly rude. Love the logo, food was great for a short flight and attendants were very easy on the eyes!

Thanks for great info. I recently flu AirSerbia for the first time and surprised how good flight is. Not a low cost, all included . And flight very smooth. They really can be good option for Europe flights.

well , new boss new rules. AirSerbia is owned by Etihad. Most modern planes leased. Will be nice if AirSerbia continu this way up. Since , there is always risk that initial (marketing) entusiasm blows down with the time. Remark on gate scanning: for sure it is upleasent for average passenger, but this is extra safety factor. Unfortunately , they remove scanners from airport entrance, as used to be in 90′. Quite opposite to some i.e Tunisian airport with only one scanner on airport entrance. Just compare nuber of staff-only doorways after gate entrance vs airport entrance!