Last year, I wrote about visiting Honeywell’s facility in Redmond, after which I got to spend an afternoon flying with their crash test dummies. That, however, only covers the activities of Honeywell Aerospace in Washington State.

Honeywell has a large presence in Phoenix, specifically at Deer Valley Airport. At one point this was the legacy of Sperry Electronics, which got its start making gyroscopes for Curtiss biplanes. They even had a rudimentary autopilot demonstration in June, 1914.

So, what does this have to do with Honeywell? Well, prior to their purchase by Honeywell Aerospace, Sperry developed the first Flight Management Computers (FMC). The best way to describe an FMC is that it’s a layer above the autopilot and allows for a degree of pre-planning and programming for the aircraft’s mission. Flight Management Computers have evolved to a level most of the old Sperry guard could never have imagined, though the form factor has remained relatively the same.

Honeywell Aerospace is not known for sitting still. Much of their avionics technology hangs out on the bleeding edge. The thing is, airlines and their associated airframers tend to demand low cost AND reliability. Flight deck and avionics design usually evolves within corporate aviation. It is no wonder, then, that Honeywell and Gulfstream work so closely to develop an integrated flight deck and avionics suite. The internal name of the Honeywell avionics and flight management package is Primus Epic.

While it is also at home on a Falcon 7X, Dassault puts their own special finishing touches on it so that it better matches their ecosystem. We’re not talking about Dassault today- we’re discussing Gulfstream- so the Honeywell system is marketed as PlaneView.

How does one get a good understanding of the practical elements of PlaneView/Primus Epic you ask?

The best way. By seeing it in person by flying on a Gulfstream G650 and who am I to say no? 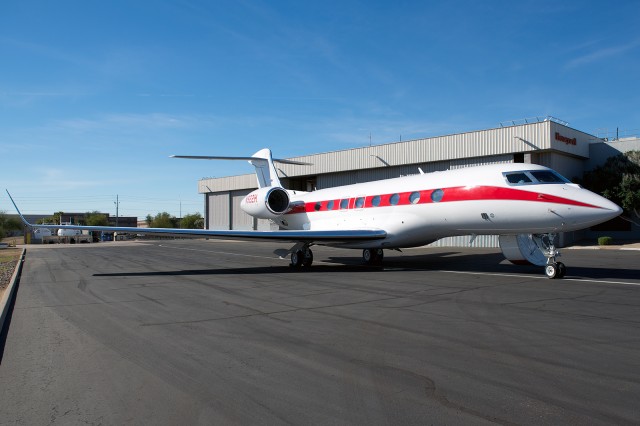 N922H joined the Honeywell corporate fleet in April of last year. It was one of the first Gulfstream G650s and is a wonderful illustration of the partnership between Honeywell and Gulfstream.

If you were wondering, Honeywell Aerospace also produces the engines for the “smaller” Gulfstreams. G650s, however, use Rolls-Royce Deutsch BR725. The BR comes from the dissolved partnership between BMW and Rolls Royce. 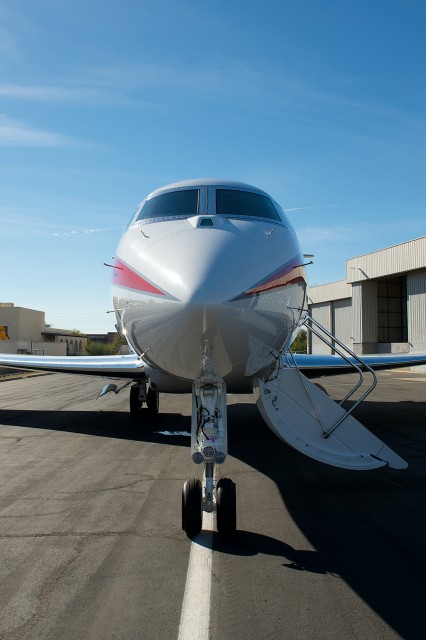 Nose on with the top-of-the-line Gulfstream – Photo: Bernie Leighton | AirlineReporter

To board a G650, one goes up a pair of airstairs that in some ways are extremely reminiscent of the very first Gulfstream. There are lots of little signature Gulfstream items around the aircraft that are of a similar vain. 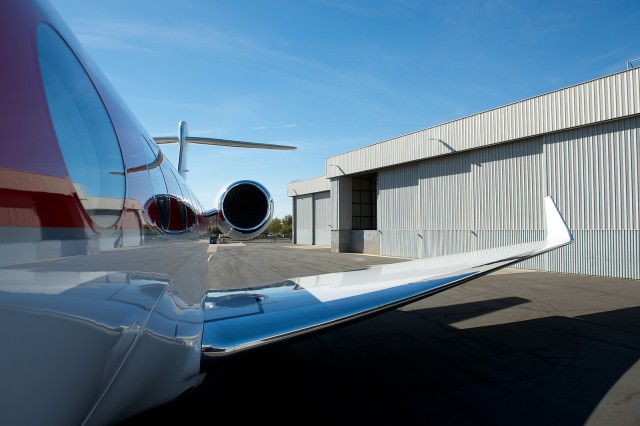 There is no way to describe how this feels – Photo: Bernie Leighton | AirlineReporter

That, however, is where the similarities with the Gulfstreams of the past end. The cabin – though in an executive rather than VIP configuration – is extremely spacious. Honeywell’s G650 is certified for eleven passengers, seated either on first class-style seats, or a very large couch (with adjacent large screen TV). 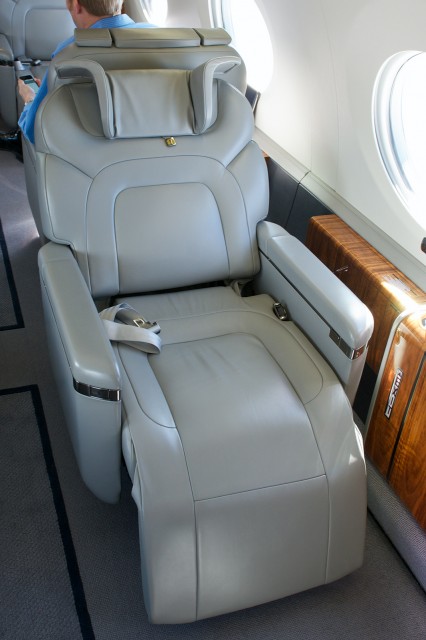 I decided to sit in a forward-facing seat over the wing so I could take some wing-view shots. I would have sat on the couch, but apparently to sit on the couch for take off and landing a shoulder belt is required. If you don’t buckle the shoulder belt, you’re likely to slide into the adjacent couchmates. Not liking the prospect of either, I was happy to remain in a more conventional seat. 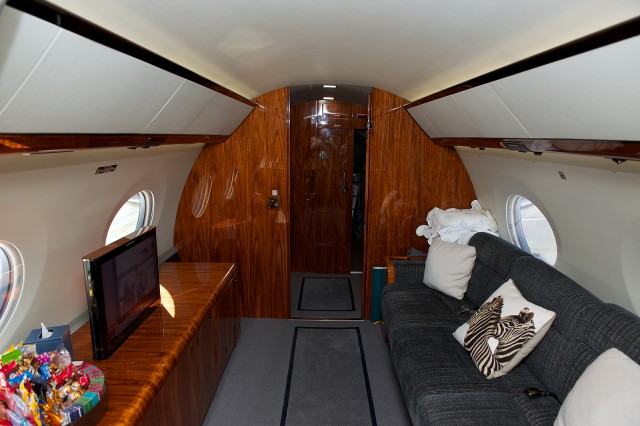 Startup was interesting. The BR725 didn’t sound as much like a jet engine as it did a paint mixer, or maybe a very large lawnmower.

Taxi was equally smooth. There is not a single out of place noise, or rattle in the cabin. There was an ever-present whisper of engine.

Takeoff was one of the most noticeable differences between commercial aviation and executive transport. First off, we were at Deer Valley Airport – a general aviation strip with a runway too short to support a 737. Secondly, even with a de-rated takeoff, you really feel the power. Note, I do not say hear. In fact, I did some quick measurements for comparison.

On my flight from Seattle to Phoenix aboard a 737-800, I measured a peak cabin noise of 85 dB during the takeoff roll. This was a peak of 75. Sound pressure is an exponential function; logarithmic, in fact. 85dB is more than twice as loud!

The G650 is an ultra-long-range corporate and VIP aircraft. It has a range of over 7,000 miles, which Honeywell has pushed farther when necessary. It has an insanely low-drag design and an equally impressive aspect ratio (7.7), which makes it climb rather like a rocket sled. Not only that, but the T-tail design and surprisingly high wing loading make it as smooth as a Bentley in turbulence.

Our flight was to Sedona, Arizona, where we would execute a go-around and come back to Deer Valley.

After I unclipped my seatbelt, my first order of business was to walk up for a demonstration of all the things one can do on the flight deck of a PlaneView-equipped aircraft.

There are a lot of features which make it the most exciting flight deck I have seen. Full synthetic vision, forward-looking infrared, a heads-up display (sadly, not supplied by Honeywell), as well as a lovely system of sidestick cursors and buttons to better interact with the flight control user interface.

To paraphrase the test pilot giving me the tour, the goal of the PlaneView system and its RDR4000 radar is to make the pilot a pilot again. For many years, there has been a thriving discussion of what the captain of an aircraft actually is. There was a growing, and slightly annoying, trend amongst avionics futurists to describe the pilot as a “systems manager.”

In other words, he or she was expected to intimately know not only how to fly the aircraft, but every single complex detail of almost every subsystem. That kind of undue stress can keep a pilot feeling out of the loop. The goal of Primus Epic/PlaneView is to keep the pilot engaged, and keep them flying. The general goal of Honeywell flight deck design is to not overwhelm the pilot with unnecessary, distracting information, yet to make sure the pilot can access all the necessary information immediately and in a way that does not reduce situational awareness.

This product is intuitive if you have used a computer in the last 20 years. Indeed, Honeywell’s design engineers would like you to know that they often take cues from consumer electronics.

If you’re a passenger and you do not want to have to move too far to turn up the cabin heat, change the channel on the satellite TV (which only works over North America), or turn on the lights, Gulfstream has an iPhone/iPad app. Yes, there is an app for your G650. It can be used to control lights, temperature, mainscreen IFE, anything you want- really. When you buy a Gulfstream, it is yours.

With Primus Epic in its current form, the pilot has more time to do their actual job – “fly the airplane”. Think that’s pretty awesome? It gets better.

Primus Epic is as up-gradable as the connecting bus bandwidth allows. Want to install a new graphics card for more fluid synthetic vision? Need to replace something to meet a new airspace usage mandate? Gone are the days when you would have to purchase a new aircraft. The limit is not in the avionics and associated processors any more – it is entirely bandwidth related. I cannot get an accurate figure on the bus clock/bandwidth of a G650, but Honeywell assures me that it will be sufficient for a long time to come.

After that discussion was finished, it was time for me to explore this massive executive jet. First, I had a peek into the crew lav. 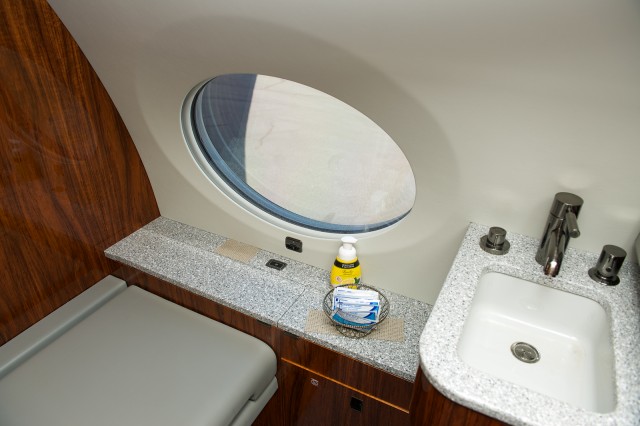 There is also a crew rest cabin. I suppose for flights where crew might time out, a rest area is necessary. I had just never thought of where such a thing went on a corporate aircraft. 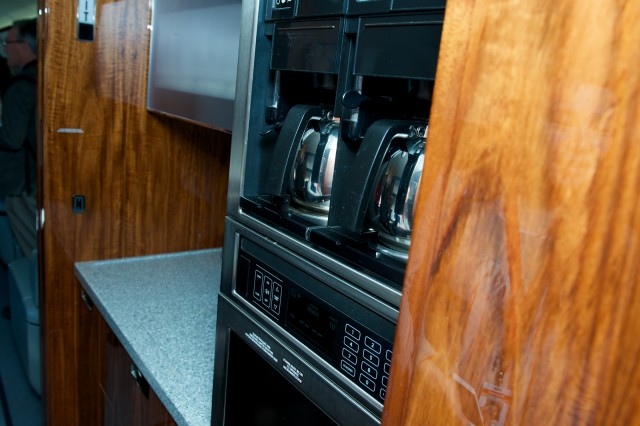 The left-hand side of the G650 galley – Photo: Bernie Leighton | AirlineReporter

With the crew rest, I also noticed that the door disappeared behind what appeared to be lacquered oak veneer.  There is no way you could hear a peep of noise with that in place. It actually took me a couple of minutes to realize there was a door there! 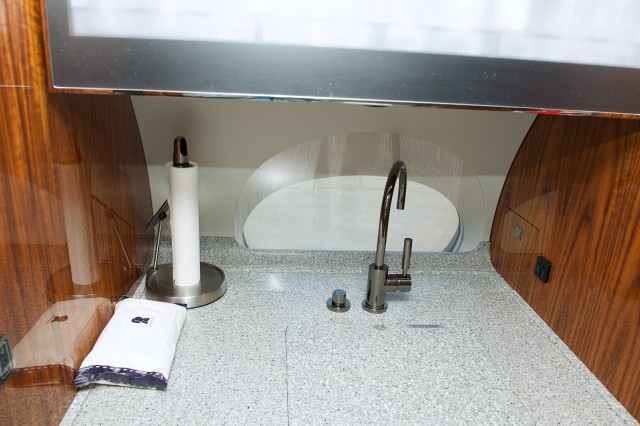 I wish my sink had a view like this. Photo: Bernie Leighton | AirlineReporter

They galley is also very well fitted out. There is a full bar-style sink to go with the ovens and refrigerators. For our (all-too-short) flight, there was a large tray of very good cookies. The catering towards the back was equally appropriate; a bouquet of candy! Honeywell knew their audience too well. 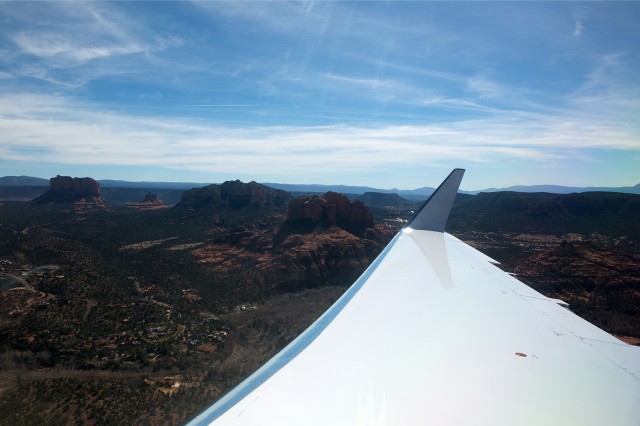 Arizona, aboard a G650, is pretty stunning to look at. Especially on approach into Sedona. Not as stunning, however, as getting to do a go-around in said aircraft. Again, you feel it a whole lot more than you hear it. Sometimes, it feels like a very quiet fighter jet. That was one of those times.

During the turn out of Sedona, I noticed that there was a fully rendered synthetic version of our aircraft and its surroundings, right down to a little monitor that would display the intensity and direction of our turns. I am not sure what I found so mesmerizing about watching a virtual Gulfstream whilst aboard that aircraft, but it was nicely existential. 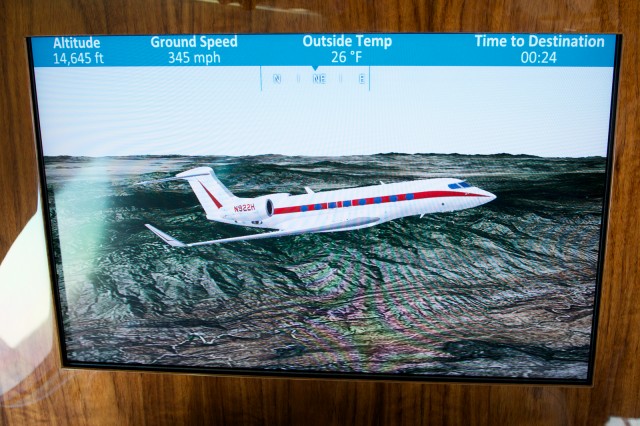 This is the coolest passenger-facing flight information screen I have ever seen. Photo: Bernie Leighton | AirlineReporter

I even found the same view upon removing a TV screen from one of the seats. If it were my Gulfstream, I’d have it VIP-equipped with a much, much larger television. I would certainly say that all of Honeywell’s fixtures were exquisite. 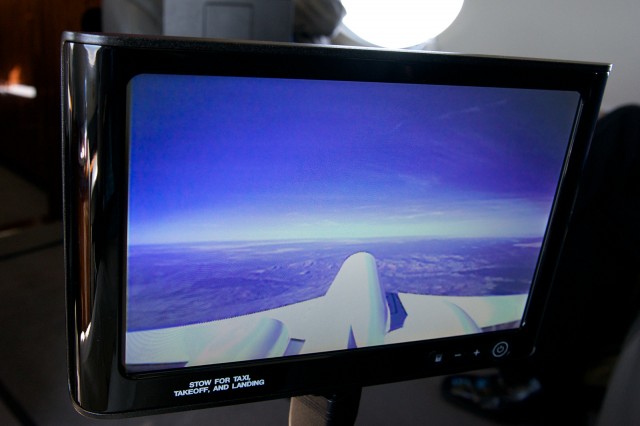 Even the tray tables are automated. 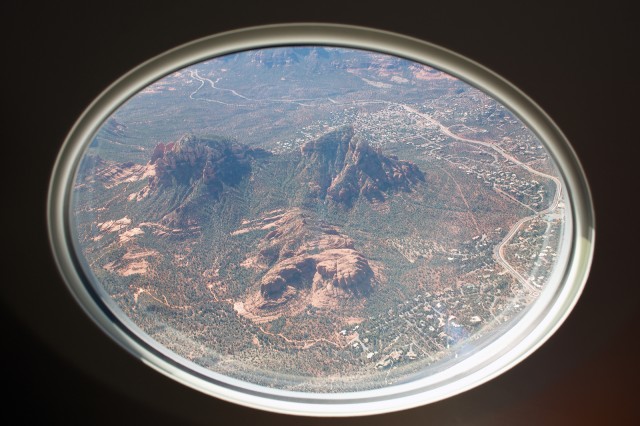 The approach back into Deer Valley allowed us to, inadvertently, experience some convective turbulence. Flawless. Even in situations where the aircraft quickly “balloons”, it feels graceful.

Landing was equally smooth and I cannot even remember if the reversers were deployed. Sadly, landing also meant my first G650 ride was over. Oh well, there’s always next time!

I would like to thank both Honeywell and Gulfstream for making this flight happen. It’s not every day that you get to see what two future-focused firms can produce when they come together with the goal of making the best product possible.

Wow! While the G650 is impressive, the Honeywell human/airplane interface is the real star here. I know a G650 pilot who says that he would gladly return his salary (shhh) to continue flying that wonderful airplane, primarily because Honeywell has put him back in the driver’s seat. Great article and stunning pix. Thanks.