A while back, I viewed a tweet about an Air Traffic Control (ATC) conversation in New York, where JFK ATC got a little bit confused about an aircraft type.  American Airlines (AA) Flight 32 was incorrectly called a ’œheavy’ aircraft, likely because for so long that flight was operated by a Boeing 767-200.  Ever since AA debuted their new Airbus A321 on the LAX-JFK route, this flight no longer needs to use the “heavy” designation, but that didn’t stop the ATC staff from using old habits.  It made me question, at what point does an aircraft become ’œheavy’?

When aircraft are approaching or departing an airport, they must use special designations to help avoid the wake turbulence from other aircraft.  Larger aircraft, like a 767 or an A340, need more space behind them to prevent the wake vortices generated by the larger wing span from impacting other aircraft.  The bigger the aircraft, the longer the distance.

The dangers are real, as all over the world a number of incidents have occurred that can be attributed to a wake vortex.  From the crash of an XB-70 in the 60’s to some involving more modern aircraft in the last 10 years (including an A380 in Sydney). 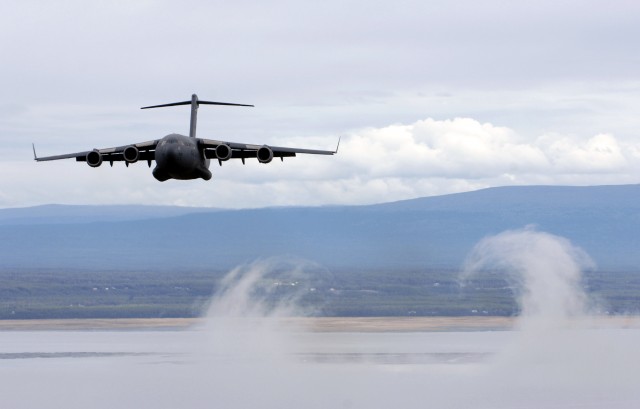 Wake turbulence from an aircraft is caused by a number of factors; the two biggest are jet-wash and the wingtip vortices.  As the wing tip passes through the sky, it can dramatically affect the air around it for a long duration, causing disrupted air for following aircraft.  Jet-wash, caused by the engines of the aircraft, does not last as long; however, it can be more violent.

Want to know how bad jet-wash can affect an aircraft? Just look at the scene in Top Gun when Maverick loses control and has to eject, killing his Radar Intercept Officer, Goose.  That crash was caused by the jet-wash from the proceeding aircraft’s engines.  Definitely not something you would want to go through on a regular basis, right?

Although the FAA doesn’t necessarily follow ICAO rules, the two do have very similar designations.  The ’œheavy’ designation goes to any aircraft with a takeoff weight of 300,000lb or more, even if they are not operating at that level.  So, for instance, any 777 departing or arriving an airport, even if below that 300,000lb weight, would still need to use the “heavy” designation.  Any aircraft below 300,000lb would be categorized as ’œlarge’ (though ATC isn’t required to use that term ).

There is one aircraft that doesn’t quite make it to the “heavy” designation that needs extra space, and that is the Boeing 757.  Since it has many characteristics of a heavy, but without the takeoff weight of it’s much larger cousins, it is given the same separation but isn’t required to use the designator.  But how much separation do they need to give?  Here’s a handy little guide:

So you may notice an extra category in the above table?  The ’œsuper’ designation belongs to one aircraft only – the A380.  With the advent of the ’œwhalejet’ came a requirement for a new code, as the A380 needs a much larger separation distance, especially from smaller aircraft.  I know I wouldn’t want to get caught in that wake turbulence.

I wouldn’t want to get caught in the wake vortex of that A380 – would you?

So next time you’re at an airport or listening in to ATC and hear the flights using the terms “heavy” or “super”, you can know that those terms have an underlying meaning to help keep you and other passengers safe in the air.  Plus, it gives you and idea how long until that next aircraft is going to pass overhead, and you can impress your friends with your random AvGeek knowledge.

Just a slight paradox. With heavy landing slot constricted airports such as LHR, most airlines (EK, SQ) find it more useful to fly A380s with more capacity. But if wake turbulences apply, wouldn’t the longer separations create even fewer landing slots, so wouldn’t it be more plausible to fly smaller aircraft with more frequencies instead?

The flight progress strip (FPS) has a designator to the left of the aircraft ID (ACID) on line two of the FPS. ATC calling a flight a “Heavy” just because that’s what they always called them….not reading the FPS….no “H” designator, no heavy aircraft. The Wake Recategorization program that is being implemented will not only change those designators but in almost every case, will reduce that required separation.

How does the photo of the C-17 Globemaster illustrate wake vortices? The swirly clouds that are lower center and right appear to be between the photographer and the aircraft. What am I missing?

Do wing tips have any effect on the size or strength of the wake vortex the aircraft produces?