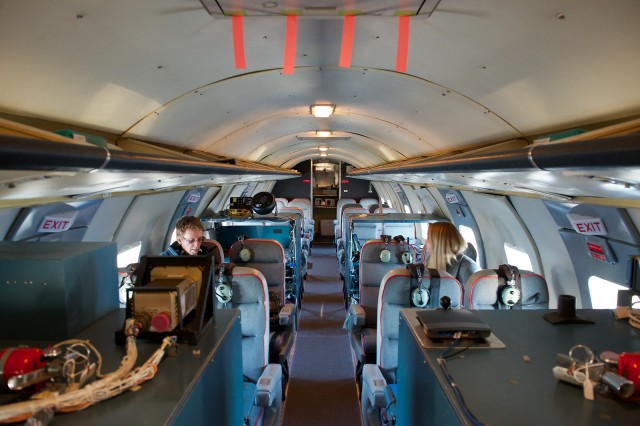 The Convair was purchased from Era Alaska Airlines as they were replacing their Convair 580s with smaller, cheaper Dash-8s. Era also owned one of only two certified Convair 580 simulators. All of Honeywell Flight Test’s Convair crew was trained by them, in Alaska.

Honeywell always has a few more than a dozen projects attached to their Convair, and for a test aircraft it spends a lot of time airborne — three hundred hours a year. During the summer months, they fly the plane under (and into) thunderstorms in Florida to better calibrate their brand-new flagship RDR-4000 weather radar.

Earlier this year, I had the opportunity to fly on North America’s only passenger Convair airline, Nolinor and to say the least, it was amazing. Boarding the Convair was, unsurprisingly, identical to my previous Convair experience. That, however, is about where the similarities ended.

The seating is what one would call an “executive configuration” with ample seat pitch (probably around 40 inches). It was also impressive to see the seating fabric and piping matched Honeywell’s color scheme. 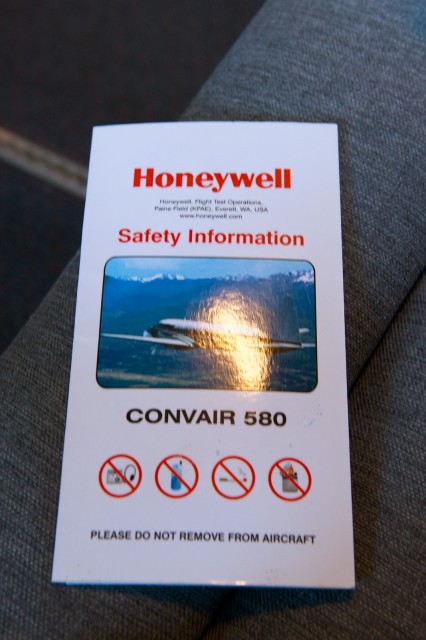 As you can probably see, the aircraft also contains several work benches. These are usually configured with multiple monitors and lots of other mission-specific equipment.

The aircraft is also full of networking hardware, which makes sense, as they need some way of shuttling around the terabytes of data they generate per hour. All of these systems are capable of being powered by the aircraft’s own generators. The only difference between their Convair and others is that it carries a few more inverters. 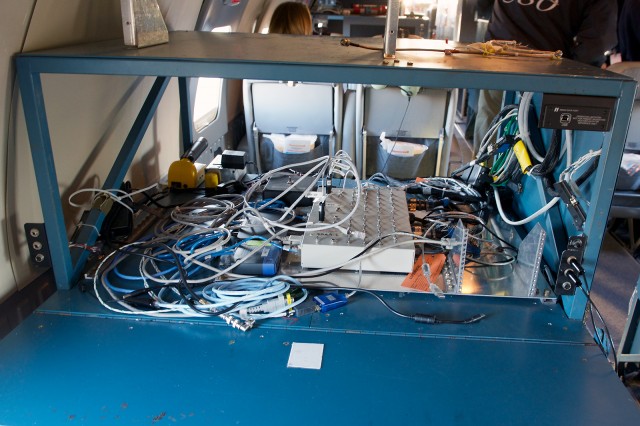 I was free to move about the cabin, so I took that to heart. More than being in a Convair or in a test aircraft, this flight was something extra special for me; I have never taken off from Paine Field.

I have hover-taxied around the PAE ramp, flown over PAE, and even landed at PAE, but I have never taken off from PAE. What a plane to have my first take off in! 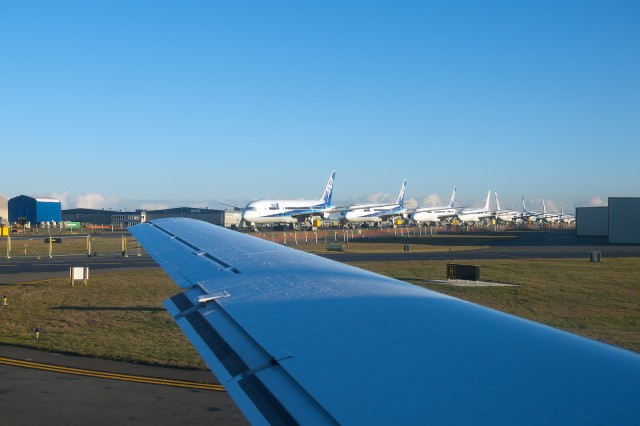 A 61-year-old wing and some 787s; what a contrast! – Photo: Bernie Leighton | AirlineReporter.com

Start up of the T56 engines (and I call them that because the pilots are both ex-military aviators) was another beautiful display of turning fuel into noise. Unlike Nolinor, Honeywell estimates that they only burn 330 gallons of fuel per hour – 25 gallons less than their Canadian counterpart.

Taxi was thrilling. The feeling of being in a 61-year-old aircraft going past brand new 777s and other Boeing products is surreal. Take off was the same.  Since we departed via runway 34L, I could not view spotter-buddies who came out to see the show directly, but I could certainly recognize their cars. I could even see the roof of the Future of Flight. It was also a gorgeous day, even though the light was starting to fade.

Our first maneuver was to sync altimeters with the Sabreliner; this required flying in a loose formation while the two flight crews made sure they were synchronized. In the pre-flight briefing, we were told that they were not the Blue Angels and that it would be difficult to get a photograph of this scenario. They were not wrong. I can tell you that it did look beautiful, though.

The next demonstration was the TCAS. After syncing the altimeters, the Saberliner flew a thirty mile circle to set up with a head-on course. Closing at a speed of over 600kts, the Sabreliner began to show up on the multipurpose screen 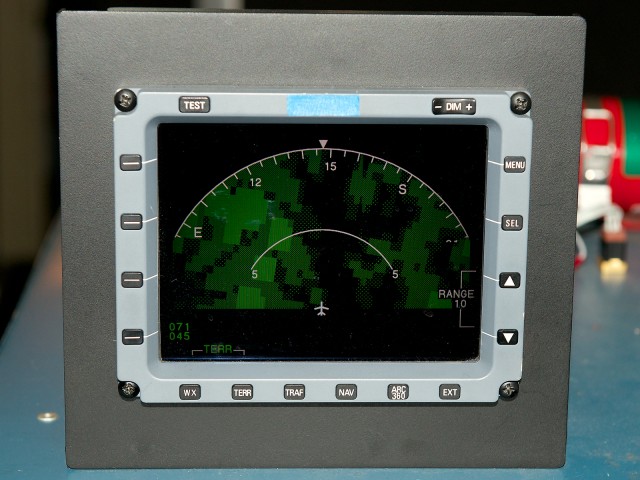 As the business jet closed on us, I walked up to the flight deck to see first-hand what it was like to induce a TCAS alert. While we never got close enough to get a photo of the aircraft, I could see the lights in the windscreen as the TCAS began lighting up.

For demonstration purposes, it was very nice to see an Resolution Advisory (RA) issued as well (i.e. how to not crash in to the other plane). Our pilots acted, and as you can tell, no one was ever in any real danger.

Next up was a test of the EGPWS, with the beautiful Olympic mountains as our demonstrator. 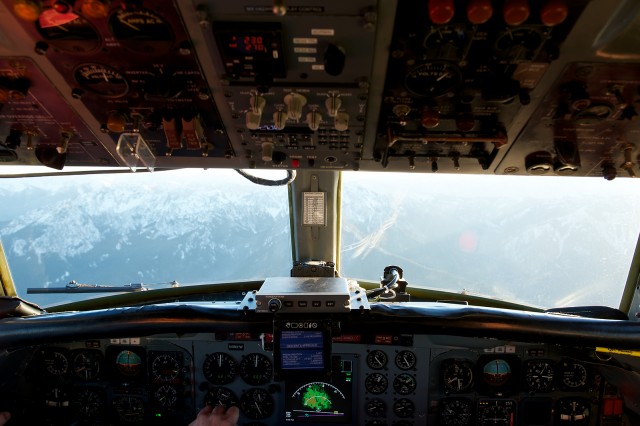 Without EGPWS, this would not be something you want to see – Photo: Bernie Leighton | AirlineReporter.com

Okay, so I may have been riding jumpseat by this point. How could I refuse?! This was my first jumpseat ride ever, and in a flight test Convair no less! But I needed to hear what the warnings would sound like for the pilots.

The aural cues of the EGPWS are much louder than the media would have you think, with the calls of “TERRAIN! TERRAIN!” and then “PULL UP!” extremely noticeable and surprising. I should also mention that the EGPWS system works off of Honeywell’s own terrain database and it is updated regularly.

After taking a run at the Olympics, and living, it was time to head back to Paine Field for our last demonstration – a brief look at Honeywell’s landing performance monitoring system. Some of these features are already offered in Honeywell’s RAAS product, but there are plenty of new features coming that I will discuss in an upcoming article. 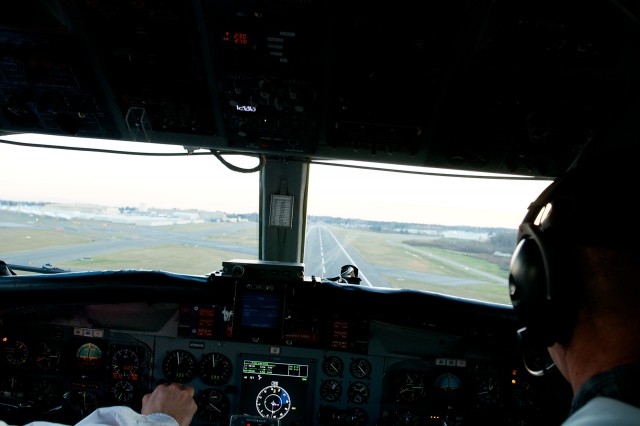 After a go-around, we landed back at PAE. It is amazing how much you can show off with only 49 minutes in the air.

Honeywell’s pilots are extremely professional and skilled; I cannot stress this enough. They were great people to speak with, and even better people to demonstrate Honeywell technology.

Before I drove back home, it was time to check out the Honeywell Museum of Flight properly. 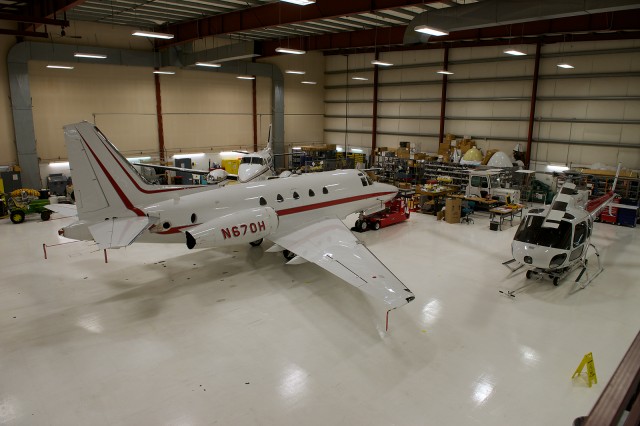 The hangar was very well kept, clean and a testament to efficient use of space.

Honeywell even uses towbar-less tugs (identical to those used by American Eagle) for their flight test jet. 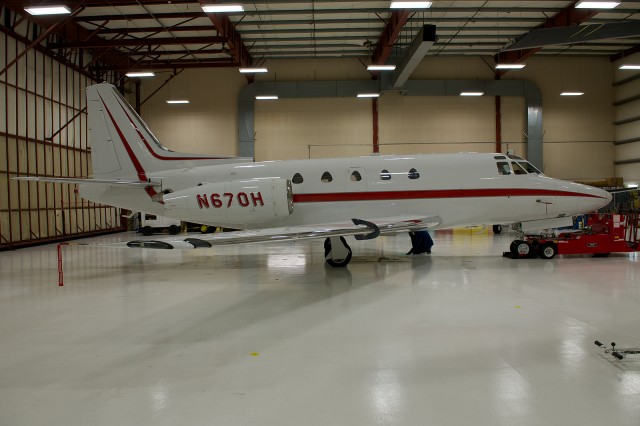 A better view of N670H. Photo by Bernie Leighton | AirlineReporter.com

Honeywell keeps a Eurocopter around for any heli-borne testing they may need. 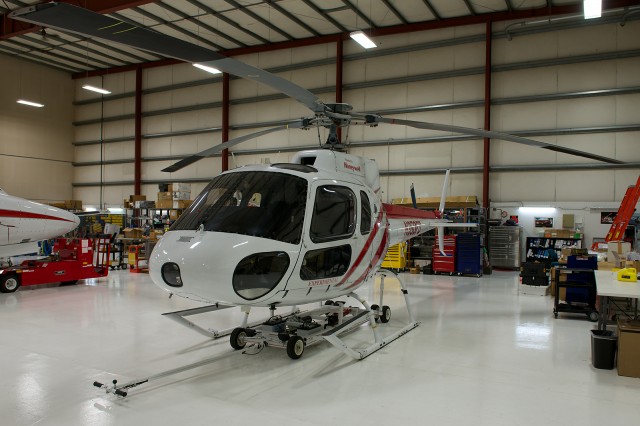 Lastly, it was time to take a look at their Beech King Air C-90, of 1971 vintage, that one of the Flight Test Engineers refers to as his girlfriend — whom am I to argue? 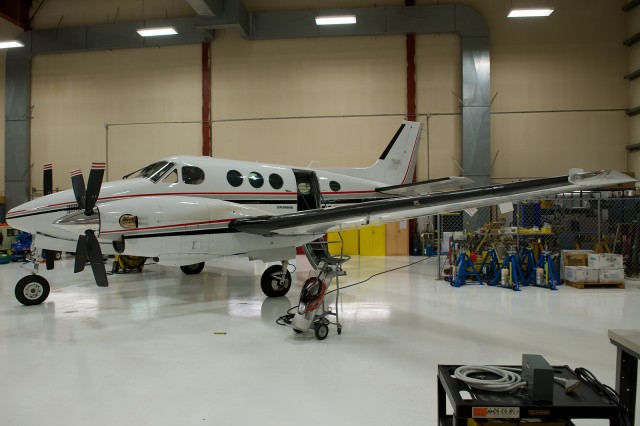 I would like to give a huge thank you to Honeywell and Honeywell flight test for making this day possible. It was an amazing experience and I learned more about avionics in one day than most people ever will!

Stay tuned for my next post which will go way more into technical details about what I learned.

https://www.airlinereporter.com
An Overview of First Class Pajamas From Around the Globe
Delta Unveils a Special “Spirit of Seattle” Livery – Alaska Responds
6 Comments

Great story. Even though I flew the Convair the day before your piece made me feel like I was flying right along with you. Looking forward to enaging more often and additional flights on our test aircraft. Will see what I can do about the G650!

Thank you! That means a lot coming from you.

Hi,
I remember the Convair, thought I never had a chance to fly one. I flew the DC-3 though. The Convair looked a real good aircraft. Wish I could fly one.

The first flight I ever had was with a Convair Metropolitan from SAS from Tirstrup to Kastrup with my dad – I must have been around 5 years old. I still remember the flight attendant take me to see the cockpit (to see all those knobs and dials) and giving me a SAS badge I put in my cap.

This brought me back more than 50 years.

Thank you for this enlightening article, Bernie! Knowing that this aircraft is still flying and that it is lovingly cared for brings me much joy.
As I write this, I am sitting in the United Airlines Club at O’Hare where a large, wall-sized image of United Convair N73102 hangs above my chair. Looking up the registration of this beautiful plane brought me to your article, and to see this plane looking crisp and bright as a 580 model is a testament to the many hours she has to have flown since the image adorning this space was taken so many decades ago.
I hope that she will be flown for many more years!