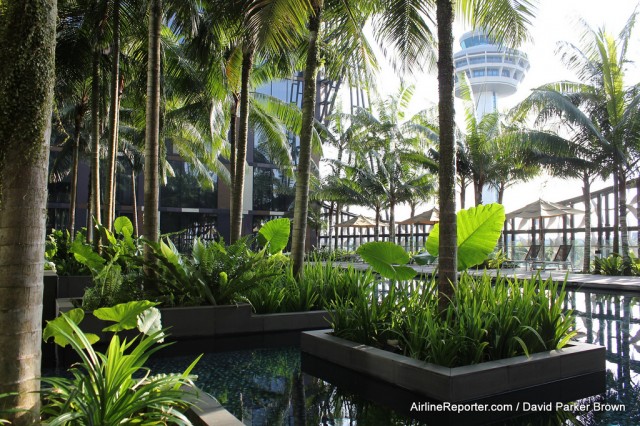 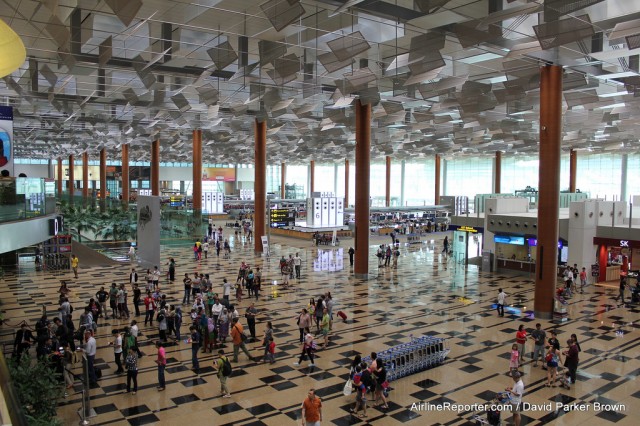 The newer Changi Terminal 3 is open and festive

Although part of me wishes I would have taken the opportunity to head back into the city (at least for the food), I needed to get some rest. In only a few hours, I was to do a live blog of the world’s longest flight and my goal was to stay awake the whole time (spoiler: it didn’t happen).

BONUS: Destination Blog – How to Visit Singapore With No Clue

This doesn’t mean I was not kept entertained. Although I had already scheduled a tour of the airport for the morning before my flight, I decided to check out all the public space in the three terminals. This was a multi-hour task all on its own.

I was glad I still had my scheduled tour ready to go, since I missed quite a bit on my own. 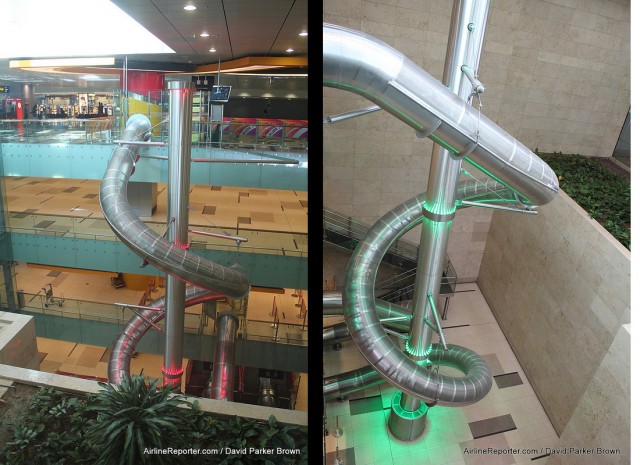 Weeeeeeeeeeeeeeee! The airport even has its own slide. I wasn’t able to give it a whirl.

If a business professional, an AvGeek, and a five-year-old sat down to design an airport to meet many their needs, they would have come up with Singapore’s Changi Airport.

It has all the high-end shopping and business amenities that one would expect in a world-renowned airport, but it also has some pretty rad aspects not seen many other places.

Although there are plenty of fun and games (like a slide in Terminal 3), there are also 350 retail and 120 food and beverage options.

The airport is big – as of now, the combined terminals offer over 750,000 square feet of space. There are more than 110 airlines that operate to over 250 cities from SIN. Changi saw 51 million passengers in 2012 and was ranked as the seventh-busiest airport for international passenger traffic. So there are many passengers with different needs. 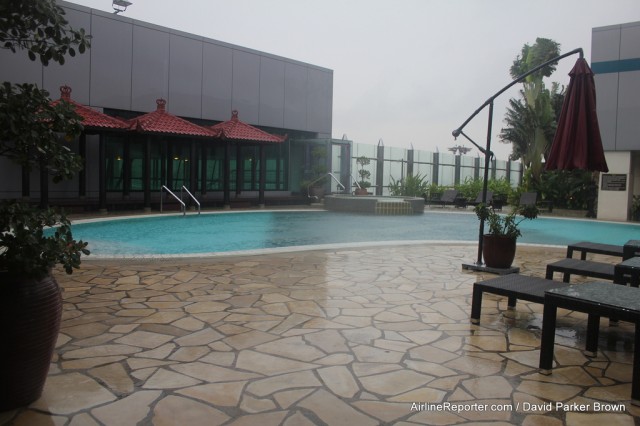 One of those needs might be for a swim in the pool. I mean, who wouldn’t want relax in a pool or Jacuzzi during a long layover. Unfortunately, during my visit, the weather was stormy and no one was in the pool.

It costs just short of $14 to get access, which includes a pass to the pool, a non-alcoholic drink, a towel, and access to showers. Really, that is a great deal just for the showers alone. 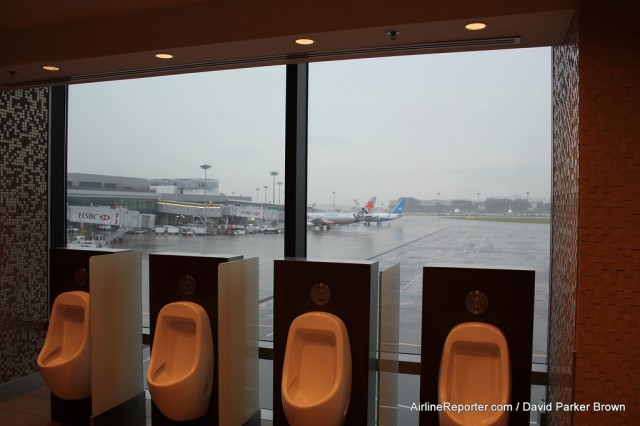 Probably the coolest restroom that I have ever seen

On top of all the impressive aspects of the airport, they do not forget about the AvGeeks. Each terminal as an indoor viewing area out to the apron. They might not be the best spotting locations, but they at least give you a view of the great eye candy. Terminal 3 also has a special Aviation Gallery which is worth checking out.

Even one of the men’s bathrooms (see above) has a pretty epic view. Don’t worry, that is mirrored glass on the outside.

Many might think I was crazy for never leaving the airport, but despite the fact that I was there for 30 hours and went to each terminal twice, I know I still missed out on quite a bit. I am not joking when I say that when you visit Singapore, make sure to save time to check out their airport; heck, maybe even spend a night at the airport.

If you have a longer layover and do not want to stay the whole time in the airport, you can get a free Singapore tour. 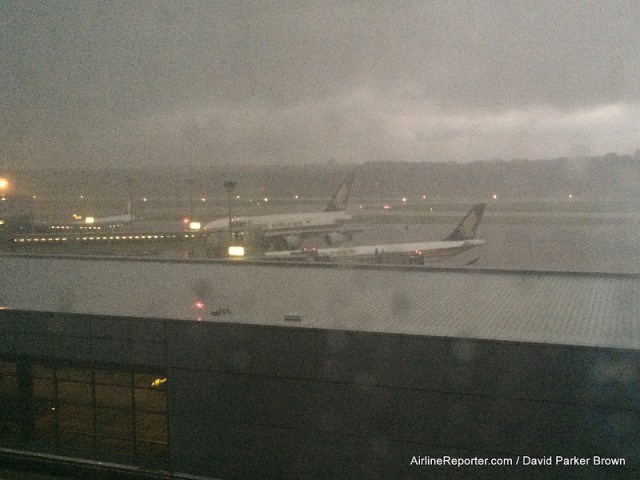 The weather was NASTY outside, but my flight left pretty much on time.

What was I doing this all for again? OH RIGHT! Taking the world’s longest flight.

After my tour of the airport, I headed to the lounge to get some work done before boarding my flight to Newark. You can read my super-documented live-blog of that flight and we will just fast forward about a full day in this story…

A NIGHT IN NEW JERSEY

Now, I do not mean any insult to those who might live in Jersey, but with my previous experiences at the airport and the surrounding area, I wouldn’t say that I had high expectations of good customer service. I was very wrong.

First off the U.S. Customs agent was nice – really nice. Although there are some gems out there, most of the time I’m made to feel like I am a criminal and not welcome in my own country. This officer was friendly, welcoming, professional, and even cracked a smile – go figure.

After getting through customs, my next goal was to find my airport shuttle. I expected that it would be nearly impossible since I remember signage was not the best at EWR. Coming around a corner after leaving customs I was welcomed by a smiling gentleman in a red jacket. My first thought was, “what is this guy selling?” 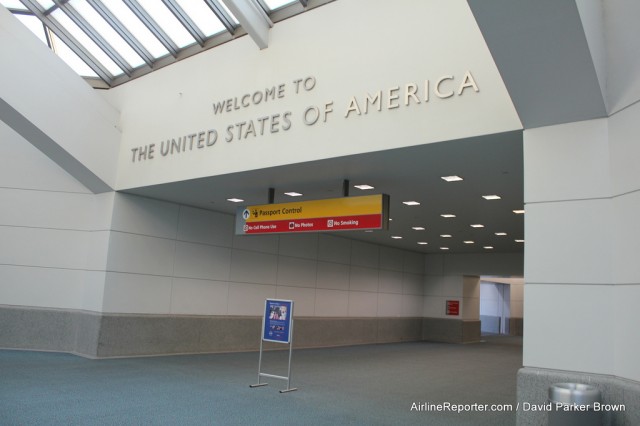 Back to the ‘ol U.S. Jersey had a few surprises for me.

Turns out he was airport staff and explained that I need to go down a hallway, up some stars, on a train, and to Parking P4 – all with a genuine smile.

Although the signs were quite pointless, at every intersection there was another smiling person in a red jacket that was happy to point me in the correct direction. I honestly felt like I was in some twilight episode since I don’t think I have ever seen so many friendly and helpful airport staff. A huge cheers to EWR!

Soon I found my shuttle; after getting to my hotel, I finished up some blogging, got a few hours of sleep, and was back up at 2am due to jetlag. I got ready to head back to the airport [the hotel was worth the money just for a shower].  I ended up taking the scariest van ride in my life to the airport (yay Jersey drivers), but I arrived in one piece, although a bit shaken (I was riding in the front seat).

Being a bit out of it, I ended up leaving my laptop with big #AvGeek AirlineReporter.com sticker on it at security. It took me about 15 minutes to realize and when I returned to get it, one of the TSA agents said in a loud Jersey accent, “Hey we gots the Airline Reporter guy here who left his laptop. Be sure to write good things about us.” As I blushed in embarrassment for being called out, I was once again pleasantly surprised how nice the TSA agents were. 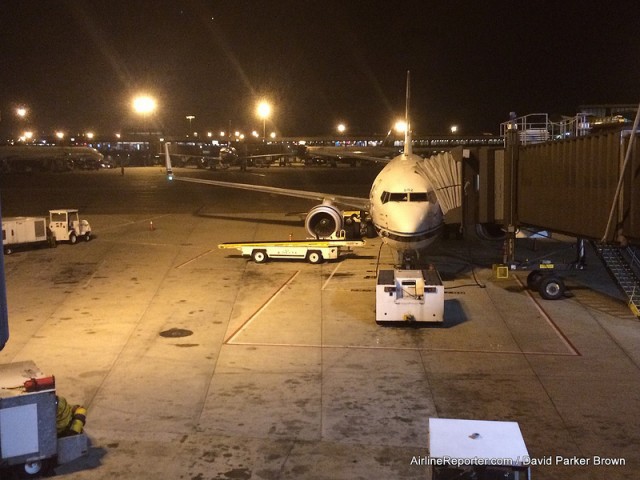 Time to board my flight back home on Alaska Airlines

This is where things start to get a bit more blurry. I remember sitting at the gate waiting to board. I remember boarding the plane. I remember finding my seat (WAAAAY in the back, but a window seat) and then… Well. Waking up almost 6 hours later as we started our descent into Seattle. Amazing how taking the world’s two longest flights can mess with your sleep schedule. 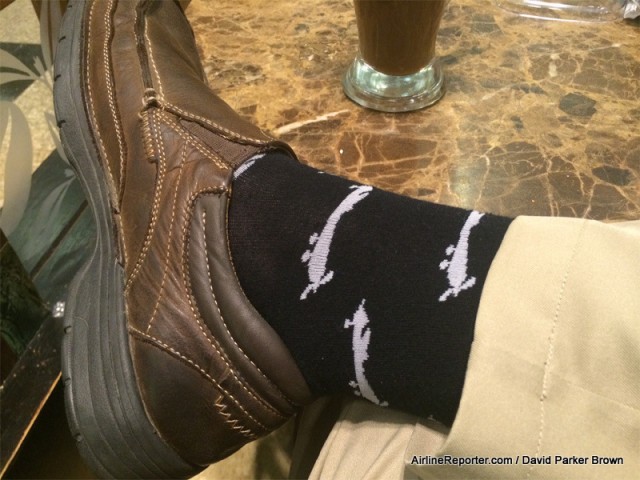 To celebrate taking the world’s longest flight, I wore my airplane socks that my mom got me. Make fun all you want.

What a ride! I was happy to be back home in Seattle, but my mind was a blur for the next few days. It is sad knowing that the LAX-SIN and SIN-EWR flights have stopped being offered, but you can still get to Singapore on an Airbus A380 via Tokyo and Frankfurt.

Would I do it again? In a heart beat. Well, maybe if you asked me once I finally got back home, I might have groaned, but now, with some time on the ground, I am ready for more.

I know that many of you have also been able to experience one of these flights and it is pretty darn cool knowing our memories will be going down in history. Sure, more efficient aircraft like the Boeing 777X or the Airbus A350 might allow uber-long-haul flights like this to be feasible in the future, but who knows.

A HUGE thank you to everyone at Singapore Airlines, Changi Airport, and all the rest that helped to make this one amazing adventure that I could share. The planes and flights will be greatly missed!

NOTE: Singapore Airlines provided my LAX-SIN-EWR flights and accommodations in Singapore. All opinions are my own.