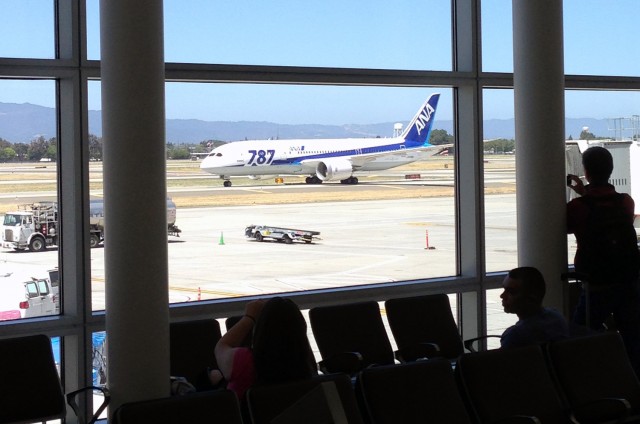 An ANA Boeing 787 Dreamliner pulls up to the gate at San Jose. Image by Blaine Nickeson.

THE ANA 787 DREAMLINER RE-INAUGURAL AT SJC

Through some matchmaking by David Parker Brown (@ARdpb), I was paired up with Mal Muir (@bigmalx) and Jason Rabinowitz (@airlineflyer) as soon as I landed in SJC; they were there as guests of ANA to cover the flight.Â  They promptly threw me to the wolves of local media, where I was asked to rationalize my decision to fly just for the purpose of flying; no such luck!

BONUS: San Jose to Tokyo on the 787 Dreamliner

Mal and Jason took part in the media festivitiesÂ while I hung back and took it all in.Â  Within moments, our bird was arriving to great fanfare at the gate.Â  With the media events over for a few hours, I was guested in SJCâ€™s new lounge by Mal, where I got to meet some other participants.Â  In no time, we were ready to board. 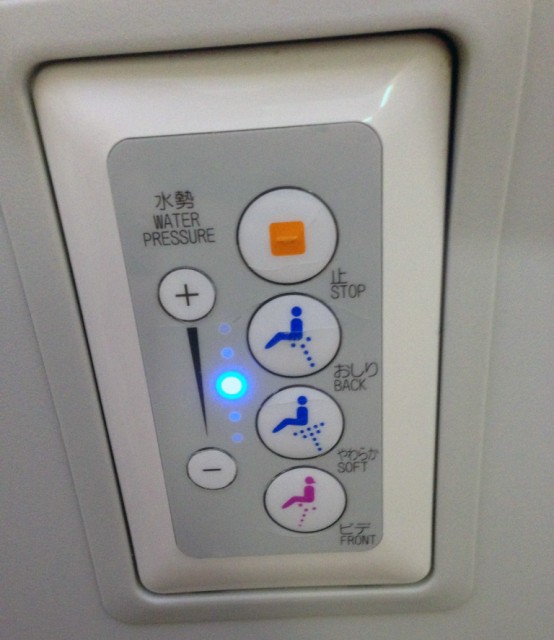 So many choices in the 787 lav. Photo by Blaine Nickeson.

The Dreamliner, particularly the ANA flavor, blew away my high expectations.Â  I was in an aisle seat on the side 2-seat pair.Â  The flight was comfortable, quiet, and I arrived to NRT feeling fresh (the last time I would feel that way for about a week). Â

There are two fun features worth mentioning on ANAâ€™s Dreamliner.Â  The first is the seat-to-seat text messaging, which Mal took advantage of it to taunt me share the details of his business class experience.Â  The second were those fancy robot toilets; I felt like Mater in Japan (again, I have toddlersâ€¦).Â  After a few glasses of wine, give it a try!

Once arriving at Narita, I was able to accompany the press group in to the ANA Lounge.Â  The highlight of the lounge had to be the beer robot!Â After some tasty sushi, I bid farewell to Mal and Jason for my onward journey to Singapore.Â  After a long walk to the gate, I boarded a pmCO 777.

I found my window seat in the exit row (great plane spotting at each airport!) and then attempted to sleep for a bit of the 7 hour flight, with little success.Â  I just canâ€™t sleep on planesâ€¦well, at least not in economy. 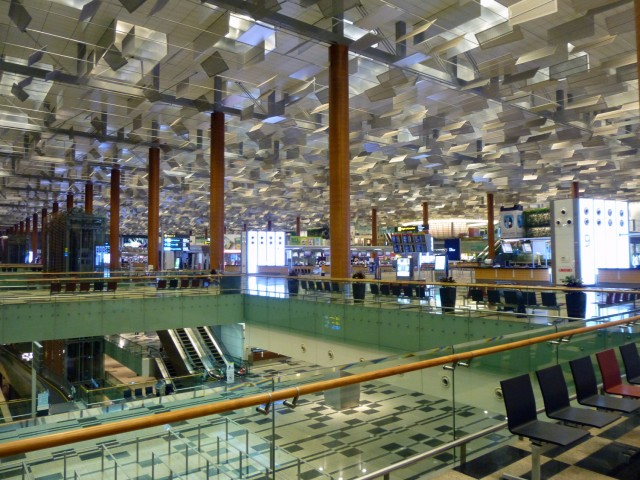 I arrived at Singapore Changi Airport (SIN) at about midnight local time and caught a 30 minute cab ride to the Hilton on Orchard Road; the high-end shopping district with lots of western hotels.Â  You could easily take the MRT (subway) from the airport, but it doesnâ€™t run between midnight and 5am.Â  After a quick FaceTime date with the family (it was 11am at home), I took an 8-hour snooze and then headed out to see the city for the day.

This was my first time in Singapore (and Asia), so let me share some basic observations.Â  Itâ€™s a great first destination for Asia, especially since English is the primary language.Â  The variety of food and drink is fantastic â€“ I had both croissants and spring rolls.Â  Itâ€™s hot and humidâ€¦really humid.Â  Bring about 20 extra pairs of socks and underwear.Â  Itâ€™s also impeccably clean; I would have eaten off the subway floor.Â  Keep in mind this is due to the extremely strict laws â€“ the customs forms even say â€œImportation of Drugs to Singapore is a Capital Offense.â€Â  Spitting, smoking, and jaywalking are also all punished.

BONUS: How to Visit Singapore With No Clue

I made my way to the Singapore Flyer, the largest ferris wheel in the world and the views were amazing!Â Â However, the best view had to be the 3 F-15â€™s that did a fly-by while I was at the top! (sorry, no picture).Â  I spent the rest of the day wandering the city and eating and drinking locally before heading to an early bedtime. 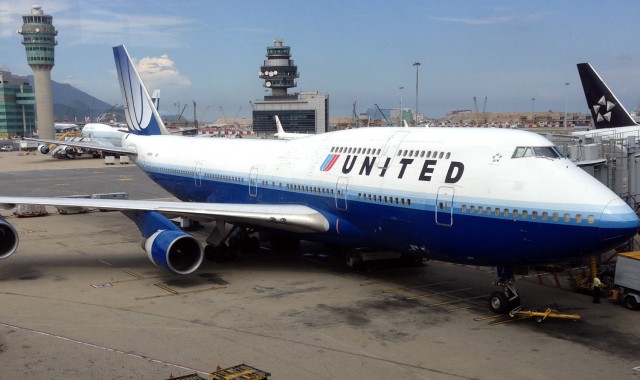 At 3am, I was up again, headed back to Changi airport.Â  If you havenâ€™t heard, the airport is just amazing!Â  Changi has everything from a movie theater to a butterfly pavilion.Â  Soon it was time to board my (half-empty) pmUA 777 for the 4-hour flight to HKG.Â  In Hong Kong, I boarded a United 747-400 that was built when I was in the 5th grade.

It had the old UA livery (or what was left of it, given the peeling paint).Â  United really needs to come up with a fleet replacement plan for these old birds; Iâ€™d love it to be the 748, but maybe launch customer on 777X?Â  The capacity is obviously needed, as the load factor on this flight was 100%.

After the 12 hour flight and my arrival in SFO, I really began to hit the wall.Â  I zombie-walked my way through immigration (the CBP Agent asked me if I had been in Japan, Singapore, and China for pleasure, to which I replied, â€œsort ofâ€ â€“ he didnâ€™t even blink).Â  A quick UA 757 flight home to Denver, and I arrived back at DEN 77 hours after I had left.

In future years when I tell this story, I donâ€™t think Iâ€™ll remember how tired I was, but only the amazing experience that I had.Â  My only regret was that all 6 legs hadnâ€™t been operated by a Dreamliner. (Well, that and the fact that I wasnâ€™t on the media trip, after reading all the tweets about spas, helicopter rides, and 5-course meals!).Â  This wonâ€™t be the last time I do something like this.

Rock and Roll: More Options for an Electric Ground Taxi System
How I Flew Round-Trip To Florida on JetBlue For Only $1.99
13 Comments

The Beer Robots are coming to the U.S. – first to NYC and then…
Frozen foam is really an amazing creation and keeps the beer so cold.

Too bad your budget was a constraint. Otherwise, you could have been on a dreamliner flight from Tokyo to Singapore as well.

JAL also has the most international dreamliner flights among all 787-owning airlines. Yesterday at some points in time, there were nine JAL 787s in the sky simultaneously, though one of them was on a delivery flight from Paine Field, WA.

How much was the ticket for that routing?

Nice story, Blaine…very informative. To be honest, though, I’m mostly shocked DEN never had a direct-to-Asia flight before now; for some reason, that’s really surprising to me. Perhaps I’m spoiled by all the offerings at DFW, my home airport. I’d think that Front Range market can keep that DEN-NRT bird full…

Best quote of this article:

So as one of Blaine’s close friends (Who lives in Seattle; where his 787 was built), he also tried to convince me on his crazy 77 hour extravaganza; however, my wife, unlike his, is not so accommodating…

Maybe next time Blaine, when the 777X rolls out…

Great article sounds like you had a blast! @ Mike H: Denver didn’t have the service because they didn’t have the passenger traffic to fill the planes needed to travel that distance and make the route profitable. That’s one of the reasons that the 787 is such a game changer. Richard D : Although United has ordered 25 a350 plus five options I do believe that they are doing most of their fleet renewal with the 787 has the have 65 on order with 20 being for the 787-10 that was announced at Paris Air Show. They are the launch customer for this aircraft (787-10. There is speculation that they will be a 777x launch customer….we shall see.
One last thing..I’m so glad to have found this website! I am a rabbid airline/plane geek and its great to see there are plenty of other people who are also!!

Awesome story! I am currently doing a similar trip of my own, people think I’m nuts! Sydney – Singapore-Bangkok-Kuala Lumpur – Sydney in 4 days! In a mixture of classes and airlines.. Tomorrow’s flight is Bangkok to KL on Lufthansa Business class (yep – nothing better than cheap ticket in a premium class between destinations that the airline is not from!)

Freakflier – have an awesome time. Sounds like my kind of adventure!

Lovely blog … glad that you took the opportunity to fly more (beyond Tokyo) to Singapore in order to pay less. Indeed it is illogical but I am glad you did. Happy to hear that Singapore has left a positive impression on you.

JAL has three daily Dreamliner flights to Singapore from Tokyo (split between Handeda and Narita). ANA will from 1 December 2013 be flying the Dreamliner to Singapore too, initially on one flight and subsequently on all flights.

Between 20 October and 30 November 2013, we will be having the Dreamliner of Royal Brunei Airlines on the Banda Seri Begawan – Singapore route.

Hope your mileage run takes you back to Singapore again.