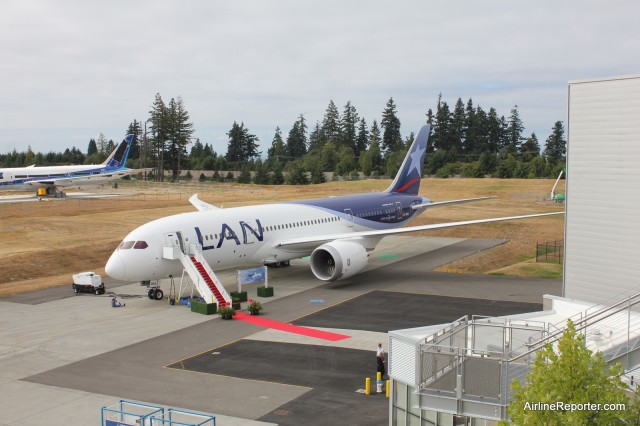 LAN’s first Boeing 787 sits next to the Future of Flight in Everett, WA.

LAN Airlines became the fourth airline in the world and the first in the Americas to take delivery of a Boeing 787 Dreamliner. Lucky for me, I was invited to tag along (Note: LAN flew me down to Santiago, back to Seattle and provided a hotel).

Even though the LAN 787 took off from Everett, WA (where it was built) on Friday, August 31st, the celebration started earlier. There were quite a few journalists from South America who were flown in on Wednesday and the celebration started with a dinner boat cruise. I might have lived in Seattle for 14 years, but the city’s beauty always amazes me. 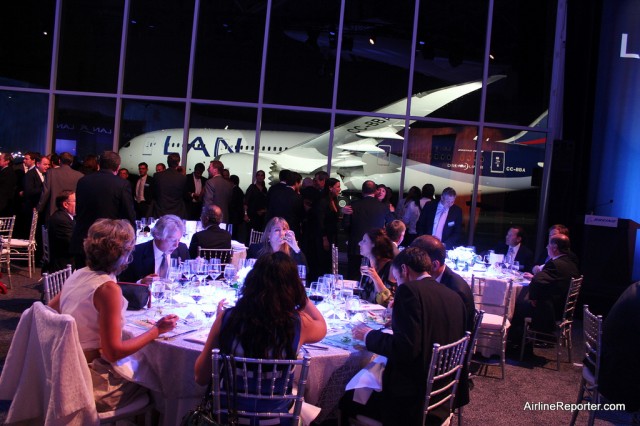 LAN’s 787 sits outside, while Boeing, LAN and media have dinner in the Future of Flight.

All day Thursday, media was invited to take a tour of the Boeing factory and get to know the surrounding area. I was not able to participate in the day events, but they were all things I have done/seen before. Not to say I don’t try to get back into the factory any chance I can.

Thursday night was the official delivery dinner, hosted by Boeing and took place on the gallery floor at the Future of Flight. Boeing always knows how to throw a celebration and this was no different. It was hard to recognize the gallery, especially with their white 747 being painted in LAN’s livery.

A movie was shown highlighting the development of LAN’s first 787. Upon conclusion of the video, the screen was raised, reveling the aircraft outside. Although media had a chance to go outside and take photos beforehand, this was the first time that most of the LAN employees saw their Dreamliner. The excitement is hard to describe. 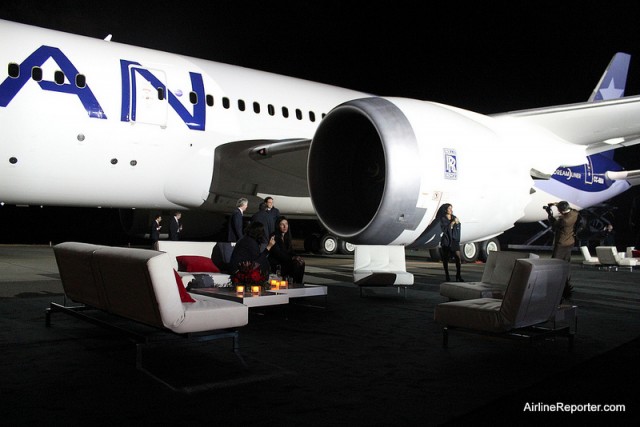 Totally a typical evening hanging out on couches, drinking wine, while under a 787 Dreamliner.

There were a few more speeches, which were almost all in Spanish, so I just clapped when everyone else clapped and smiled when I heard “siete, ocho, siete” (seven eight seven in Spanish).

After dinner, the large glass door opened and we were able to enjoy cocktails outside, next to the aircraft. Couches were set up for people to relax, but many chose to stand while socializing and gazing at the new plane.

I did not end up leaving the Future of Flight until almost 1:30am — like I said, it was a great event. A big bonus was that I didn’t have to be back to Paine Field until 10:00am the next morning. 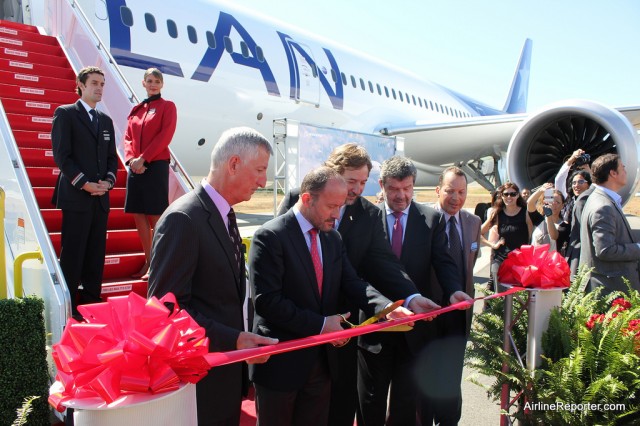 A delivery ceremony wouldn’t be complete without the classic ribbon cutting by executives.

Friday was the big day, but the delivery flight was not scheduled to depart until 5:00pm. Upon arrival, we had the opportunity to get on the plane and see the interior for the first time. Even though LAN’s new seating product had premiered on the 767 a few months prior, it was done more or less in secret and fully announced with the 787.

I felt very privileged to board my seventh Dreamliner for an interior tour (others: Boeing ZA003, ANA JA801A, ANA JA802A, JAL JA825J, Qatar’s 787, United N20904).  I was excited to compare. I have to say that it never gets old boarding a new Dreamliner and taking in that new-plane smell.

LAN’s entry way on the 787 wasn’t as dynamic as Qatar’s and a bit more like United’s. Sort of a mid-ground for providing a warm welcome, but not giving up too much space. LAN laid out the Business cabin in a 2-2-2 set up and the economy seats in a 3-3-3 configuration. I knew I was going to be spending about 12.5 hours in economy, so I made sure to check out the front of the plane as much as possible. 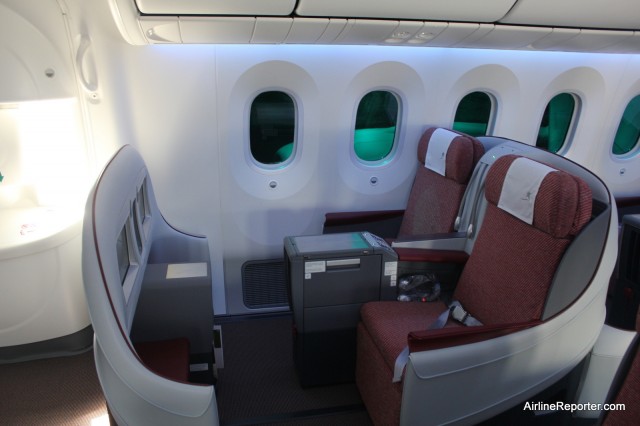 When I posted a photo on my Facebook of the new Business Class seats, many folks were not fans. Just like people, sometimes seats do not photo well. I think the one above captures the look of the new product much better than iPhone and Tweeted photos. I am happy to say that the product looks better in person than it does in even the higher quality photos.

Although the seats are interesting, I always enjoy checking out the areas that most passengers will never see: the pilot’s rest area above the cabin in the front, the flight deck and the crew rest area, which are upgraded economy seats.

Airline customers have the choice to offer a rear sleeping area for crew (like on United’s 787). LAN opted for economy seats, that can recline, in a 2-3-2 layout by the window, that are curtained off and have a separate lighting zone than the rest of the cabin. 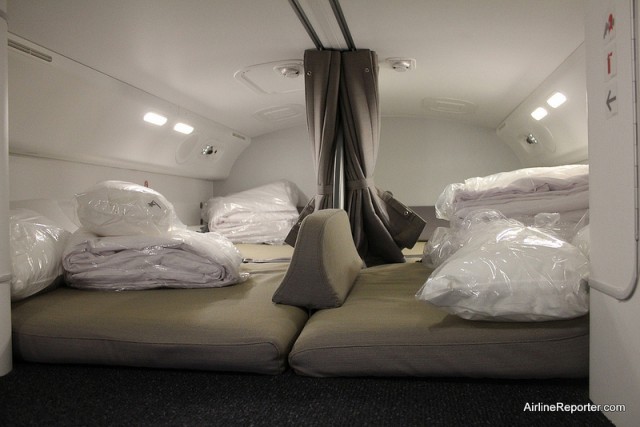 The pilot-crew rest area located above the main cabin, in the front.

After our interior tour we had about three hours to burn before departing Paine Field. My game plan was to work on the blog, while waiting for our flight to leave, but ran into a problem when trying to find my bag. I was one of the first to arrive at the Future of Flight (shocking, I know) and when I did, no one had put their carry-on bags down. The place where I put my bag (right by the security scanner) turned out to be the location for checked bags… oops. In my defense, there were not signs posted at the time. 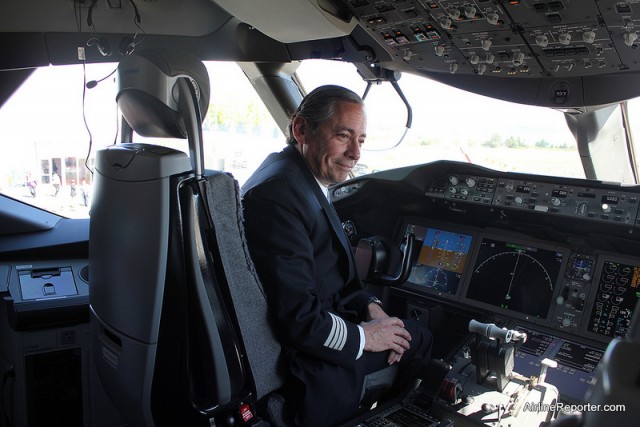 The best seat in the house.

After searching through all the carry-ons multiple times and not finding mine, I figured it was picked up. The problem was all the checked bags were already scanned, loaded into crates and secured.  I talked to three different people and two said there was no way could I get access to my bag and one said, “maybe.”

Luckily, I had my Passport on me, but my bag had my laptop and all my chargers for my phone and camera. I was nice and polite, but made it quite clear how happy I would be to have my bag.

About an hour later, a lovely woman came up to me saying that I could go with her to get my bag — I wanted to give her a hug. As an extra bonus, the bag search was down on the east-side of the airport and we were on the west side. I got to take a van ride around Paine Field and right down the flight line. Unfortunately I was not able to take photos, but I have the memories.

I am thankful I was able to carry my bag on, especially since my camera battery went out a few hours into the flight. Needless to say, that would have made PART 2 of this story very difficult. 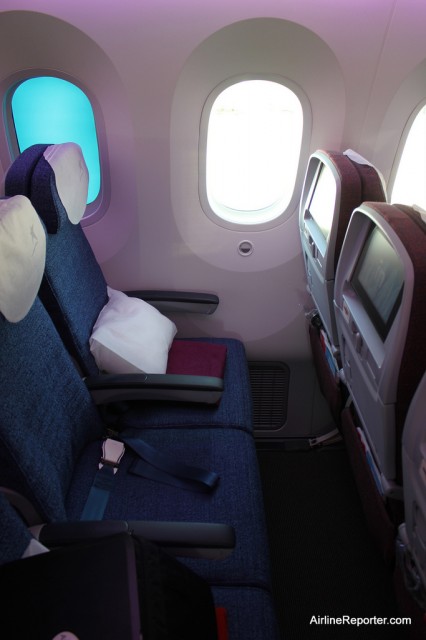 My seat was 15A, but I had the whole row for sleeping.

Shortly after fetching my bag, it was time to board. We each had hand written tickets (my name was wrong, but whatever) and went through Boeing security (kind of like TSA, but nicer). Then it was time to board, get settled in seat 15A and prepare for a 12.5 hour flight to Santiago. Being able to have the experience to fly non-stop from Everett to Santiago on a Boeing 787 Dreamliner was truly a dream come true.

https://www.airlinereporter.com
Classic Paris Air Show Video from 1967
A Confession: I Used My Passport For the First Time Ever in 2010
2 Comments

I like the look of economy. I know leather cleans better, but on a long flight, I prefer the feel of cloth.

Great story. Thanks for sharing. Wish I could have gone.