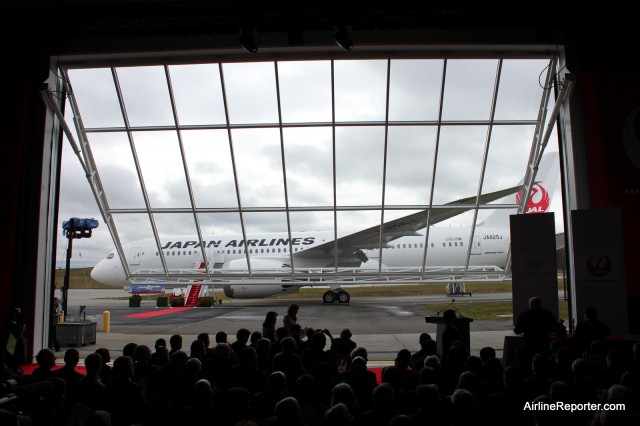 JAL's Boeing 787 Dreamliner is revealed to the crowd.

Yesterday, Â Boeing, Japan Airlines (JAL) and GE celebrated the delivery of the first and second 787 Dreamliner with GEnx engines to JAL.

“Today is an important moment in our 60-year relationship with Japan Airlines as we celebrate the deliveries of not one, but two Dreamliners,” said Jim Albaugh, president and CEO of Boeing Commercial Airplanes. “The 787 will provide the fuel-efficient airplane needed to serve Japan Airlines growing international operations.” 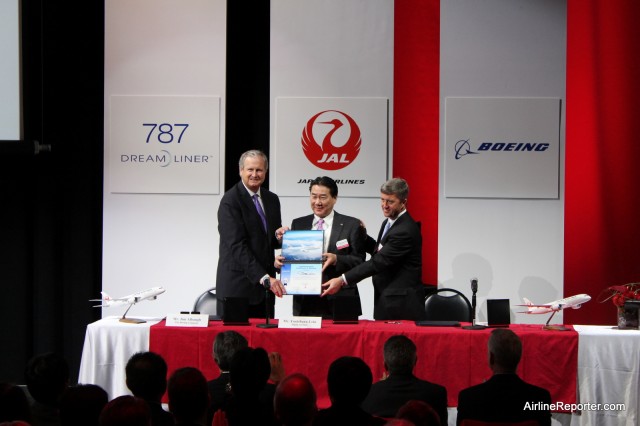 The morning started with a press breifing by JAL’s President, Mr. Yoshiharu Ueki and Mr. Tetsuya Onuki, Managing Executive Officer Corporate Planning. They discussed the importance of their new 787 aircraft and what they hope to accomplish with them in the future.

Ueki, who recently became President of JAL, was previously a pilot for 35 years, flying aircraft like the DC-10 and Boeing 747. He announced that JAL has decided up their order of the 787 by an additional 10, making their total order for 45 aircraft.

They are planning to take delivery of 25 787-8s and 20 of the larger 787-9. When asked when JAL hopes to received additional Dreamliners beyond the two yesterday, Ueki stated he is unable to discuss when that might be, but he did confirm that he was excited to take two aircraft. 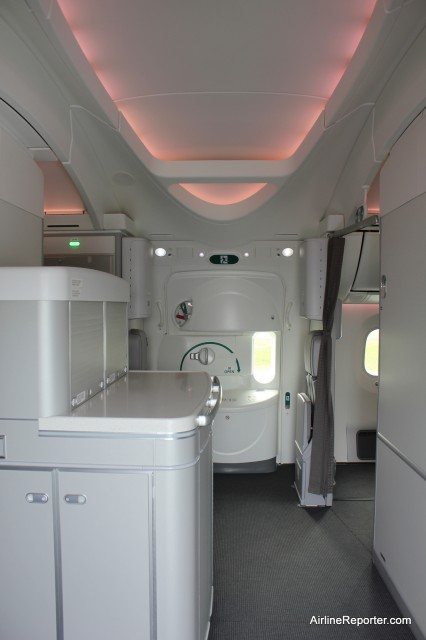 JAL's entry way on the Boeing 787 Dreamliner is quite welcoming.

JAL’s president explained the three main reasons why he likes the Boeing 787 Dreamliner: the fact it is a beautiful aircraft, the economics of flying it and the ability to fly long distances. JAL currently plans to only operate their 787s on longer range flights and there are currently no plans to use their 787s on domestic routes.

“JAL will be the first airline to start new routes that have never been flown before by taking full advantage of the efficiencies of this aircraft, starting with Boston service next month and San Diego later this year,” said Ueki. “The 787 with GEnx engines has the performance economics that JAL is looking for to ensure route profitability, and also the enhanced in-flight comfort that our customers will be delighted with.” 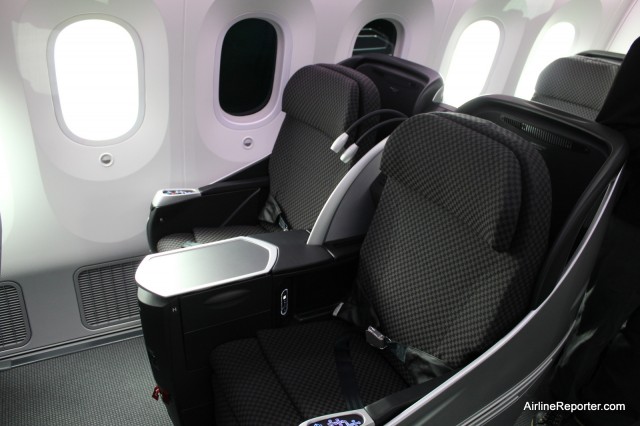 JAL's Executive Class on the 787 Dreamliner.

JAL is planning to launch a route between Tokyo and Boston on April 22nd, followed by a flight to San Diego, Moscow, Delhi and Singapore in the next few months. Â JAL will be the first airline to operate the 787 Dreamliner to the United States.

After the conference, media and guests were taken down the gallery at the Future of Flight, which was nicely decorated in a JAL theme. The facility’sÂ prominentÂ tail of a Boeing 747 had the red crane logo, along with large JAL logos on either side of the stage.Â Jim Albaugh, president and CEO of Boeing Commercial Airplanes, Mr Yoshiharu Ueki, JAL’s President and Bill Fitzgerald, GE’s Vice President and General Manager of Commercial Engines Operation all spoke about theÂ momentousÂ achievementÂ of delivering the aircraft.

Boeing was not afraid to admit that the plane was delayed and Albaugh went as far as to apologize to JAL. “We know we’re late in delivering this airplane, and we apologize for that. But we hope that when you start operating this airplane you’ll forgive us for the fact that it was late. We think it really will be a game-changing airplane for you.” 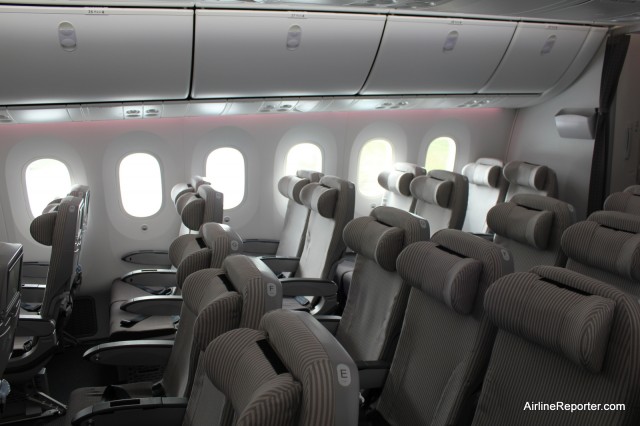 After Albaugh handed over two keys to Ueki (one for each Dreamliner), a video was shown highlighting JAL’s new 787 aircraft. As drums played in the background, the screen was raised and curtains were opened to unveil JAL’s first Dreamliner (JA825J).

After the ribbon was cut and executives posed on the stairway, it was time to climb on board and check out JAL’s interior for the 787.

The entryway to JAL’s 787 was very warm and welcoming. With the pink lighting and warm colors of the interior, it really had a much more cozy feeling to it than other airline interiors. JAL has configured this 787 to have 42 Executive Class seats in a 2-2-2 layout and 144 Economy Class seats in a 2-4-2 layout. 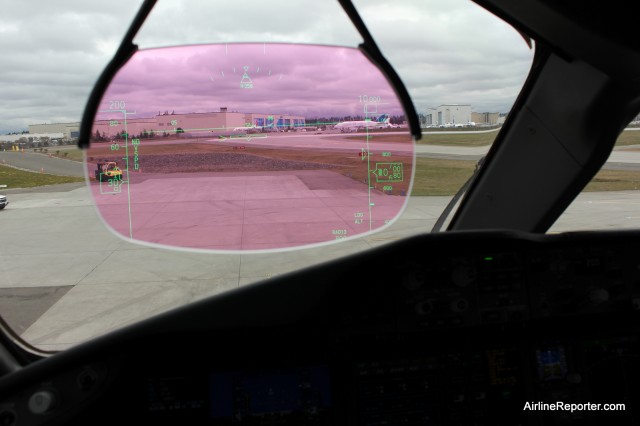 The Flight Deck has the best seats in the house. Shown here is the HUD (heads up display) with a JAL 787 in old livery and Dreamlifter in the background.

Of course, one of the benefits of the Dreamliner is the ability to produce different LED lighting schemes through out the flight. JALÂ demonstratedÂ some of their planned themes, including pink, peach,Â blue and green, which represent different seasons.

During my short time in JAL’s Dreamliner, the only thing that really disappointed me was that JAL opted not to place a window in one of the lavatories. Do not get me wrong, it is still a very nice and spacious restroom to be used at 30,000 feet, but there is just something pretty cool about being able to see the wing while using the bathroom. 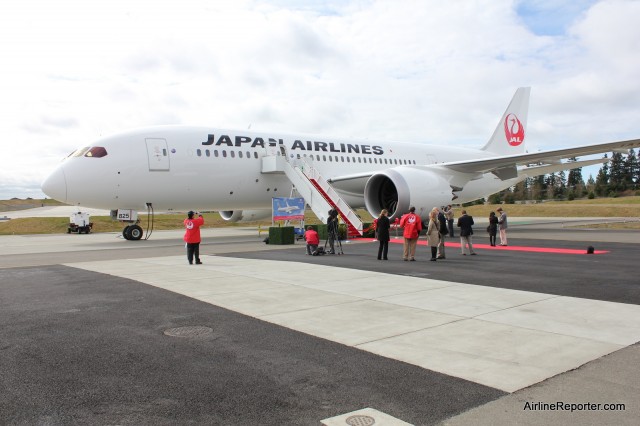 A few hours after this was taken, it was on its way to Tokyo.

The Boeing 787 Dreamliner is truly a game changing aircraft and I am sure many of us are waiting for additional airlines to start putting it into service.

ADDITIONAL JAL BOEING 787 DREAMLINER GOODIES:Â
See all 53 photos of the JAL Boeing 787 Dreamliner delivery
Video of take off, landing in Japan and more information from Boeing
Great undershot of JA822J during take offÂ

https://www.airlinereporter.com
Follow Along: The Delivery of JAL’s First (and possibly second) Boeing 787 Dreamliner
Airline Livery of the Week: Aerosvit and Their Bold Livery
5 Comments

That plane is sweet inside! When will it board it’s first passengers? Do you know?

The LED lighting is nice, but the entry area is far from “warm and welcoming.” It’s various shades of gray set off by metal and plastic. The passenger seats are dark. The cabin is devoid of color, save for the lighting. Neither the business nor economy seats appear to be all that impressive — nothing game changing at all. The whole thing looks like it was designed by a finance team taking a break from pivoting data cells in an Excel spreadsheet.

Of course you are entitled to your view. It’s likely however that you’re resentful or fearful of the 787s unique abilities and technological supremacy. If you’re an Airbus fan, you should be

What unique capabilities are those? You mean like in cold climates it has a shorter Hold Over Time so will likely have huge delays in freezing conditions.