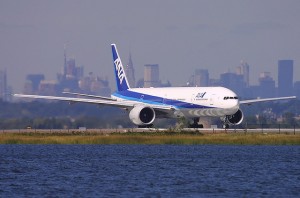 I constantly hear people say, “flying just isn’t the way it used to be.” Sure it isn’t, less food, more fees, but there are also lower fares. One service that we have seen a big decline in is food service. We have gone from getting a free meal to feeling lucky to have some free peanuts. Brett Snyder, who writes the blog CrankyFlier, took a look at the cost per passengers airlines spent in 1990 versus today and he found some pretty interesting things.

Take a look at Snyder’s awesome chart and some interesting observations on his blog.

Pretty clever WiFi logo with the dots for the i's being the engines! Logo from Alaska Airlines.

Blogging about airlines adding WiFi to their fleet will never get old for me.

If you remember Alaska caused a bit of a stir after announcing they would be going with Gogo Inglight Internet service instead of Row44, which they were testing. One of the benefits of Gogo is it can be quickly installed onto an aircraft. Alaska already has six planes internet enabled and hopes to have all Boeing 737-800’s and 900’s equipped with WiFi by the end of the Summer. Their entire fleet should be setup by the end of the year. Like other airlines, Alaska will have a WiFi logo by the main cabin door and information in the seat back pocket next to you.

In a partnership with Alaska Airline’s Visa credit card, they are offering the WiFi for free until July 31, 2010. After July 31st northbound flights from Portland and Seattle to Alaska will remain free, until GoGo Inflight is able to improve on cell reception in Alaska. After the free period, prices on other flights will range from $5 to $13 depending on the time and device you want to use.

To find out where WiFi can be accessed, more information and pricing structure, check out Alaska’s Wi-Fi page.