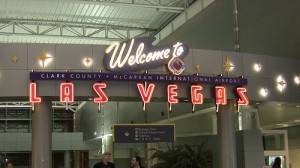 Ah Las Vegas. Gambling, fancy hotels, bunch of college students and of course alcohol (ok the list could go on and on, but we will stop with that). Remember in the olden days how you had to wait to get to downtown before getting sloshed? That time between your buzz wearing off from your $6 beer from the plane and having to take a cab all the way downtown? How many times have you been waiting for your bag and thought, “dang, I sure could use a Jaeger shot right about now.” I know…LAME! Well have no worry — the Vegas airport is here to help.

Steven Sisolak, a Clark County Commissioner stated, ’œOh, I know it will be a gold mine for some liquor store, but does this mean we’ll do anything for money?’

Seriously? Does this guy know Vegas? It is based on making money! He continues, ’œWhat’s next? Airport strip clubs? Topless bars? Is that appropriate for county property? I mean, that’s ’˜out-of-the-box’ thinking, too.’ Maybe, but really alcohol is already served on planes and in bars, is a liquor store really that much of a jump?

Sisolak also states he is worried about travelers drinking the alcohol in public and having public drunkenness. But isn’t that pretty standard in Vegas, people walking around quite buzzed with a drink in hand?

The airport is hoping this might bring in some extra cash. “We’re strapped for cash just like every other county department, and because of the smoking ban our gaming revenue has gone down and advertising has been a little slow,’ said Elaine Sanchez, airport spokeswoman. ’œWe believe, in hard times, this is a good idea.’