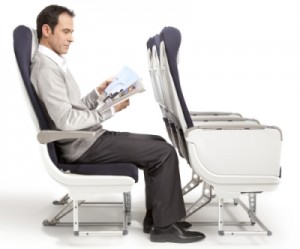 Dan Webb over at Things in the Sky took a look at Air France’s new, thinner seat to use on short haul flights. They are lighter, take up less room and are not as comfortable. That is why Air France is only installing them on their 37 all-economy Airbus A319/A320/A321 fleet.  The extra room will allow the airline to install an extra row in the A320 & A321, but the A319 will keep the same number of rows.

The seats will not recline, but they will increase leg room 2-3″, which is always a nice thing. They will start showing up in aircraft starting at the end of the month and will slowly make their way to the entire A320-family fleet.

Check out Webb’s blog for more photos and information on the seats. Be sure to check out the picture of the separate cup-holder — which is a genius idea!

I’m a fan of lightness and legroom. I’m all for it.