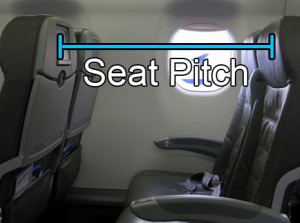 Is that really how pitch is measured? They should call it something else, because most uses of pitch would be from, e. g., back-of-seat to the next back-of-seat.

“Seat Pitch is the distance from any point on one seat to the exact same point on the seat in front or behind it.” — I am gonna put that quote in the photo caption I think.

It was hard finding a good photo with a good side profile. A few lame stick figures out there, but gives you a good jist. Bigger is better 🙂

While I have never measure seat pitch before on the airlines I fly I cant imagine losing 2″s As it is being 6’2″ with a 36″ inseam my knees already seem to be within an inch of touching the seatback on normal coach planes.

True. It matters a lot to me. I normally have my little netbook when flying and those extra inches being a heavier 6’1″ guy really makes a difference.

But I think most passengers care while flying, but at that point it is too late. I don’t think most look at seat pitch when buying tickets.

It’s important to recognize that some layouts gave a couple of short pitched seats to squeeze an extra row in due to the way all the items in the layout work together. So an airplane could be mostly 30 or 31 but have a few at 29. Very different than a whole airplane at 29 (or worse)

You make a VERY good point. I have gone through and notated the airlines that have a range. But most of the range is just one inch, except for Monarch’s Boeing 757, which is 28-24″ which is a huge range.

If I recall correctly, I think Tiger Airways of Singapore was pretty tight on their A320. They’re configured for 180, and had a pitch of 72.5 cm (about 28.5″). Tight squeeze! So, when I flew back from Phuket to Singapore, I made sure I checked in early enough to grab the exit row. I see nowadays though, they have a seat selection and for another S$25 (US$18.20) you can get the exit rows of 97.5cm or just over 38″

The Ryanair thing completely took me by surprise. I would’ve expected them to have 19 inch pitch or something like that. Yes, I’m exaggerating.

The Finnair 757 are for charter use only – that’s why the seat pitch is so minimal.

Ah, that makes sense then!

Well, I must be really sad cause i ALWAYS check sites like seat guru for pitch etc, I also look at airliners.net for interior pics of potential flights to see what it may be like. I do my homework even checking best seat if overhead monitors only (so not to be too far away!!).

I like to be prepared and have never had a bad flight (in economy) because it matters to me so i find doing a bit of ‘homework’ does pay off.

Another thing i will never pick a single aisle plane if i can get a twin aisle even if i have to adapt a bit, too claustrophobic etc, etc,.

Finnair truly does have a lousy seat pitch on those 757s!

Seat Pitch is the sound passengers make when complaining about the small space between airline seats…
http://www.thrombyair.com/2011/02/seat-pitch/

I got this info from SunExpress. (Lufthansa & Turkish Airlines cheap flight company based in Antalya):

Here is the seat details below,

I fly Ryanair regularly as my local airport has not many options. Usually short haul flights and itÂ´s not a bad experience. While I wouldnÂ´t choose it compared to others, their pitch is standard or comparable to others in the sector.

I can usually fly economy, but not on Condor. Different sites list them as having either 30 inch or 29 inch pitch, depending on the aircraft. The 767 on which I flew to FRA from SEA was so excruciatingly uncomfortable that I coughed up 199 euros for an (available, for which I was grateful) premium economy seat, so as to be able to have my knees function on arrival. Without measuring, but based on a life of flying, I think their seat pitch on this aircraft is about 28.673 inches. Beware of Condor.

Don;t forget QANTAS with only 76 cm pitch on their 737 economy seats